Qiantang River has what is reckoned to be the world’s largest tidal bore. As the tide rushes into the mouth of the river from Hangzhou Bay, the natural phenomenon can see waves rise to a height of up to 9 meters.

The tides attract thousands of visitors and are best viewed in September, when they are at their highest.

However, they rise twice a day all year around and can be a potential danger to the public at any time.

Fu Jianwei has been striving to improve safety on the river for more than 13 years.

The 57-year-old leader of a team which patrols its Pengbu section. Fu and his colleagues inspect its dams every day to prevent potential dangers because of the tides.

“Out-of-town people know nothing about the Qiantang tides. They often believe they can run away when the tide is rising. Actually, they can’t, because of the strong waves and large swings,” said Fu.

Last month, three people were swept away by tides on the Xiaoshan District section.

Fu Jianwei is on patrol along the Qiantang River.

One of them died while the others managed to survive.

“Strolling along the dam would be fine. But some people go down to the dam and think it will be safe when tides are low. In fact, Qiantang tides rise so quickly that people are always too late to get out,” Fu said.

Fu’s team has eight members who work with government officials and river police to form a monitoring network on the Pengbu section. The team is in charge of 5 kilometers between Qibao Town and Qianjiang No. 2 Bridge.

It takes at least two to three hours to inspect the whole section and they patrol it twice a day.

On August 2, 2007, about 30 people were swept away by tides and 11 of them died. Five days after that the Pengbu section patrol team was established.

“The sense of responsibility is the key to our work. Today, accidents are fewer than in previous years. It doesn’t mean we can let down our guard,” Fu said.

The average water level of Qiantang River is around 4 meters. Two years ago, the water jumped to 7.2 meters in summer due to a typhoon adding its weight to peak tidal forces. 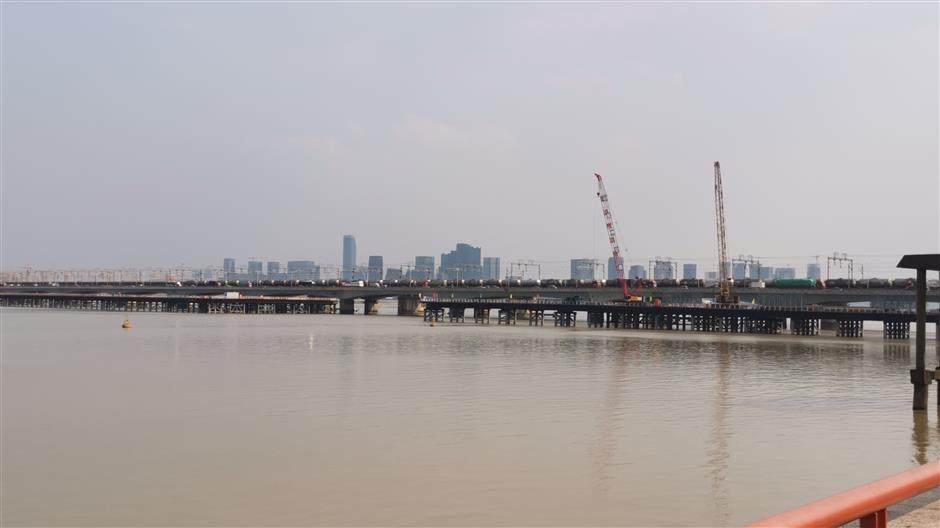 Qiantang River has the largest tidal bore in the world.

“The tides breached the banks and surged over Zhijiang Road. About 400 police officers sealed off the road, stopping people from entering. Our watch house was nearly immersed,” Fu recalled.

Usually the largest waves appear in the first and third weeks of every lunar month.

About 100 years ago, Hangzhou citizens built T-shaped dams that stretch into the river, in a bid to lower the tidal speed and strength.

It has been calculated that the average thrust per cubic meter of water reaches 7 tons. The waves can easily sweep an adult away if he stands on a T-shaped dam.

“Sometimes people are fishing on a T-shaped dam when it is exposed in low tides. We have to call them back. If they refuse, we will call the police,” Fu said.

Hangzhou citizens began to harness the river from the Five Dynasties and Ten Kingdoms Period (AD 907-979).

According to excavations by the Hangzhou Institute of Archeology, a flood wall was built between the river and the city wall.

Due to the spectacular tidal bores and special soil texture of the Qiantang River, Hangzhou’s old flood wall was built on a mudflat.

The kingdom also established the Liuhe Pagoda beside the river to “calm” the tidal bores. The wood-and-brick pagoda’s name means “six harmonies.”

Viewing the tides has been a tradition for centuries and could date back to the Southern Song Dynasty (1127-1279) when Hangzhou was the empire’s capital.

The tradition is still popular with tourists. In its efforts to protect the public, every year the Hangzhou government dispatches a large number of police officers to guard viewing spots along the river.