From a white box to wow thanks to lived-in project

The rather low-key 46-year-old homeowner gives all the credit to his interior designer Bhavin Taylor.

“I loved the style of his work and how each project had a unique and lived-in feel,” Parker said. “The spaces felt personal and comfortable so he was the first person that came to mind when I decided to take the plunge and redecorate.”

His design brief was clear — a lived-in, warm feel that was evident in all his other projects.

And the homeowner also wanted to see what the designer could bring to the table.

“I wanted a decor that reflected my personality and taste but was also functional,” he said.

When Taylor saw the two-bedroom flat in Wandsworth, South London, it was a new built white box that hadn’t been touched since the property was built.

“I loved that it was a blank canvas and that it was really bright because of the large windows, which meant that I would be able to inject some personality into the space,” Taylor said. 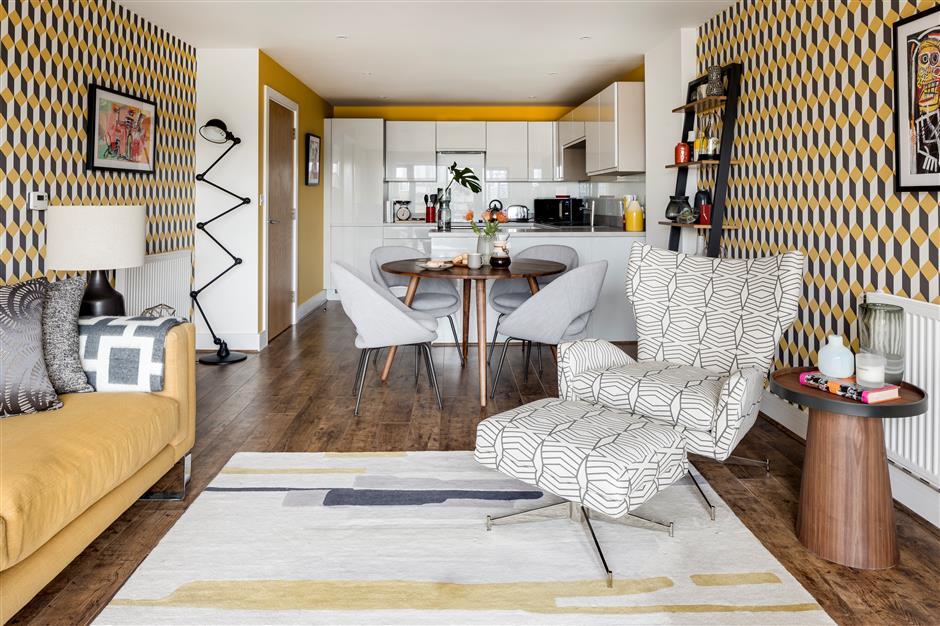 Plenty of colors and patterns have been injected into the living room.

In terms of changes, this project was all about turning a bland white box into one that was bursting with personality, so injecting color and pattern was key. It took six months to complete the renovation work.

“The way I approach this, and all of my projects is to bear in mind my business motto of ‘love color, embrace pattern’ and how I can apply this to suit each client,” he said.

“In this case the client had asked for a ‘lived-in feel.’ I instantly knew that to elevate this plain white box, I would have to inject bold patterns using Cole & Son wallpapers as well as rich colors.”

For the living room design, the client already owned a rug and had asked Taylor to incorporate this, so naturally this was the base for the scheme.

“I knew that I wanted to add wallpaper to the room and sourced Cole & Son’s Delano wallpaper, that came in a color way that matched perfectly with the tones of the rug,” he said.

“The strong geometric pattern of this wallpaper was definitely going to inject some bold character to the room, so I decided to have it hung on the two opposite walls.”

Taylor wanted to achieve another layer of impact to the space, so selected a custom sofa in mustard fabric adding a bold splash of color.

“So far there were already two elements of pattern from the rug and wallpaper, but I didn’t want to stop there,” Taylor said. “I continued to inject pattern in the cushions, throw and armchair, but this time picked up the charcoal tones from the wallpaper and rug. 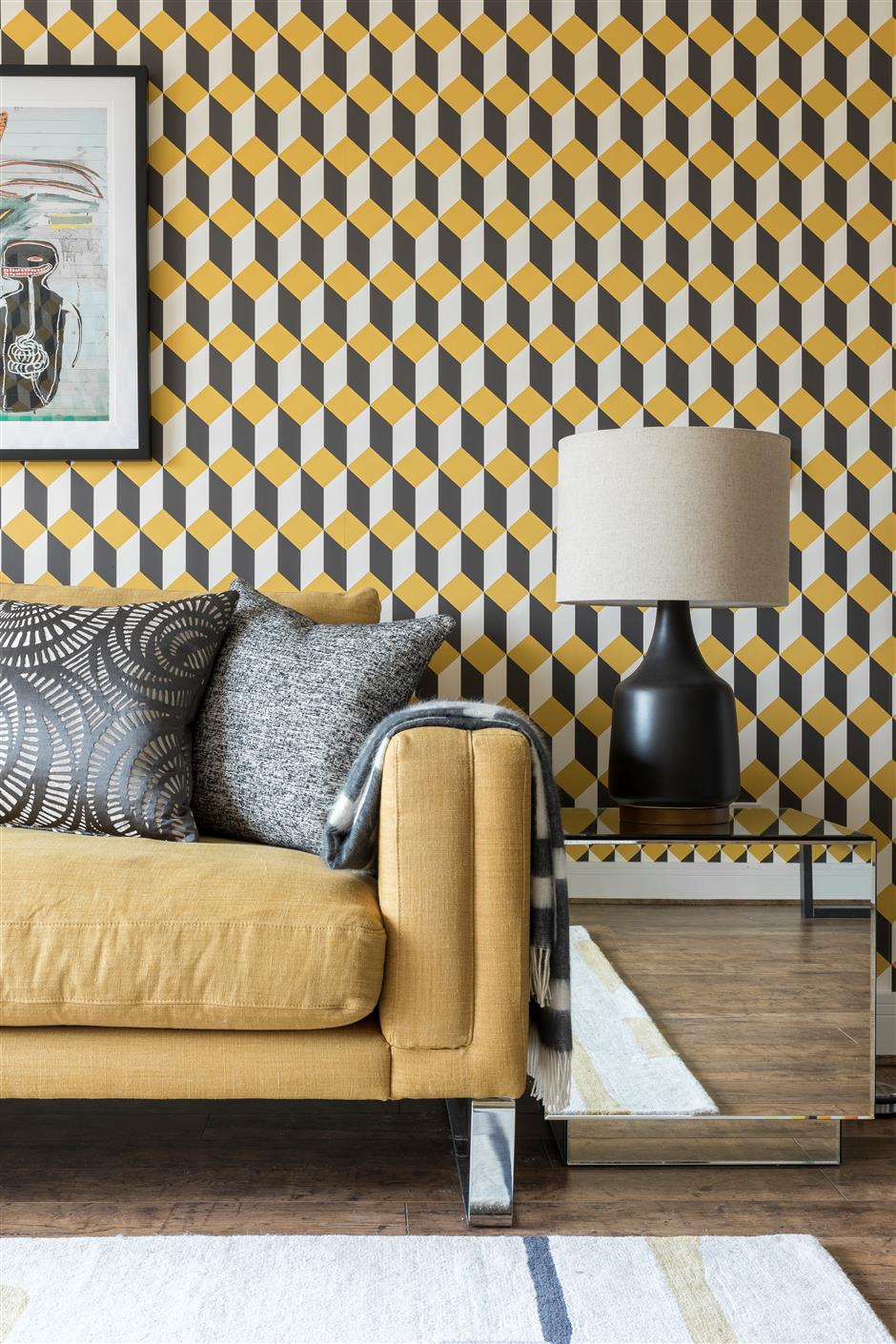 A custom sofa in mustard fabric was added to give a bold splash of color to the living room.

“When doing a bold scheme like this, sticking to a limited color palate helps to create an element of calm and harmony to the space.”

To give a warm feeling, warm wood tones were introduced that help to ground the room. The walnut dining table has been teamed up with light grey dining chairs to reflect the light grey kitchen cabinets and softer tones of the rug.

To complete the room the wave sheer curtain was added as a modern way to create privacy but still allow all that natural light to flood in.

In the bedroom the designer wanted to create a calmer atmosphere, but still inject some bold personality. Taking inspiration from the warm wood tones of the living room, he chose Cole & Son’s Puzzle wallpaper that had a strong geometric pattern but with an element of calm that would be the perfect backdrop for the room. The warm tones of the wallpaper are picked up in the furniture and window treatments which help to create a relaxing vibe.

The addition of the navy blue carpet and accessories help to lift the room, but still maintain a calm and restful environment to sleep in.

Taylor loved the fact the client’s style allowed him to do what he does best and inject plenty of color, pattern and personality turning a characterless space into a home that feels warm, inviting and relaxing. 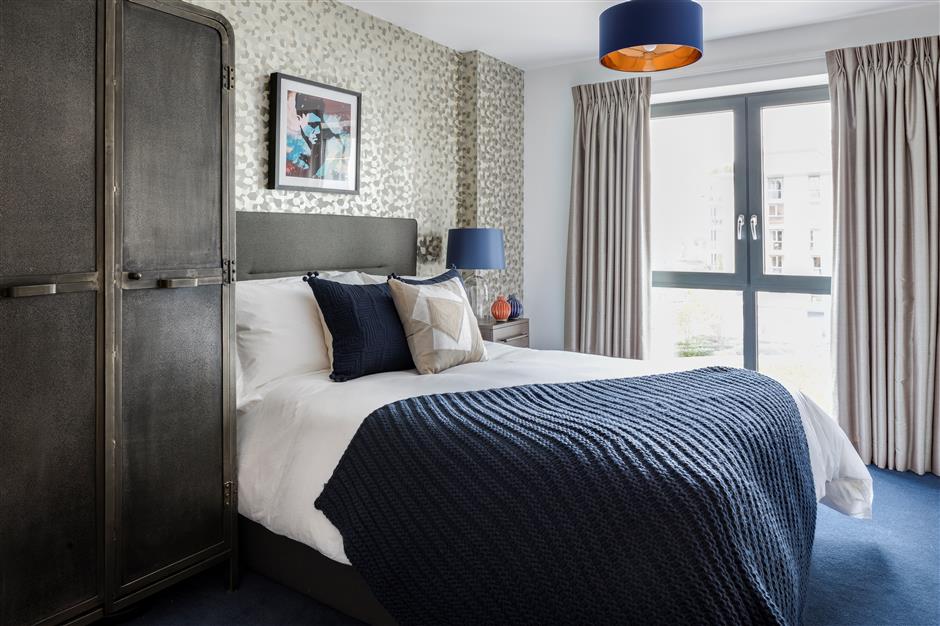 A calmer atmosphere is created in the bedroom with warm tones.

“The living room really sums up my style,” he said.

Homeowner Parker said what Taylor achieved was exactly what he was after — a complete, considered space that feels like home. “He introduced color and pattern in a way I wouldn’t be able to do on my own,” Parker said. “He really encouraged me to take a step with bolder design decisions that have maximum impact yet are still in keeping with my own personal style and taste. It’s a space that I’m now proud to show off.

“Ultimately you want a space that when you open the front door you feel a sense of ‘I’m home.’ It should be a place where you can relax after a busy day, somewhere you can entertain and invite people over, and a place that gives a sense of the ‘wow’ factor every time you sit down.

“My home now does just that.”

Special Reports
ADVERTISEMENT
61762
,
Guide for overseas Chinese students during COVID-19 pandemic
A cemetery that celebrates life and death
Nile threatened by waste, warming, dam
Enchanting abode in idyllic tranquility
Connecting nature, culture and people with design
Fancy footwork: An embroiderer finds her niche
How overseas Shanghainese go through outbreak
Counseling eases psychological toll of outbreak
'Support troops' guard the doors to the city
A guardian of the light ... and of hope for Wuhan
EXPLORE SHINE