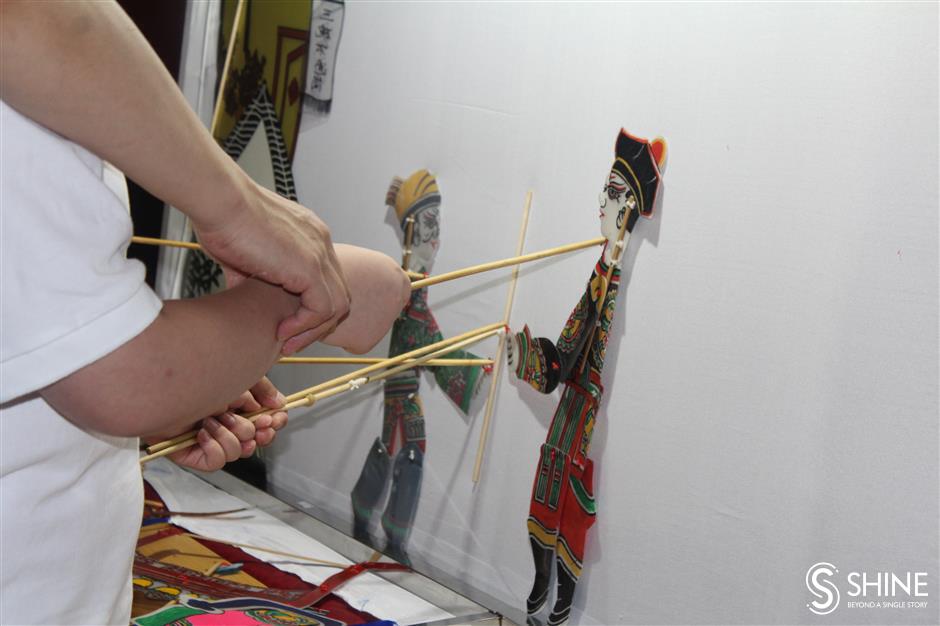 Shadow puppets in the hands of young performers

Ahead of her big stage moment, Little Yaoyao shuffled in her new pink-sequined sandals.

“What a pair of beautiful shoes! But you should have let her wear her everyday shoes since the new ones seem to hurt her,” someone said kindly to Bian, father of Little Yaoyao, an 12-year-old with down syndrome.

She was preparing to play the guzheng, or Chinese zither, at an art festival for mentally challenged children sponsored by Xinqing Community Service Center at Nanjing Road E. Settlement House on August 30.

“We named the catchphrase of the art festival ‘You Did Well, I Did Better’ instead of ‘You Did Well, I Did Well’ to encourage these children and help them build self-confidence,” said Cao Lijuan, founder of Xinqing Community Service Center, a self-funded social welfare institution.

Cao, a civil administration official at the Nanjing Road E. Community before she retired in 2012, has devoted herself to public service since her retirement.

“I am a granny myself. I learned through my experience sending my grandson to an early-childhood development institution that mentally challenged children are a special group that are excluded from various training institutions, though they may want to receive art education. The tuition fees at those art institutions are expensive and teachers there are often reluctant to teach disabled children,” said Cao.

Yet the number of such children in society is considerable.

The Nanjing Road E. Community alone has more than 40 children aged 16 or under who have obtained disabled persons’ certificates, not counting disabled children who hide their identities, according to Cao. 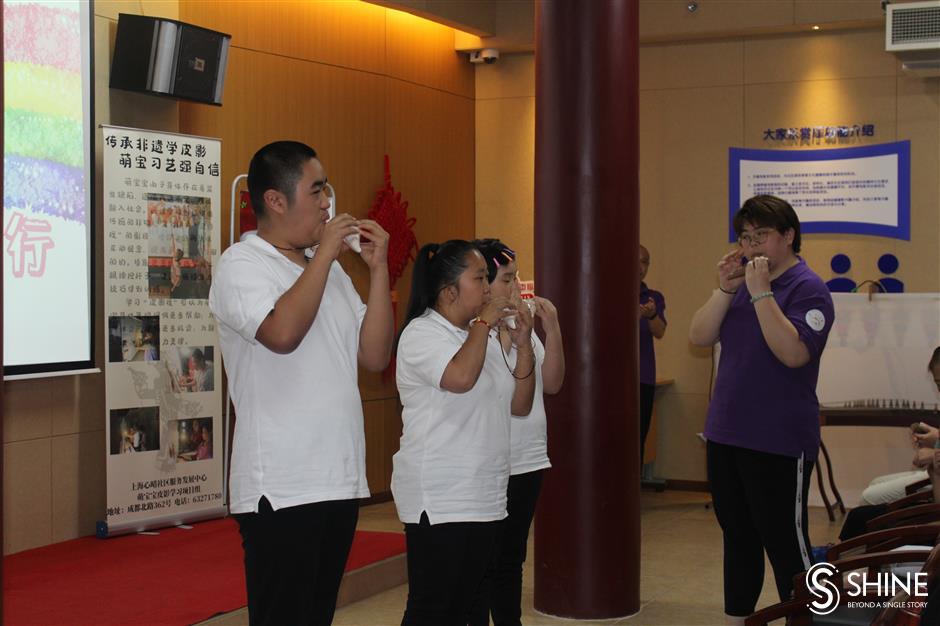 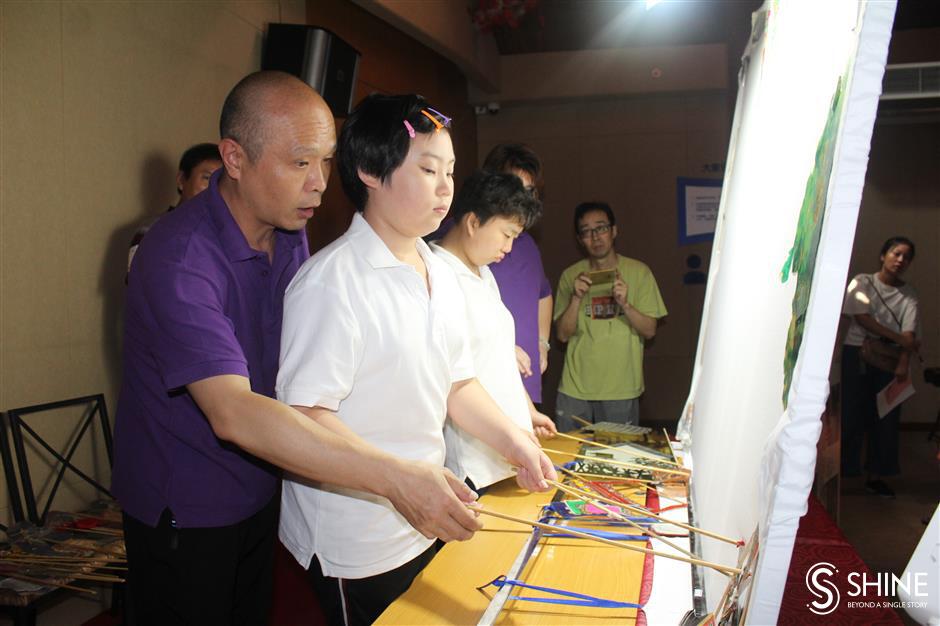 Starting from 2018, Xinqing Community Service Center began offering free art education courses in ocarina, guitar and guzheng, as well as shadow puppetry, to disabled children. The courses are taught by social workers from the institution who themselves have received professional art training and certification.

During the art festival held last Friday, students and teachers showed off their talents in ocarina, Yueju Opera, guzheng and guitar performances.

The festival was concluded by a grand finale of shadow puppetry presented by students and teachers.

“I had doubts at first whether our children could master the skills,” said Lu Weidong, a social worker at the center and a student of shadow-puppet masters in Qibao Town, Minhang District.

“A professional can handle two to three characters with his/her hands simultaneously. But for these children, we ask them to handle one character at one time. They are quite fond of performing shadow puppetry and it took them only one or two months to master the skills,” said Lu.

Big Yaoyao, a child with severe autism, didn’t speak a single word when she first visited the Joyful Community Service Center. Now, after studying shadow puppetry and the ocarina, she can follow her teachers’ instructions when they call her.

“The platform offers my daughter an opportunity to make friends and build self-confidence,” said her mother surnamed Zhang.

“An illness in his childhood affected the intelligence of my son. But as parents, we never give up. We find every possible means to educate him. And Mingming himself is a very aspiring boy. He has always been fond of music. But ordinary social institutions wouldn’t accept us. Then we found the Xinqing Community Service Center. Social workers here are very patient and help the children a lot,” said Mingming's mother surnamed Yu.

When Ruixuan, the youngest among Friday’s performers, staged his folk guitar playing and singing, the audience was immersed in his melodious voice.

“My son has some trouble with his nerves, but everything else about him is okay. Disabled children are often quite introverted and talk little. An activity like this will encourage them. I hope in society people can treat them with an unbiased mind. Especially when they are in school, I hope they can be accepted by their classmates,” said Du, mother of Ruixuan.

“Activities like this are popular among families with mentally challenged children. But so far we mainly depend on ourselves ... to pay tuition fees for the professionals, and the activity and travel costs. We sincerely hope other social or government efforts can join us,” said Cao. 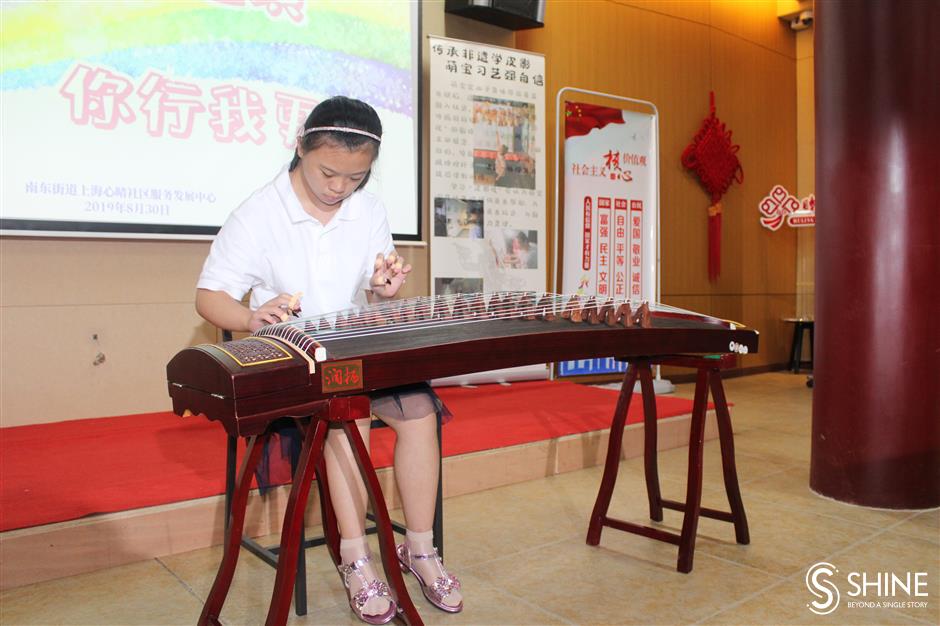 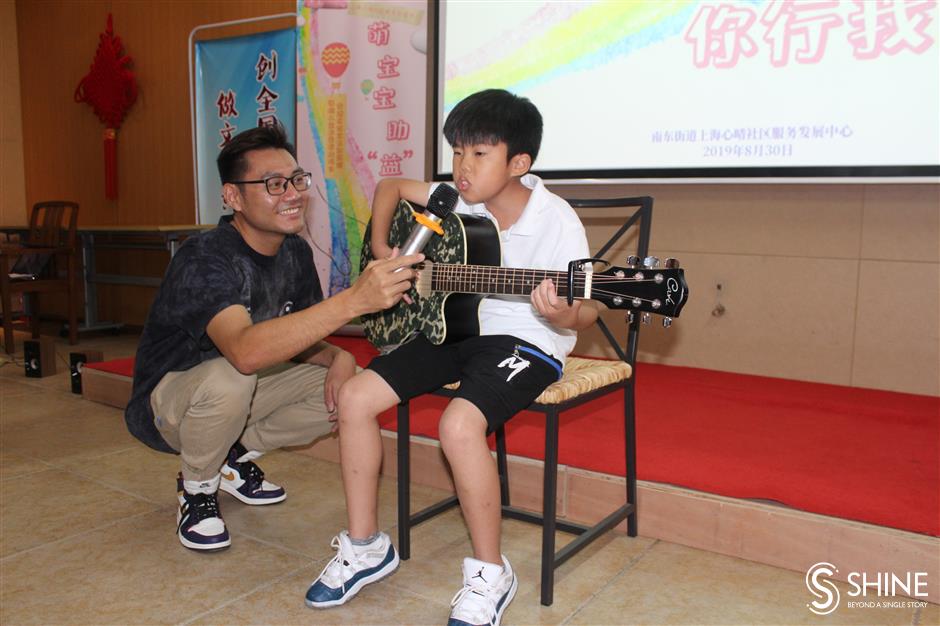 Ruixuan sings into a microphone held by his father while playing folk guitar. 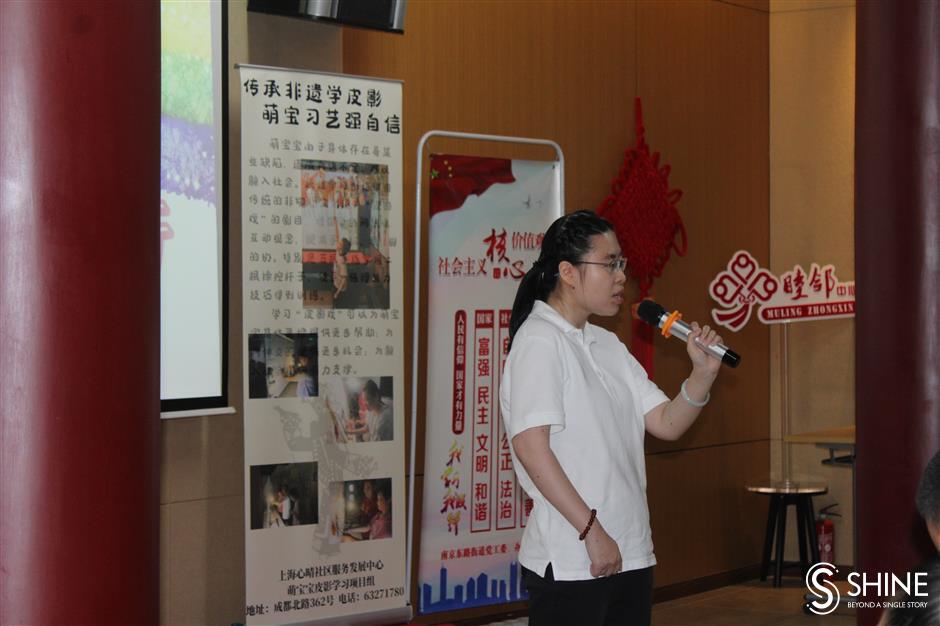