Two generations on, how we've changed!

October 1 marks the 70th anniversary of the founding of the People’s Republic of China. The milestone gives people a pause to reflect on how rapid changes in the past seven decades have impacted their lives.

He said he always analyzes aircraft accidents when they happen to think about how he would have handled the situations as a pilot. Accidents rarely happen, but when they do, the consequences can be dire.

“Some 100 passengers are trusting you with their safety,” he said. “Their lives are in your hands. We must live up to that trust.”

“It was about dawn and we were about to take off when I noticed a problem with the engine,” he said. “The whole set of routine maintenance checks had been performed and no one noticed anything wrong, but I could hear a noise in the running engine.”

Another round of tests was run, and it turned out there was a problem in the hydraulic system.

Chen started out as a worker in factory in 1968. He thought it would be challenging to join the army, but he had to balance that ambition against family obligations.

“Only my father lives in Shanghai,” he said. “My mother and siblings stayed in Taizhou (a city in Jiangsu Province). As the eldest son, the burden of helping support the family naturally fell on my shoulders.” 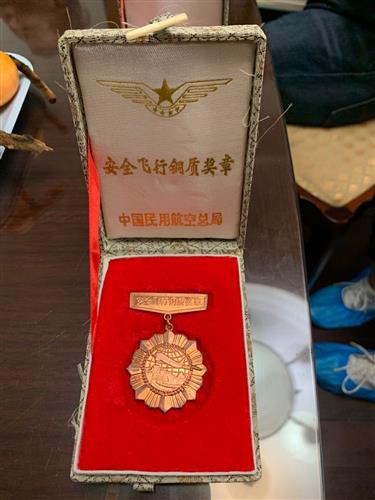 The gold award given to recognize Chen’s safety missions

Nevertheless, he joined the army in Nanjing. After serving one year, fate presented him with the opportunity to apply for the air force.

“More than 3,000 people applied for a few positions,” said Chen. “The selection was quite rigorous, and I didn’t really have much hope of success.”

But as Chen passed through the series of tests, he found fewer other applicants alongside him. In the end,

he was accepted for the air force.

Chen said he believes in fate, and his luck held during what were sometimes dangerous missions.

Chen clearly remembers 3:42am, July 28, 1976, when the Tangshan earthquake struck the region. Five minutes after his team received rescue mission notice, it set off with supplies. To make more room for more supplies, seats in the planes were removed.

Chen was the first to arrive at Tangshan. The planes had to land without the benefit of radar or a navigation station. Meanwhile, aftershock kept destroying structures on the ground.

“We couldn’t predict the time of the next tremor, which increased the risk of landings. If a tire got stuck in cracks in the runaway, the plane would be useless,” he said. 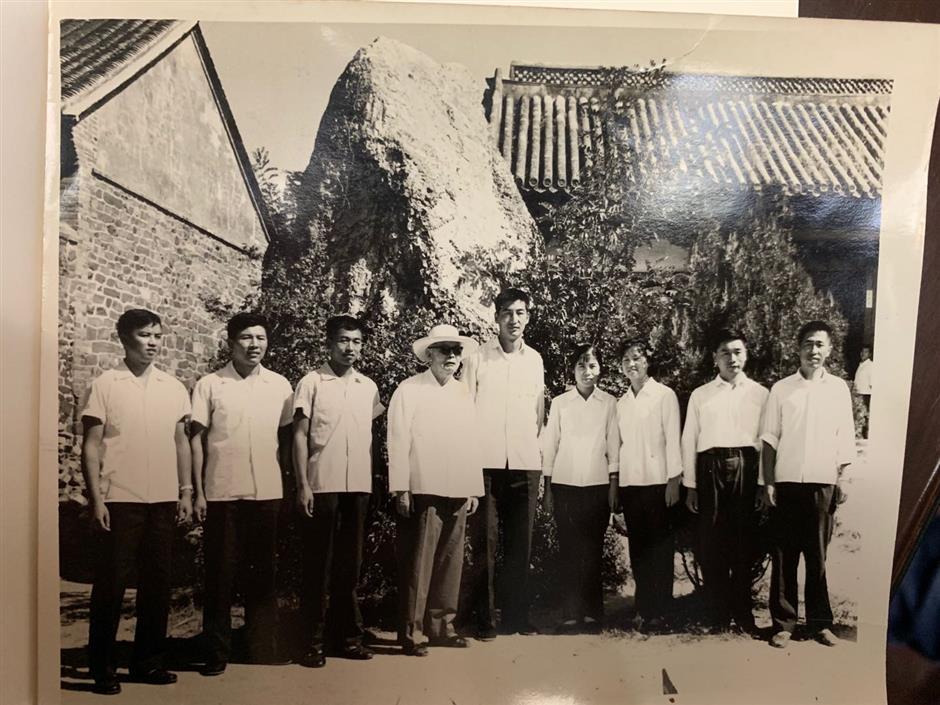 The rescue mission lasted for a week. Chen helped fly the wounded to hospitals in Taiyuan, Shanxi Province and Zhengzhou, Henan Province, working 16 hours a day with only bread for food.

“Disasters can’t stop the nation’s faith to save lives,” he said. “When the country needs you, you serve,” he said. “My job means responsibility to the nation.” Chen said he credits his wife for his success.

His wife, Zhuang Weiping, often didn’t know where her husband was but she knew not to fret. Once he became a civil aviation pilot, he began to have more time to spend with his family. His son looks set to follow his footsteps in the aviation industry.

I come from a family that has practiced traditional Chinese medicine from generation to generation,” Zhang Liren said. “I’m the only one who became a teacher.”

Zhang, his wife and their granddaughters enjoy a happy moment together in a local park.

Zhang didn’t intend to be a rebel in the family, but his one-time dream of becoming a doctor was dashed by the “cultural revolution” (1966- 76), which broke out when he was in the 11th grade. He was forced to drop out of high school and was sent to a rural area to farm.

“Life was tough and got even more difficult during three years of natural disasters,” he said. “We saved the best crops to sell and were left to eat the worst parts, such as cabbage roots and red potato leaves.”

Zhang was one of the few in the farming village who had some education. When classes began resuming several years later, the village hired him as a teacher.

“There were six teachers teaching all subjects to five classes,” he said. “Students had to bring their own chairs because we didn’t have any.”

Zhang taught Chinese, English and art. To increase his 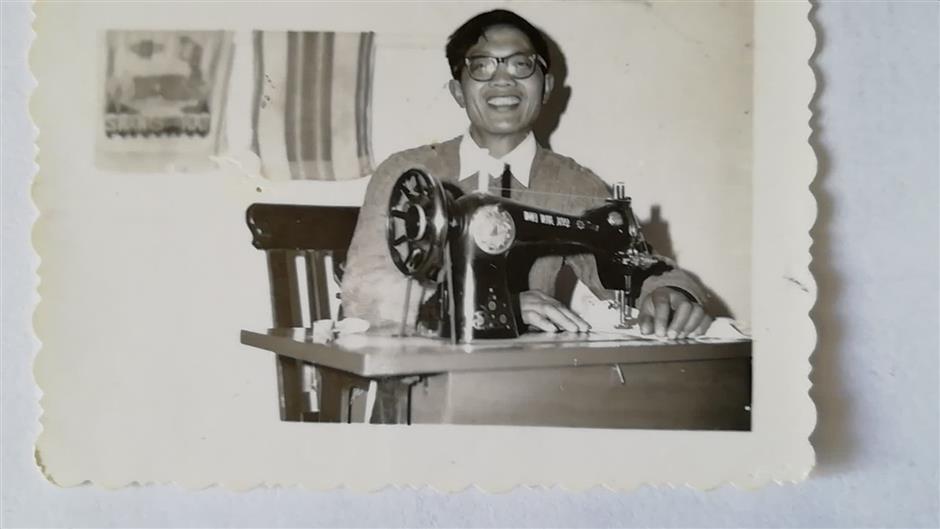 Poverty forced Zhang Liren to teach himself skills like building houses and making clothes and furniture. He even made his own wedding suit.

“Even the formal suit I wore for my wedding was made by myself,” he said.

China’s policies of economic reform and opening up to the outside world, which began in the late 1970s, lifted Zhang’s economic status. He was able to buy a radio, bicycle, sewing machine, watch and black-and-white TV.

Zhang (second from left) and his neighbors form a musical ensemble for a festival in Meilong where they live.

In the early 2000s, Zhang represented his village in asking the government for reconstruction funds.

“Now I live a cozy life,” he said “My retirement pension is more than adequate.”

He maintains a busy lifestyle in retirement, holding classes for book club members every week and taking flute lessons. Zhang said he actually feels like he’s getting younger.

Shen Xiaoyu, whose motto is loyalty to country and

His parents were poor but still held grand hopes for him and his siblings. Shen maintained studying even after having to drop out of school to do farm work. What he really wanted to do was become a doctor.

In those days, access to medical training was sparse. Shen trained for only three months before he was assigned to follow doctors on their rounds. Day by day, he gathered experience. 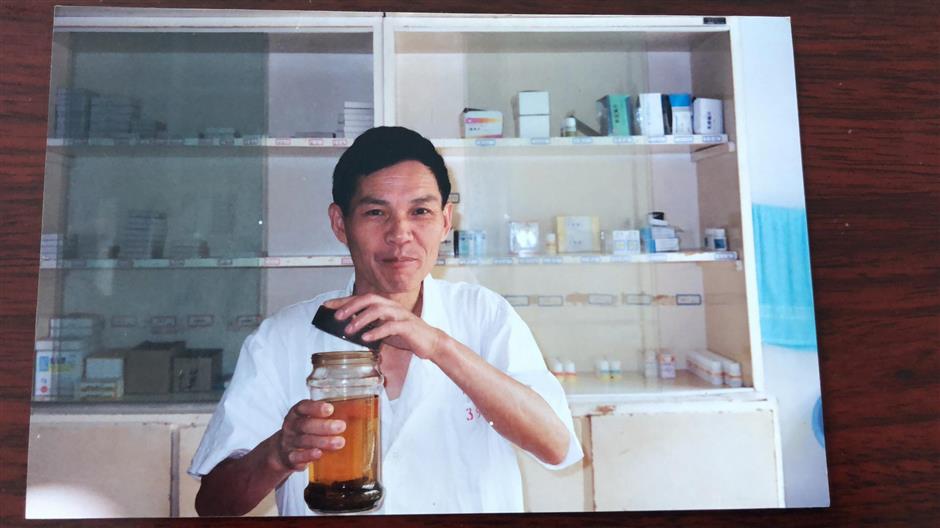 Shen at his office in the Zhuanqiao Health Center

In 1969, the news that he was accepted by the army changed his life. Shen became a medic and was selected as a model soldier for three years in a row.

Medical equipment was a rarity.

“When my wife was pregnant, the doctor at the Beiqiao Health Center couldn’t verify that she was carrying twins because he didn’t have the appropriate equipment,” said Shen. “There were only a basic stethoscope, a blood pressure cuff and a thermometer.”

When Shen was discharged from the army, he went to work in a local hospital in 1986.

Healthcare conditions began to change dramatically. A two-story health center was built and it managed to get an X-ray machine.

Major reforms in the nation’s medical system began in 1998 and were completed in 2016.

“When I returned to Minhang in the 1980s, staff from units above county level and veterans enjoyed full reimbursement for medical expenses, which also covered half of their children’s medical bills,” he said.

Shen said good medical care is one of the greatest benefits the government has bestowed on people. By the end 2018, 1.3 billion residents were covered by medical insurance.

Special Reports
ADVERTISEMENT
61766
,
Guide for overseas Chinese students during COVID-19 pandemic
A cemetery that celebrates life and death
Nile threatened by waste, warming, dam
Enchanting abode in idyllic tranquility
Connecting nature, culture and people with design
Fancy footwork: An embroiderer finds her niche
How overseas Shanghainese go through outbreak
Counseling eases psychological toll of outbreak
'Support troops' guard the doors to the city
A guardian of the light ... and of hope for Wuhan
EXPLORE SHINE