In Shanghai, 72-year-old retiree Zhu Boming is a real-life “doctor in a toy hospital.” He performs all kinds of “operations” on his patients — fluffy toys which mean everything to their owners.

He not only repairs the toys, but restores their owners’ precious childhood memories.

Zhu has always been good with his hands. When he was a child in the 1950s and 1960s, widespread shortages lead to rationing.

So Zhu learned how to cut and sew, so he could make clothes for his family of five.

After graduating from a technical secondary school majoring in machinery, he worked in a metal-cutting factory. His products were soon exempt from inspection because of his craftsmanship and consistency.

Later he became an analog electronic engineer at another company.

Zhu began repairing toys when his son asked him to fix his worn-out bear Mingming.

However, his boy was not satisfied, as the bear did not smile as it did when it was new.

Zhu tried again, but his son was still unhappy.

Zhu then realized the bear had formed a fixed impression in his son's mind. So he asked him to remember every little detail and bit by bit adjusted the toy till his son was satisfied. 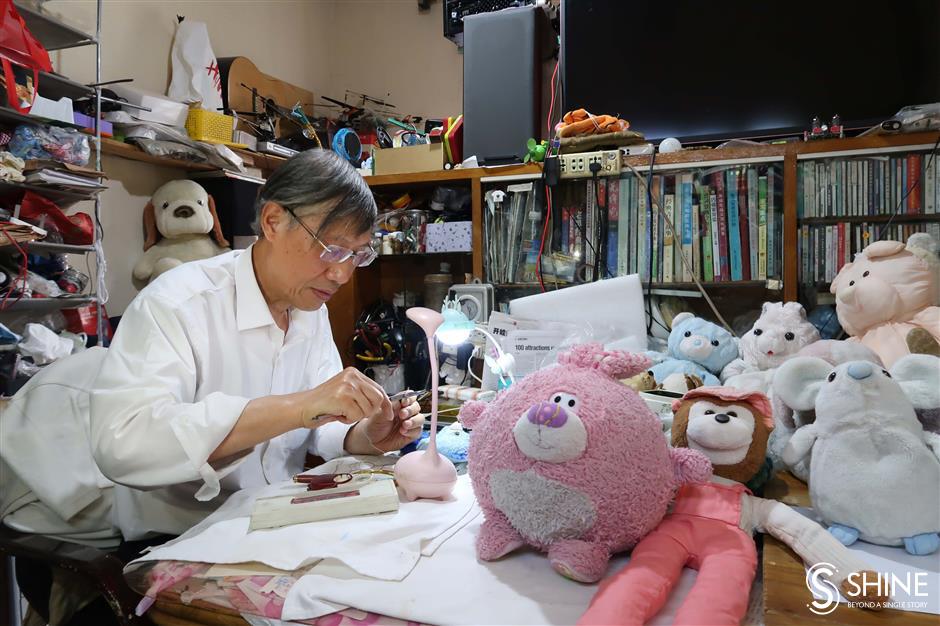 Retiree Zhu Boming, 72, repairs old toys at his home in Hongkou District. Zhu started his “toy hospital” three years ago and has since repaired hundreds of dolls. 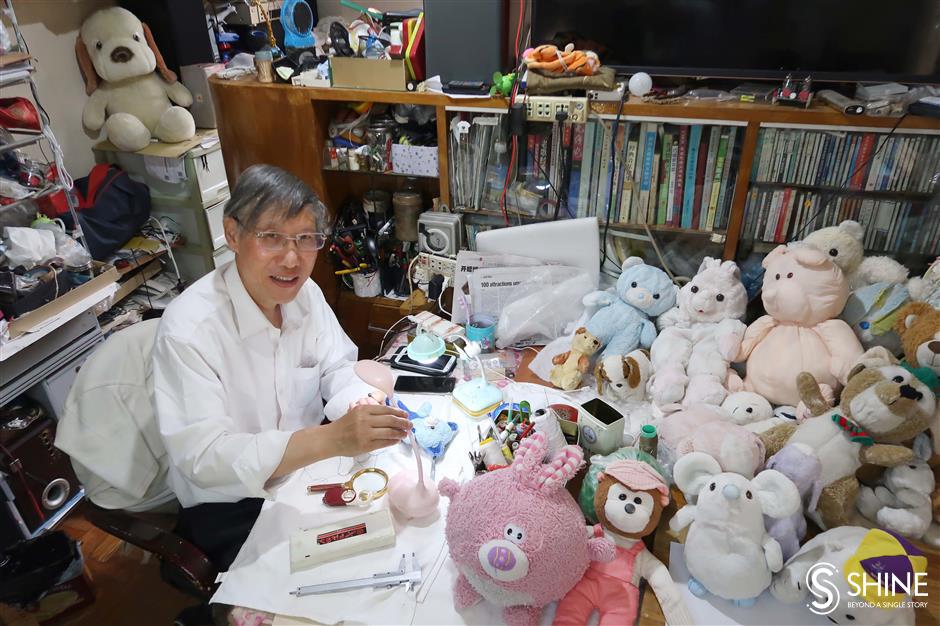 A crowded desk in the middle of his 15-square-meter living room is the "operating table."

From 2008 to 2011, after retirement, Zhu carried out after-sales service maintenance for US toy company Fisher Price.

Three years ago, a customer who learned about his special techniques from the Internet suggested he open a “toy hospital.”

There are such hospitals in Japan but she believed Zhu was more skilled. His weaving methods were superior and he would go to great lengths to find the same material for the old toys rather than use new fabrics.

Later, she promoted Zhu online, making him known to people needing their beloved toys brought back to life.

Zhu’s clinic is in his home in an old apartment building in Hongkou District. A desk in the middle of the 15-square-meter living room is the operating table where more than 10 toys are stacked waiting for treatment.

He is the only “doctor” who is confident he can fix broken limbs, missing eyes, noses and mouths, ragged skin, and lost hair.

When owners bring him their toys, Zhu draws detailed pictures.

“If I should fail to repair it, I can return it in the condition it was when its owner sent them here,” he says.

Next, he draws up a repair plan. With the approval of the client, he starts work.

Before and after repair and cleaning

Cleaning is important as many dolls sent to him are old and have accompanied their owners for many years. Owners dare not wash them for fear they will be ruined.

“Owners normally sleep with them, so sweat, saliva and cosmetics leave stains on them,” Zhu said.

However, cleaning is not easy. Zhu says the alkalinity in ordinary cleansing fluid would damage the fibers, making woollen toys harden or lose shape.

He managed to develop a new detergent with the help of a friend which works well in removing stains while not damaging the toy.

In order to restore a doll to its original appearance, Zhu usually goes to the library to research the fashion, designs, styles and materials from when the toys were new.

Zhou spends a lot of time shopping at fabric markets and wool stores to look for the exact material to match the original. Sometimes searching threads of one particular color can take him four or five days. 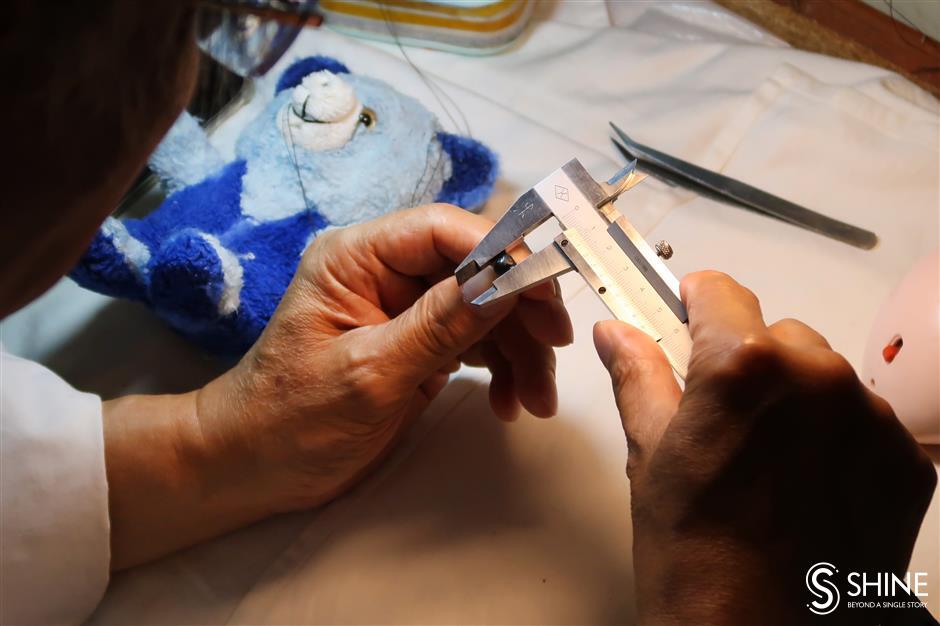 Zhu uses a Vernier caliper to measure a replacement nose for a toy bear.

But that’s not all.

From the experience repairing a toy for his son, Zhu knows how important it is to retain each toy’s unique appearance and personality.

“Each doll was given life by its owner,” he says. “Its gestures and manners have been established in the owner’s mind, you must try your best to follow the owner’s thinking to restore its appearance in his or her heart.”

Many owners ask him to restore their treasured possessions in line with the images rooted in their minds from childhood.

He shows owners pictures and videos for their agreement before every step, and even leaves them a few hours to consider the way ahead. He never tires of making adjustments until clients are satisfied.

“The most extreme case was when it once took me three days and nights to adjust the position of eyes,” he says.

“I was amazed that a 30-year-old could tell minute differences in the state of a nose of a doll from when he was only 4 or 5. They would say things like adjust the thickness by 0.5mm or move it up by 0.3mm.” 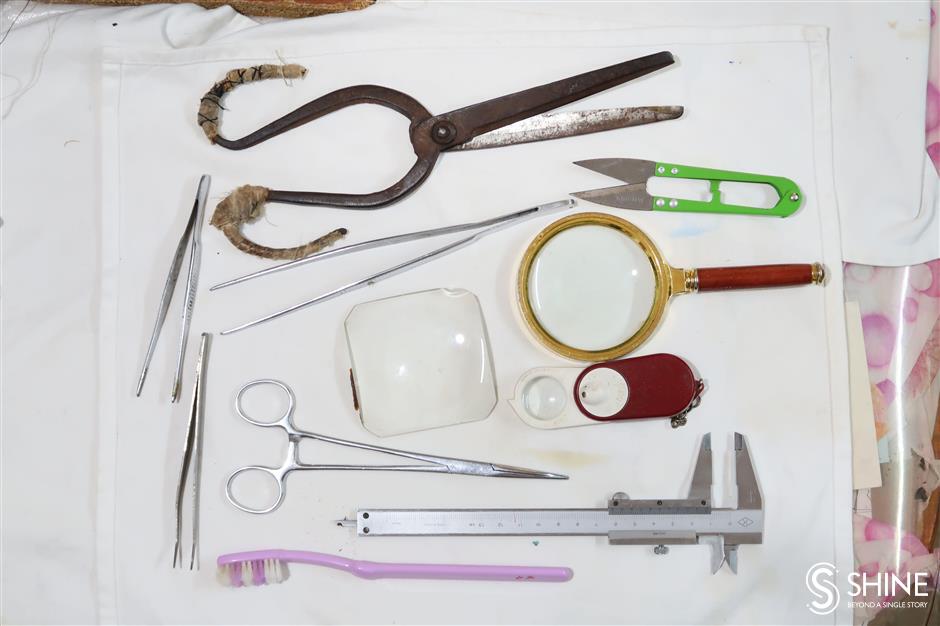 A bewildering variety of tools and instruments are used for repairs.

His clients range in age from 7 years old to their mid-40s, many of them university graduates. But they all treasure the toys they’ve had since childhood and hold them in deep affection. Each enjoys a high status in their owner’s home — sometimes other people are not even allowed to touch them.

“Once when a mother and daughter saw me use needle and thread to perform an operation on her daughter’s toy, the mother said ‘Master Zhu, only you can do it here. If I did this at home, I would be cursed and hit by my daughter’,” he says.

“Another girl from Chengdu told me her bear had experienced the 2008 Wenchuan earthquake in Sichuan Province with her.

“She told me ‘I have thought seriously that if earthquakes were to strike again and I could only take one thing from home, I would take my bear, I don’t want anything else’.”

“There mustn't be the slightest slip, otherwise they (the owners) would kill me!” he says. “What if I blow it? No ‘what if!’ It has to be successful!” 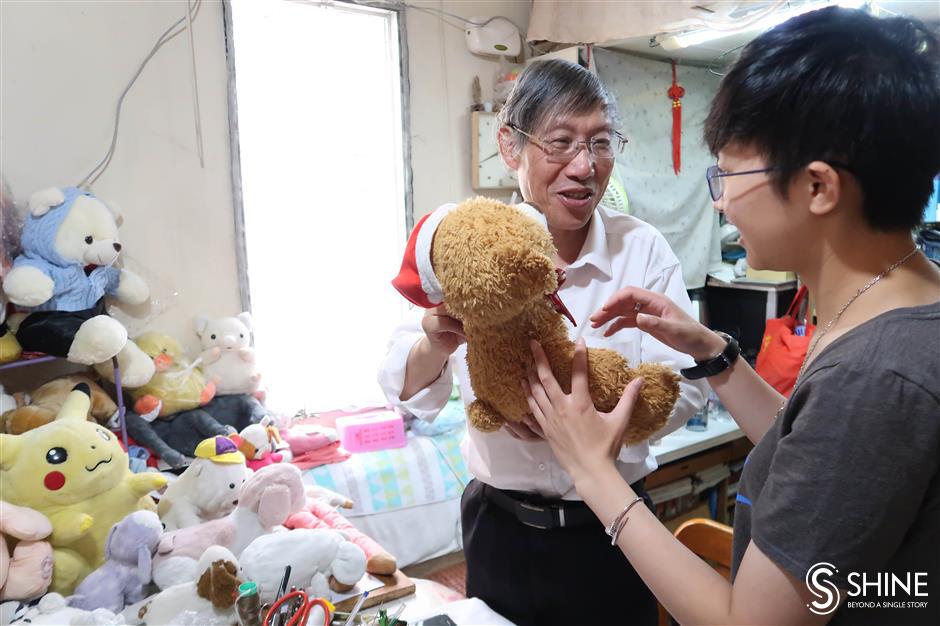 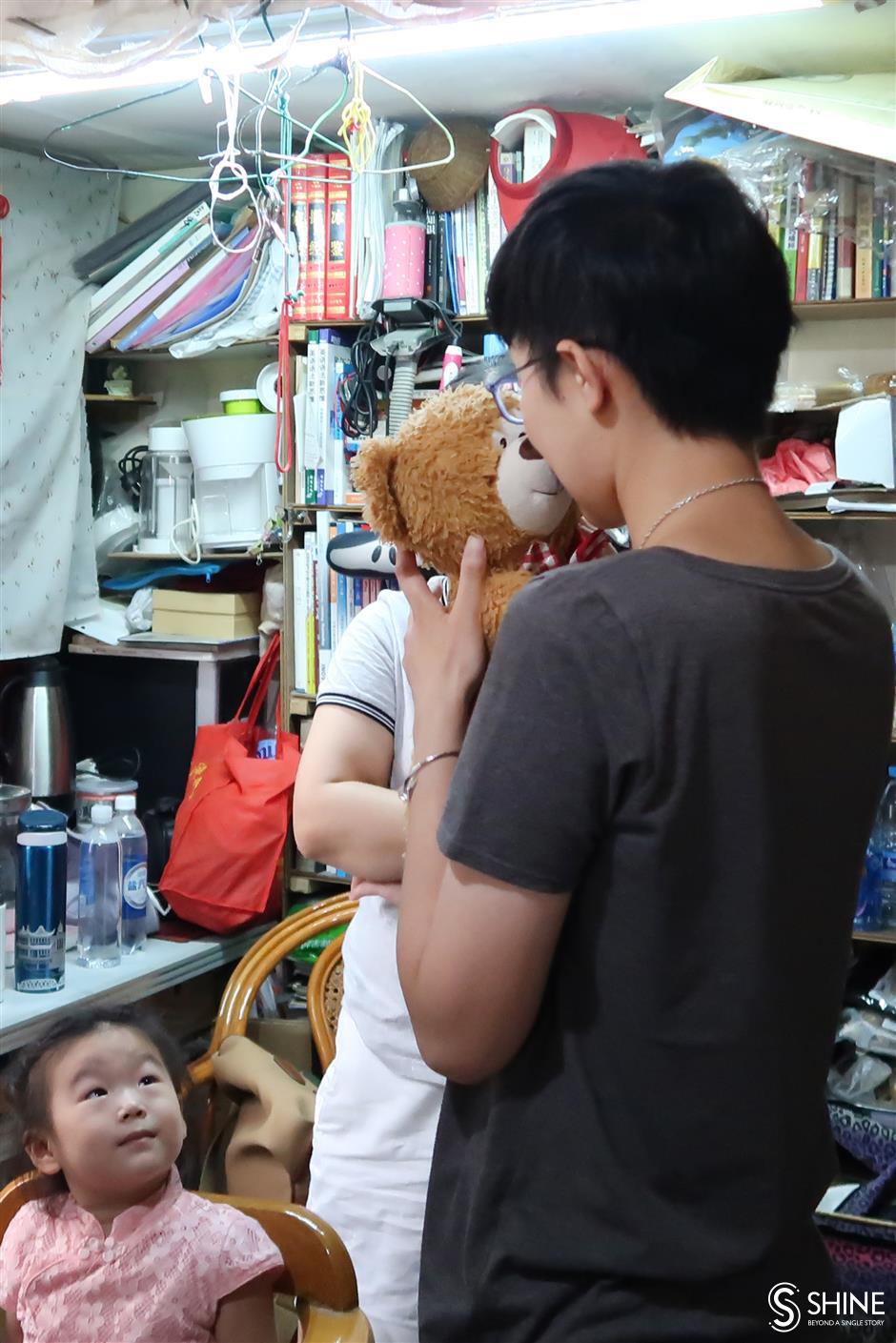 The client gives her bear a kiss before handing him over for repair.

However, he says almost 99 percent of clients are satisfied with his work, while the other 1 percent eventually recognize his efforts.

A man once sent his toy to him for cleaning. It hadn’t been cleaned for two years and there were two black stains on its mouth. Zhu successfully cleaned it.

But when the man arrived to fetch the toy, he didn’t say anything, and Zhu noticed he kept pressing on the mouth.

Three days later, the man published an article online, accusing Zhu of not being able to fix toys and damaging it. He claimed it had been smiling, but after the repair, the mouth looked like it was neither smiling nor crying.

“I broke down when I saw these words because I thought I had managed to clean the stain as per his request, why then did he scold me?” Zhu says.

“I couldn’t sleep for days and later I told him after the stain was cleaned that the cloth definitely kind of popped up … it was just a natural physical phenomenon.

“After two months, he came to me to apologize, saying my repair was the best. He pressed that position of the mouth for two months and the mouth returned to the way it was before cleaning.”

Zhu updates a client by video chat on his work. He asks for the owner's confirmation before taking the next step.

Keeping customers satisfied is no easy job, it takes a lot of time and effort, good craftsmanship, scrupulousness, ability to work under pressure and also, communication skills and patience.

Zhu tells another story about a woman who wanted eyes for a mouse which had lost them years before.

He went to Shanghai Library to research the design trends of the 1970s and adjusted the eyes until she said they were ok. But when she got the toy, she still felt uncomfortable about the “new” eyes. However, six months later she told Zhu the condition of the toy was perfect — the eyes had begun to sparkle.

Though Zhu sometimes is pained when misunderstood, he feels his work pays off every time owners are happy and express their gratitude.

He also feels that during the lengthy repair process, when he listens to owners’ stories, discusses with them their requirements, checks every detail of the repair, and answers their questions when the toys are returned, he is giving them psychological counselling and comfort.

“Many owners say my repaired toys restore their memories of childhood,” he says. “In this sense, I am not only a surgeon but also a psychiatrist.” 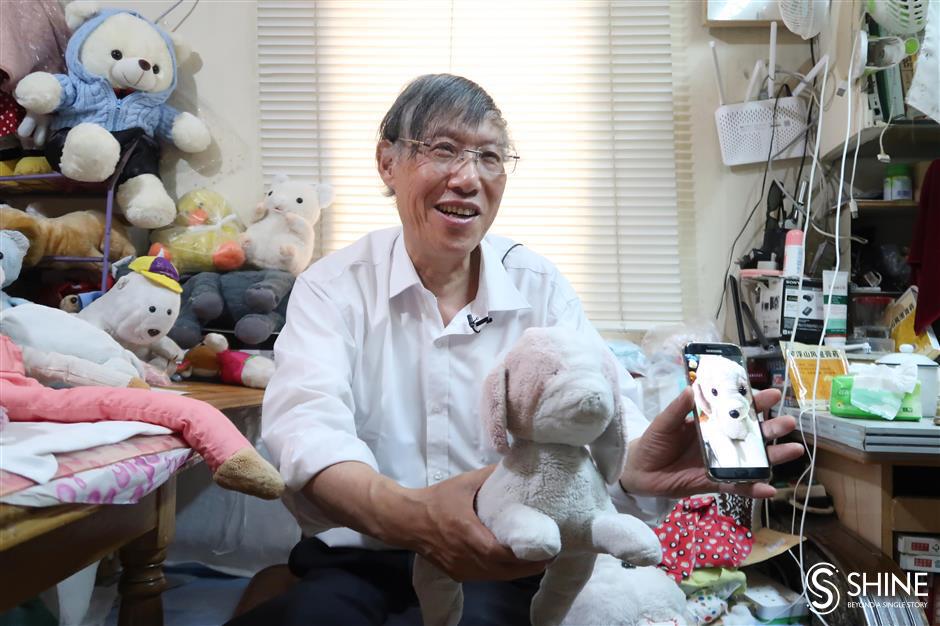 This toy dog has lost his button eyes, but the one on the phone has already been repaired.

Zhu said his saddest story was when a youth came with a toy dog and asked Zhu to remove a black stain. Zhu asked him how the stain had occurred. The youth said the toy had been left by his father to his elder brother. His father had died and later his brother also died in a car accident, when the dog was with him. The stain was his brother’s blood.

The youth had kept the dog with him even when was studying at a university in Macau. He had gone to some other places to get the stain removed but without success. He hoped Zhu could help him and also fix the worn parts.

Zhu said he was shocked when the youth asked for a thorough cleaning and to make the toy as if it was new.

“I confirmed with him again and again to make sure he did want to take out the stain because many clients don’t want to remove old traces even if they are stains,” he says. “Some would say keep the stains and smell of this part, but clean other parts of the toy.”

The youth told him later that with the restored dog, he felt like his brother was by his side.

Zhu said previously he could fix one or two toys a month. Now with more and more customers coming to him, he finds there is not enough time and energy to finish all the work though he works from 8am to midnight. He tells new clients they have to wait for at least three months. But if his health allows, he says he will continue.