Shanghai brightens up its nights 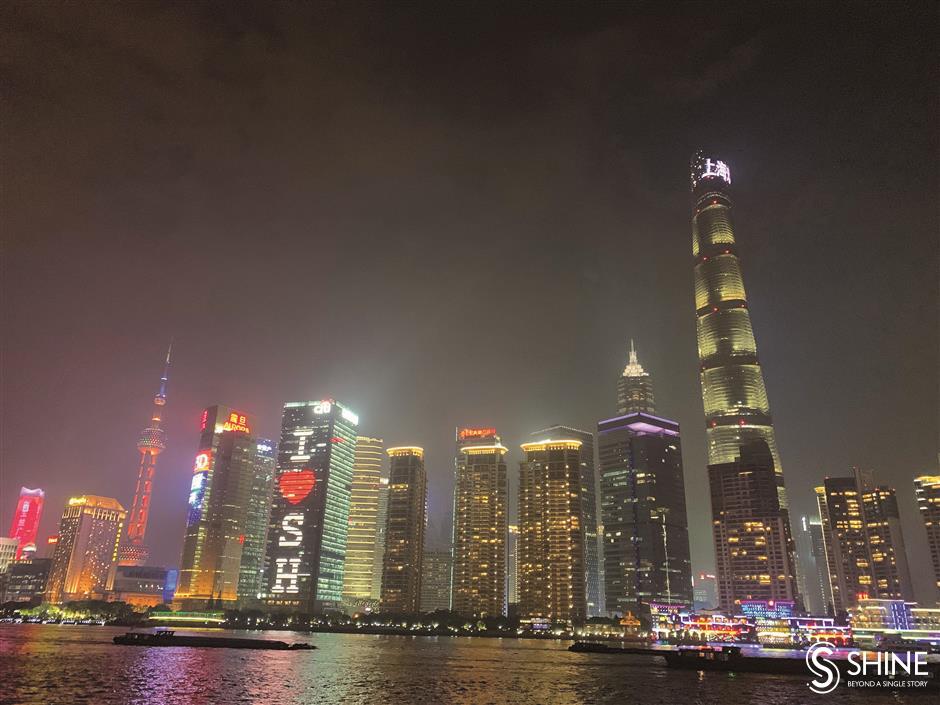 Taking a cruise on Huangpu River to appreciate the night views of the Bund and the Pudong skyline is popular among tourists.

Shanghai is known as a brilliant city at night, and its nightlife is to become even more sparkling as city authorities promote the development of the night economy.

The city’s culture and tourism authorities have released a list of more than 100 cultural venues and tourist attractions that open at night.

“The night economy is an important part of the urban economy, and its prosperity is an important sign of the openness and vitality of a city’s economy,” said Chen Ping, chief of Shanghai Administration of Culture and Tourism’s market promotion department.

A beautiful landscape is the essence of a night economy, and fashion life is its theme, according to Chen.

“Haipai culture (the unique Shanghai-style culture of East-meets-West) is its quality and soul,” Chen added.

The venues include both traditional tourist attractions and emerging business, tourist and cultural complexes.

The magical visual journey is staged at the tower’s zero-meter hall. Each show lasts 12 minutes. It is free though reservations are required via the tower’s WeChat account. 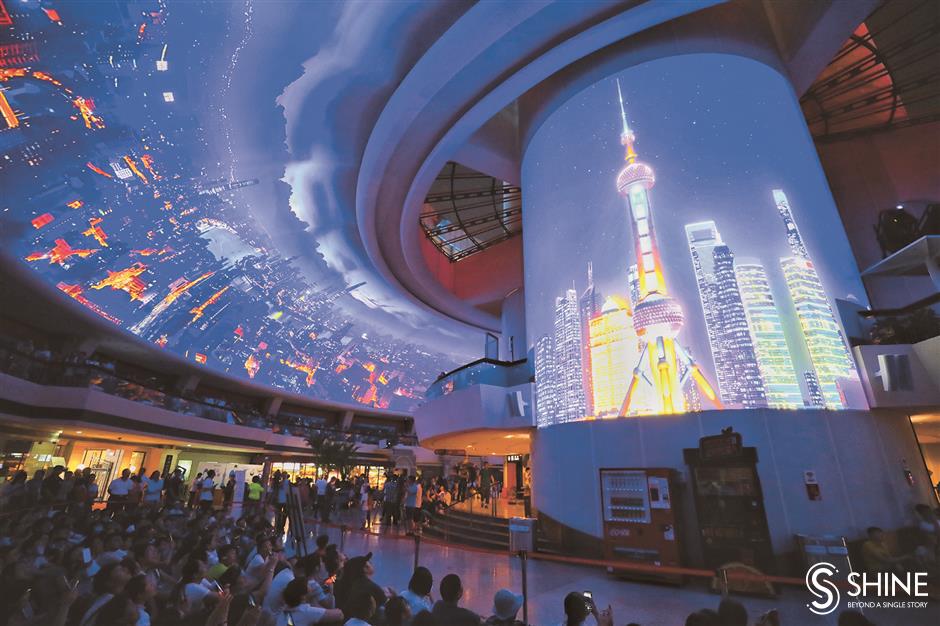 Shanghai Wild Animal Park has extended its opening hours to 9pm, inviting visitors to explore the animal world after sunset.

“The night zoo will display another side of the lives of various wild creatures,” said Zhong Yi, the park’s deputy general manager.

“Animals like tigers, lions, raccoons, Central American tapirs and anteater sare active at night, and they seek food or do exploring and washing,” he said.

The 88th-floor sightseeing observatory of the Jin Mao Tower opens to 10pm with three skyway walks organized every night.

The sightseeing tunnel on the Bund is open to 11pm on Fridays and weekends until November 30.

Jinjiang Amusement Park in Minhang District has staged a themed light show. It closes at 10pm.

Museums and art galleries are hosting exhibitions and lectures to present the cultural allure of the city’s night life.

Shanghai Museum of Glass is staging lectures and psychodramas at night, while the Shanghai Film Museum and Shanghai Meteorological Museum will host museum magic night tours in September.

Moreover, the Museum of Contemporary Art Shanghai, World Expo Museum and Shanghai History Museum are also open to the public at night.

In April, city authorities released a guideline to promote the development of the night economy. 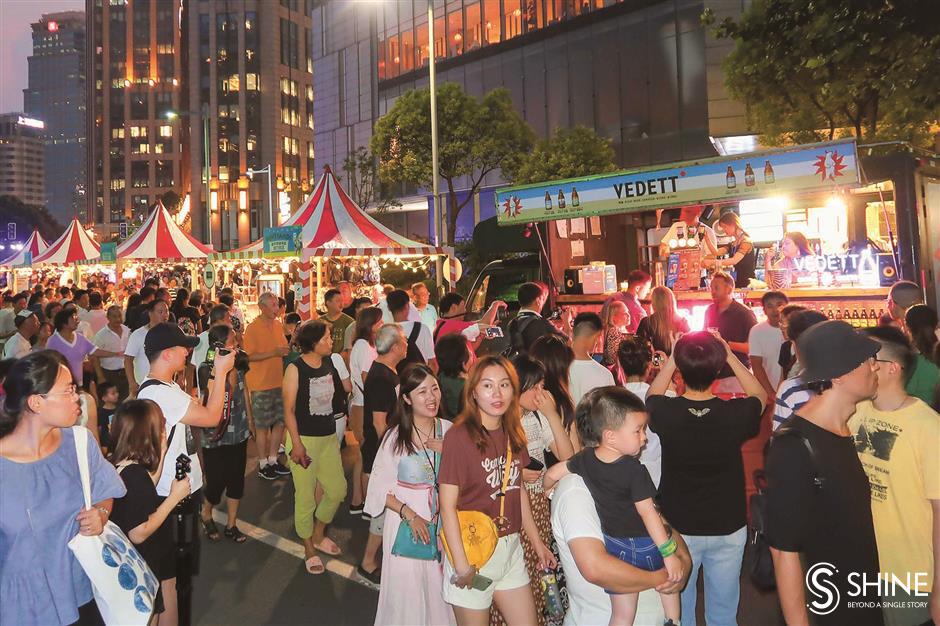 The night market in Xintiandi has attracted a large crowd. The 500-meter-long section will be pedestrian-only during weekends.

In Yangpu District, a “nightlife director” has been appointed and the district government will release a batch of measures to boost nightlife, such as supporting small street businesses, encouraging cultural performances at shopping malls, revitalizing time-honored brands and boosting the opening of small boutique stores.

A new nightlife street has been unveiled at the Pacific Fresh City in Yangpu, the city’s largest underground market connected with the Wujiaochang and Jiangwan Stadium stations of Metro Line 10.

A night art festival and tour has been launched around Fuxing Road in Huangpu where there are many historical villas and former residences of celebrities.

The first batch of events includes a starlight jog, an outdoor concert and an innovation market.

A 500-meter-long road in Xintiandi has been closed to traffic at certain times from mid-August to allow entertainment that includes performances and outdoor movies.

Hubin Road near Taiping Lake becomes pedestrian-only from 8pm on Fridays to 5am on Mondays.

In two weeks, the turnover of businesses on the pedestrian-only road reached 60,000 yuan (US$8,398) and the number of visitors to two nearby shopping malls soared 52 percent on weekends with a 17 percent increase in turnover.

The number of weekend visitors reached more than 30,000 on a single day.

Hongkou District plans to open nightlife markets around its Musical Valley as well as several branch streets such as Harbin and Tengke roads.

The city’s urban management and law enforcement authorities said they will guide businesses to keep a clean environment and handle kitchen waste and waste oil properly to ensure healthy development of the night economy.

Inspections into irregularities and disturbances resulting from night markets will be stepped up to ensure a good night market experience for residents, the Shanghai Urban Management and Law Enforcement Bureau said. 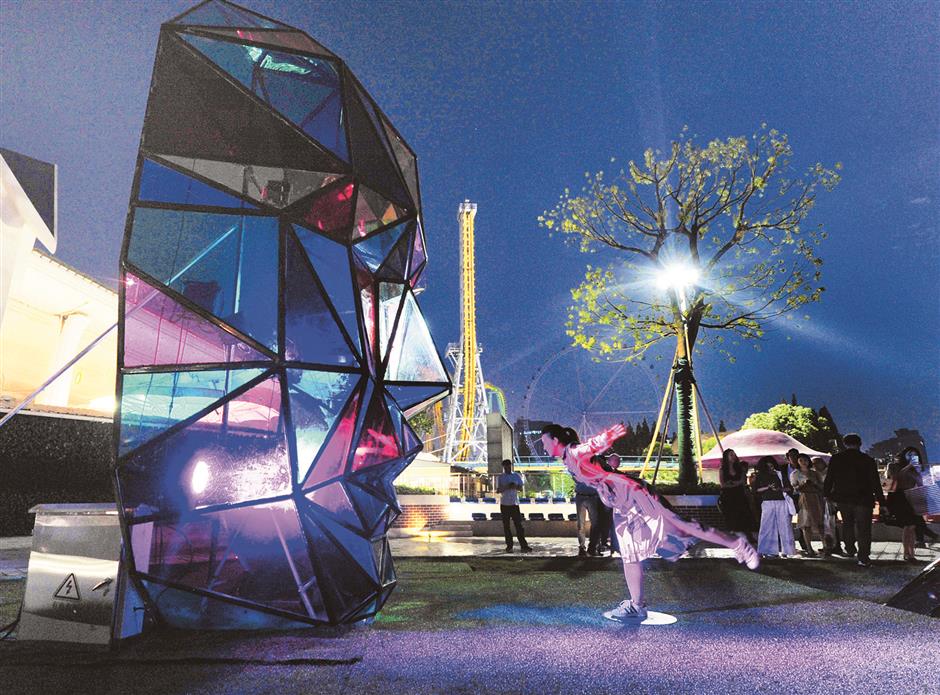 A visitor poses in front of a light installation at Jinjiang Amusement Park.