Gu-style embroidery stitches up in Milan 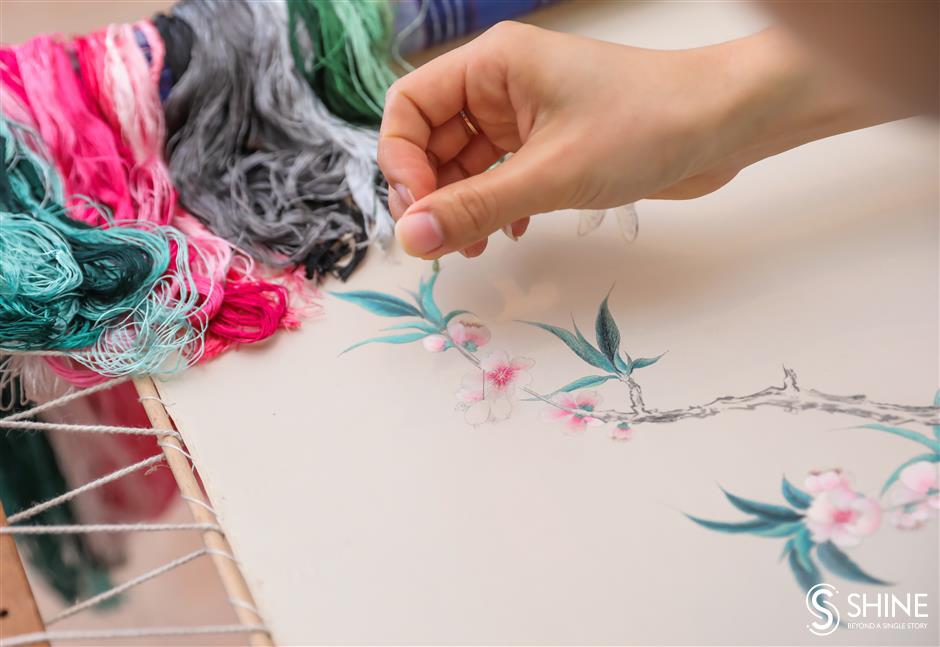 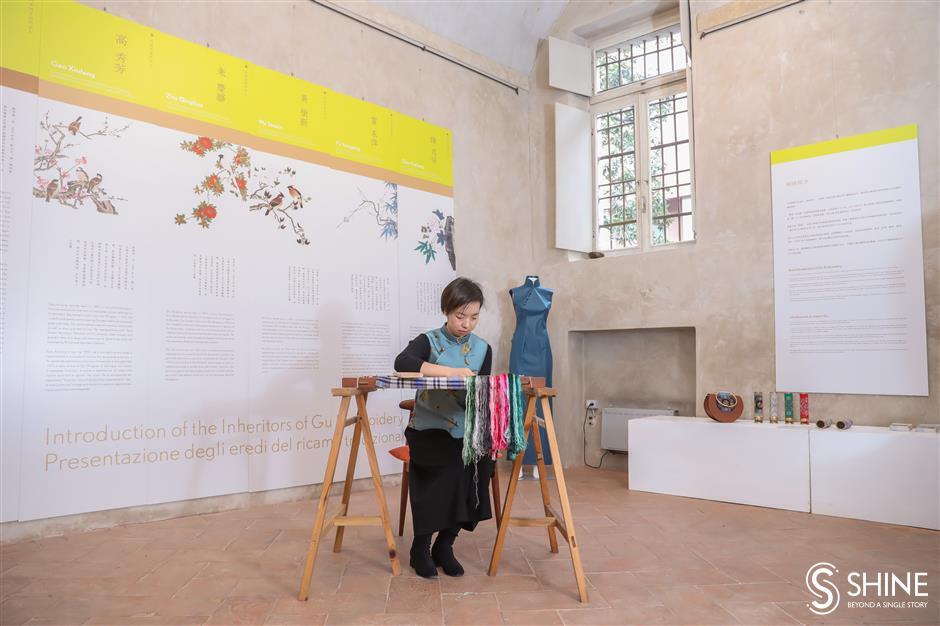 Zhang Li, a Gu embroidery artist, demonstrates her skills during an exhibition held at Milan Art & Events Center between December 9 and 15.

From December 9 to 15, the “Let’s Meet Shanghai: Gu-style Embroidery Exhibition” took place at the Milan Art & Events Center in Italy. The exhibit also celebrated the 40th anniversary sister-city relationship between Milan and Shanghai.

iDEALShanghai went to the metropolitan Italian city with the special exhibition and shared stories of Shanghai’s intangible cultural heritage with citizens in Milan.

Guxiu, or Gu-style embroidery, a Shanghainese needlework style created by women in the Gu family in 1559, originated in the city’s Songjiang District. It has been passed down and developed for more than four centuries, surviving turbulent times up to the modern day with its own unique artistic style.

The style is also called huaxiu, or painting embroidery, because it incorporates Songjiang-style painting. 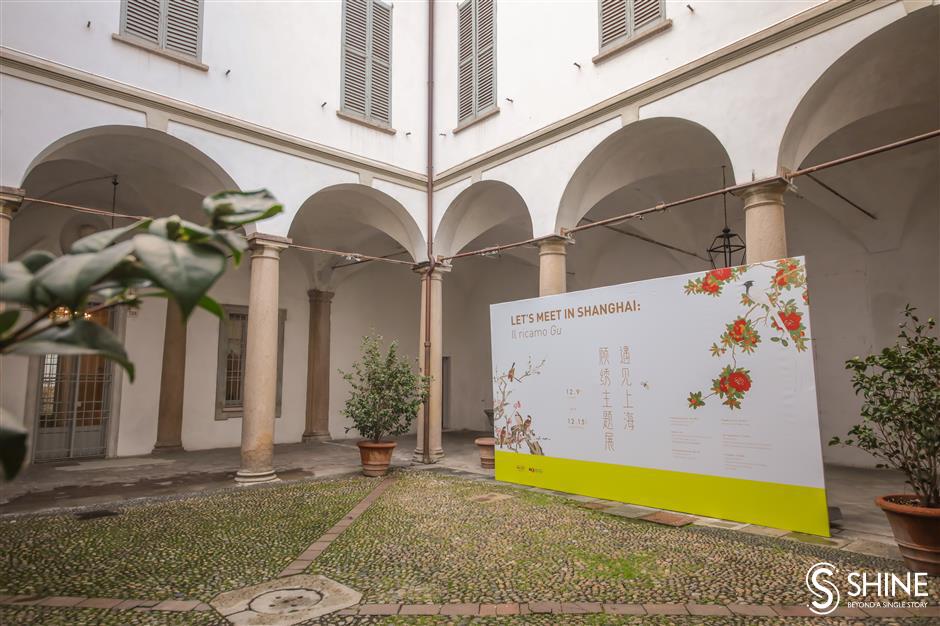 A display board outside the exhibition hall details theme, organizers and time of the Gu embroidery showcase event. 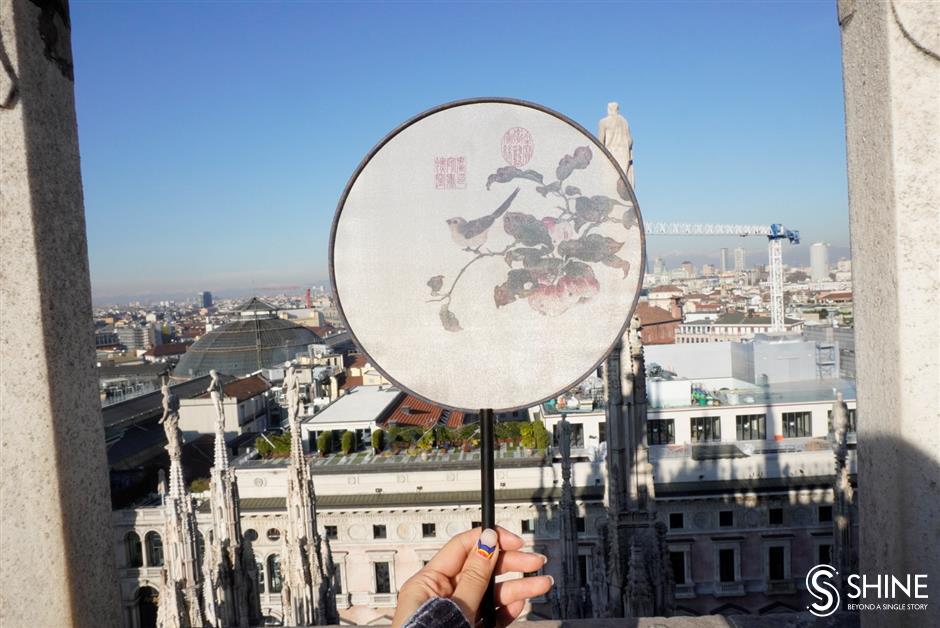 Fiona Li holds a moon-shaped fan in front of the Milan city landscape.

For guxiu artisans, needles are pens and the strings are lines, helping crafts people to “paint” a picture in their mind. Their works are hard to distinguish from traditional Chinese ink-wash paintings.

Songjiang District has revived guxiu over the past century and cultivated more than 20 guxiu craft inheritors. Their embroidery works are now popular across Europe, North America and Asia.

The patterns on the eight exhibits taken to Milan, include flowers, grass and insects, human figures, fish and weeds, calligraphy, fans and fishing scenes. There was also an interactive activity at the show, where you could take a selfie with one of the exhibits, post the photo onto a social media platform with #MeetGuXiu to win a souvenir from Shanghai. 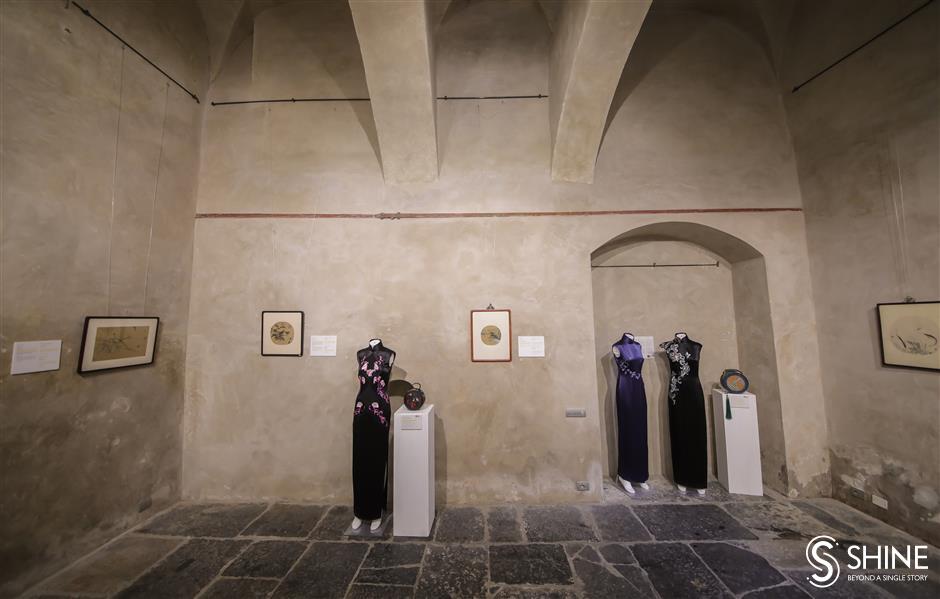 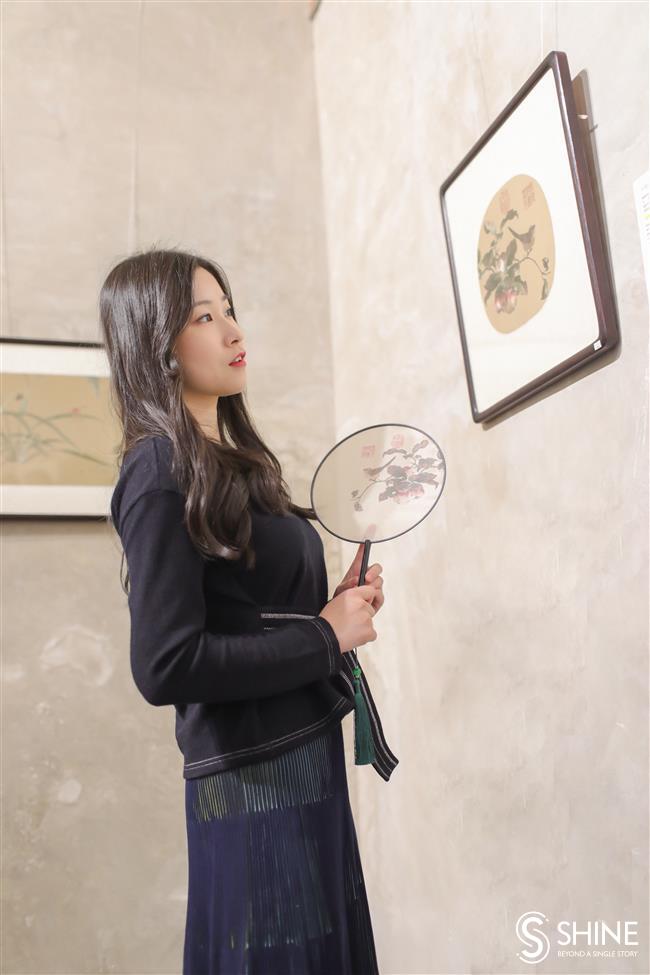 Zhang Li, 36, a xiuniang — one who designs and makes embroideries — went to Milan to demonstrate her skills at the exhibition.

Zhang’s work is an embroidery version of the “Painting of Peony,” a painting from the Southern Song Dynasty (1127-1279), which is now stored in Beijing’s Palace Museum. One difficulty in its embroidery is the overlapped petals, which require various stitching methods.

After the work was finished, the peony looked even more vivid and glossy than that in the original painting.

Zhang said she has been creating guxiu work for 17 years.

“I used to be a vocational school student in Songjiang and saw that the guxiu workshop of the Songjiang Electronic Instrument Factory was looking for some craft inheritors at my school,” she said. “I attended the orientation and was deeply attracted by guxiu at the first sight. Then I signed up for some training courses and made a career of it.

“I feel very honored to show my work in Milan, a world-renowned metropolis and ‘fashion capital.’ I hope this exhibition can leave a deep impression on people in Milan and let foreign friends enjoy the charm of traditional Chinese culture.”

Zhang also took her work bench to Milan, where she showcased her unique embroidery skills when crafting some peach blossom needle work.

The artist revealed how very thin string could be divided into 32 strands. From there she weaved her magic embroidery skills into an extremely delicate and vivid pattern. The thinnest strand is used on embroidering things like the lines on a dragonfly’s wing.

“There are about 16 stitching skills and over 1,500 colors in guxiu. A good embroider must select the right one, each of the small flowers needs more than one week’s work,” she told iDEALShanghai. 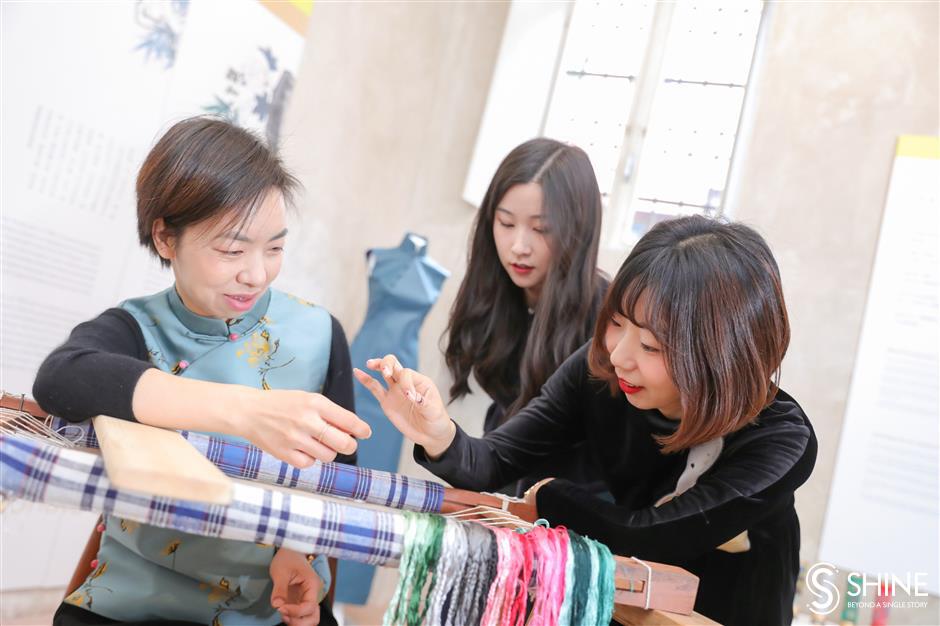 The earliest representatives of guxiu were Lady Miao and Han Ximeng, both from the Gu Mingshi family, who had won a jinshi (a top imperial examination degree) in the 38th year of Emperor Jiajing in the Ming Dynasty (1368-1644).

With exquisite skills of both embroidery and traditional Chinese painting, Han Ximeng further developed normal embroidery to painting-embroidery, and promoted it as an art after over 20 years’ practice.

Most of Han’s work was inspired by famous paintings created between the 10th and 14th century. Her characters in silk capture vivid facial expressions, and her realistic style greatly influenced Su embroidery in neighboring Jiangsu Province.

After more than 400 years, Gu-style embroidery has been passed down through the generations.

In May 2006, guxiu was listed as one of the country’s national intangible cultural heritages.

Dai Mingjiao, born in 1922 in Songjiang, who acquired all of the different skills, including various stitches, sewing techniques and color selection, was one of the first national representative craft inheritors of intangible cultural heritage guxiu. She embroidered about 40 works and wrote a book named “Primary Exploration of Gu Embroidery Stitches.” In 2005, she was recognized as the “Remarkable Craft Inheritor of Chinese Folk Culture.”

If you find any interest in this rare Chinese art and feel like you want to know more details about it, Songjiang Museum is the place to go. It gathers collections of guxiu, including Han Ximeng and Dai Mingjiao’s works, which are on permanent display. 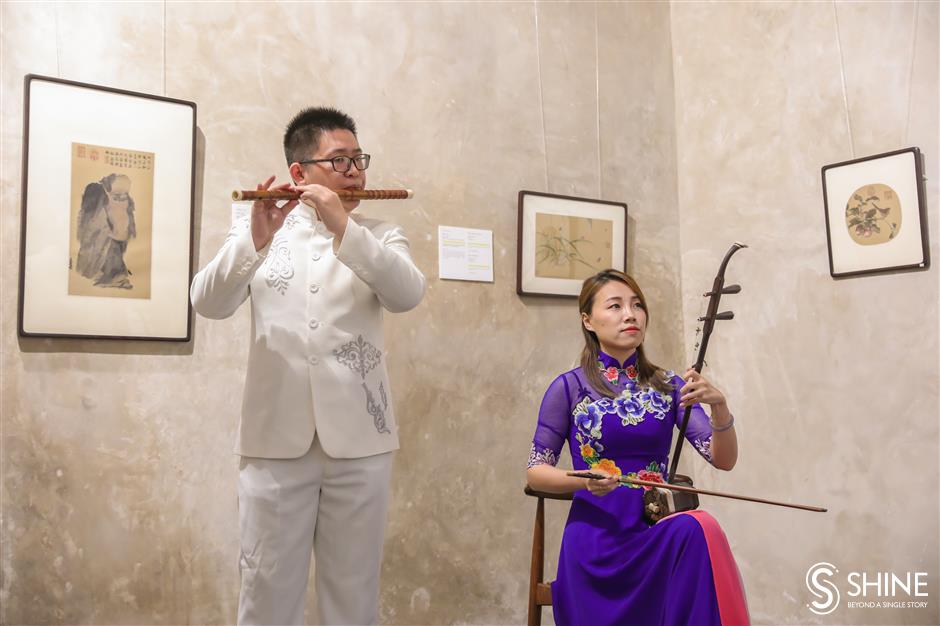 ﻿
Special Reports
﻿
61771
,
Discover the thrills and spills of life under the sailing mast
Expressing the order and rhythm of space in ceramics
Don't like your nose? Try musical makeover
Lancôme mines longevity science for next generation skincare
You can enjoy a ski run in the city, even if the snow isn't real
Robots prepare to take over local stadium
All keyed up to pursue multitude of talents
Onitsuka Tiger unveils retro-inspired fall/winter collections
SMHC makes specialty mooncakes to raise mental health awareness
Reduce your carbon footprint and step up for low-carbon living in Shanghai
EXPLORE SHINE