More than 100,000 military and civilian participants gathered in Beijing on October 1 for a military parade and mass pageantry to celebrate the 70th anniversary of the founding of the People's Republic of China.

Six soldiers, a rancher from Songjiang and students from Donghua University took part in the celebrations which were reviewed by President Xi Jinping. Shanghai Daily introduces some of them.

Honored to do his duty in Beijing

Lu Junjie, an assistant policeman with the Songjiang Public Security sub-bureau, was too excited to sleep the night after he was told of his formal enrolment in the National Day military parade. “I am to represent Shanghai and Shanghai’s police officers. I feel it a great honor and am determined to fulfill my duty,” Lu wrote in his journal.

When asked how his participation in the military parade went, Lu said: “I learned that to work with the greatest care is a prerequisite to success. As a member of the phalanx of soldiers, I’ve marched out for inspection by President Xi Jinping. But as a policeman of the public security system, I will continue to receive reviews from the people. So I will treat my daily work with the same importance I attached to the goose-steps and arm swinging I did in the parade.”

When Lu returned to Songjiang from Beijing, he took part in the National Day security work as a police patrol officer. 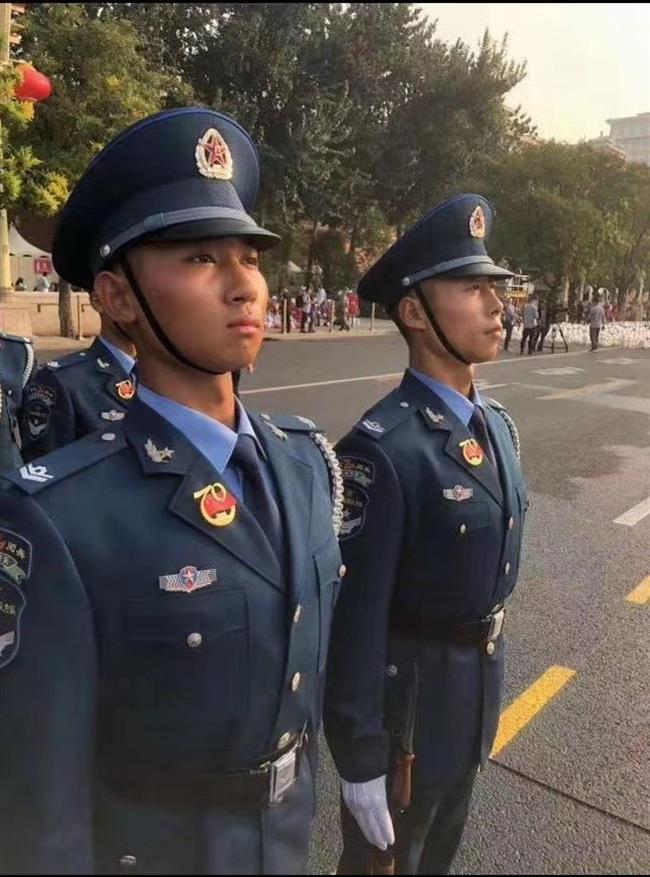 Lu Junjie (left), an assistant policeman with the Songjiang Public Security sub-bureau, feels honored to do his duty in Beijing.

Chen Tao, a retired soldier from Datieqiao Village, Sijing Town of Songjiang District, joined the National Day military parade on October 1. Standing at 1.82 meters tall, Chen’s position of Row 7 Line 12 was right in the center of the reserve service phalanx.

Chen recalled he had been busy with training during his stay in Beijing since March 9 and didn’t have time to taste the famous Beijing duck once. As National Day approached, his rest days were reduced to two half days from the former two days a week. During the rehearsal period the two half days were spent on training.

Chen returned to Songjiang on the night of October 4. After a brief get-together with friends, he was ready to resume his job as a narrator at the popular science hall of the Songjiang District civil defense office.

Chen’s daily work includes promoting knowledge on disaster prevention, the use of escape equipment and how to cope with air raids during times of war. 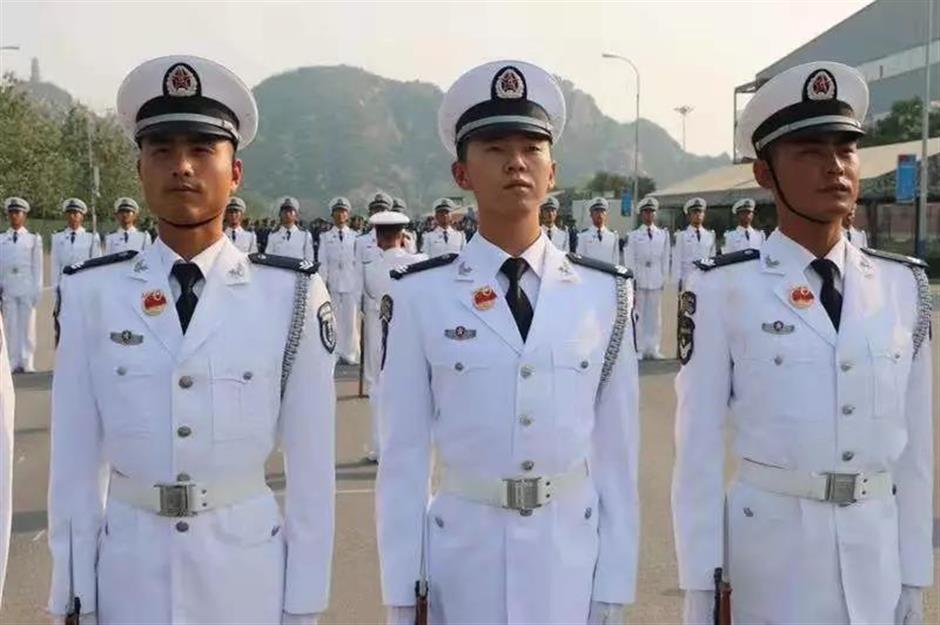 Grandfather’s pride and joy on TV

When Zhang Hao, a PLA soldier from Songjiang, appeared on TV during the National Day military parade with his reserve soldiers phalanx at around 10:54am on October 1, Zhang Songming, his grandfather, got so excited. The elderly man stood up and uttered: “Look, it’s Zhang Hao.”

Fifty-one years ago, Zhang Songming attended the National Day military parade as a PLA soldier celebrating the 19th anniversary of the founding of the People’s Republic of China.

Though separated by more than 1,200 kilometers, the grandfather and the grandson were connected.

“There will be so many soldiers and my grandson may not be captured by the camera. But I still want to watch the broadcast and wish he may appear on the screen. He told me several days ago he will be in Row 2 Line 22 of the 12th phalanx,” Zhang Songming said before the live broadcast.

Zhang Hao received a notice in March informing him that he was to take part in the military parade training.

He needed to bind a sandbag weighing 4 kilograms on each of his feet during the training.

“I’m concerned that the training might be tough, but I know he can endure that. My grandson is our pride,” said Zhang Songming. 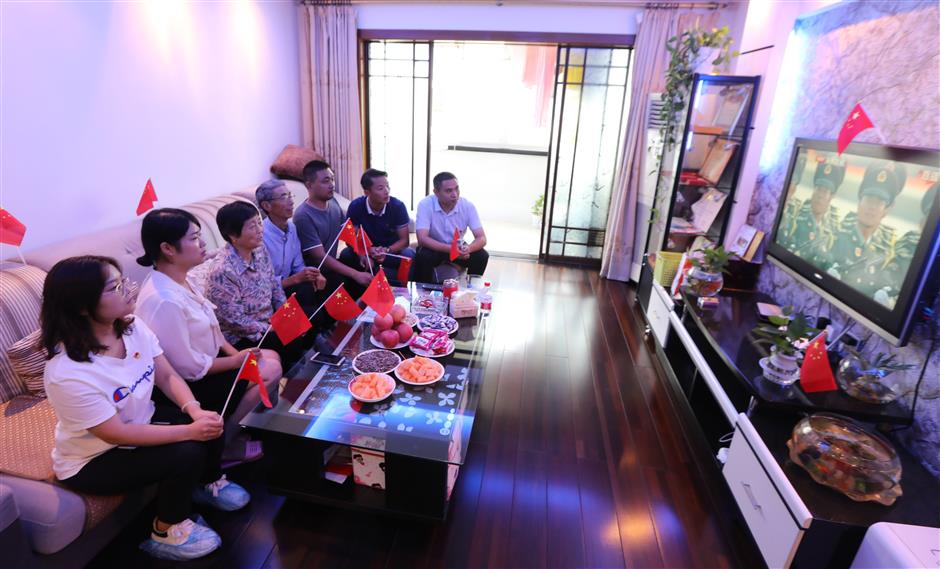 A broken foot couldn't stop him

Wang Yifan is the only college student among the reviewed soldiers from Shanghai. He was recruited into the PLA Army Aviation Corps in 2016 and retired last year. His outstanding performance during his service won him the opportunity to attend training for the military parade.

After two months of tough training, Wang passed the Shanghai regional selection process in May and headed for Beijing with another 39 soldiers from Shanghai.

“Among us 40 brothers-in-arms, someone missed the National Day military parade. The reason is not because they are less tough but because the training is demanding,” said Wang.

The soldiers endured about 10 hours of training every day under the scorching sun of summer in Beijing. Once Wang’s soles of shoes broke because of the high temperature.

Some soldiers fainted due to tough training and hot weather. Whenever Wang found his vision turned darker before his eyes, he would use a rifle butt to hit his feet and regain his composure.

To march with louder goose-steps, Wang exerted more effort but finally caused a fracture on his right foot 40 days before the National Day parade.

“If I took a rest and waited till my foot recovers, I might miss the parade,” said Wang.

So he continued the training in spite of the pain in his foot.

After seven months of training, his perseverance finally won him membership in the reserve soldiers phalanx for the National Day parade. 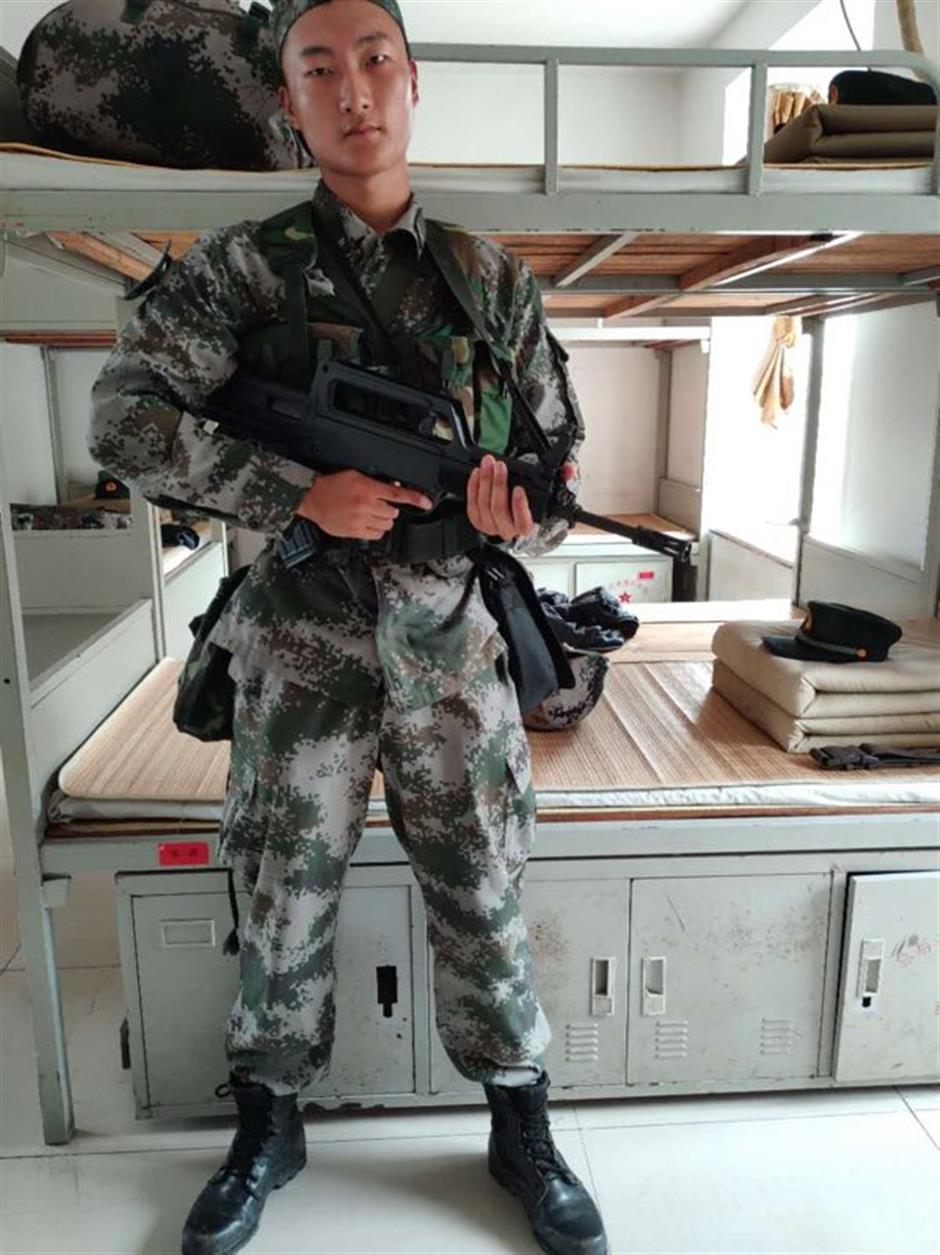 Wang Yifan is the only college student among the reviewed soldiers from Shanghai.

Li Chunfeng, a rancher operating a home farm in Songjiang District, was on a float with other agriculture producers during the National Day mass pageantry. As the camera captured the passing float, Li waved a bunch of flowers and saluted his motherland.

Owner of a family farm in Yaojing Village, Maogang Town, Li is among the first generation of home farm ranchers in Shanghai to take the initiative to explore moderate-scale farm operations.

Li has won multiple prizes on home farm management throughout the years. The yearly income of Li’s farm reached 480,000 yuan (US$68,015) in 2016 and keeps increasing.

Li Chunfeng, a rancher operating a home farm in Songjiang District, was on a float with other agriculture producers during the National Day mass pageantry.

They had been selected through harsh competition. The eldest are senior students born in 1998 and the youngest are the post-2000s generation.

To prepare for the pageantry, the students spent their summer vacation on body movement and facial expression training. 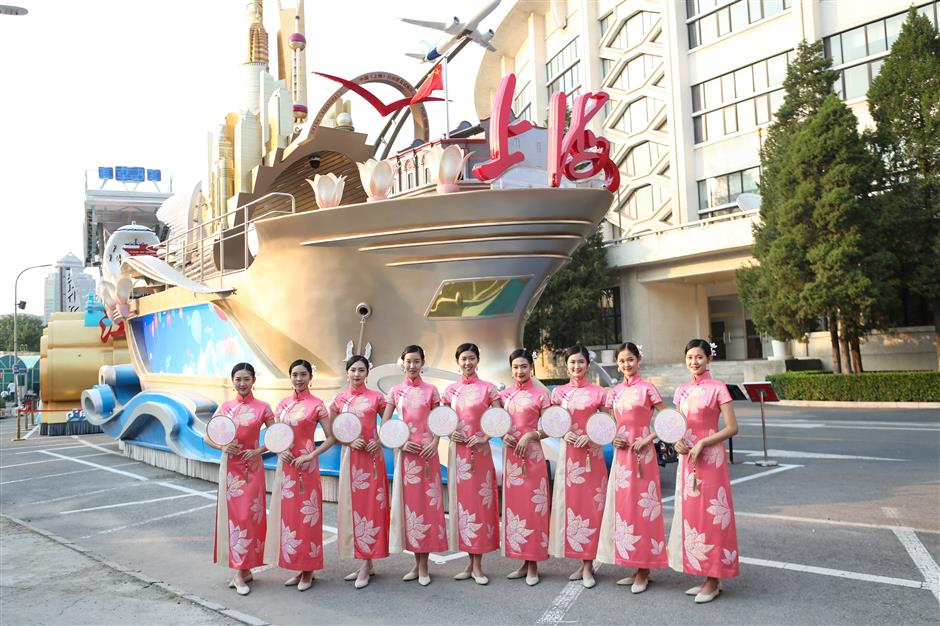 Special Reports
ADVERTISEMENT
61771
,
Guide for overseas Chinese students during COVID-19 pandemic
A cemetery that celebrates life and death
Nile threatened by waste, warming, dam
Enchanting abode in idyllic tranquility
Connecting nature, culture and people with design
Fancy footwork: An embroiderer finds her niche
How overseas Shanghainese go through outbreak
Counseling eases psychological toll of outbreak
'Support troops' guard the doors to the city
A guardian of the light ... and of hope for Wuhan
EXPLORE SHINE