The China Community Construction Exhibition Center in Hangzhou has reopened after months of renovation. The center, in Jinchaidai Lane in a revamped mansion, is the first community museum of its kind in China. Visitors can study the history of China’s urban residential committees, a basic unit of neighborhood organization.

“We have updated the historical materials and applied new interactive media in a bid to make the content more attractive and enriched,” said Yang Hongjun, office chief of the center. 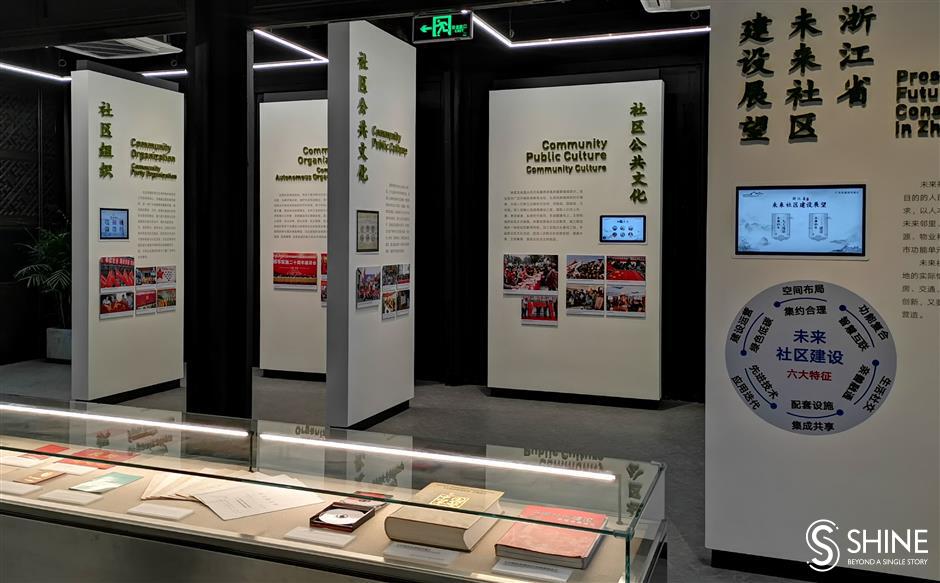 Visitors can get to know the development of China’s residential committee at the China Community Construction Exhibition Center in Hangzhou which has reopened to the public after months of renovation. 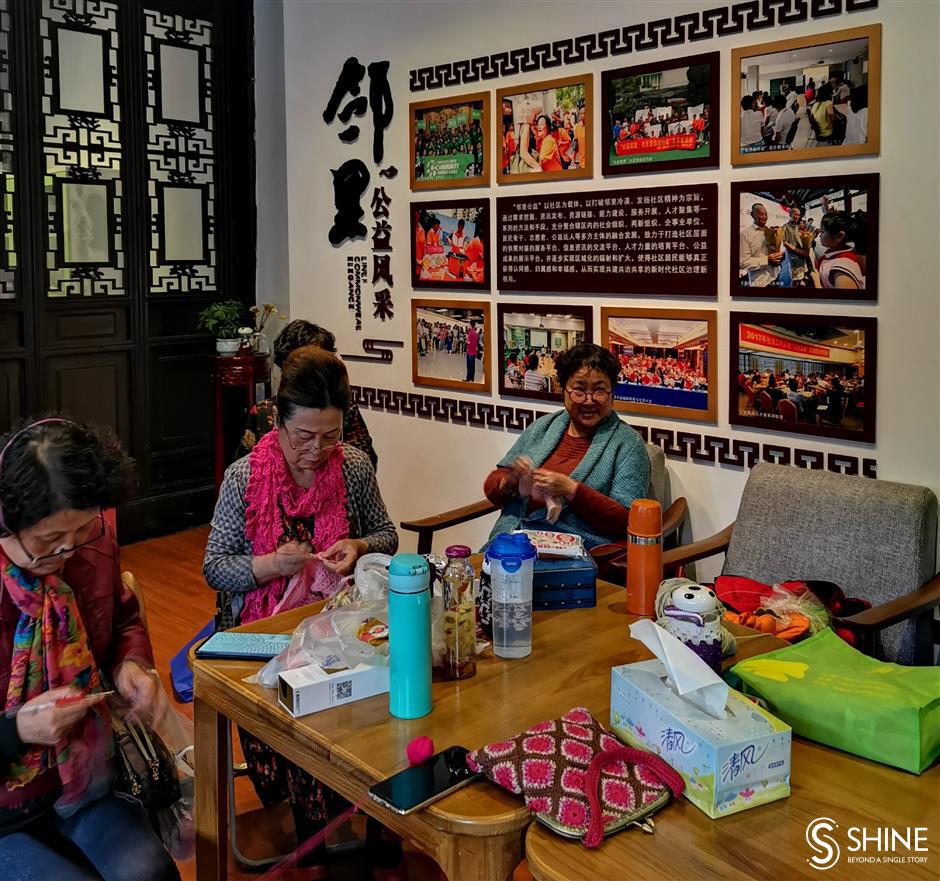 The center comprises two parts. Along with the museum, it also includes committee offices for the Shangyangshi Community.

After the founding of the People’s Republic of China, the government was looking for a new, better neighborhood organization system, and thus the residential committee was born under local adaption in Shangyangshi.

On October 23, 1949, residents from the community elected their own committee members, headed by Chen Fulin.

The establishment of the Shangyangshi committee heralded a new chapter in China’s civil history, as it broke the centuries-old baojia (保甲) system, an ancient community-based system of law enforcement and civil control which dated to the Song Dynasty (960-1276).

One bao (保) consisted of 10 jia (甲), which in turn consisted of 100 households. Leaders of the bao (保) were given authority to maintain local order, collect taxes and organize civil projects.

Also under the system, if one household was found guilty and the other 99 households didn’t report the offense to the authorities, everyone would be severely punished.

In 2007, the Shangyangshi committee was confirmed as the country’s first residents’ committee by the State Ministry of Civil Affairs. Two years later, the China Community Construction Exhibition Center was established.

Along with artifacts collected from all over China, the center also uses interactive technology to recreate different trials of grassroots democracy in China, such as the douxuan (豆选)system, literally “election through beans.”

This system was deployed during the War of Resistance Against Japanese Aggression (1931-45). Every candidate stood with a bowl, and residents cast beans to select the candidate they wanted.

“Interactive exhibits let visitors learn about history in a more vivid way,” Yang told Shanghai Daily. “Many democratic trials are less-known among people today, but they did push forward the development of residential community organization.”

Ever since the first residential committee was established, Hangzhou has always led in neighborhood administration. Another community that has evidenced the city’s status is Xiaoying Lane Community, also one of the highlights in the center.

In the 1950s, the central government launched a movement aimed at improving public sanitation. One day in 1958, Chairman Mao Zedong dropped in at Xiaoying Lane and praised its adherence to the Patriotic Health Campaign, which made the lane known around China.

Nearly 70 percent of the buildings in the lane were in disrepair years ago. But after a facelift and more emphasis on green space, the neighborhood brings back nostalgic feelings inspired by the white walls and black-tiled roofs.

In 2014, the lane was a pilot zone for trash sorting. The community has no trash bins as garbage collectors come at a fixed time every day. Residents have to sort garbage and bring it out when the collectors come.

After three years, the community’s garbage-sorting rate has reached 80 percent. Now, the Xiaoying Lane model has been expanding to other communities in Hangzhou.

For years, a large number of Hangzhou’s residential communities have built their own libraries, family activity centers and senior health-care clinics in efforts to enhance social services. 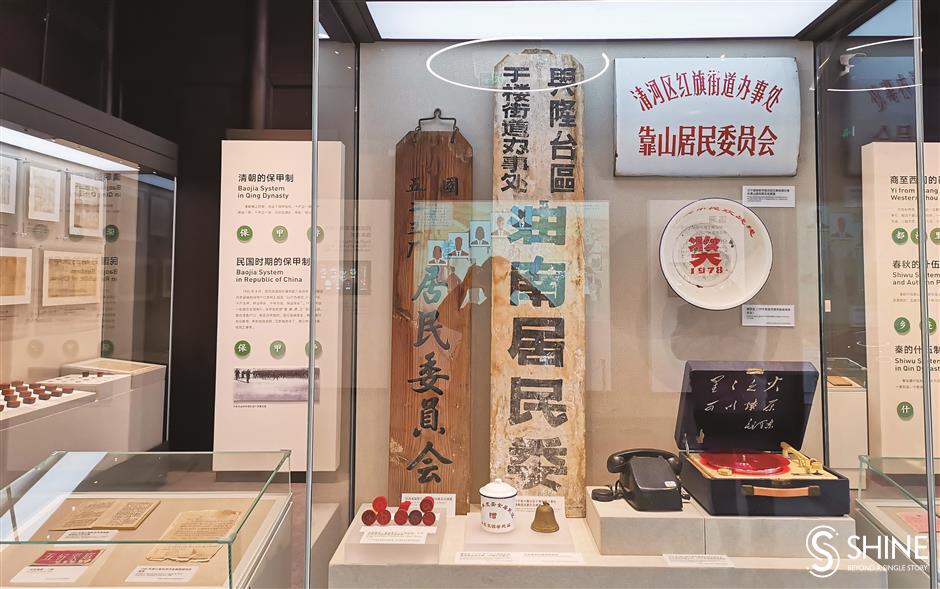 Community-related artifacts from all over China

For instance, in the Hongmei community, a medical clinic was established with one doctor, several nurses and “smart” medical machines. Some 120 senior residents use the clinic to handle their health needs.

It has trained a team of health workers to do routine medical checks of blood pressure and other vital signs. The data are uploaded into a “smart” machine and transmitted to the smartphones of doctors to assess.

Patients can either visit the clinic for health checkups or receive in-home exams if they have mobility problems.

Today, such community developmental merits are on display in the exhibition center in hopes of inspiring residential committees from other cities and provinces.

As for residents from neighboring communities, the center is a rendezvous for entertainment activities. A stage at the entrance has evolved into a gathering place for amateur performers. When Shanghai Daily visited, a senior Yueju Opera troupe was rehearsing.

“We also set up a room for public study. Non-governmental organizations are invited to give classes in photography, website design, new media operation and news writing,” Yang said.

Special Reports
ADVERTISEMENT
61761
,
Guide for overseas Chinese students during COVID-19 pandemic
A cemetery that celebrates life and death
Nile threatened by waste, warming, dam
Enchanting abode in idyllic tranquility
Connecting nature, culture and people with design
Fancy footwork: An embroiderer finds her niche
How overseas Shanghainese go through outbreak
Counseling eases psychological toll of outbreak
'Support troops' guard the doors to the city
A guardian of the light ... and of hope for Wuhan
EXPLORE SHINE