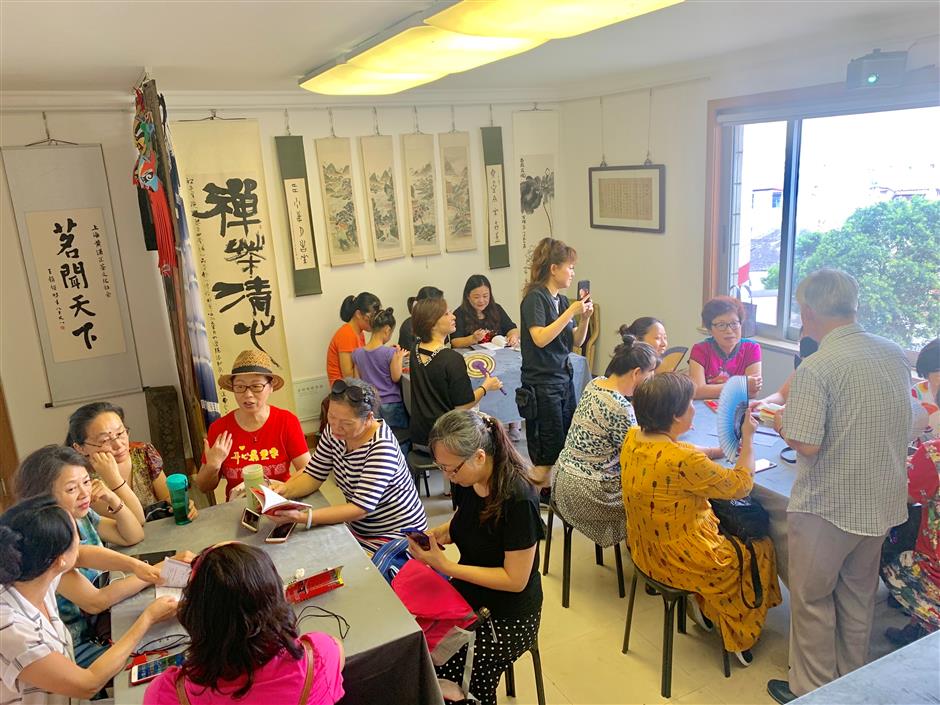 Shanghai dialect classes are popular. People of all ages come together to learn the lingo.

Li Jun, 67, and his 62-year-old wife Ren Xianyun moved from Beijing to Shanghai about 18 months ago to be near their son, who has settled here.

At first, they found it hard to fit in.

“Shanghai dialect is a main barrier,” said Ren. “In the beginning, we felt like we were in a foreign country when we went to the wet market. We didn’t understand what people were talking about. That was hard.”

The couple toyed with the idea of moving back to Beijing but eventually decided to stay here after taking classes in Shanghai dialect.

“Thanks to the classes, we can understand 25-50 percent of what is said in conversations with local people,” said Ren. “Our progress in speaking the dialect has allowed us to get closer to the city.”

Shanghai dialect is quite distinctive from official Mandarin. A version of Wu Chinese, it actually dates back 2,500 years. As Shanghai became an international melting pot, its dialect absorbed many foreign influences.

For example, there are shadows of English words in it, like “roof window,” “stick,” “cement” and even “gander.” In Shanghai dialect, they would respectively be pronounced lo fu cang, si dik kak, si meng ting and gang du in Shanghai dialect.

In standard Mandarin, they would be lao hu chuang, shou zhang, shui ni and sha gua.

“Shanghai dialect expert Ruan Henghui, who teaches our classes, always said that if a person can speak Shanghai dialect, it will be much easier for him or her to learn a foreign language, especially in pronunciation,” said Zhang Jianming, 54.

Zhang is the founder of a nonprofit organization called Shanghai Oriental City History and Culture Collection Center, which sponsors free classes in Shanghai dialect. He is also the owner of the Old Shanghai Teahouse near Yuyuan Garden, a popular venue currently closed for urban reconstruction. 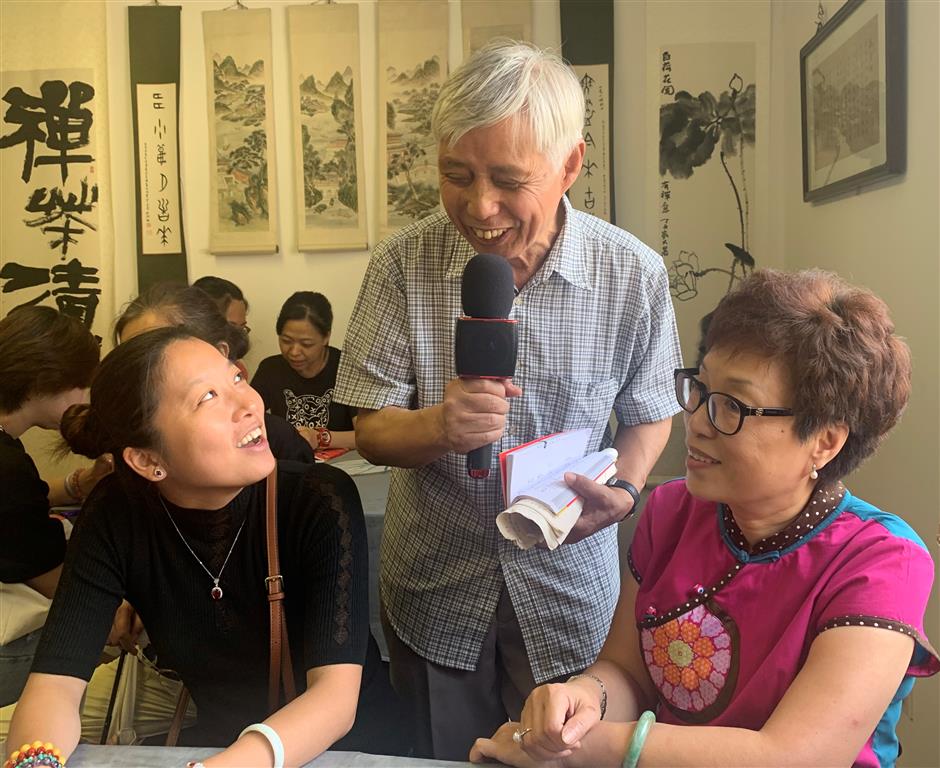 I first encountered Zhang and several elderly volunteers of the organization two months ago at an outdoor fair themed “Shanghai Old Street.”

The event, part of the 21st China Shanghai International Arts Festival, displayed homespun articles: vintage radio and television sets, tin toys and other nostalgic paraphernalia that Zhang and his team members had collected.

One of the volunteers at the fair was Li, garbed in a long gown and selling fruit candies no longer commonly found in urban markets.

Intrigued by the group, I recently dropped in to visit the organization’s workshop. I was surprised to learn that the fair is just one of about 1,000 activities the group organizes every year. They include the classes in Shanghai dialect.

“I first joined the Shanghainese class in October,” said Li. “The teacher taught us the traditional standards by which Shanghai mothers choose their sons-in-law. We learned how to say the criteria in Shanghainese. I recorded the lessons, which I shared with my wife at home.”

Li and Ren try every means to learn and use the local dialect. They listen to bus stop announcements, given in both Mandarin and dialect, and greet their neighbors in Shanghainese when they meet in the elevator.

The Shanghai Oriental City History and Culture Collection Center also helped the couple make friends in Shanghai. One of those friends is Shanghai native Liu Zhengang, who is in his 70s.

At the earlier fair, he showed me how an antique wood press was used to squeeze fresh fruit juice.

“Dialect and culture are closely connected,” Liu said when I met him again at the center. “When I was a child, I always listened to the Shanghai People’s Radio. Many programs were spoken in Shanghai dialect. My generation didn’t learn Shanghai dialect. We acquired it naturally from our dialect-rich environment.”

Liu said teahouses were an important venue for keeping people posted and nurturing a traditional lifestyle. With his father, Liu often went to a teahouse when he was young. While his father sipped tea and enjoyed a performance of pingtan, or Suzhou-style storytelling, Liu ate snacks and played with other children there.

“People from all walks of life visited teahouses,” said Liu. “Many policemen even came to exchange information there.”

As a patron of the Old Shanghai Teahouse since 2016, Liu said the venue features décor drawn from Zhang’s collection. An old sewing machine, a refrigerator and fan, oldies recorded on vinyl and Shanghai-style hot sauce noodles at the teahouse flooded him with childhood memories.

“The space is long and narrow,” said Zhang. “In the tunnel-like teahouse, customers take a journey through time and space.”

Although the teahouse is closed now, Liu and other patrons of the venue have joined the volunteer team at Zhang’s nonprofit organization.

Many middle-aged and younger natives of Shanghai also attend the Shanghai dialect classes. One of them is 41-year-old Zhang Ying.

“Although I am a Shanghainese, there are many basic words such as ‘me’ that I always pronounced wrong, let alone many traditional words forgotten by my generation,” she said.

As a member of actor-singer Andy Lau’s fan club, Zhang spreads the word about the nonprofit organization to other club members. Many bring their children to the Shanghai dialect class or to traditional handicraft lessons taught there.

“We are a group of like-minded people though we are of different generations,” said Zhang Ying. “We learn traditions from the elders, while they learn new things from us.” 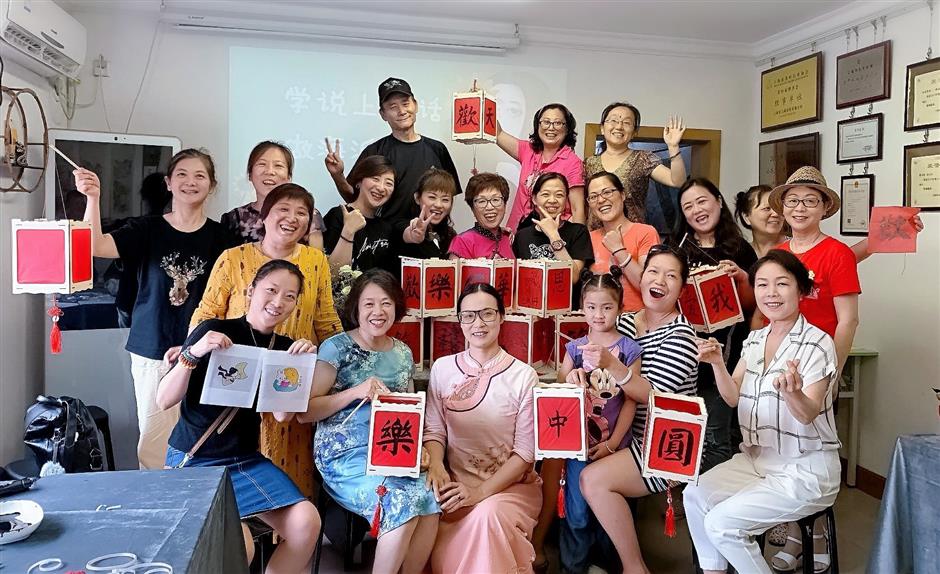