Men waking up to the beauty of makeup

Finally, Chinese men are waking up to makeup.

From teen idols in boy bands, who share lipstick colors in front of the camera, to male beauty bloggers teaching men how to use different brushes, the signal is loud and clear — makeup is no longer exclusively for women in China.

Foundation, eyebrow, contour and highlight, David Kong, 30, goes through each step, every morning before he goes to work.

“Sometimes I’ll add eye shadow to make those puppy dog eyes. Eyeliner is a no-no, because it makes me look sissy,” said Kong, who works for an overseas select shop based in Shanghai.

After applying foundation, he uses concealer to hide blemishes, contours his nose and jawline, and adds highlights to the cheekbones and chin. The whole look is finished with a quick hair spray.

“It usually takes about 40 minutes,” he said. “I never see it as a burden. Making up is fun, which makes me look great. Of course, I still look great without makeups.”

Makeup was uncharted territory for Chinese men, but that is changing.

A 2019 beauty economy report, based on Tmall’s database and CBN Data, revealed that many Chinese men have tried facial cosmetics, such as foundation, concealer, lipstick and eyebrow pencils. Men’s cosmetic sales on Tmall has grown 89 percent, compared with skincare, fragrance, hair care and oral care. At the same time, men’s makeup brands have increased by 56 percent.

The men’s makeup market was estimated to be worth about 1.9 billion yuan (US$270 million) at the end of 2019, but it is still only a small fraction of the US$71 billion global cosmetic industry.

In 2017, China surpassed South Korea to become Asia’s biggest men’s cosmetic market. From 2016 to 2019, the sales volume of men’s skincare and cosmetics in China grew by 13.5 percent every year, way higher than the global 5.8 percent.

As more and more men show an interest in makeup, “the male beauty economy” has huge potential for cosmetic companies looking to develop men-only products. 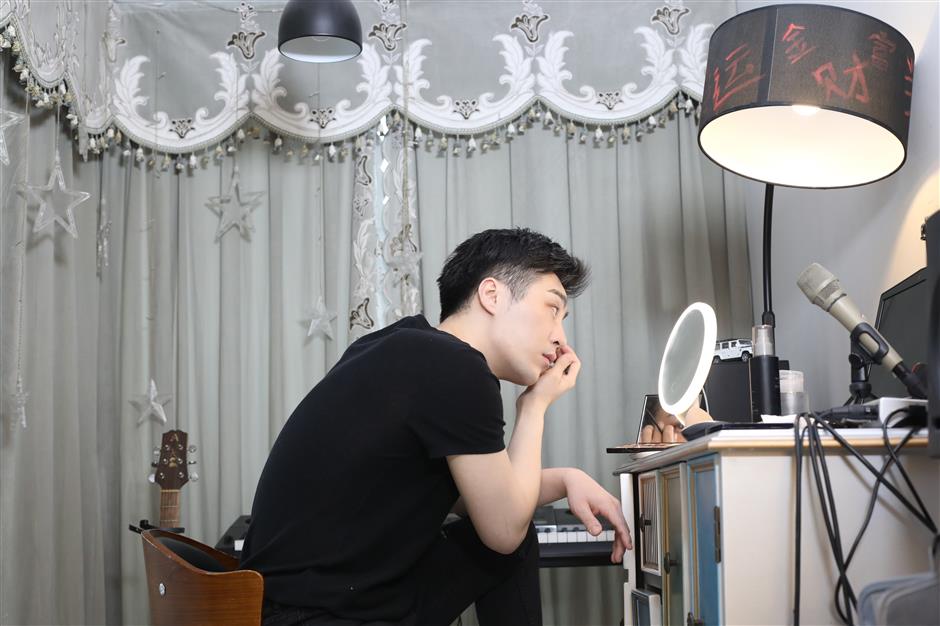 Making up has been a morning routine for male employees who want to look good in a workplace.

A long list of cosmetic brands, local and overseas, have turned to male stars as image ambassadors in China, including M.A.C, Estee Lauder, Lancome, YSL and Elizabeth Arden.

“Male stars have a bigger influence than females in China, because their fans are mostly girls,” said industrial observant Tata Xu. “At the same time, these ambassadors wearing makeup are sending a message to the public: It’s the beauty of gender-fluid.”

Makeup giant Maybelline changed its iconic slogan, “Maybe she’s born with it” to the new tagline, “Make it happen” in 2016.

About 10 years ago, Chinese men were afraid of being called “girly” if they used facial cleanser but, today, male beauty bloggers on various social media sites are reaping millions of loyal followers.

Beauty blogger Wu Shuyu, 27, has expanded his fan base on Weibo to more than 850,000 followers.

Wu shares his beauty tips, teaches girls and boys how to make up for different occasions and gives reviews on new products like lipsticks and foundations.

“I’ll recommend what to buy in a most cost-effective way,” he said.

“Male bloggers can focus more on studying cosmetics and share some really good stuff with their fans, while females would care more whether they look pretty on the camera,” said industrial insider Chen Ying from a marketing firm.

“In fact, consumers today do not care about gender. What they do care about is if she/he is convincing and interesting enough.”

Male bloggers are encouraging more men to be self-conscious about their looks, saying it is OK to cover a blemish before a big meeting or wearing makeup to look good for a blind date. 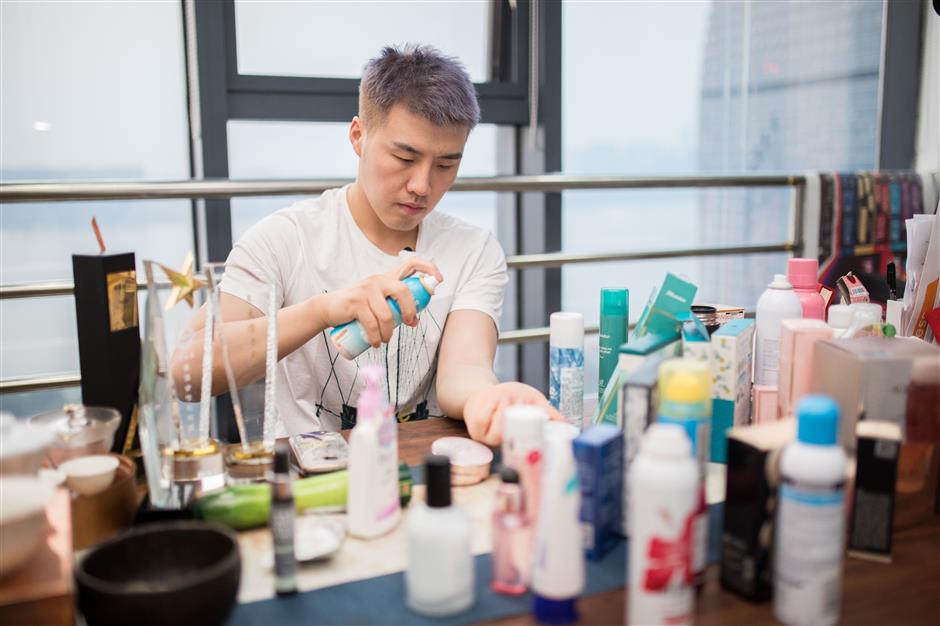 A male beauty blogger tests a product before he gives a review.

A survey conducted by Asia’s largest plastic surgery app reveals that 80 percent of people polled agree that a good-looking face can bring better career development, and 90 percent think it’s easier for beautiful people to get quicker promotion and higher pay.

The reality is reshaping the aesthetic, which has put image pressure on men, who are turning to cosmetic products as a stress reliever. Under the great impact of pop culture and star power, men are also “valued and judged by appearance.”

In South Korea it’s common to see men in makeup.

“Even in the masculine industries like car or engineering, South Korean men have a habit of using cushion foundation every day,” said Kevin Chou, a makeup artist from Taiwan island. “In China, the male makeup ratio is much lower, but there will be more because the younger generation is more tolerant and open to new things. They care about their appearance and would like to use simple methods to make them look good.”

And others think the rigid ideas about gender and sexuality are breaking down. Designer Shi Dao wears makeup every day and he is openly gay.

“It’s the new wave that has challenged the stereotype of women and men. I’m happy to see the progress that our culture is having,” he said.