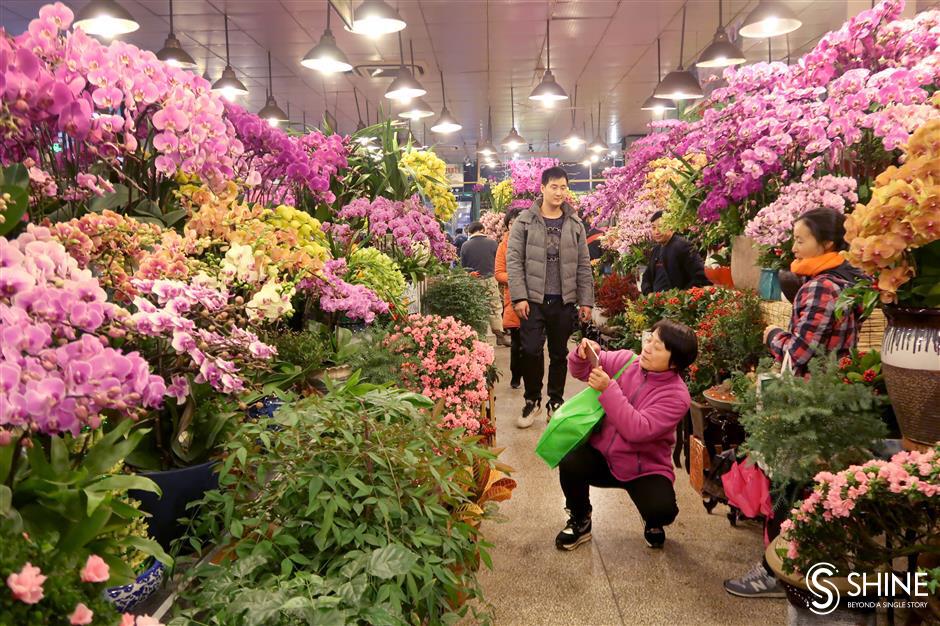 In the run-up to the Lunar New Year, crowds of people flock to flower markets to buy plants and blooms as gifts and home décor. One of the most popular venues is the Qinqing flower market.

The market on Qinzhou Road in Xuhui District has been operating for almost two decades. Its stalls are filled with the holly, lilies, wintersweet and other colorful plants, permeating the environment with delicate floral fragrances. Birds in cages sing.

Popular as this market is, the Year of the Rat will usher in its demise.

According to market staff and stallholders, the market will close on February 15. A notice posted on the market gate explains that the site is a fire hazard and that its location is incompatible with urban development.

“I will miss the place very much,” said a 46-year-old stallholder surnamed Guo.

I met her as I strolled through the market, taking in all the festive spirit.

Guo, a native of Anhui Province, has been operating a stall at the market with her husband since 2008. Prior to that, the couple sold plants at the Jiangyin Road market in Huangpu District, one of the first of its kind in Shanghai after the nation’s reform and opening-up policies.

In its heyday in the 1980s and 90s, the Jiangyin Road market drew as many as 100,000 visitors in one day. Apart from local residents, many foreigners came to the market to experience a slice of local life.

That market was shuttered at the turn of the century because of urban redevelopment.

Guo first came to Shanghai in 1997, intent on trying to make more money in the city than she could back in her inland rural hometown.

It’s hard work. She operates her flower stall from 8am to 6pm every day except during Spring Festival. She loves listening to music, which she has playing in her shop.

“I feel like I am tied to the flower store,” she said.

Her stall is at one end of the market and mostly sells potted plants — peonies, tangerine trees, moth orchids, daffodils, azaleas, kaffir lilies, cyclamen and anthurium. They are all classic Chinese New Year plants.

According to Guo, reddish plants, such as pink moth orchids and red anthurium, are the most popular this time of year because red symbolizes good fortune and joy in the Chinese culture.

“The week before Spring Festival is the busiest time of the year for me,” Guo told me. “People go on a crazy spending spree and don’t care about prices.”

Guo recalled one day before Lunar New Year’s Eve when the shop was busy from dawn until dark. When she and her husband were finally able to call it a day, they were exhausted and ready for a late dinner. But by that time of night, all nearby restaurants were already closed.

“I felt sad at that moment,” said Guo. “Life is not easy. Looking back, I think my greatest achievement in 20 years is raising our son.”

Unlike other migrant workers who head to cities and leave their children behind with relatives, Guo and her husband insisted on bringing their son to Shanghai with them. Now in his 20s, the son often lends a hand during the holiday rush. 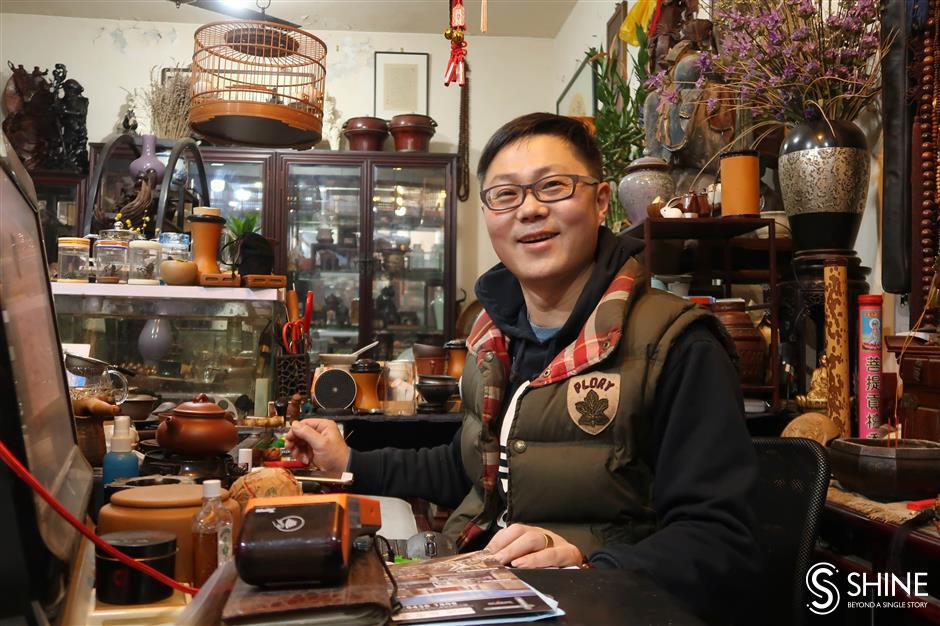 Stallholder Huang, 46, is emotionally attached to his market workplace of 14 years.

While I was talking with Guo, a middle-aged man who sells rosewood stands, purple-clay teapots and Chinese folk nick-nacks in another stall dropped by to give Guo some snack food.

I followed him back to his shop.

About 10 birdcages hang at the door of his stall, and katydids chirped in cages on a table. The stallholder, surnamed Huang, invited me to tea in an atmosphere filled with the fragrance of burning incense.

Now 46, he has spent the last 14 years in the flower market.

“Flower markets flavor our lives,” said Huang. “City life is fast-paced and stressful. Flower markets are full of things that aren’t necessities but give people happiness.”

Indeed, just wandering around a flower market evokes the joys of color, fragrance and birdsong. Flower markets in a teeming city are an ideal, if small, classroom in the natural world. Many parents bring their children to the markets to give them a break from the urban rat race and “stop to smell the roses.”

However, nowadays, there are fewer and fewer such “classrooms” at neighborhood doorsteps.

The Qinqing flower market won’t be the first casualty of changing times. It seems the crush of urbanization just doesn’t have room for such oases of calm.

Their disappearance strikes at the soul of the city. It may be easier to order plants online and have them delivered to the doorstep, but the inner tranquility that comes from strolling through a flower market is lost.

“The difference between buying plants online and purchasing them in a market is like drinking tea from glass bottles and teacups,” said Huang. “The former shows a purpose while the latter exhibits an attitude toward life.”

Huang is not averse to the digital age. He posts texts and photos related to his business on the popular social platform WeChat. The messages now announce a clearance sale.

“I am emotionally attached to the place,” said Huang. “Over the past decade or so, I have made many friends from all walks of life here. Books that I have collected since I came to work here sit on that shelf. Look how many there are!”

No matter how tough or busy life is, Chinese people temporarily drop all the cares of the world during Spring Festival. Huang said he will be driving to his hometown Nantong in neighboring Jiangsu Province for the traditional New Year family reunion and will worry about his future when he gets back.