Student trio has eyes on the archery target 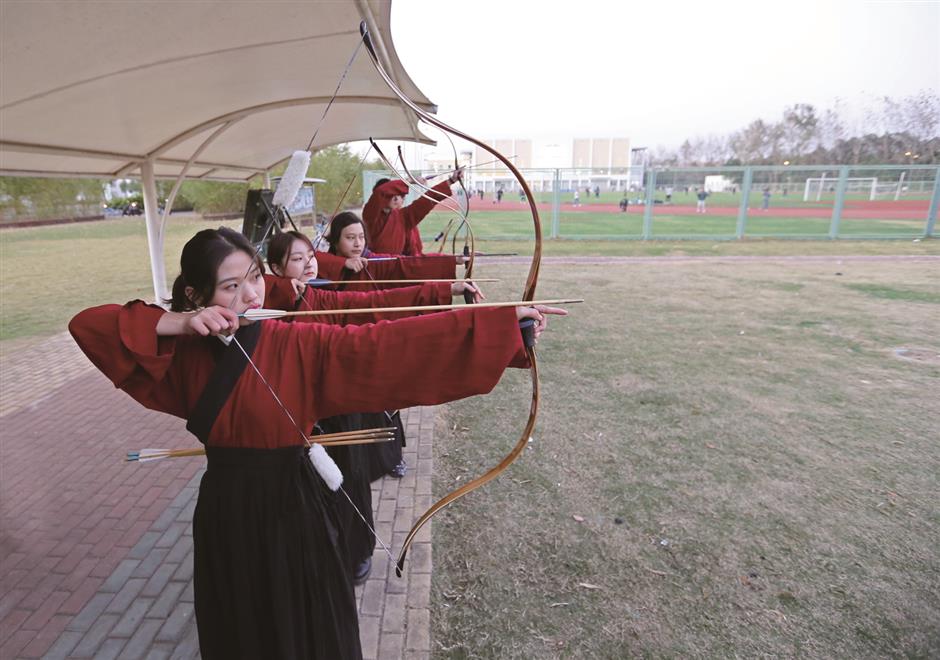 Students of the Chinese archery team of Shanghai University of International Business and Economics aim at archery targets.

A traditional Chinese archery target, the Hou square target, contains four squares that diminish in order and are painted in white, black, red and yellow in sequence. A hit on the outermost white zone, or the “Hou,” scores one point; a hit on the next black zone, or the “Hu,” scores three points; both the second inner red zone, or the “Zheng,” and the innermost yellow zone, or the “Di,” give an archer five points when he hits the target. When two archers end in a draw, the one with more Di shots wins.

Wang Xin, a sophomore at Shanghai University of International Business and Economics, kept the scoring rules firmly in her mind when she started out as a scorekeeper for the school’s Chinese archery team.

Wang Xin, members of the Chinese archery team of Shanghai University of International Business and Economics, practice archery at the school’s archery range.

“A noble man stands aloof from worldly success. The only obsession he might have is with archery.”

“If a noble man shoots an arrow and fails to hit the target, he blames no one else but himself.”

Wang recites these quotes, just two of a number about the sport from ancient Chinese verses that she has committed to memory.

Wang became fascinated with archery after she was selected for the school’s super popular archery class. Her enthusiasm was such that she was also able to join its Chinese archery team. There she met Zheng Zhibin, the team’s captain and a senior student majoring in international economics and trade, and Zhao Zhiyi, a seeded player and a junior studying information systems management.

Still full of admiration for the two, Wang is now herself a mature archer born out of the initial scorekeeper.

Wearing Chinese hanfu (traditional Han clothing) of red top and black skirt, Wang stood on the school’s wintry sunset-bathed archery range with the rest of her team members. She fetched an arrow, raised her bow, exerted her energy, drew her bow, and finally aimed at the target, releasing the string and hitting the mark.

“Some bystanders can’t understand why we bow to the archery targets and to each other. It’s our way to show respect to the sport and to our competitors,” said Wang.

“When you put on your hanfu suit, it’s important to cover the left collar upon the right one. For in ancient China, things on the left were regarded to be more respectable,” Zheng said. 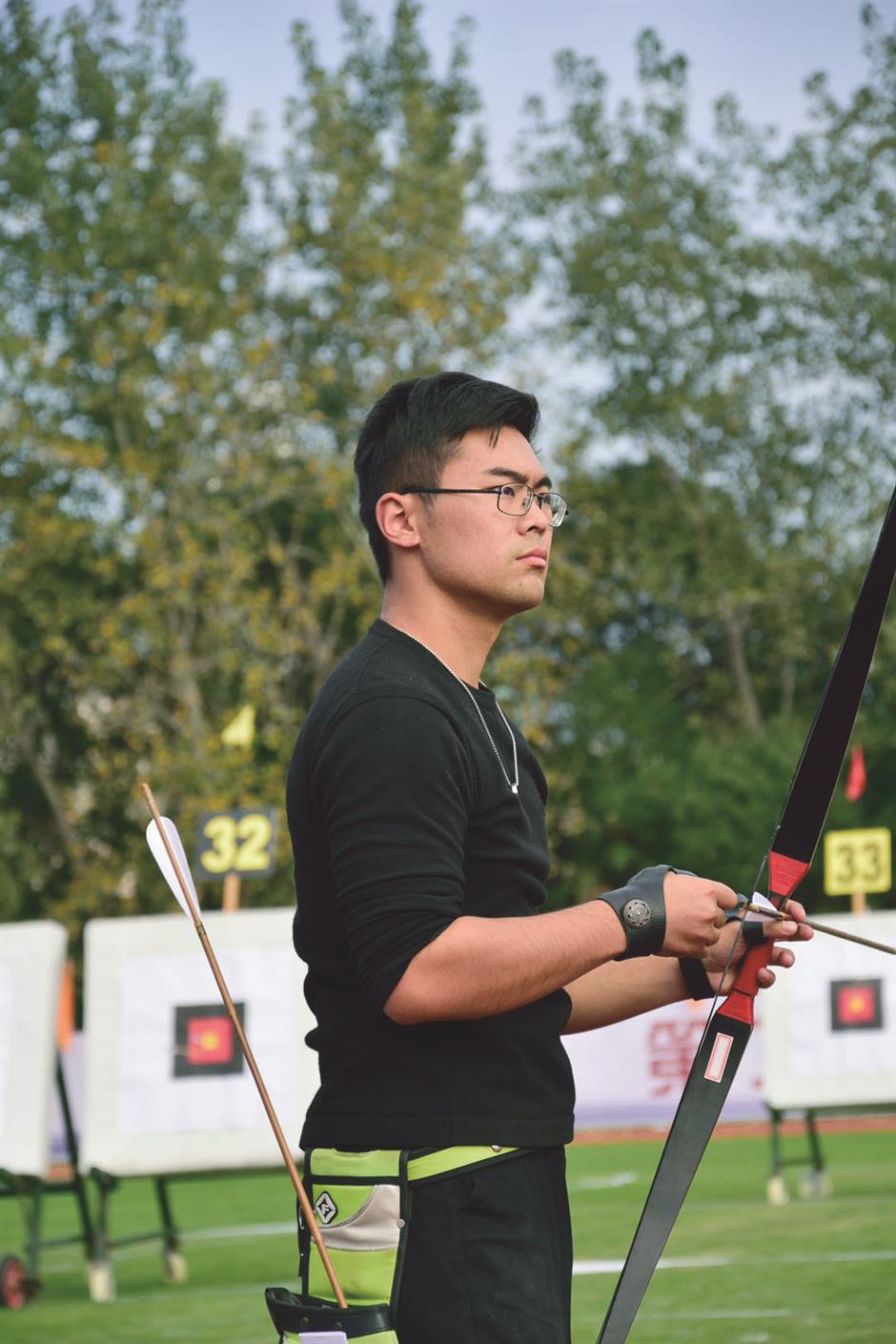 Zheng Zhibin, members of the Chinese archery team of Shanghai University of International Business and Economics, practice archery at the school’s archery range.

That archery is about cultivating the mind is agreed by the three archers.

“Whether I scored well or bad, I would worry about my performance in the next step. Practicing archery is about constantly persuading myself that I will be fine in the next round,” said Zhao. 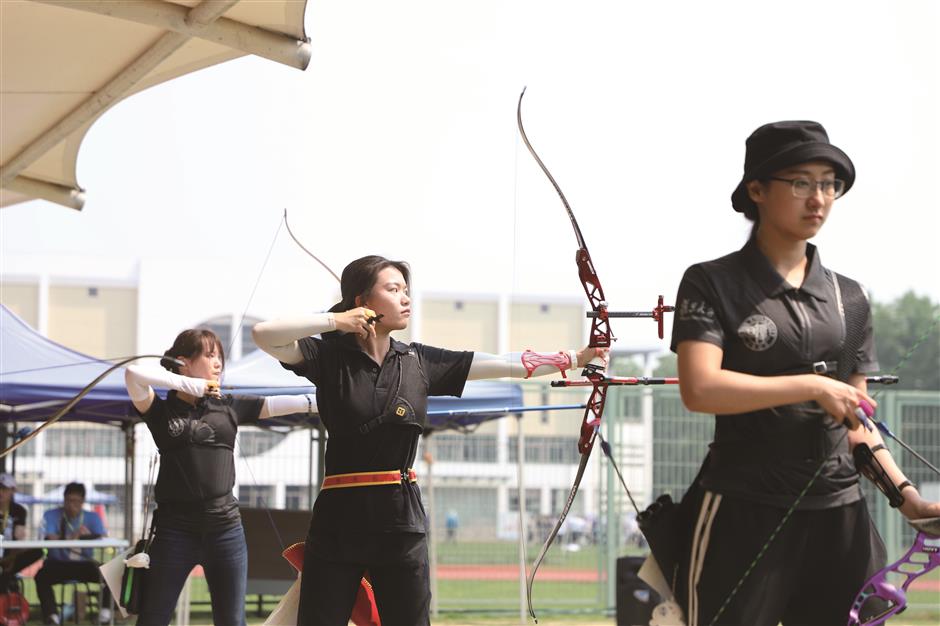 Zhao Zhiyi (second from left), a seeded player of SUIBE’s Chinese archery team, pulls a bowstring and is about to shoot an arrow. Members of the archery team have won multiple awards in the past four years. 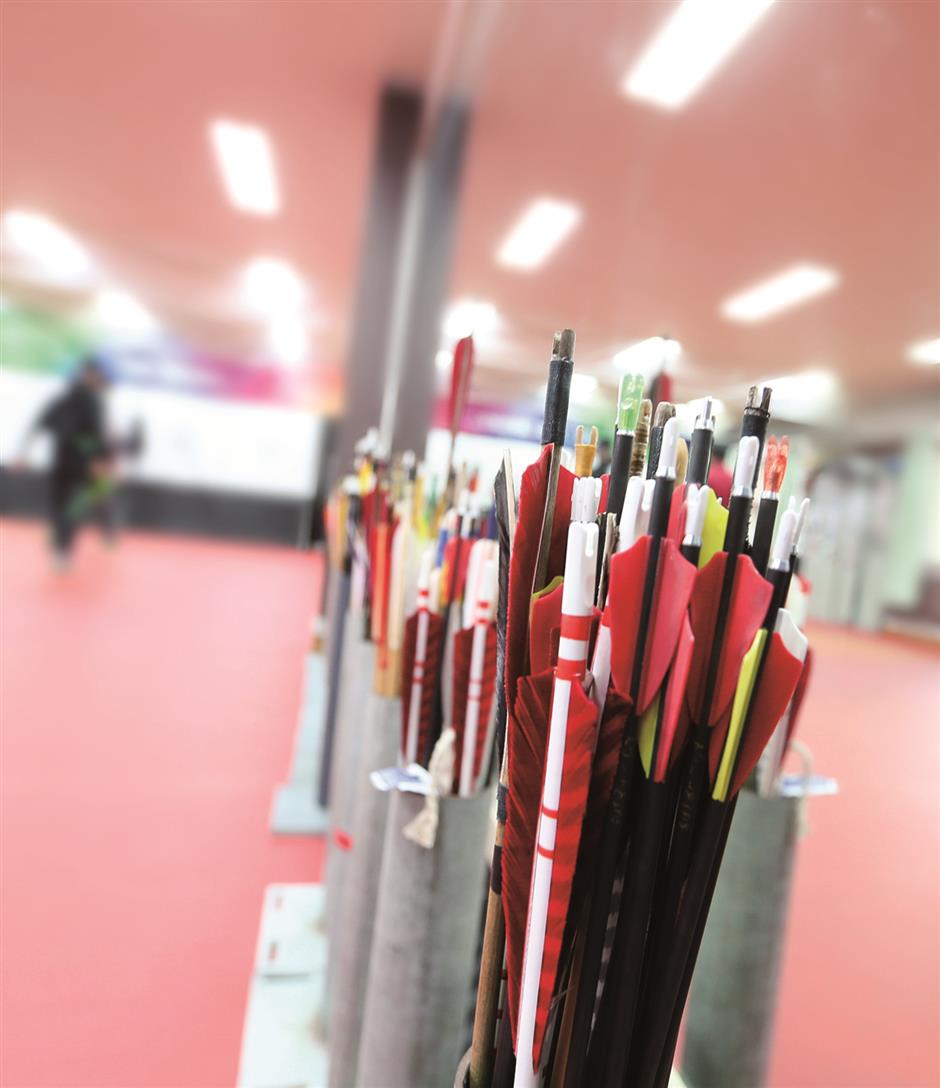 A mental block an archer is prone to have is yellow target panic. The archer, focusing too much on earning a high score, would, similar to a knee-jerking manner, shoot an arrow out as soon as touching the bow and seeing the yellow target without doing the other essential parts of the sport including exerting energy and preparation.

“A good mentality, good skills and fitness are key to practicing archery well. At the beginning, I only had my fitness to count on. I even experienced the yellow target panic. But I am not a person to admit defeat easily. So I persisted and gradually became truly loving the sport,” said Zheng.

Wang finally played a national college students archery championship with her fellow students in Xuzhou in neighboring Jiangsu Province in 2019.

“Once there came a showdown moment when the score of our last arrow would decide whether we won or not, and I was holding that arrow. Though I might not trust myself totally, I trusted my teammates’ words that ‘You skills are excellent.’ Then I shot out the arrow and we won,” said Wang.

It’s now been four years since the university founded its archery team. Besides winning multiple awards, the school and its young archers also focus on promoting the sport among elementary and middle school students, and students at other universities.

“Kids usually attach more direct feelings toward archery. They want to look cool and they want to show their best in front of their parents. I think that’s good,” said Zhao.

“If you want to promote etiquette and moral education among high school students, you might find your teaching materials too pedantic. But Chinese archery, besides being a sport, also teaches you how to be a noble man. I think you will find it an ideal media to teach etiquette and moral sense,” said Zheng. 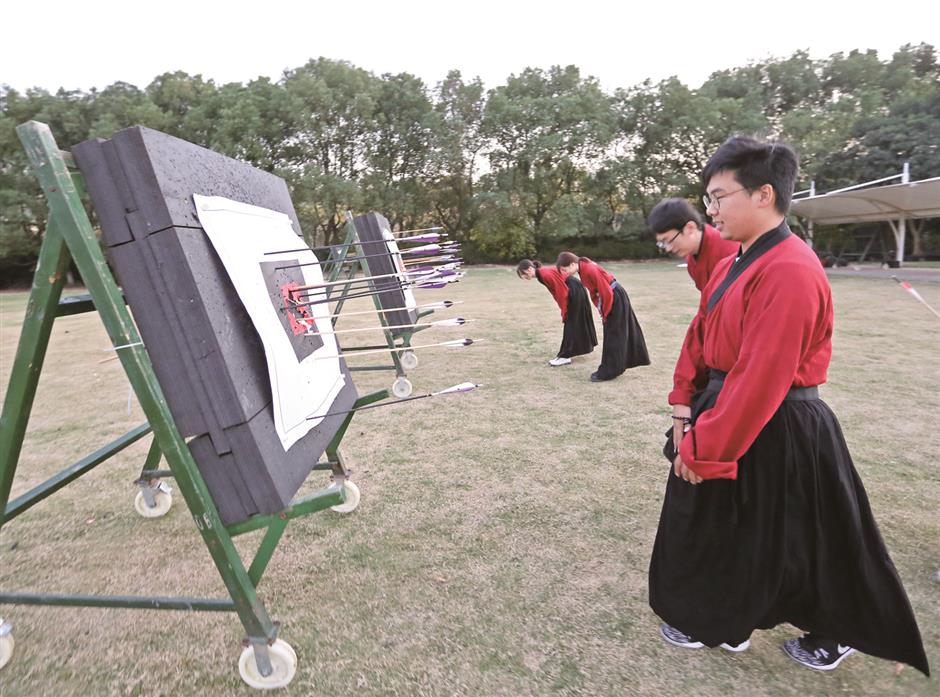