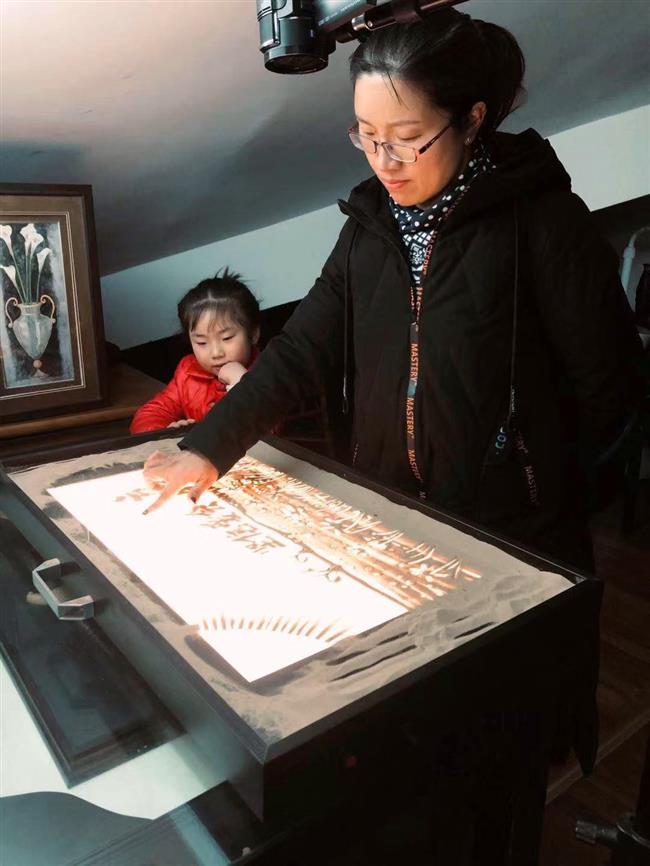 Dai Xiaoling creates the  dynamic sand painting accompanied by her 6-year-old daughter during her home confinement in Shanghai.

The sand painting, created by Dai Xiaoling, a history teacher at Lida Middle School in Songjiang District, includes touching scenes that trace back to the outbreak of the epidemic and the later efforts to help in Wuhan, epicenter of the outbreak.

“I named the sand painting ‘A Determined Victory To Be Won Through Love’,” said Dai.

“Shanghai deployed its first batch of medical staff to Wuhan on January 24. People nationwide and worldwide made donations to make sure there were enough medical supplies.

“The whole country are of one mind and will surely win the battle,” said Dai.

Dai is also a tutor of the manual arts innovation lab of Lida Middle School. Fond of painting and handicrafts since childhood, she taught herself paper-cutting, fabric art, silk painting and a variety of forms of sand painting.

In 2018 Dai created dozens of sand painting works based on the work of renowned Chinese cartoonist Feng Zikai (1898-1975) and sent one of them to Feng’s daughter, Feng Yiyin, as a gift.

When students and teachers from the East London Science School in the UK paid an exchange visit to the school, they deeply appreciated Dai’s sand painting works and took one as a gift.

Dai returned to her hometown in Anhui Province on January 20 to spend Chinese New Year with her parents. When news of the lockdown of Wuhan reached her, Dai felt heartbroken and monitored the updates of the epidemic daily on her cellphone. She was especially moved by the strength of her fellow Chinese in fighting the virus.

“I hoped I could use sand as a pen to warn those who slaughter and dine on wildlife. Meanwhile, I wanted to express my gratitude to the frontline medical staff and philanthropists who made donations,” said Dai.

She spent three days to create the sand painting during her home confinement in Shanghai. She studied how to use the software, created designs, videotaped her creative activity and edited the film.

“To win this battle without smoke or gunpowder, quite a few people are making their efforts. As a teacher, I also have responsibility to join the battle, with my skills and specialty,” said Dai.

Special Reports
ADVERTISEMENT
61771
,
61922
,
61924
,
Guide for overseas Chinese students during COVID-19 pandemic
A cemetery that celebrates life and death
Nile threatened by waste, warming, dam
Enchanting abode in idyllic tranquility
Connecting nature, culture and people with design
Fancy footwork: An embroiderer finds her niche
How overseas Shanghainese go through outbreak
Counseling eases psychological toll of outbreak
'Support troops' guard the doors to the city
A guardian of the light ... and of hope for Wuhan
EXPLORE SHINE