Modern technology has been a savior in keeping people entertained while outings and personal contact are limited due to the novel coronavirus epidemic.

Many pass the time at home binge-watching TV shows or indulging in marathon viewings of movie series. Others find an escape in video games.

But more casual players or even those who have never played games before have become hooked on the latest Nintendo game “Animal Crossing: New Horizons.”

The game, the fifth main title of the “Animal Crossing” franchise, is so far the most popular of a series that has been around for almost 20 years.

“Animal Crossing: New Horizons” provides a virtual haven for people during the novel coronavirus pandemic around the world.

Louisa Huang, a 35-year-old Shanghai white-collar worker, is a typical casual player. Before purchasing “New Horizons,” her Nintendo Switch — the video game console platform on which the game is released — had been in idle for quite a while.

“In fact, I didn’t know about the game until I discovered that many friends were obsessed with it,” she says. “I searched for it online and found that the graphics are really cute, so I bought it. Several days later I found myself becoming hooked.”

The game has become one of the highest-grossing Switch games.

Its price has soared along with its popularity. When the newest version was released on March 20, the average price of a common package was around 350 yuan (US$49) on the e-commerce platform Taobao.com. After peaking at 709 yuan, it’s now selling for about 550 yuan.

So what is this game?

Like the previous “Animal Crossing” titles and many other life-simulation games, players seek to build a simple lifestyle and enjoy a community of animals.

In “New Horizons,” players are put on a deserted island. They earn money by various methods, such as picking fruit, fishing and mining. They make furniture and design their own clothes with the help of animals.

Nintendo describes the game as such: “Escape to a deserted island and create your own paradise. Your island getaway has a wealth of natural resources that can be used to craft everything from tools to creature comforts. You can hunt down insects at the crack of dawn, decorate your paradise throughout the day or enjoy sunset on the beach while fishing in the ocean.”

A nice getaway indeed from worrying about coronavirus.

The online game allows players to add other players as game friends, visit their homes, trade materials and interact in real time. Of course, if you are someone’s “best friend,” you can even go to their island, dig up all their resources and make them angry enough to remove you from the “best friend” list.

Huang says she loves the feeling of “building something with her own hands” without survival stress.

“You can always play the game at your own pace,” she explains. “Sooner or later, you will see the outcome of your efforts.”

However, there are many players more serious than Huang. On the social network platform Weibo, the “Animal Crossing: New Horizons” community has gathered more than 72,000 followers, gaining more than 440 million clicks within two weeks.

Players calling themselves “islanders” discuss how to make more money as fast as possible so they can expand their homes. They even form online chat groups to discuss how to speculate on the price of turnips.

Community players also share their thoughts on why they love this game so much. The keyword is “healing.”

“My mom enjoyed the cute graphics of the game, so I taught her how to play,” an anonymous player says. “There is a ‘letterbox’ in the game. If you click on it, you receive a letter from the ‘mom’ of your character.”

She adds: “My mom lost her mother at the age of 15. And this little letter suddenly made her feel that my late grandma was still with her. She locked herself in the bathroom and cried for half an hour. She now plays the game very seriously and takes notes on the materials she needs to decorate the house. I think the game has healed her emotionally.”

The high sales volume of the game around the world — especially in Europe, North America and Japan — perhaps shows that the power of “healing” is much needed in the current stressful pandemic era.

Therapist Xu Peng, who is also an avid video game player, says it is indeed extraordinary for the game to be so popular because it is available only on a more niche platform instead of on personal computers or mobile devices.

He says he believes that the “pure and warm” lifestyle of the game is a great comfort for people who are stressed out by daily pandemic news.

“The gameplay is not complicated, but the gratification it brings is real, no matter if you are a frequent game player or a casual one,” Xu says. “The game encourages players to interact with each other. If you play it absolutely alone, you’ll make progress really slowly. So the interaction fills our need for social contact when we have to keep apart from one another.”

He adds: “After all, people need some kind of escape more than usual during hard times.”

Meanwhile, in late January and February, when China was at the height of its battle with the coronavirus outbreak, another game on Switch, called “Ring Fit Adventure,” also became a national online hit.

The game has two accessories, Ring-Con and Leg Strap, which track players’ movements so that they can clear quests in the game by running, jumping and squeezing or releasing the Ring-Con. Combats in the game require players to perform different exercises, and damage is based on how effectively they finish the exercise.

Because the game combines fitness and role-playing, it quickly attracted the attention of young people denied access to gyms. The game was recommended by fitness instructors and online celebrities. It provoked widespread online discussion until it was eventually superseded by “New Horizons.” 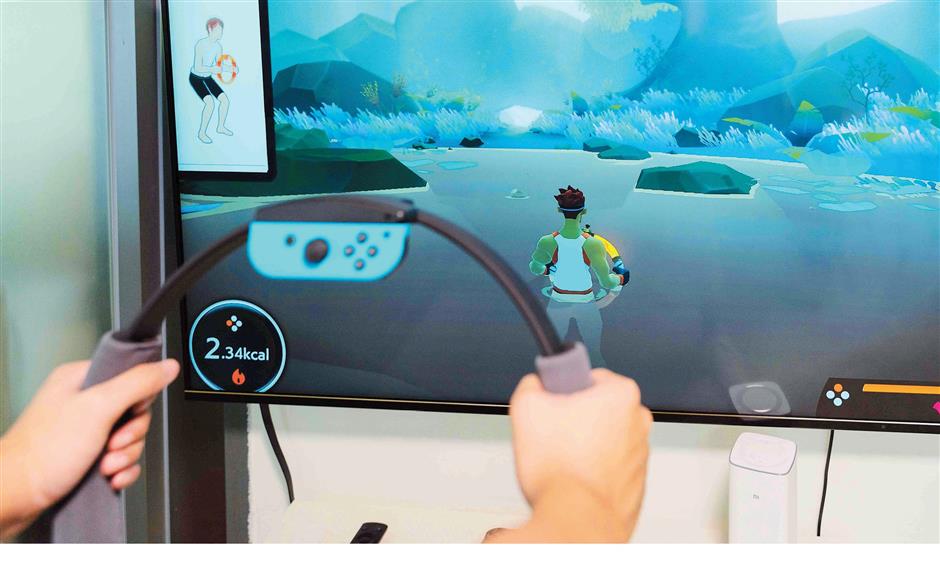 A player can explore the “Ring Fit Adventure” world through keeping fit in real life.

Xu, however, warns that games are only a temporary respite from the adverse effects of limiting personal contact, not a permanent replacement.

“Video games are good supplement but they can never fully replace real life,” he says. “As we say, ‘easy come, easy go.’ Gratification we get from games can dissipate rapidly. What we need to do now is to readjust our lives to avoid psychological gaps.”

Xu explains that pain is often caused by situations beyond our expectations and control. When people fix on firm expectations, uncertain reality can strike back hard.

“Most people believe that life will always become better, but actually that’s often not the case,” he says. “Life sometimes gets stuck or even goes backward. Both are perfectly normal, and we need to be prepared for that.”