Medic on call: from terrorism to COVID-19

Much has been written about the medical heroes at the forefront of the coronavirus outbreak. But their individual stories never fail to strike a deep chord in our homage to basic humanity.

Meet Hu Yuekai, who has been at the front line of infectious disease for 20 years.

When the city of Wuhan was hard hit by the novel coronavirus and was in desperate need of medical workers, he immediately volunteered to go to Hubei Province, but he was turned down because he had just returned from a medical-aid assignment in Pakistan.

While he may not have been at the front line of the outbreak, his contribution to the national effort didn’t flag. He took up a battle station at his home workplace, the infectious disease department at Huashan Hospital.

When part of the hospital’s medical staff was deployed to Wuhan and others went to work at the Shanghai Public Health Clinical Center in suburban Jinshan District, those who remained shouldered a heavier workload and responsibility.

They rearranged wards and set aside a whole floor to serve suspected coronavirus cases. Keeping both the special and ordinary wards operating required longer work hours. Hu and colleagues often found themselves sometimes working 36 hours at a stretch and not seeing their families for days.

“Non-virus patients in our wards, suffering from diseases, already consumed much of the energy of doctors and nurses,” Hu says. “Then the novel coronavirus comes along and is unlike past flu viruses. It is much more contagious and fatal. So we had to jump in from the very beginning.”

Wearing uncomfortable N95 face masks and protective suits for hours is a big challenge, even for an experienced doctor like Hu.

“It’s so hot wearing the protective suits,” he said. “You end up sweating all over. But the quarantine wards aren’t allowed to run air conditioning.” 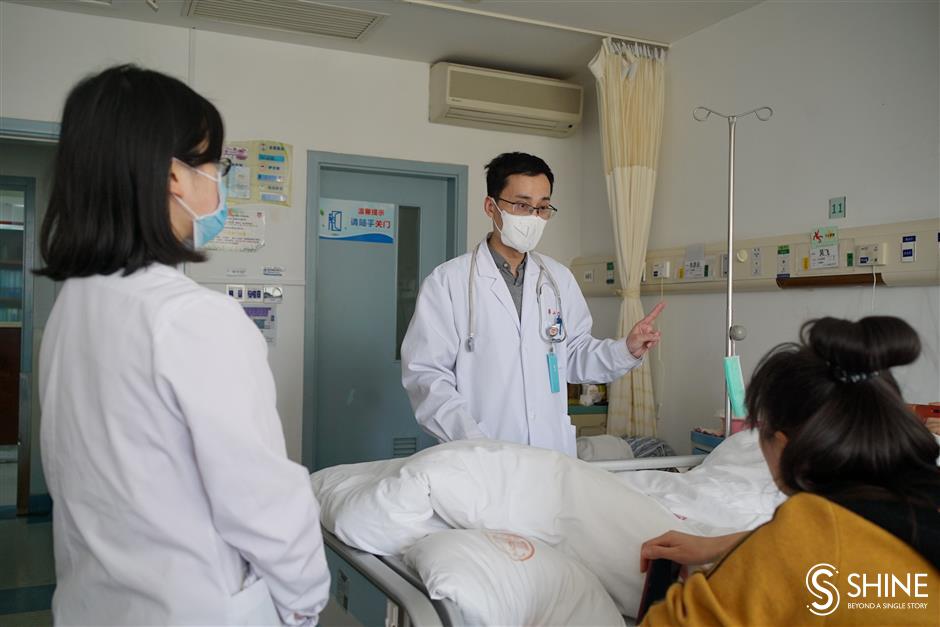 Despite not being at the front line of the novel coronavirus outbreak, Hu Yuekai takes up a battle station at his hospital in Shanghai.

Hu says the infectious disease department is both a battleground and a detective agency. When patients come in with fevers of unknown causes, the department sets to work trying to identify the pathogen.

On the wall of the department hang greetings from patients expressing gratitude to doctors for saving their lives.

Hu recalls the day when a young couple stopped to greet him. At first, he didn’t connect them to a woman he had treated years ago, until a colleague jogged his memory. The woman suffered from a rare pathogen infection that caused high pressure on the brain and respiratory problems. The department treated her to relieve the brain pressure, but her condition worsened and she finally fell into unconsciousness.

When everyone was about to give up, Hu decided to take a risk. He gave the woman a lumbar puncture to extract cerebrospinal fluid from her spine. Upon testing it, he was surprised to discover that she had low, rather than high, brain pressure. He immediately adjusted the treatment plan, and the woman eventually regained consciousness.

“I was actually grateful that her family trusted me fully because doing a lumbar puncture while she was unconscious was a bit risky,” he says.

Hu is a veteran of infectious flu outbreaks. He still remembers that night on his way home from a long emergency room shift when his phone rang. He was asked to return to the hospital as soon as possible because another epidemic had surfaced and required immediate preparation. It was SARS.

But nothing shocked him more than working in Pakistan as an aid doctor, dispatched there by the hospital last year. In May, terrorists attacked a hotel at Gwadar Port, just 180 meters from the hospital where Hu was working. Four hotel staff and a Pakistani marine were killed, and many more injured. Hu stayed for six months, treating Pakistani and Chinese victims.

“Before it occurred,” Hu says, “we were working pretty well, even though the medical environment was really basic — not even as good as a community clinic in Shanghai.”

He said staff were in the hospital at the time of the attack and fearful for their lives.

“I remember some of my colleagues cried and sent their bank-account codes to their families lest they didn’t survive,” he says.

After the attack, Hu and other survivors were transported to a safe house. Scared people crowded in the narrow shelter, hearing only gunshots without knowing the latest conditions outside.

“People started to have some emotional problems, so we, as doctors, had to soothe them,” he says. “Later, we made first-aid packets and distributed them as precautionary aids to locals.”

Hu says he became a doctor because of his mother’s desires. His own interests at the time were finance and information technology. But he has never regretted becoming a doctor.

“When I first entered the hospital, I made rounds of the wards with my mentor,” he says.

“I saw how he could find an entry point from very mild symptoms, then make painstaking analysis to identify the source of an infection. I saw people who had suffered from fever for years with no diagnosis and how my mentor cured them within a very short period of time.”

He added: “Seeing patients go from pain to joy is our biggest gratification.”

﻿
Special Reports
﻿
61768
,
61875
,
Discover the thrills and spills of life under the sailing mast
Expressing the order and rhythm of space in ceramics
Don't like your nose? Try musical makeover
Lancôme mines longevity science for next generation skincare
You can enjoy a ski run in the city, even if the snow isn't real
Robots prepare to take over local stadium
All keyed up to pursue multitude of talents
Onitsuka Tiger unveils retro-inspired fall/winter collections
SMHC makes specialty mooncakes to raise mental health awareness
Reduce your carbon footprint and step up for low-carbon living in Shanghai
EXPLORE SHINE