'So many memories!' The changing face of Shanghai's east bank

Veteran photographer Yao Jianliang never stops focusing his lens on Lujiazui — the area in Shanghai’s Pudong where he grew up; the area he has watched undergo an almost unbelievable transformation.

Now 63, Yao can remember 30 years back, when the riverfront area was mostly paddy fields and rundown farmhouses, and ferries were the only access with downtown Shanghai. Today, his camera captures monumental skyscrapers in an area that came to be called the “Wall Street of China.”

He has snapped hundreds of thousands of pictures of Lujiazui’s ever-changing landscapes. Arranging them in before-and-after combinations, he shows the scale of change in 10 years, 20 years and 30 years.

Since mid-March, Yao has been posting daily updates of his Lujiazui series on his WeChat Moments as retrospective and tribute to Pudong’s dramatic development. 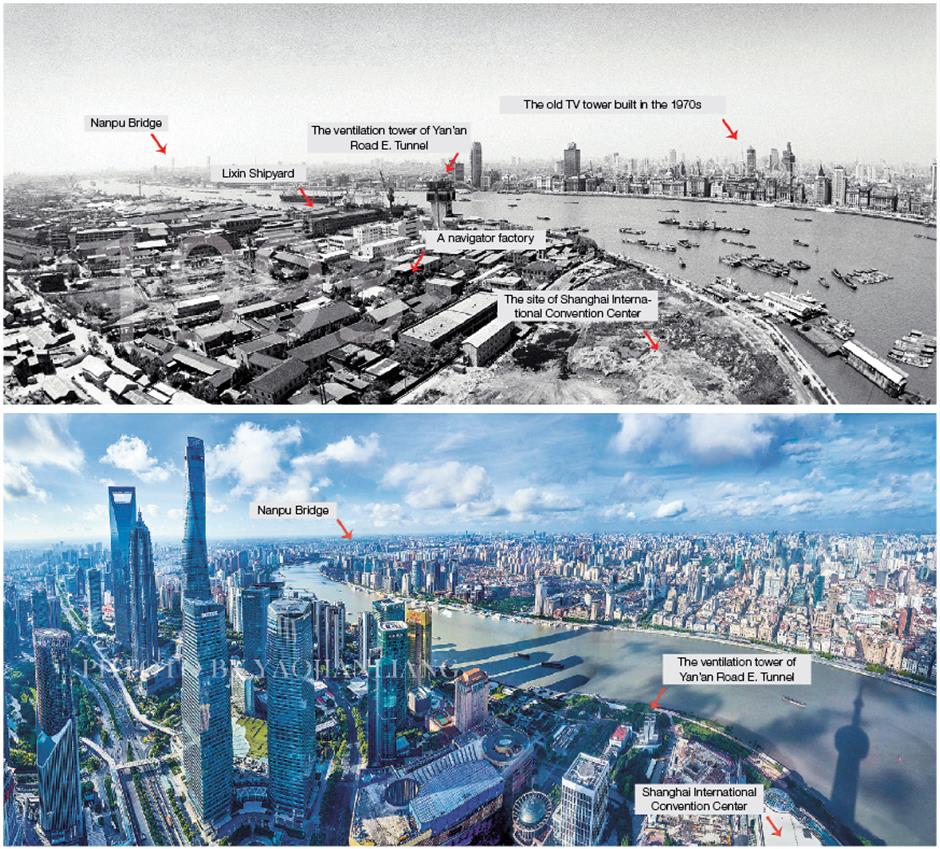 The before-and-after combination shows the changes along both banks of the Huangpu River between 1993 and the present.

“The younger generation may look at Lujiazui and think it has always been a vibrant hub and business powerhouse, but we, the older generation, know what happened,” he said. “Pictures, more powerful and honest than words, tell stories. The camera captures and freezes moments, and history is created when you put together all the photos taken over the years.”

Not all that many years ago, Pudong was the poor cousin of Shanghai. In his childhood, Yao and others there looked across the Huangpu River and dreamed of one day living a cosmopolitan life.

Even in the 1980s, it was said most people “preferred a bed in Puxi to a room in Pudong.”

“Lujiazui was so close to the Bund,” Yao said. “But my father was accustomed to describing our visits across the river as an outing to Shanghai. I always wondered why Pudong was not regarded as part of Shanghai.”

The chance to throw off its image as a bumpkin backwater came on April 18, 1990, when Pudong was chosen to pioneer China’s new policies on economic reform and opening-up to the outside world.

Lujiazui was designated to set up a finance and trade zone, putting it at the forefront of the ambitious development plan.

“Of course, I was excited when I heard about it,” said Yao. “But I was also reluctant to say goodbye to the familiar place where I grew up. I just couldn’t imagine how such a place could be turned into a financial hub.”

He added: “At that time, Lujiazui was riddled with shacks with pale-brown roofs. They looked as if moss were growing and hugging the ground. In overseas countries, it requires at least 100 years to build a financial hub, but under the plan adopted, the transformation was reduced to decades. It was a daring undertaking.”

The events inspired him to launch a project to record the changing face of Lujiazui with his camera.

In 1990, Yao took the first picture of Lujiazui from the window of the Fairmont Peace Hotel on the Bund.

“I saw two worlds,” he said. “The Bund was a bustling metropolis, while the other side of the river was a rundown, old town, dotted with wharfs and warehouses. I was still not convinced that such an ambitious goal would pan out.”

He and so many others ended up astounded by what they saw. Pudong’s fast development created an ever-changing, ever-rising skyline.

The 24-meter-high Dongchang Firefighting Tower, built in the 1950s, had capped that skyline for so many years. In the 1990s, it was dwarfed by glittering skyscrapers reaching ever higher all over Lujiazui.

In 1994, the 468-meter-high Oriental Pearl TV Tower opened, becoming the then highest tower in Asia. Yao climbed up 263 meters and took the first bird’s-eye view of Lujiazui.

“It’s so heartening,” he said. “The tower became a landmark of Shanghai’s return to its once-held position as the most prosperous city in East Asia.”

In 1998, the 420-meter-high Jin Mao Tower, built in the style of traditional Chinese pagoda, opened. Ten years later, its height was surpassed by the 492-meter-high Shanghai World Financial Center.

That same year, construction began on the Shanghai Tower, which twisted 632 meters above ground like a giant dragon. The tower was completed in 2014 and today stands as the world’s second-tallest building after the 828-meter-high Burj Khalifa in Dubai.

“I love Jin Mao Tower the most because of its classic, elegant style,” Yao said. “But over the years, I have spent more time visiting the Oriental Pearl Tower to take bird’s-eye photos of Lujiazui from the same perspective. That set of photos best highlights the rapid development of Pudong.” 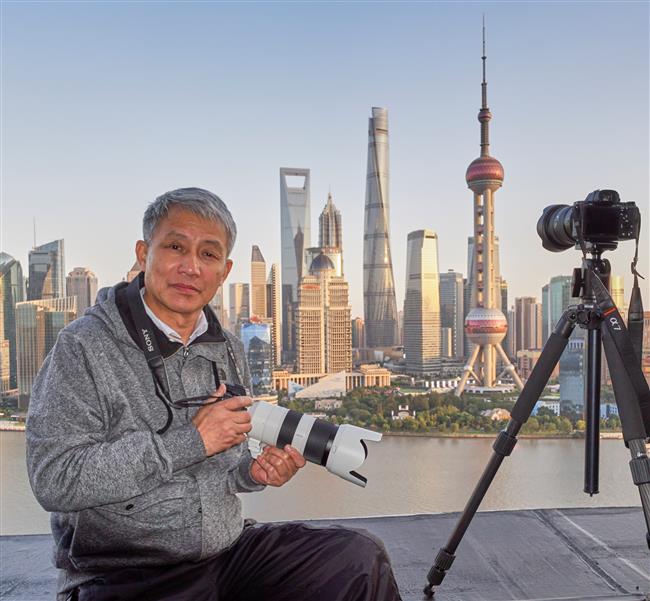 More than just a photographer, Yao is also a Lujiazui history of sorts.

Today, the three highest buildings in Lujiazui all stand on the east of a small road called Huayuanshiqiao, or literally “stone-arch bridge in a garden.”

The road, less than 800 meters long, has a history dating back over 250 years. It is the only road in Lujiazui that has retained its original name, Yao explained.

During the reign of Emperor Qianlong of the Qing Dynasty (1644-1911), Lujiazui was an area of beautiful farmland. One day, a man surnamed Gu stopped by a stone-arch bridge over a little creek. He was so impressed by the rural landscape in front of him that he decided to settle there. That’s how Huayuanshiqiao got its name.

Another road in the center of Lujiazui is Yincheng Road M.

Initially, the road was called Laiyidu, which is pronounced much like lannidu, or “muddy road.” At the time, it was very worthy of the name in the rainy season, when residents’ shoes were habitually covered with mud, Yao said. Despite the muck, the road was a bit of a commercial hub, with shops on either side, including Pudong’s first bank in 1928.

Another place with hidden memories, according to Yao, is Lujiazui Central Greenland, the local version of New York’s Central Park.

It used to be home to more than 3,500 families living in pretty shabby conditions in shacks. Relocation and renovation started in 1996, and one-time slums took on a new look within just 11 months.

“So many slums were bulldozed and replaced by grand lawns,” Yao said. “When the park opened, I woke up early and climbed the Oriental Pearl Tower to take a bird’s-eye view of the park.”

His lens captured a historical building on the south end of the park, set against a backdrop of soaring skyscrapers. “It was the only old building left untouched in the area,” Yao said.

The building, featuring traditional Chinese structure and Western ornamentation, was built in the 1910s as a residence for self-made business tycoon and Pudong native Chen Guichun. But he didn’t live out his days there.

The house was later occupied by Japanese invaders and then the Kuomintang party. After Shanghai was liberated in May 1949, the house was partitioned into several flats housing some 80 families.

“In 1996, I took pictures outside one gate of Chen Guichun’s former residence,” said Yao. “In one, an elderly woman was burning coal. Ten years ago, at an exhibition, I spotted a young woman staring intently at the photo. In tears, she told me that it was her grandmother, and I later sent the picture to her as gift.”

He added: “So many memories! These are the touching stories behind old pictures.” 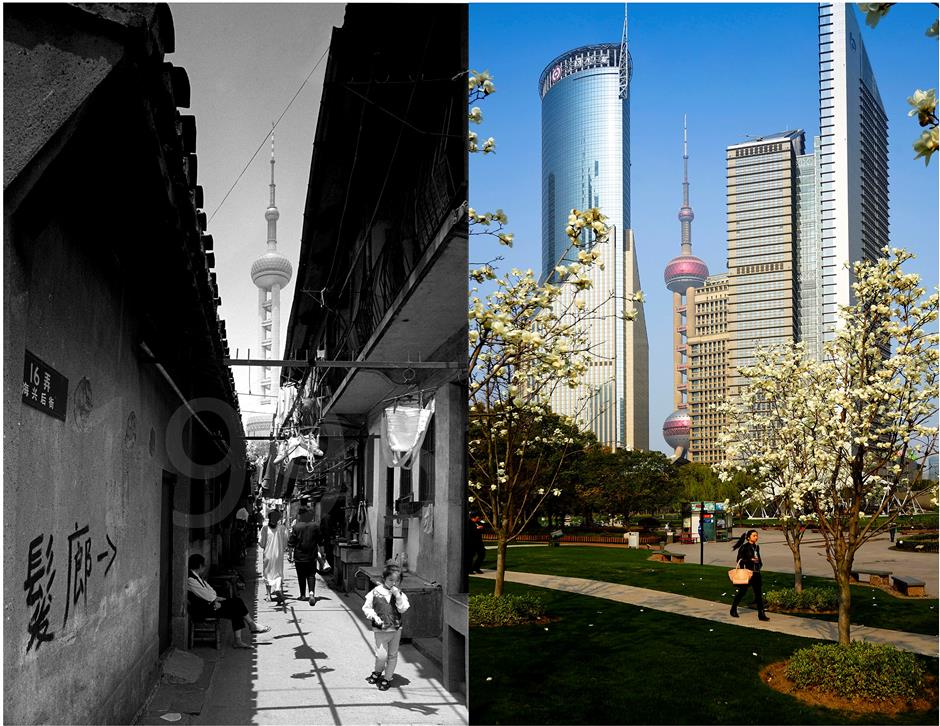 Timeline of 30 years in Pudong

1990: Pudong was chosen as a pilot zone to spearhead China’s policies of economic reform and opening-up to the outside world. It was to host the country’s first bonded zone in Waigaoqiao, its first finance and trade center in Lujiazui and its first export-processing zone in Jinqiao.

1991: DuPont became the first Fortune 500 company to establish a joint venture and operate in Pudong. Nanpu Bridge, the first span to cross the Huangpu River, opened to traffic.

1995: Fuji Bank opened its Shanghai branch in Pudong, becoming the first branch of a foreign bank set up in China. The No. 1 Yaohan Department Store, China’s first Sino-foreign joint retail venture, opened in Pudong, attracting about 1 million customers on the first day.

1996: Intel set up its first manufacturing facility in China with initial investment of US$99 million for the Waigaoqiao plant.

1998: COSCO Shipping, formed by China’s largest fleet of container vessels, was set up in Pudong. Coca-Cola’s largest bottling factory in China was completed in Jinqiao.

2002: The world’s first maglev train for commercial use opened in Pudong.

2003: The number of foreign businesses registered in Pudong reached 10,000. Work on Dishui Lake in the Lingang area started.

2004: Construction of the Shanghai Synchrotron Radiation Facility, known as the “Shanghai light source,” started in Zhangjiang.

2005: The Shanghai headquarters of the People’s Bank of China moved to Lujiazui. The Yangshan Deep-Water Port opened.

2007: Hutchison MediPharma in Shanghai and US-based Eli Lilly signed an agreement on research of new cancer drugs, the first time that a foreign pharmaceutical company entrusted a Chinese company to do new drug research and development. The Shanghai Court of Financial Arbitration opened.

2010: The World Expo was successfully held, attracting more than 70 million visitors across the world. The Shanghai port rose to No. 1 in the world in terms of container throughput.

2011: The foundation stone for the New York University’s Shanghai campus was laid in Pudong. The World Free Trade Conference was held in Pudong.

2012: Bank of China unveiled its Shanghai trading headquarters to oversee its yuan business, becoming the first of the country’s four major state-owned commercial banks to set up the secondary headquarters in Shanghai.

2016: Shanghai Disney Resort opened. A meeting of the G20 finance ministers and central bank governors was held in Lujiazui.

2017: The C919 completed its first successful trial flight in Pudong. The area set up China’s first authority to cater to overseas talent. Pudong’s new-look 22 kilometers of waterfront opened to the public.

2019: Shanghai Stock Exchange launched the sci-tech innovation board. US manufacturer of electric vehicles Tesla opened a factory in Lingang.