Time to leave home for a breath of fresh air 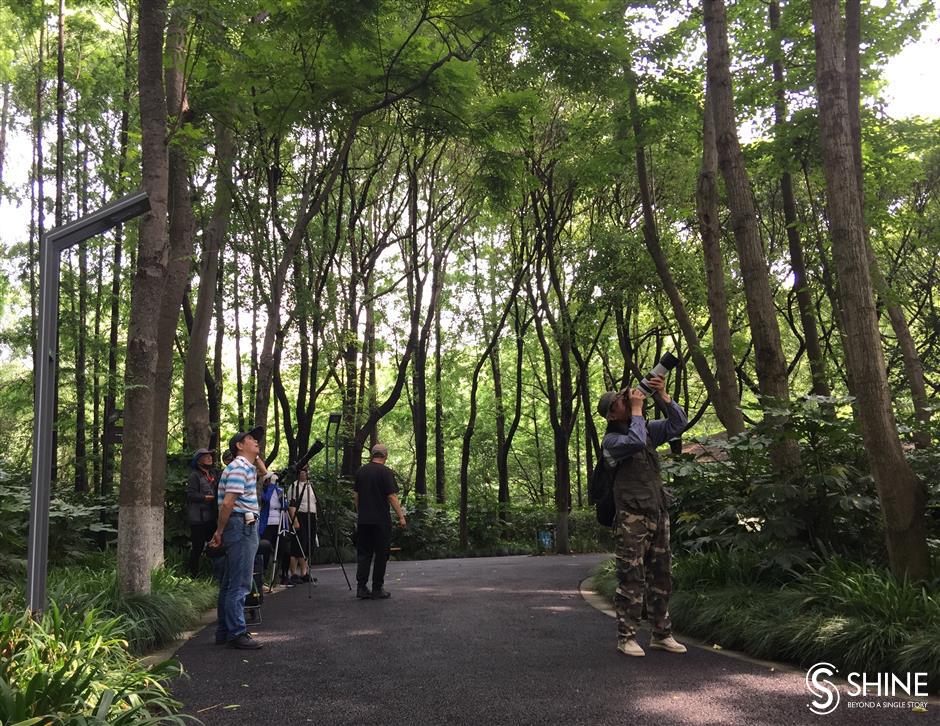 Birdwatchers at Shanghai's Minhang Sports Park where a crested goshawk has built a nest.

After staying at home for so long during the COVID-19 lockdown, most Shanghai residents should find the recent reopening of parks and other fitness areas healing in more senses than one.

During our home stays, virtually all our daily needs could be met with a few clicks on a smartphone and even our health could be managed by an app. But many people still have a natural longing for a breath of fresh air in an open space. If anything, the protracted lockdown has only whetted the appetite for the great outdoors.

Tom Qian, who is in his 40s, visits the recently reopened Minhang Sports Park, just a 10-minute walk from his home, every day. Opened in 2004, it is the city’s first sports park, a concept that combines sports with ecological resources. 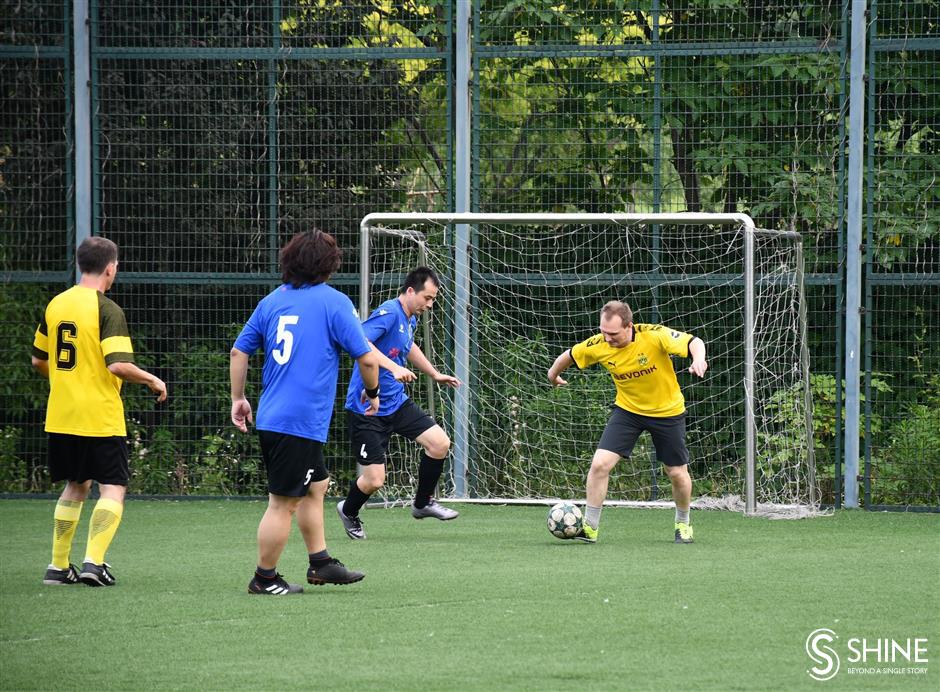 Minhang Sports Park has facilities for many sports, including football.

Shanghai has over 10 such parks, with Zhaoxiang Sports Park in Qingpu District the latest when it opened on a trial basis in March.

The Minhang park, like Zhaoxiang, is on the city’s outskirts. It was built on a landfill site for construction debris.

In addition to towering trees, extensive meadows, lakes and islands, the park has facilities for basketball, cycling, yachting, fishing and the good natural resources make it a perfect place for leisure activities such as birdwatching — one of Qian’s recent obsessions.

The unprecedented lockdown, with parks closed for more than three months, turned many of them into a haven for rare birds and animals. Birdwatchers flocked to the park in Minhang recently to watch a crested goshawk which had built a nest atop an oak tree.

Birdwatchers like Qian can afford to take a more cavalier attitude to their perception of staying fit, while those who have to watch their weight usually resort to more demanding exercises such as jogging or running.

The Huangpu River waterfront has become a favorite destination for residents seeking some exercise.

Jiao Lihua, a 60-year-old Hongkou resident, was effusive about the recently landscaped riverfront walks along the Puxi side of the Huangpu River. Long stretches of riverside rust belts along both sides of the river have been converted into recreational space for residents.

“I usually walk from Gongping Road Ferry Pier in downtown Hongkou to Yangpu Bridge, a distance of more than 4 kilometers, but I never get bored or tired,” she said, citing the gorgeous views. Jiao also thinks it safer to walk along the riverside in the wake of the coronavirus outbreak, for it is easy to avoid crowds in this expanse of open space.

However, she hopes the government will create more outdoor sports and recreational facilities to benefit more residents.

Sources at the Jing’an District Sports Bureau said the district is pushing forward with a “15-minute sports life circle” project launched across the city several years ago. It aims to create fitness space that residents can access within a 15-minute walk from their homes.

Liu Hongfang, 46, who lives in Lingang in the Pudong New Area, runs along nearby Shengang Avenue under a canopy of leaves overhead and beside beds of flowers. Given the limited number of vehicles, lack of access to a park is not a problem.

In 2017, per capita sports space in the city stood at 1.96 square meters. This is estimated to grow to 2.4 square meters this year. 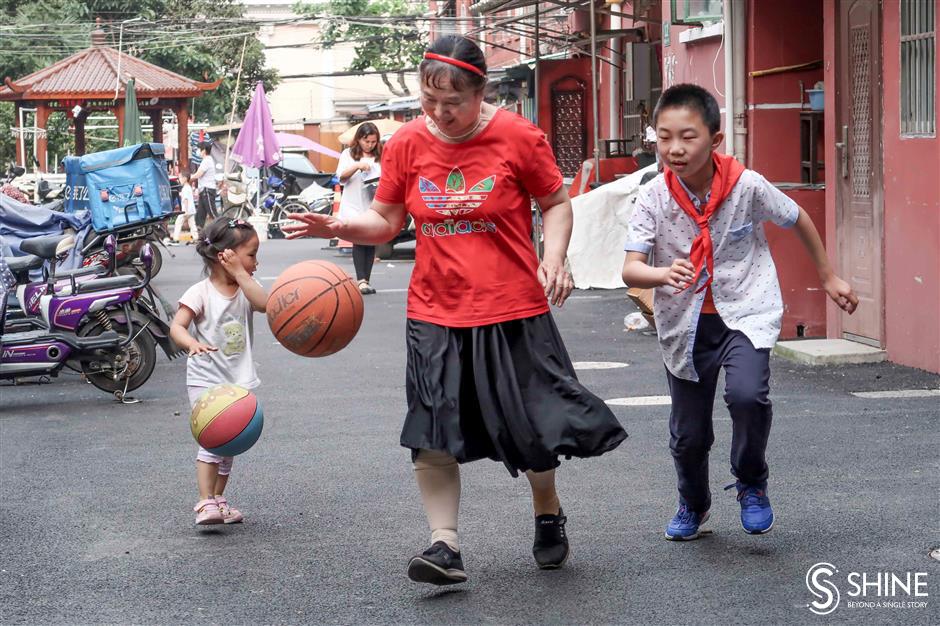 Fun in an urban environment where parks might not be so easily accessible.

Problems remain, though. Some say Shanghai’s sports parks could be made to integrate better with the urban environment, signs could be more instructive and facilities made more accessible, particularly for the elderly. Parks could also be larger and more diversified.

Another six sports parks are being built across the city and there are plans to have more parks open longer. Since May 20, 164 city parks open round the clock. Keeping a sports park open 24 hours can be more complicated. After ongoing renovation, Xujiahui Sports Park will be the first to stay open for 24 hours, a move that could make nearby residents more engaged. 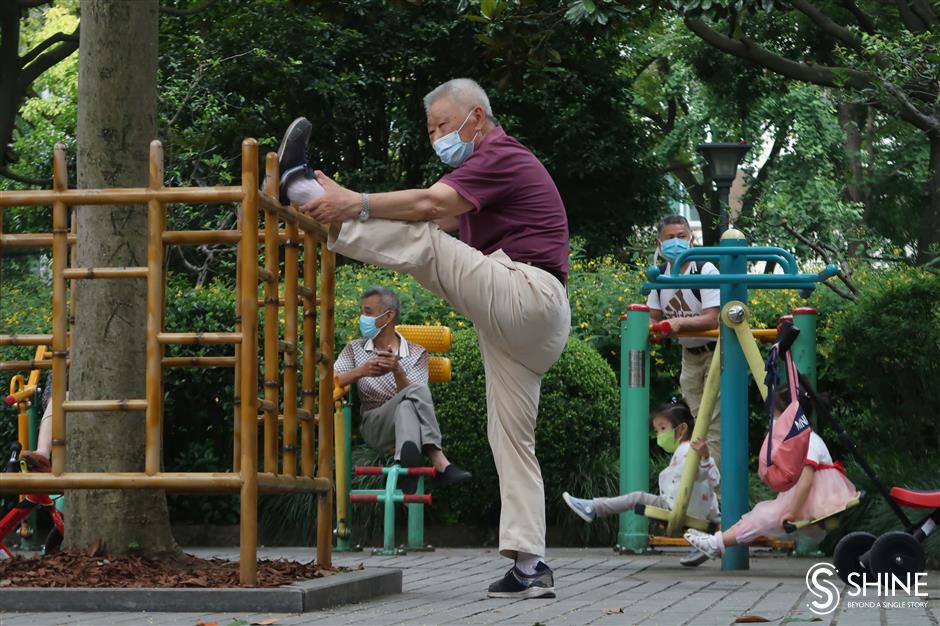 A resident keeps fit in Caoxi Park in Xuhui District on Thursday.

Special Reports
ADVERTISEMENT
Time to leave home for a breath of fresh air
For one survivor, variety is the spice of life
Sino-Italian fashion event focuses on unity, resilience
Quality Life Week is more than consumption stimulus
10th flower expo countdown springs into life
Countdown to 'Blossom with a Chinese Dream'
Vlog: Checking out what's cool and chic on the North Bund
Library branch focuses on vocational skills
Whose surname should a child be given? Aye, there's the rub
Unlocking music appreciation with 88 keys
EXPLORE SHINE