Shanghai’s riverside areas have already been transformed with greenery and walking paths, shikumen residences are being renovated, and the historic North Bund is becoming the city’s “most beautiful parlor.” iDEALShanghai recently checked out the North Bund, a gem with stunning views of the Lujiazui skyline, plenty of thrilling adventures to get up to, and countless photo-worthy moments waiting for you to capture. 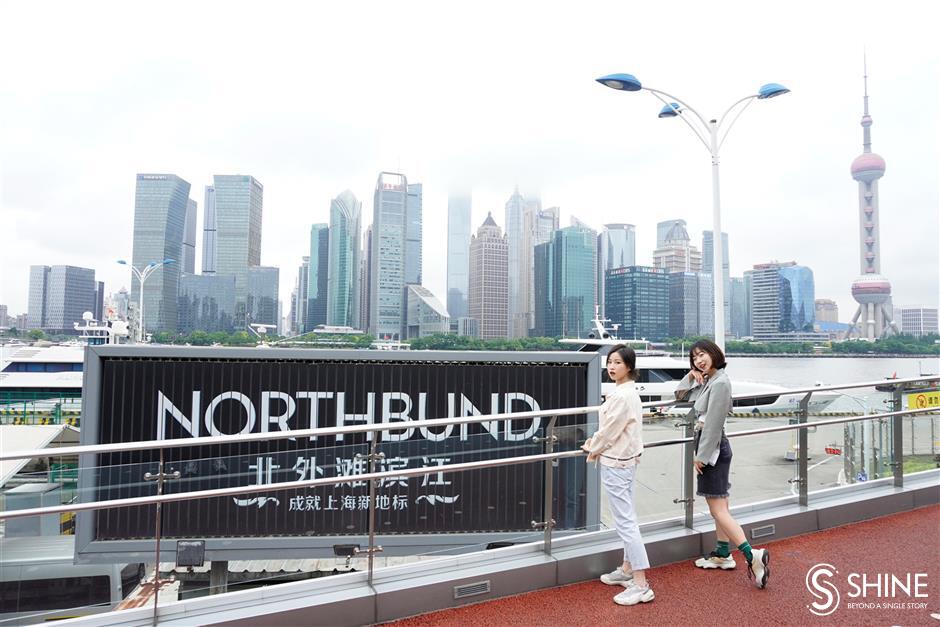 As the world’s first 5G application exhibition and innovation center, the 5G International Innovation Harbor on Yangshupu Road has already become a hot attraction on the North Bund.

The newest applications based on 5G, the next generation of mobile communication technology, are displayed in the center, which was opened last year, along with innovation platforms for global enterprises to join the development.

On the ground floor, there are sections covering 5G network construction, its industry chain, applications and scenarios as well as an experience area with equipment and a cinema.

The highlight is the second floor, where products and scenarios based on 5G are on display, including visual reality games, 5G-controlled cars and a VR classroom for 5G education. Visitors can experience 5G products in the center, and escape into the 5G virtual world through VR glasses. 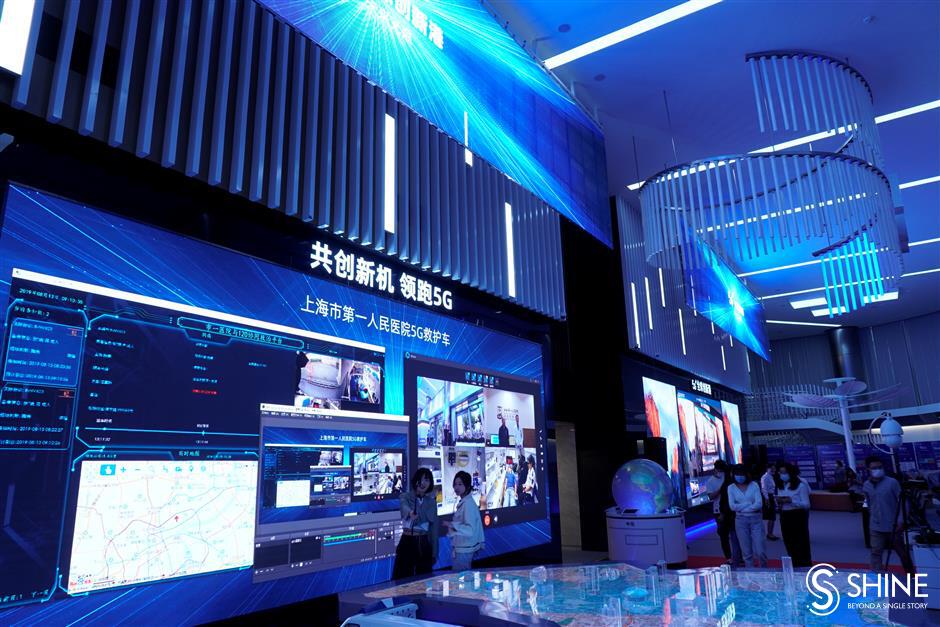 The 5G International Innovation Harbor on Yangshupu Road has become a hot attraction.

iDEALShanghai tried out a VR shooter game and a VR classroom. Compared to normal VR games, the higher through-put of 5G for VR content that’s streamed from the cloud provides users with the same flexibility they’ve come to expect from video streaming platforms.

With 5G, the VR classroom adds new types of content, from augmented reality to virtual reality. For example, users can click to see capillaries through the VR glasses in a biology class.

The center also exhibits the surrounding 5G applications at the North Bund area which have been fully covered with 5G signals. The Beiwaitan Subdistrict has applied 5G to government affairs, traffic and public security. The center is not open to individuals, but corporate visits are available by reservation. 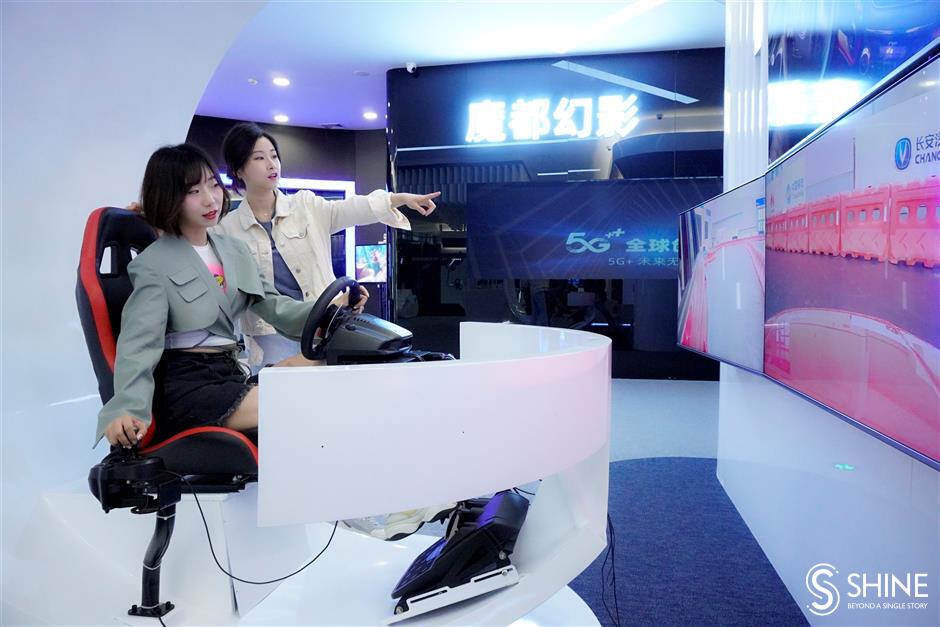 iDEALShanghai reporters try out a VR shooter game on the second floor of the center.

Located at the North Bund area, Baopu Art Museum has gone viral on social media platforms for its breathtaking view of the Huangpu River and the skyline of Lujiazui.

The name Baopu comes from a phrase from ancient Chinese philosopher Laozi, who touts the key virtues of “simplicity and humility.”

The collections of the art museum mainly focus on culture heritage, including Jun chinaware and Suzhou embroidery.

“The Jun kiln is among the most famous folk kilns of the Song Dynasty (960-1279) in China, as objects enter the kiln with only one color, but come out with different colors. All the patterns on the Jun ware are formed naturally in the kiln. It has a high position in Chinese history,” said He Hailong, curator of Baopu Art Museum.

Besides the masterpieces, a spiral stairway inside the art museum is another highlight, attracting lots of photographers. A corridor inside the popular Baopu Art Museum

If you want to take a fancy tour along the North Bund, renting a yacht is a great choice. The yacht club here provides different kinds of yachts. Their renting prices range from 3,000 yuan (US$421) to 10,000 yuan per hour.

There are two typical routes, one is the center part of the Huangpu River — about one hour — which provides a unique perspective on the historical architecture on the west side of the river, in contrast with the modern high-rise apartments of the east side.

The other is an Exporoute — about two hours — from the North Bund to the Expo park along the West Bund.

Before your trip, it should be noted that each yacht has a maximum of 10 people required by law. 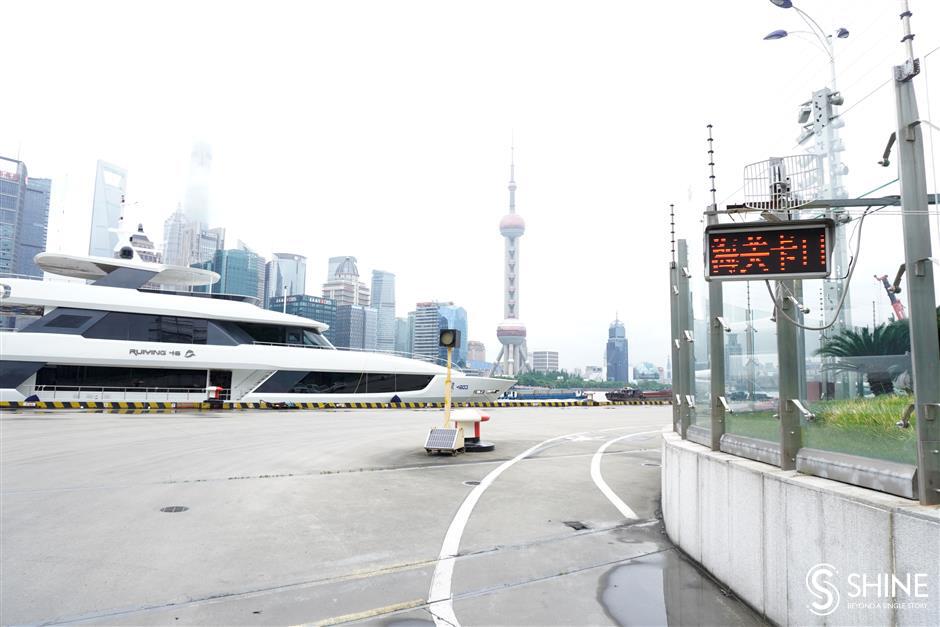 The yacht club at the North Bund offers visitors a chance to take a fancy tour along the river.

As a landmark of the North Bund, the bridge got its name from its rainbow-color lights.

At the top of the bridge, you can get a clear view of the river without obstructions.

Lots of Chinese roses are planted on the bridge, making it a greenery sky-garden. Now it’s blooming season, showing a great summer view. 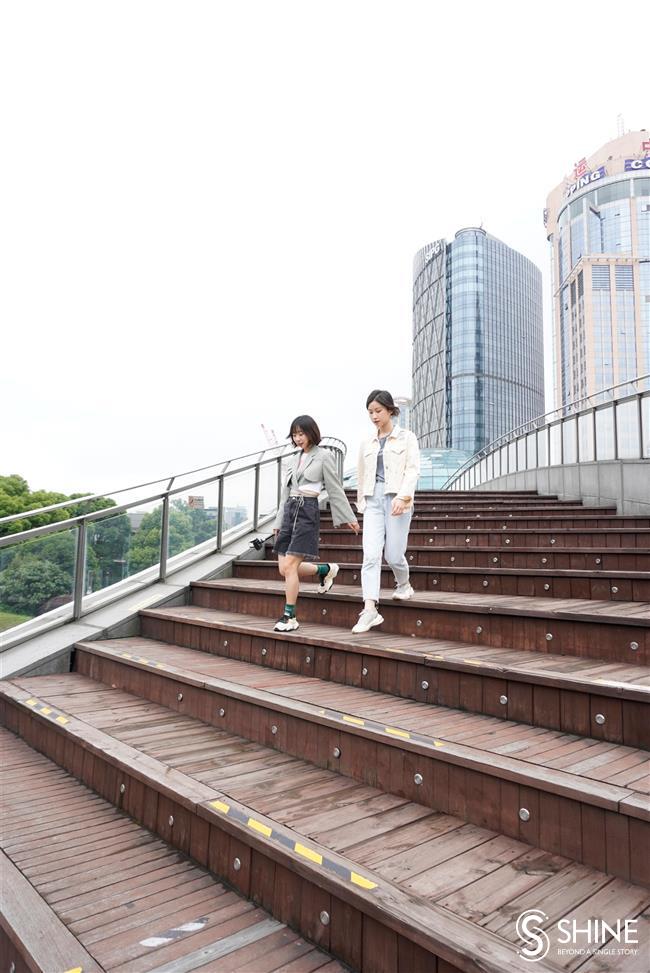 Fiona Li and Shirlene Gu walk down the Rainbow Bridge.

Get a special angle of the North Bund at Magic Jungle

If you want to add a little bit of fun and challenge to your journey on the North Bund, the Magic Jungle will be a perfect choice.

The German-designed project features 94 play areas for both children and adults. They include a six-story giant swing, a crazy slide and a low bungee jump, which allows visitors to challenge themselves and enjoy a great view over the waterfront at the same time. 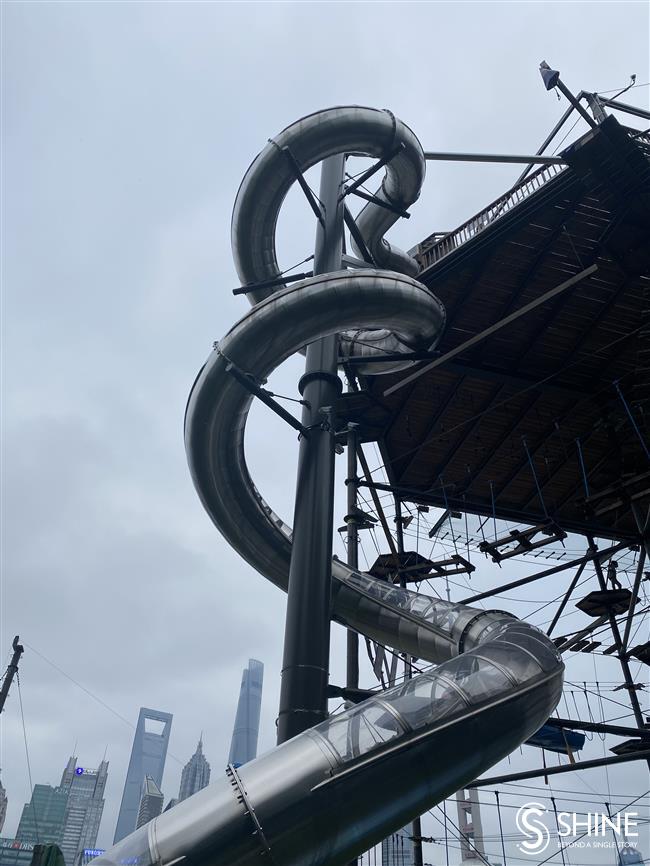 The Magic Jungle can add a bit of fun and challenge to your journey on the North Bund. 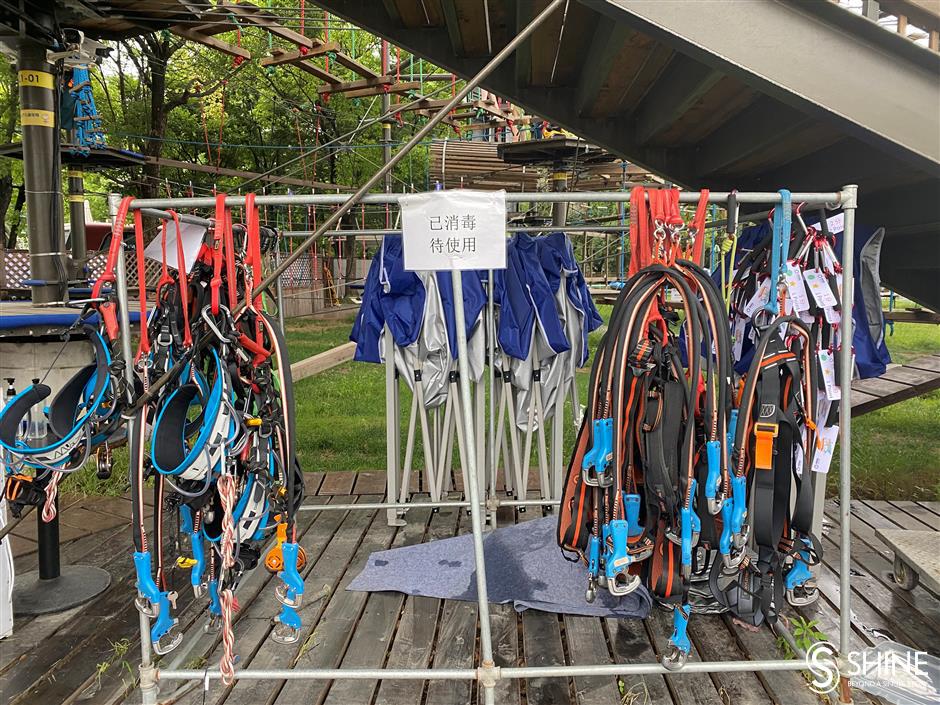 Protection gears and suits provided at the Magic Jungle

It has been transformed into an open-air museum, the one and only here in Shanghai, known as the Shanghai Docks Heritage Museum.

There is a famous bench for tourist’s snap, with a Qing Dynasty boy statue sitting on it and an Albert Einstein statue standing beside it. 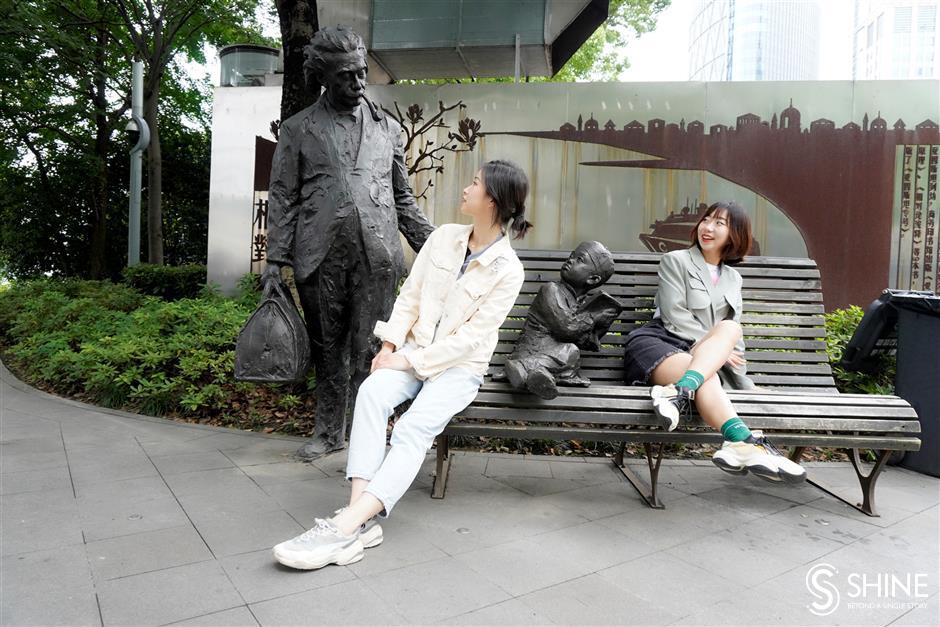 Fiona Li and Shirlene Gu sit on the famous bench.

The best place to take photos of the North Bund

Four mirrors in different colors are installed on the handrails of the viewing platform of SIPG, you can get a symmetrical photo of the skyline of Lujiazui by the mirrors if you place the phone at the right angle.

At the Zhiyang viewing platform, the White Magnolia Plaza and the Oriental Pearl TV Tower can be placed in one photo.

The site of the viewing platform of Shanghai Port International Cruise Terminal offers the best view of the Lujiazui financial zone across the river.

The sky lobby on the 36th floor of Sinar Mas Plaza, the tallest building in Puxi, provides a panoramic view of the whole city, but it is not open to the public except event days. 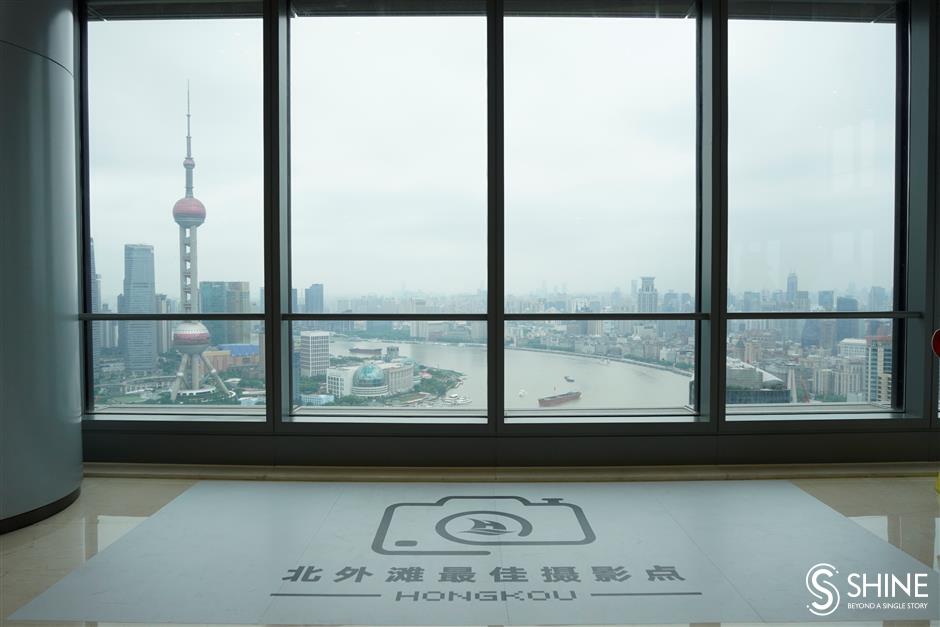