When the chirping stops, a market croaks

Shanghai’s bird and flower markets are withering away.

Just half a year ago, we bade farewell to the Qinqing flower market in Xuhui District. Now, another popular venue called Wanshang in Huangpu District will be shuttered at the end of this month.

Such markets are fast becoming memories in Shanghai as authorities cite fire risk and other public health and safety factors for their closures.

A countdown notice on the wall reminds vendors and consumers that the Wanshang market will close from next month after operating for more than 20 years in the city.

Started more than 20 years ago, Wanshang is probably the most bustling of the once prolific flower and bird markets in Shanghai. Located on Xizang Road S., the market was perhaps most famous for “exotic” pets, like Chinese crickets, cicadas and grasshoppers. Its air is filled with the cacophony of chirping insects.

Singing insects and fighting crickets have deep cultural roots in China. The originally aristocratic hobby can be traced back to the Tang Dynasty (AD 618-907). Though not as popular as it once was, the custom still enjoys considerable popularity among those nostalgic about the past. 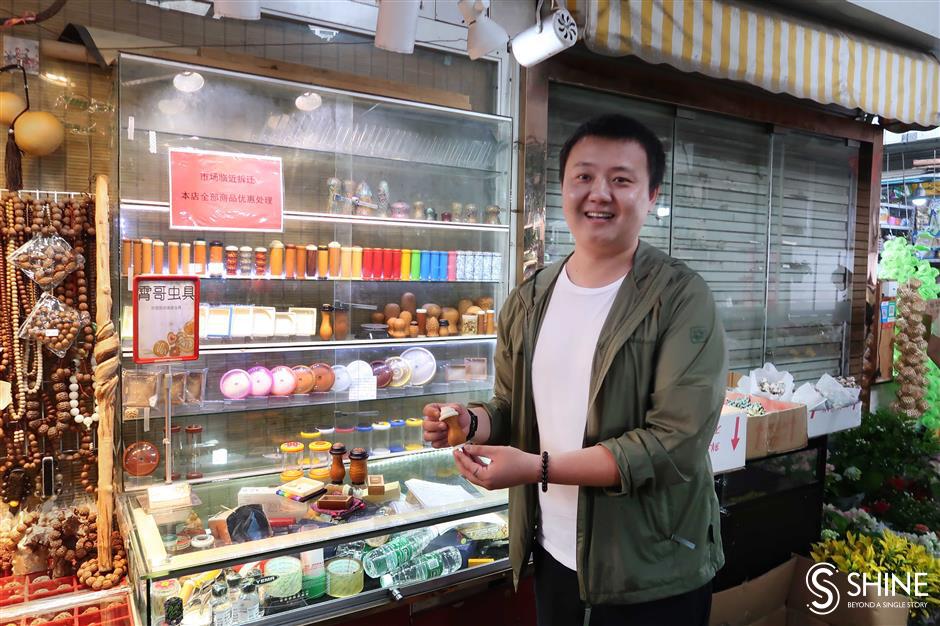 Bai Zixiao, 30, is the youngest insect-gear retailer in the market.

“I once encountered an old man who had hearing loss but still came here to buy singing insects. He was endowed with memories of the past.”

Born in 1990, Bai is the youngest insect-gear retailer in the market. Influenced by his father, a Shanghai zhiqing, or young intellectual, who was sent to aid the development of Heilongjiang Province, Bai has had a passion for insects since his childhood.

Although Bai didn’t operate his stall in Wanshang market until 2018, his connection with the market goes back much further. He recalls childhood visits to Wanshang market with his father every summer just to buy a singing insect. At the time, the family lived in the Heilongjiang city of Daqing. He often took insects to his school to show his classmates.

“I thought it was very cool,” says Bai. “However, the hobby made it difficult for me to make girlfriends.”

Taking out two boxes from his backpack, Bai shows me two singing insects — a huangling, or yellow cricket, and a zhuling, or tree cricket. One of them is placed in a round, acrylic container called a wanti because of its similarity to Shanghai Stadium, which is called wanti guan for short in Chinese. Another insect lives in a little house made of bamboo.

The costly insect containers are displayed in an ordinary glass cabinet, which is the sum total of Bai’s stall on the side of an aisle.

“I think it is closer to visitors,” says Bai. “People can inquire about the works more freely.”

Bai graduated with a bachelor’s degree in business administration from an Australian university. Most of his friends who went on to start their own companies are puzzled by Bai’s choice of work.

“In 2016, I had an accident while riding my motorcycle,” says Bai. “Two bones in my thoracic vertebra fractured. During a one-year recovery, singing insects kept me company and cheered me up.”

Indeed, many enthusiasts of singing insects can’t live without them. They are lulled to sleep by the melody of their chirping. They talk to them and even give them decent burials.

For serious insect lovers, it’s often not easy to find the one that captivates them most.

Holding a flashlight, a middle-aged man at the market carefully peruses groups of guoguo, or long-horn grasshoppers, which are enclosed in green plastic cages. He inclines his ear to them to listen carefully. He wanders from one stall to another for an hour, persistently looking for the one insect that catches his fancy.

“Some customers spend a whole day in the market in order to find a satisfactory insect as a pet,” says Zheng Haixian, 36, an insect-stall owner. “The use of flashlights and magnifying glasses helps buyers to examine the insects’ limbs.” 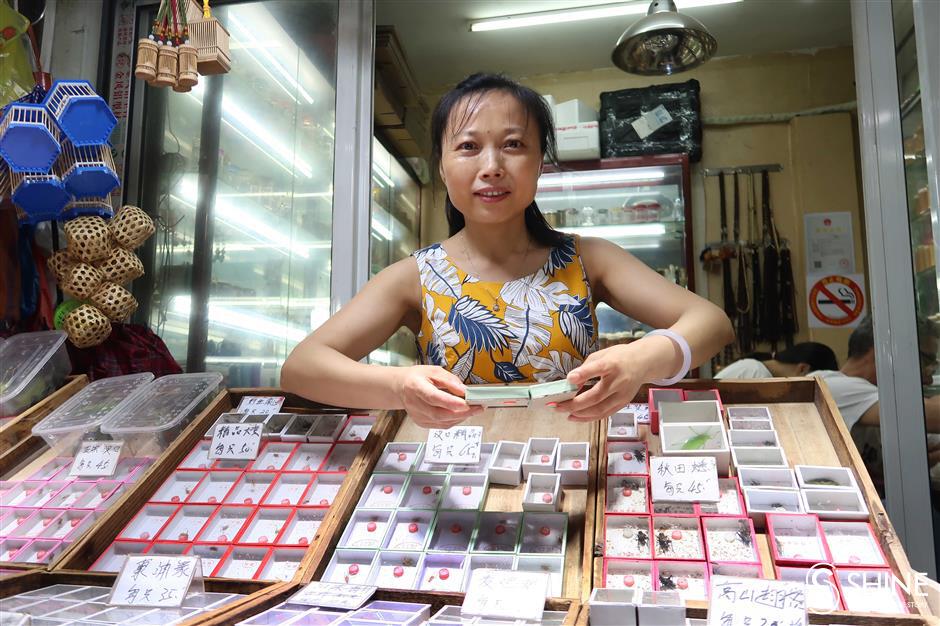 Zheng is a native of Huangshan in Anhui Province, home to the huangling. She has known the insect since her childhood. During summer vacations, she and other children helped traders catch huangling in the woods as a way to earn pin money.

In 2007, Zheng herself became a trader of singing insects. She set up a temporary stall at Wanshang market in the autumn, when the insects hit their peak. In 2009, she had her own store at the market and settled down in the city.

More than 20 kinds of singing insects are available at Zheng’s store, along with pet insect paraphernalia.

“Ordinary insects live in ‘apartments’ while the rare ones live in ‘villas,’” says Zheng. “The price of the insects ranges from 5 yuan to thousands of yuan.”

An “apartment” is a paper box or plastic cage. “Villas” are containers made of bamboo. According to Zheng, the exquisite containers create better sound effects.

Zheng has operated her insect stall from 9am to 5pm every day, except during Spring Festival.

“I need to feed insects every day,” says Zheng. “They are living souls like human beings. For the huangling, I cook millet congee and prepare apples to feed them twice a day. Guoguo eat edamame (immature soybeans), which must be fresh and plump.”

During our conversation, a guoguo escapes from its cage. Zheng grabs hold of the fugitive immediately.

“I spent my golden days in this market,” she says. “Its closure makes me very sad.”

However, Zheng has found a new home for the insects. She gives me a newly printed business card that says she is moving to a flower and bird market called Lanling in Putuo District.

Many other stallholders in the market are going there, too, including vendors selling accessories like walnut shell bracelets and amber necklaces. 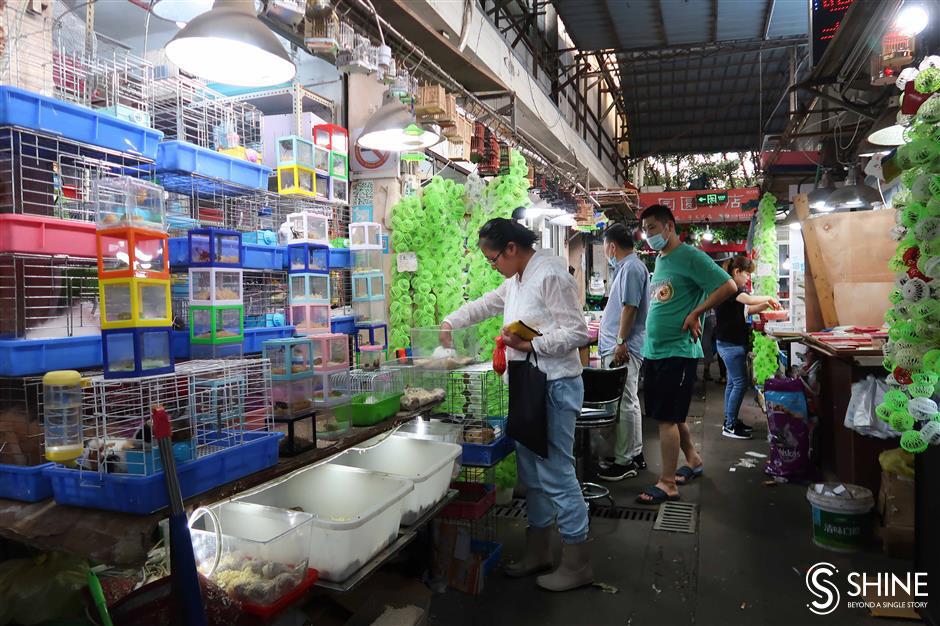 Wanshang used to be a paradise for lovers of pets, especially “exotic” ones such as crickets and grasshoppers.

Fu Zhulin, 35, has been operating an accessory shop in the market since 2014. However, her first visit to the market was as early as in 2006.

“My husband, who likes keeping insects, brought me to the market,” says Fu. “It was crowded with people. The hustle and bustle felt like a glimpse of Old Shanghai.”

Rubbing rudraksha beads ceaselessly, Fu says the years in the market were valuable in taming her temper.

“The walnut shells and rudraksha beads are living things,” says Fu. “They can change by rubbing and touching them for a certain time. While I am rubbing them, I ignore everything else and calm myself down.”

Thriving in 2015 and 2016, Fu was so busy that she often skipped meals, which resulted in the stomach trouble. The illness taught her a valuable lesson: Health is more important than wealth.

Since then, she cites the greatest “wealth” as the friendship of customers and other vendors. Knowing the market is closing soon, many customers have come to express their solidarity with her loss.

“City life is stressful and fast-paced,” says Fu. “Flower and bird markets are oases of calm, especially for elderly people.”

While young people can socialize in shopping malls, elderly people prefer going to traditional markets not too far from their homes. The crush of urbanization seems to be choking off their little joys of life.

According to Fu, insect retailers from across the country had set up temporary stalls in Wanshang, attracting crowds of people, including foreign visitors who were fascinated by bugs kept as pets. Some curious foreigners even bought tickets for cricket fighting competitions or bamboo cages as souvenirs.

The lively scene of the market was subdued during the coronavirus outbreak. Soon even that will be snuffed out.

“I will miss the market,” says Bai. “In flower and bird markets, you can capture the beauty of the seasons. You can even tell the month just by seeing what plants are blooming.” 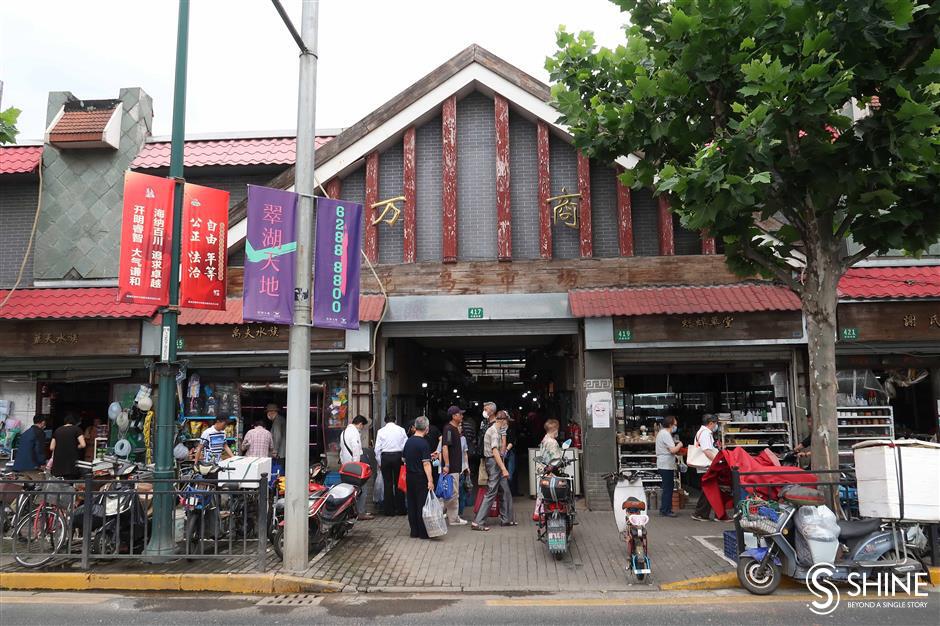 The Wanshang market is located on Xizang Road S. in Huangpu District.