Meme's the word: How Eggman struck a chord

Chinese-language pop music has never been as trendy in the West as, say, K-pop from South Korea. But that changed a bit in the past month, when a 1980s Taiwan song went viral on the worldwide net.

It wasn’t so much a catchy tune or irresistible lyrics that catapulted the song to brief online fame. Rather, it was because of a Chinese man who has come to be known as Eggman.

The song, “Yi Jian Mei,” or “One Plum Blossom,” was performed by Taiwan singer Fei Yu-Ching and is known to almost everyone in China. It is the theme song of a 1980s TV drama series of the same title. The song describes how plum blossoms bloom in the cold — a symbol of people overcoming adversity.

The song itself made it to top 10 on the Viral Chart of music streaming application Spotify in several countries, such as Norway, Sweden and New Zealand.

It all started with a user on Chinese TikTok — which operates separately from the international version — who uploaded a short footage of himself in the snow, singing the two lines of the song.

Viewers of the video were obviously more interested in the bald head of the singer wearing a bright yellow coat than they were in the lyrics. His head, to them, resembled an egg. In fact, the man’s TikTok ID is “Dan Ge,” which means “egg man” in Chinese.

People commented on the 12-second video: “What happened to your head?” or “Could you tell me what filter did you use to create such a hilarious head effect?”

The Eggman’s real name is Zhang Aiqin, 41, a native of east China’s Shandong Province. He is a bit-part actor who appeared mostly in monster or other costumes that hid his identity. 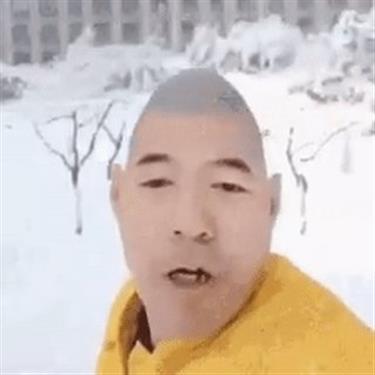 Zhang loaded the footage of his singing the song several months before it became a sensation and had almost forgotten about it.

“I was livestreaming one day,” he said, “and someone in a comment said: ‘Dan Ge, sing xue hua piao piao.’ I was puzzled. Why would I want to sing about snow in the summer? And then the commenter said: ‘You’re famous overseas now.’ And I was even more puzzled.”

In fact, a user with the ID Buhjinator uploaded the video on YouTube back in February, entitling it “Chinese man in da snow.” The video attracted more than 312,000 clicks and was later reposted on Instagram. The two lines of lyrics had a misspelling: “xie hua piao piao.”

Western netizens finally got to know the correct pinyin spelling of the lyrics and their meaning after several Quora questions and a mention in the Urban Dictionary. As an aside, the Urban Dictionary refers to Zhang as the Chinese version of Humpty Dumpty in the animation movie “Shrek.”

“My mom really asked why I have 30 missing assignments.”

Meanwhile, an online event started among overseas-born Chinese, who challenged their parents to read out the lines aloud — betting that most of them would actually sing them rather than read them. And the result? About eight out of 10 Chinese parents did sing when they saw the lines.

Meanwhile, Chinese netizens were more than surprised to see the song going viral outside its targeted audience. On NetEase Music, a Spotify-like music streaming application in China, people expressed puzzlement.

“I feel complicated about it,” posted one netizen. “On the one hand, I’m happy that a Chinese-language song could become so popular; on the other hand, it seems that most people don’t really understand its true meaning but are just making fun of it.”

Other users, however, had different opinions.

“Even if there is only one person who is truly interested in the song itself rather than the meme, then it is a successful cultural exchange,” commented another user.

All the hilarity on the other side of the world engendered by his short video hasn’t really changed Eggman’s life in China, with the exception that he has more followers.

“It’s a good thing because it means I’m likely to get more work,” he said. “After all, I have a family to feed. At least people now know that I’m an actor.”

Zhang said he is not happy when people use his face in their online avatars.

“I fear that they might do bad things in my name — fraud or something,” he said.

Zhang said he is long used to people making fun of his ovoid-shaped head, dating back to primary school.

Before becoming an actor, he worked in an orchard and then in a nightclub. A customer at the nightclub, who was a movie director, told him that his head was “iconic.”

“He told me to become an actor,” Zhang said. “So I went to Beijing to seek auditions.”

The online meme will soon disappear as all pop trends do, leaving Zhang to get on with his life. This year, he said, he will direct a web series with himself in the leading role.

Special Reports
ADVERTISEMENT
Keeping cool as it gets hot under the collar
Animal adoption information as of August 11
American cosmetics brand offers free skin test
A taste of South Korea in Shanghai's Koreatown
Vlog: Talking with the gamers at ChinaJoy 2020
Expats find a sense of community in city
Hei Bulin the Dog
Cherry the Cat
Western designs with a bold Oriental touch
A passionate pursuit of creating timeless design
EXPLORE SHINE