Master chef cooks up a taste for classics 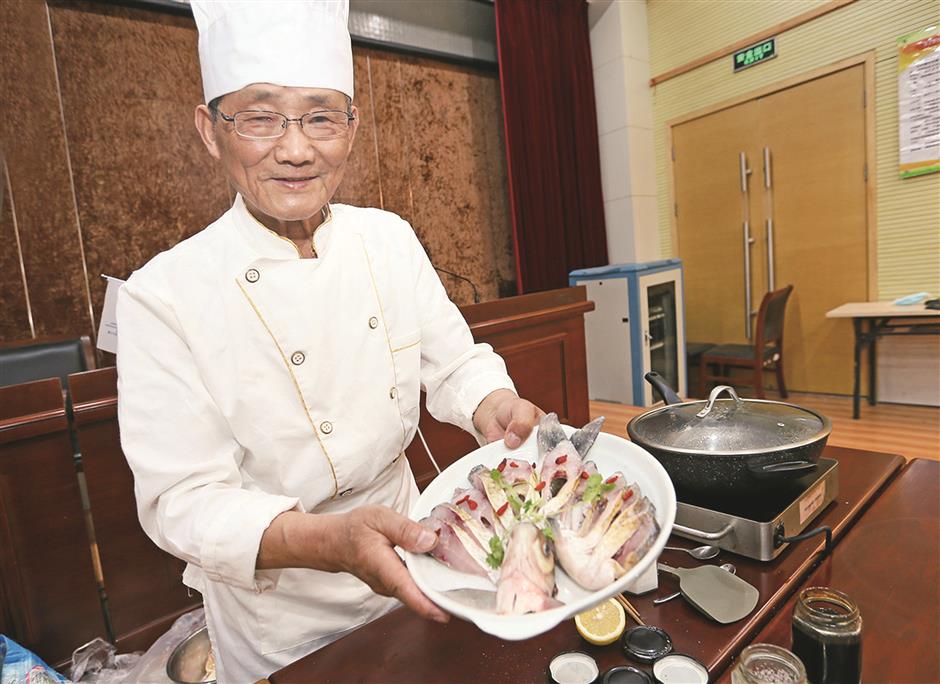 Zhang Yongquan, a retired chef who teaches at Sijing Community School in Songjiang, demonstrates to his students how to make the lemon juice sprinkled perch fish in peacock tail shape. Zhang’s class is a big hit with local residents. People would queue at 6am in front of the school to sigh up for his classes. 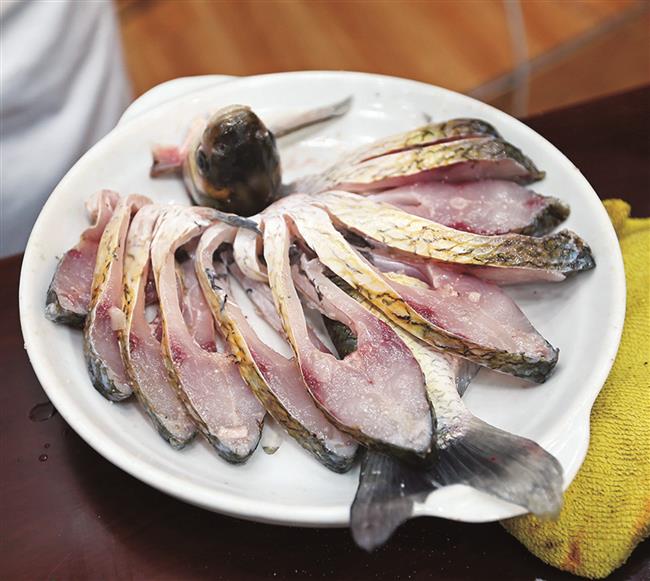 In the catering industry in China professional chefs are divided into bai‘an and hong’an, or pastry and dish, chefs.

Zhang Yongquan, a retired chef in his 70s who teaches at Sijing Community School in Songjiang District, is a master of both bai’an and hong’an cuisines.

“I was the oldest child in a poor family and I quit school to support the family when I was in junior high. I was recommended to work as an apprentice at a food store affiliated to Songjiang Commercial Corporation at the age of 15. Zhang Fengxiang, the second-generation inheritor of Ah Liu tangyuan (glutinous rice balls with sweet or salty fillings), one of Sijing’s classic dim sum, was my bai‘an teacher,” Zhang recalled.

Though compelled to enter the industry at an early age, Zhang was nevertheless fascinated by the superlative craftsmanship of the trade’s devotees. He was amazed when seeing flour and pork meat, after being chopped, rubbed and boiled, were made into juicy and fragrant tangyuan. So he learned the trade meticulously.

The following year he was awarded with honors including “Youth Vanguard Worker,” “Model Youth” and “Proficient Worker.” And two years later he was ready to be in charge at the store as its manager.

“My father-in-law was a renowned hong’an chef in Songjiang. He helped people with their funeral or wedding banquets. So I started to learn hong’an dishes from him after I was proficient with the bai’an courses,” said Zhang.

His years working in the catering industry lasted until he retired in January, 2006.

“In the second half of 2005 Sijing Community School invited me to be its catering teacher and promote the town’s traditional food culture among its residents. I agreed. And since my first cooking class in autumn that year, I have now worked there for 15 years,” said Zhang.

Zhang’s class is a big hit with local residents. People would queue at 6am in front of the community school in order to sign up for his classes.

In each lesson Zhang teaches his students recipes of a dish and a snack. All the recipes are adapted from restaurant recipes.

“My target is to teach people easy-to-make home dishes, so those restaurant recipes will undergo changes. And the dishes should be what my students would like to and feel convenient to cook, and healthy,” said Zhang.

There are around 50 or 60 people in each class and sometimes even more students would come to sit in.

“I am busy with delivering courses or attending community activities to judge various cooking competitions. It is a precious opportunity to reengage with society after my retirement. My teaching benefits my students as well as myself. My students respect and like me, and I feel I ought to spend my time with them,” said Zhang.

“The pale fire of one’s life will perish if it stands alone. It develops into a roaring fire only through being in society,” Zhang added.

The recipes Zhang has shared with his students are well-considered.

“Take the braised pig knuckle in brown sauce for example. It’s a traditional dish in Sijing. But people would complain of oil splashing or the lean meat turning too tough when cooking. So I told them to use a smaller utensil with a higher height and place the fat meat into the boiling oil while leaving the lean meat uncovered by the oil. So the oil won’t splash and the lean meat won’t be too tough,” Zhang said.

After each class Zhang distributes the food he has made to the students, and seeing them enjoying the food and discussing the recipe is when Zhang feels happiest.

Why doesn’t he open his own restaurant with those secret classic recipes?

“These are classic recipes inherited from Sijing’s ancient-time catering masters. It would be selfish for me to hide them from others. So as long as people would like to know about them, I will share the recipes with them unreservedly,” said Zhang.

In addition to his lessons, Zhang has compiled recipe books including “50 Cases of Sijing’s Healthy Recipes,” “10 Sijing Dishes and 10 Sijing Snacks” and “Catering Class for Elementary School Students.”

“The town has many traditional dishes and snacks, such as Ah Liu tangyuan, lard oil sesame cake, fried cake with meat fillings and Hongxi glutinous rice pancake. But many of them are on the verge of being lost forever due to a lack of inheritors. I will keep on promoting the food culture for the rest of my life and I hope more young people will like to learn it,” said Zhang.