A taste of South Korea in Shanghai's Koreatown

If you want to experience authentic South Korean culture, there is only one place in the city to go — Koreatown in Minhang District. With its large number of South Korean residents, even the storefront signage and government bulletins are posted in Hangul, the Korean alphabet.

Hongquan Road (better known as Korean Street) in the center of Koreatown became a hot attraction in 2013 with the popularity of Korean TV dramas “Heirs” and “My Love From The Star.”

This year, an outdoor Seoul Market with all kinds of Korean-style roadside stands has made the street a hot destination for a second time.

There are plenty of BBQ places and Korean products in the shops for you to dine in or take home, colorful coffee shops to post pictures on social media, and many interesting places worth checking out.

Fiona Li and Shirlene Gu invited their friend, Coco Zhang, who is crazy about Korean culture, to accompany them as they explored the most authentic shops in Shanghai’s Koreatown. 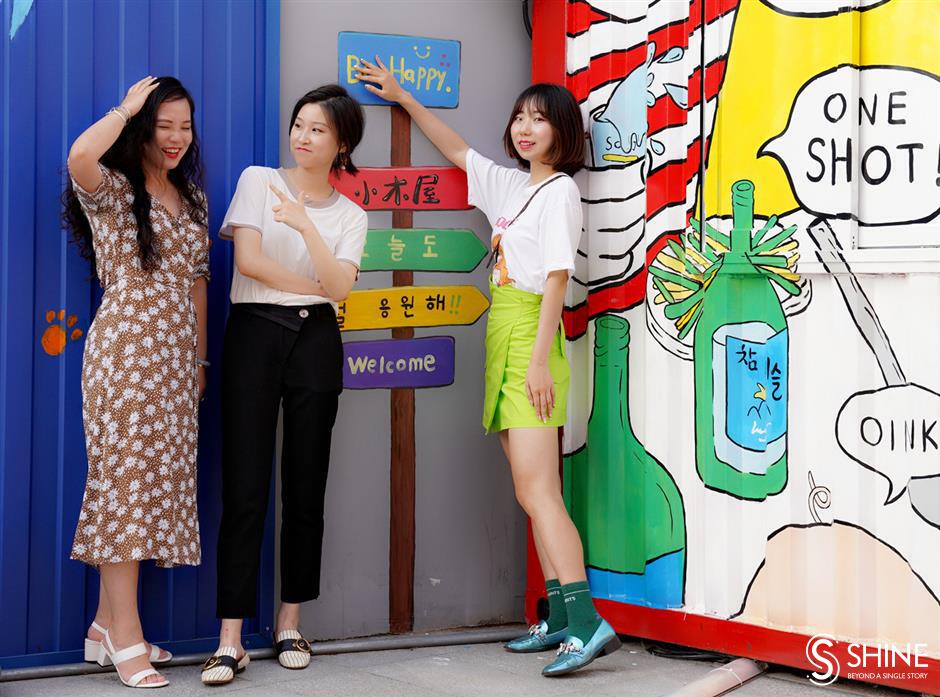 Street snacks at the tteokbokki eatery

Large pans full of spicy, bright red sauce containing finger-sized rice cakes and sliced-up fish cakes, the tteokbokki eatery here is as same as those at the roadside in the South Korean city of Busan.

Busan Fishcake, a food shop at Jingting Plaza for years, has opened a new outlet on Hongquan Road. It serves traditional tteokbokki and Busan fishcakes (also called eomuk). The fishcakes are concertinaed onto skewers and cooked in fishcake soup (eomuk-guk). When you eat the fishcakes, don’t forget to ask for a cup of the warm broth.

Their seaweed rice rolls (kimbap) are also worth a look. They fill them with crab, tuna, pork, bulgogi and even cheese. 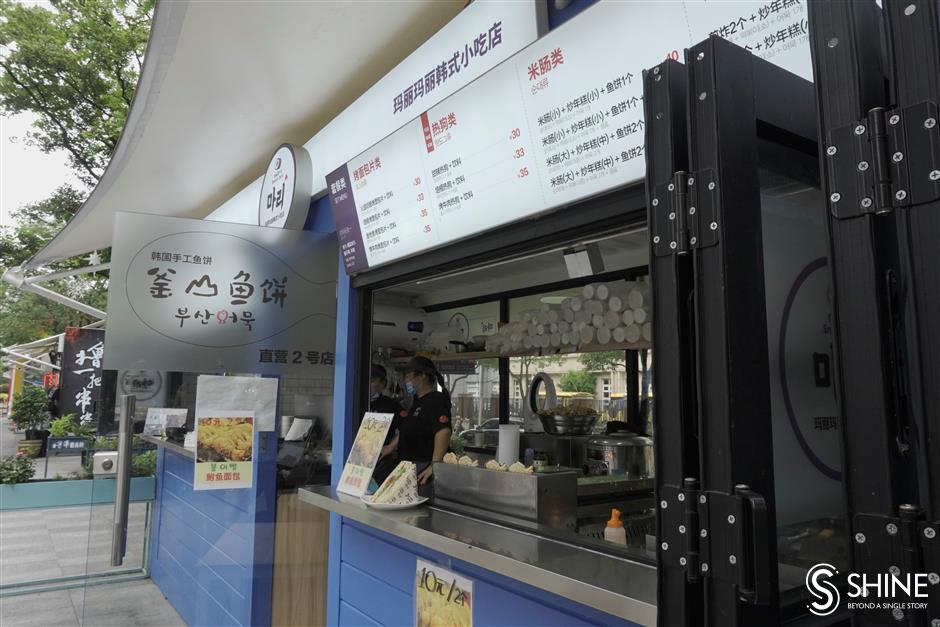 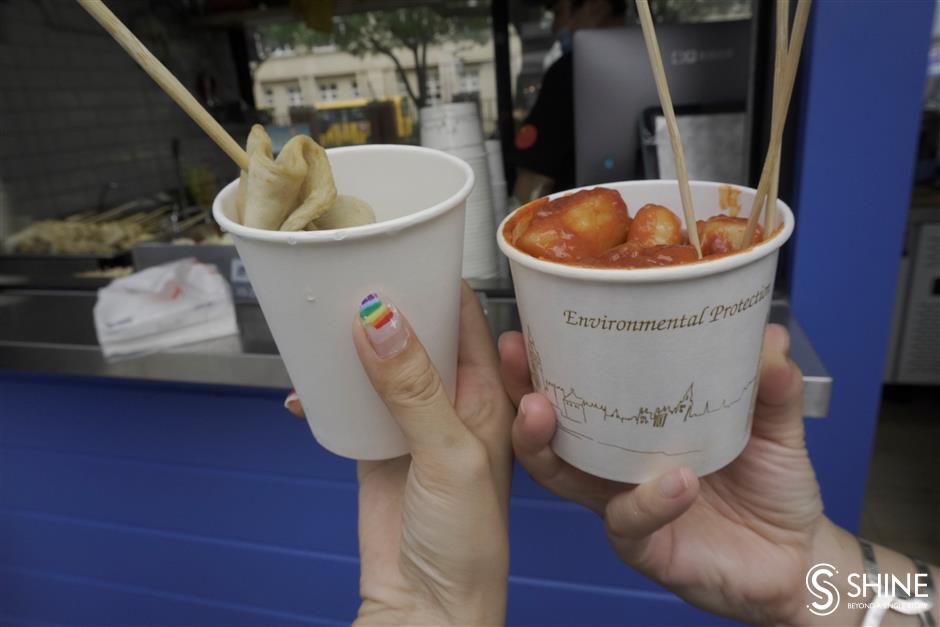 Should you need to stock up on provisions, there is an alphabet soup of Korean supermarkets here. Kmart, GMart and W Mart have got you covered for most of your import needs. Instant noodles are an art form in South Korea, and you’ll find aisles and aisles of them in these shops.

As a highlight, there is a special edition of Ram-Don (aka Jjapaguri) which featured in the Oscar-winning film “Parasite.” The food is a combination of two instant Korean noodles Chapagetti (stir fry) and Neoguri (udon noodles).

“On my list,” Coco told us, “the most recommended is a blue-tone bottle Jinro soju, named ‘Jinro Is Back,’ which is a reinterpretation of soju sold between 1975 and 1983. It used to be sold just inside South Korea, and I’ve found it at Kmart.” 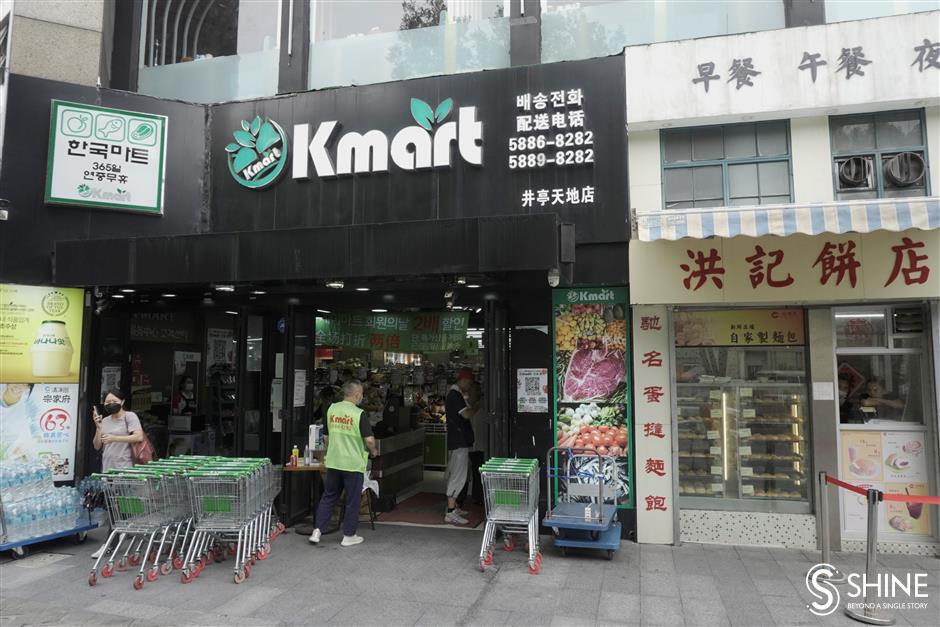 The entrance of the Kmart 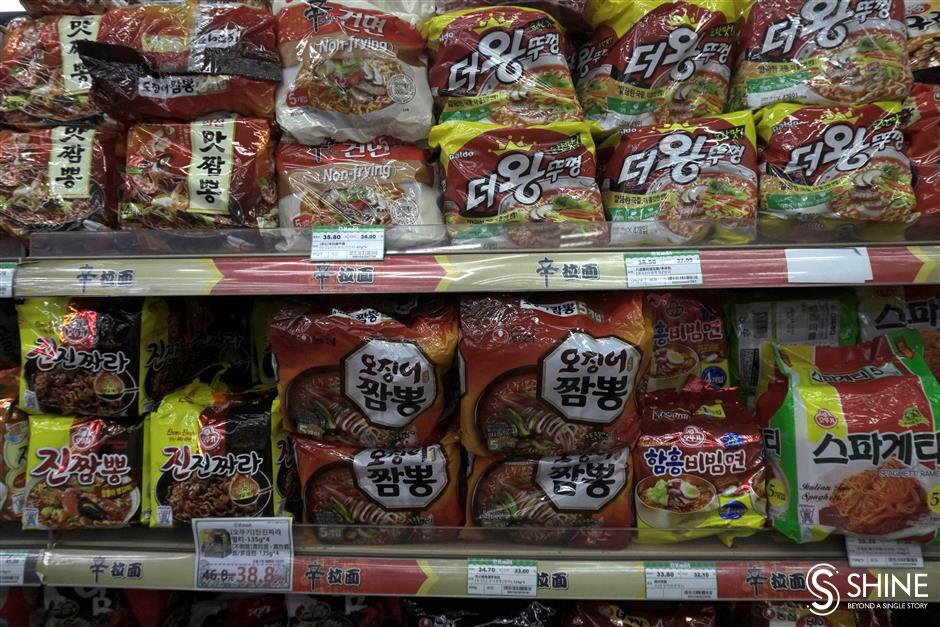 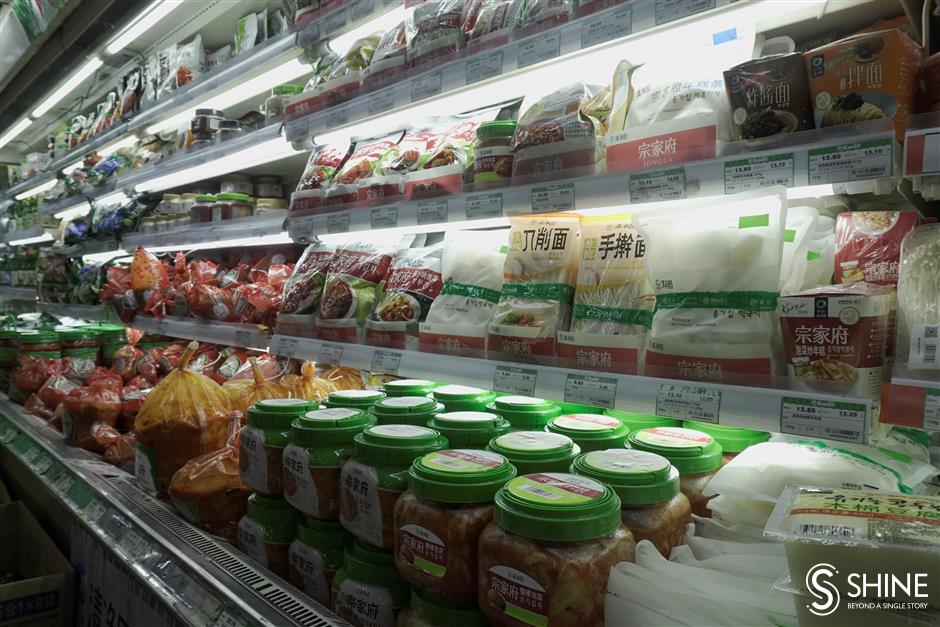 Korean-style coffee shops are always a great place to take photos. Famous for their designs and bright colors, there are three popular ones on the street.

At More Coffee, a store with a large yellow wall, the signature drink is a three-color coffee — espresso on the top, milk in the middle, with blue or pink syrup at the bottom, and with a lemon or strawberry flavor.

Alpha Coffee is famous for its green cups and fluorescent shop sign. The vending machine (although not in use) attracts a flood of customers taking photos. They provide coffees and soda drinks at attractive prices. An Americano costs 12 yuan (US$1.7) and 18 yuan for a blue lemon soda.

Gyedanjip (literally staircase) Coffee, provides many options of colorful drinks, such as three-berry smoothies in red, grapefruit tea in yellow and sweet potato latte in purple (a little weird). To be honest, it looks better than it tastes. 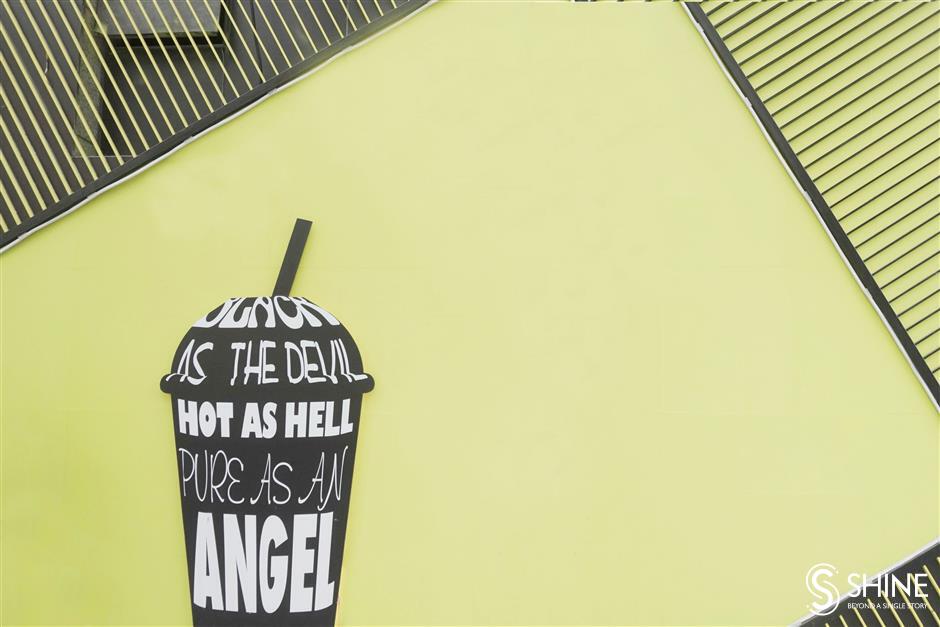 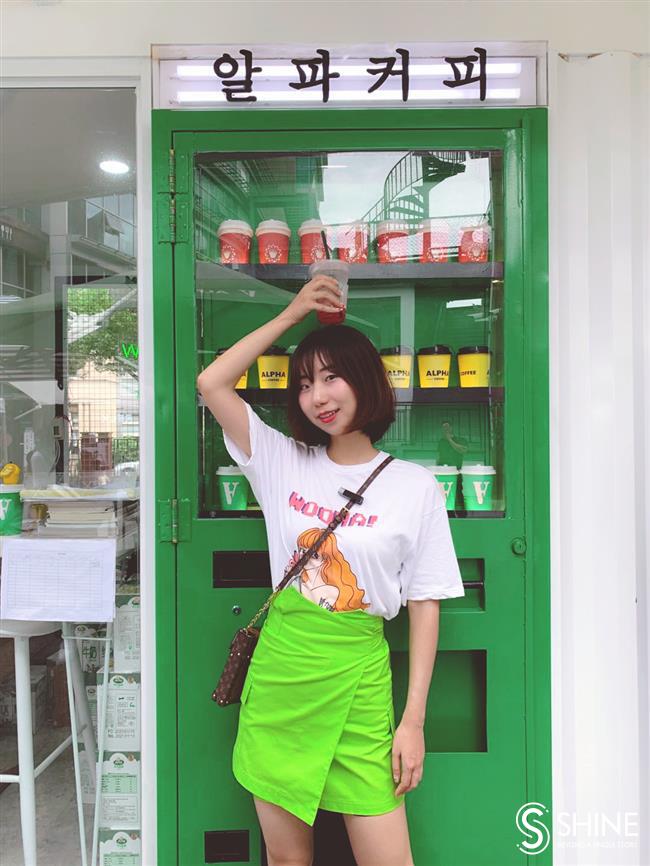 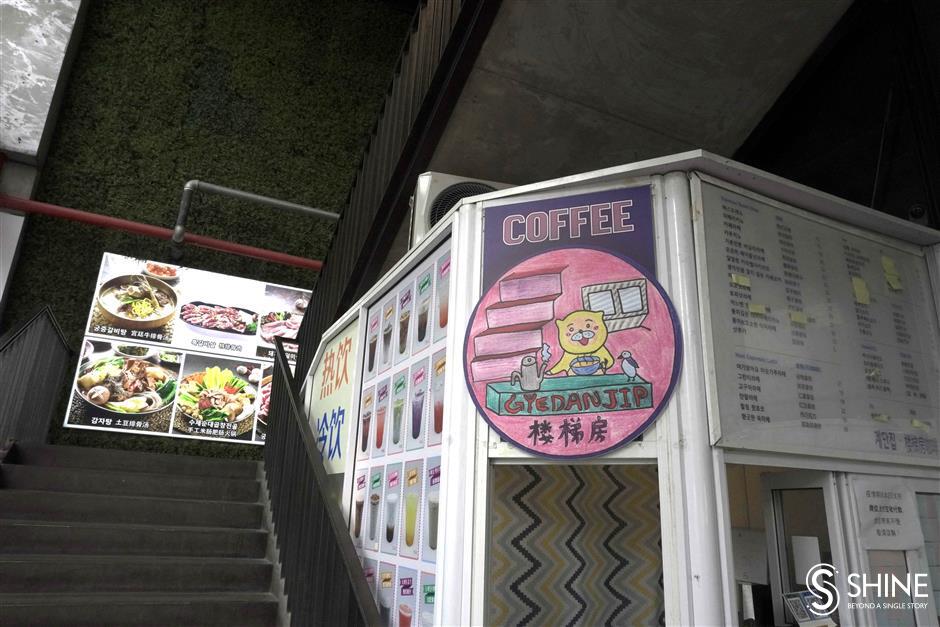 Make your stickers the Korean way

A popular form of photography with the young generation, photo booths can be found everywhere in South Korea. Stickers take the form of a vertical set of four consecutive photos, and are highly customizable. Choose your background and filter, strike four poses, and in the blink of an eye, you get two lovely stickers on the spot.

The photo booth on Hongquan Road offers free accessories (such as hair bands, doll wigs, sunglasses) for you to choose from, adding a rather comic touch to your pictures.

Think about your poses beforehand. Once you click the start button, six shots will be taken automatically at 15-second intervals. After that, you can choose four of the six to make the stickers.

The price for a set of stickers (two prints) is 35 yuan. WeChat and Alipay payments are supported. 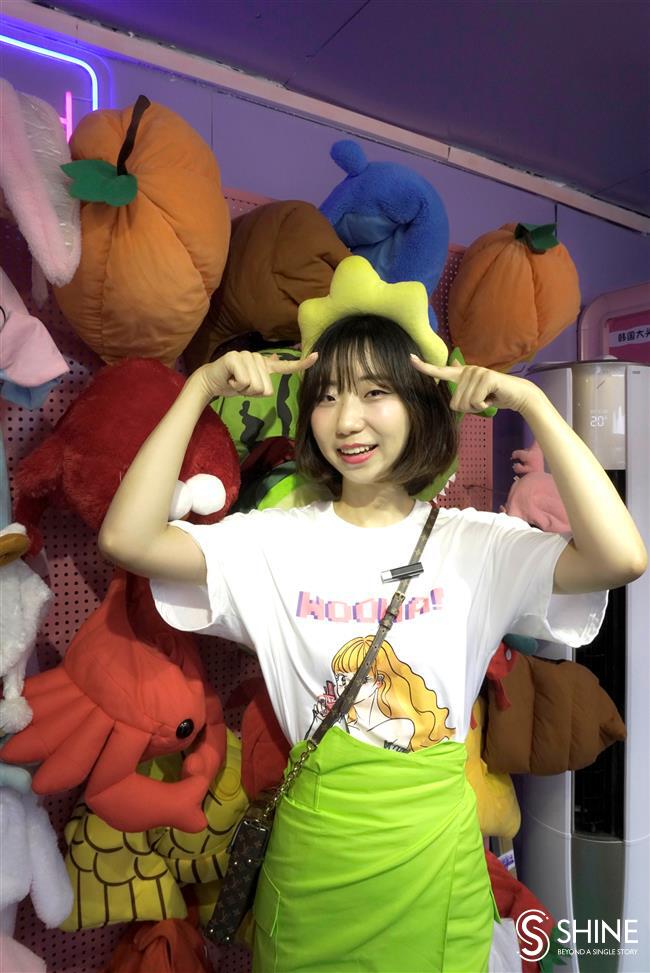 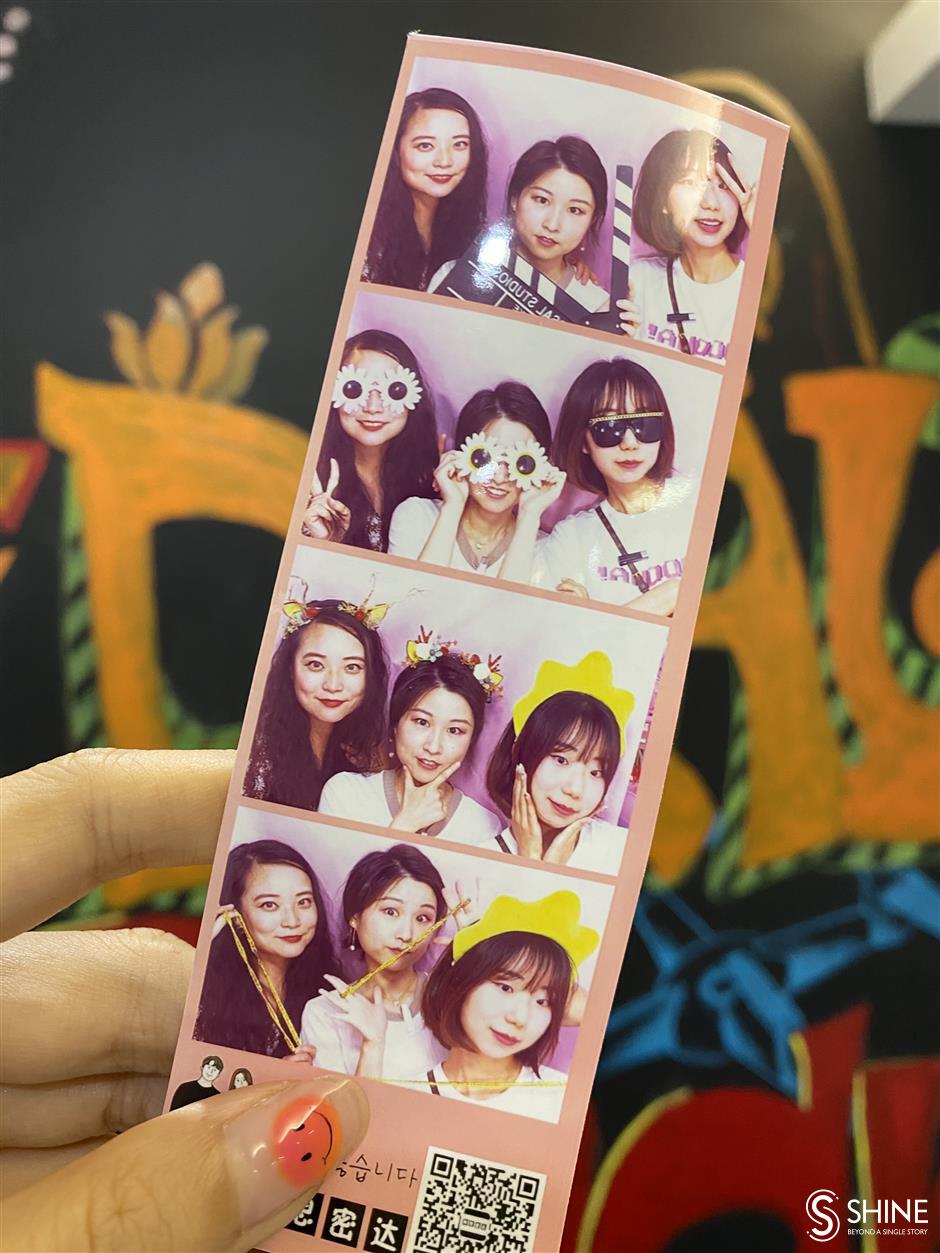 Coco (left), Shirlene (center) and Fiona on their lovely stickers

A shot of soju at pojangmachas

Pojangmachas are makeshift outdoor restaurants that spring up on street corners or in empty lots in South Korea. Since the 1950s, they’ve been a place where office workers can fill up on affordable eats and a shot of soju after work. Almost every Korean drama contains an episode in which the male protagonist downs his sorrows with bottle after bottle of soju while sitting alone in a pojangmacha.

In the evening, the area behind the West Tower of Jingting Tiandi comes to life with an open-air night market. A row of tents hark back to the pojangmachas that you find in South Korean cities.

On our budget, we tried seafood pancakes (48 yuan), pork bellies (48 yuan, you have to order two at a time) and spicy noodles with conch (28 yuan) at Mr Leng San.

“Leng San,” literally Cold Three, is a traditional Korean meat treatment in which fresh black pork is quickly frozen at minus 40 degrees Celsius to retain its flavor. Served with Korean barbecue sauce and flavoured side dishes, these sizzling barbecues are truly appetitive. The dipping sauces and side dishes are available in unlimited quantities.

Also, don’t forget to dip the seafood pancakes in the special vinaigrette they offer. 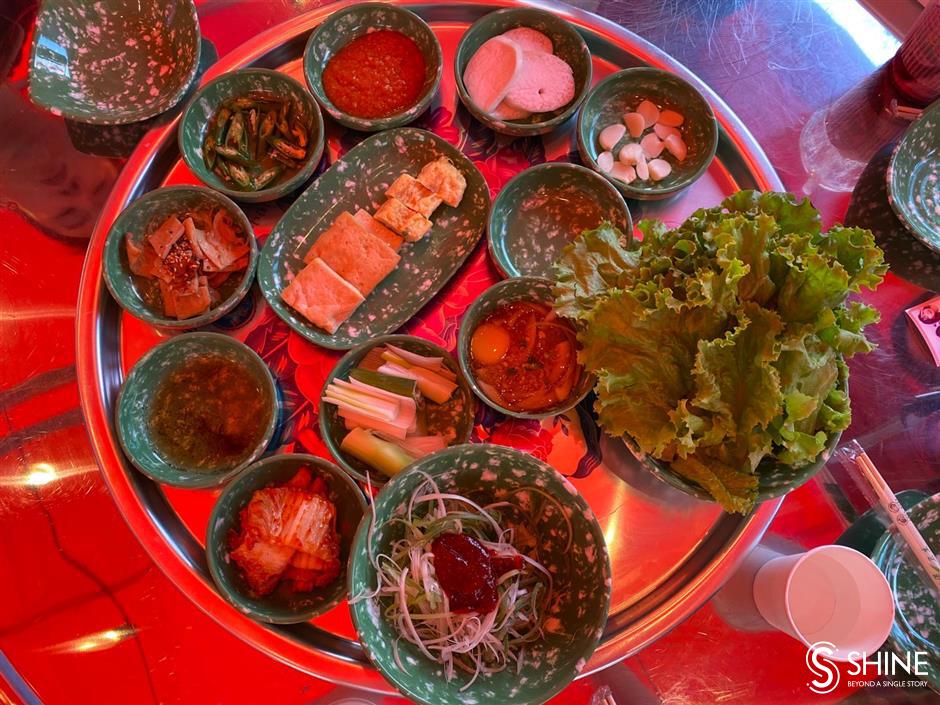 The sizzling barbecues at Mr Leng San are truly appetitive. 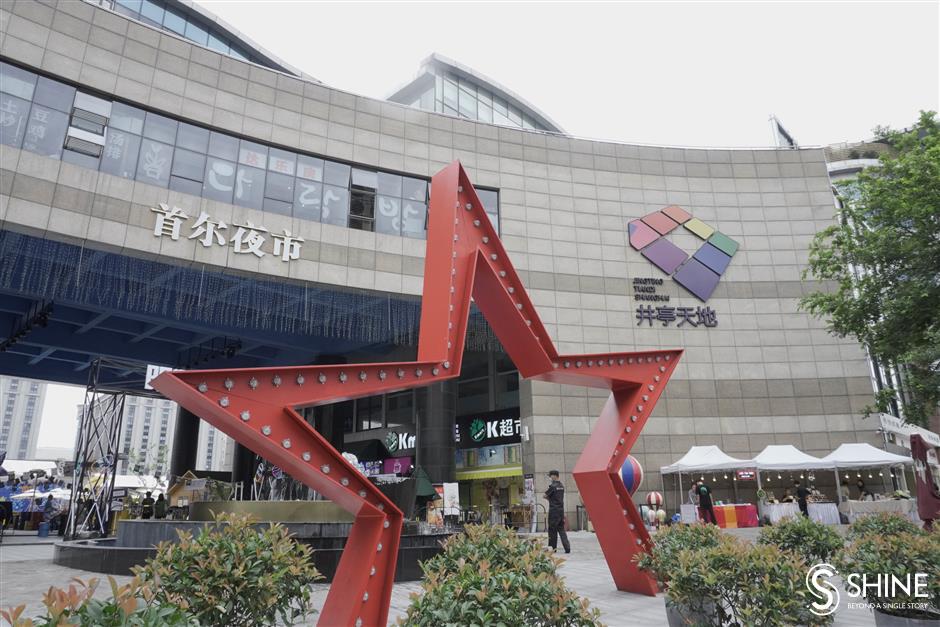 In the evening the area behind the West Tower of Jingting Tiandi comes to life with an open-air night market.