A broken violin? Here's the place to get it repaired

One shop owner in Shanghai became so popular after several online articles about him went viral that he had to set up a lottery pool for reporters wanting to interview him.

I was the lucky lottery winner, so I went to the head of the line.

To the sound of the strings of a lap steel guitar that Feng made himself, I come to his shop. I gaze at the window display of numerous instruments. On the side of one guitar hanging upside down, Feng has written, in English: “Buy and sell 2nd hand instruments/ musical instruments exchange/ repair, cosmetic, tuning, change string, piano transfer.”

Just as I am about to greet Feng, a middle-aged man holding several self-made postcards printed with a Feng’s picture asks the shop owner for his autograph. The man says he became a fan after the online article.

“It is the first time that anyone has ever asked me for an autograph,” says Feng, who genuinely seems overwhelmed by the attention. “To be honest, I don’t know why the articles were so popular. Maybe my story just resonated with readers. Some people come to my shop and tell me the stories bring back memories.” 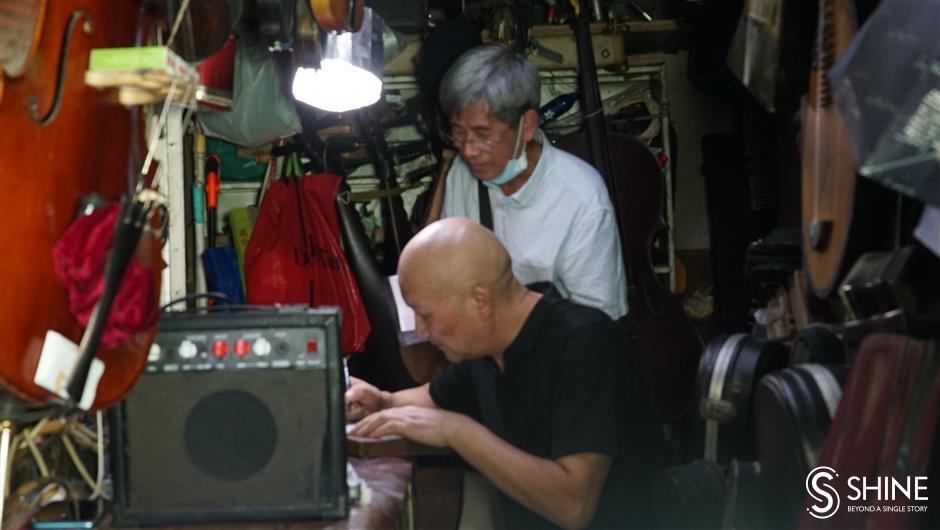 A fan gets an autograph after Feng became celebrated online.

Feng’s 10-square-meter shop is filled with dozens of musical instruments, varying from common Western instruments like violins, guitars and clarinets and Chinese instruments like the erhu and pipa, to more exotic instruments such as the rawap, a Uyghur guitar, and the dombra, a Kazakh stringed instrument.

On a hot summer day, three fans whirr to stir up a bit of breeze inside.

“Air conditioning would crack the instruments, which are mainly made of wood,” Feng explains. “I know this shop feels extremely crowded, but I am happy here. When I look at the instruments, I feel like I am seeing my own children.”

Feng, whose parents originally came from Hong Kong, speaks Mandarin with a Cantonese accent so he has been nicknamed “Little Guangdong,” after the Chinese for Cantonese -- guangdong hua.

His parents ran a business in Shanghai before the founding of People’s Republic of China in 1949. Earlier in that year, before the end of the second Chinese Civil War, Feng’s parents planned to take their two daughters and leave Shanghai by ship. His father exchanged four bars of gold for four tickets. However, Feng’s mother discovered she was pregnant just a few days before their departure date. After already having lost two sons, she decided against traveling.

Feng, who was ultimately born in Shanghai, incredibly saved his family. The boat they were scheduled to board sank after a collision with another vessel, leading to the deaths of 1,000 passengers and crew members.

Because he brought good fortune to the family, the baby was named Feng Shuncheng, meaning “smooth and successful.”

The little “savior” was also a little troublemaker. He was forever taking things apart to see how they worked -- his mother’s German piano, a cuckoo clock, a Zeiss camera, a phonograph and a radio.

By dismantling and reconstructing, Feng taught himself how to fix radios.

When helping repair a neighbor’s radio, he met a man who worked in a musical instrument shop. The then teenage Feng asked if he could visit the shop, where he later secretly tried to repair instruments.

“I was really naughty when I was young,” says Feng. “My mother often asked me why I always looked like my head was in the clouds. What she didn’t know was that I was actually thinking.”

Feng suddenly mentions the familiar Chinese children’s story “Kitten Goes Fishing.” In the story, a kitten goes fishing with its mother. The kitten is twice distracted, dropping its fishing rod to chase a butterfly and then a dragonfly. Meanwhile, mother cat catches two fish. The kitten wonders why it has caught no fish. Moral of the story: staying focused is the key to success.

“I have a different interpretation of the story,” says Feng. “I think I am the kitten who goes after a dragonfly and a butterfly. In my mind, it is important to do what I like.” 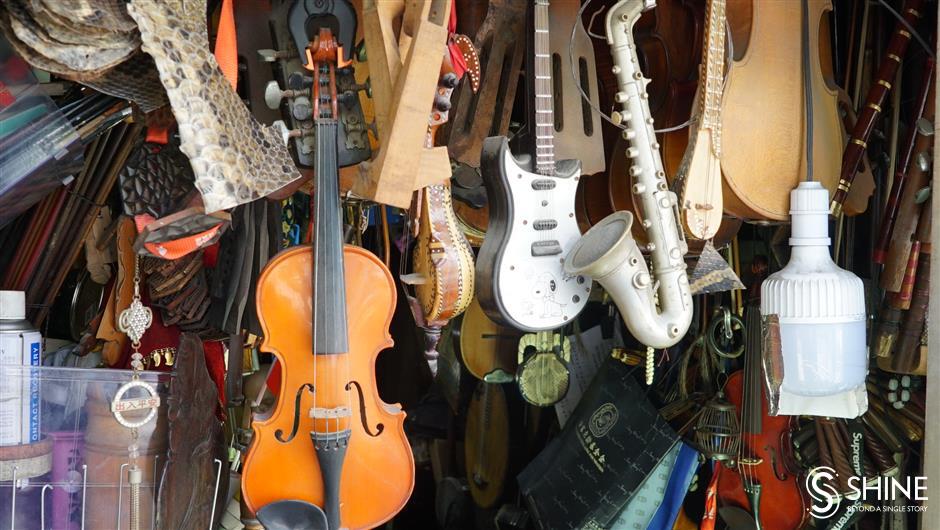 A jumble of musical instruments fills the tiny shop.

The independent “kitten” left Shanghai for Shenzhen in the early 1980s to pursue his dreams of a musical career. He joined a musical troupe and met a Soviet girl whose multiple talents included playing the balalaika, a Russian stringed instrument.

“Believe it or not, she used to be a wild animal trainer at a circus,” says Feng. “She taught me dog training.”

Some men captivated by her beauty actually shinnied up an outside pipe of her apartment building to get a glimpse of her. Feng resolved that problem by smearing the pipe with thick lard.

Though the pair fell in love, but they didn’t end up together due to strong opposition from Feng’s mother.

Feng has a memento of sorts to remember the girl. One of the instruments in his shop is a balalaika. It is decorated with an oil painting and hangs prominently on one wall.

“When I found it in a flea market in America, its neck was broken,” says Feng. “I bought it for only US$10. It evokes memories of those happy days so long ago.”

Feng began a new journey in 1984. Destination: Perth, Australia, where he adopted the English name Charlie.

“I wanted to prove myself,” says Feng. “I studied guitar at a school there. After a while, I asked my teacher how I was doing. When he replied that I was below average, I decided to change my major to making and repairing musical instruments. I wanted to be the best.”

Two years later, Feng returned to Shanghai and met his current wife. For a while, he worked as a DJ at a bar on Hengshan Road and did in-home repair and instrument tuning. He even started a small pet business.

“It was year of the dog,” says Feng. “I bought 14 Chihuahua dogs in Vietnam and quickly sold 13 of them. Strangely, I couldn’t sell the last one, so I took the dog as my own pet. Based on the dog training I learned from my Russian girlfriend, I taught the puppy commands. He later won many dog show championships.” 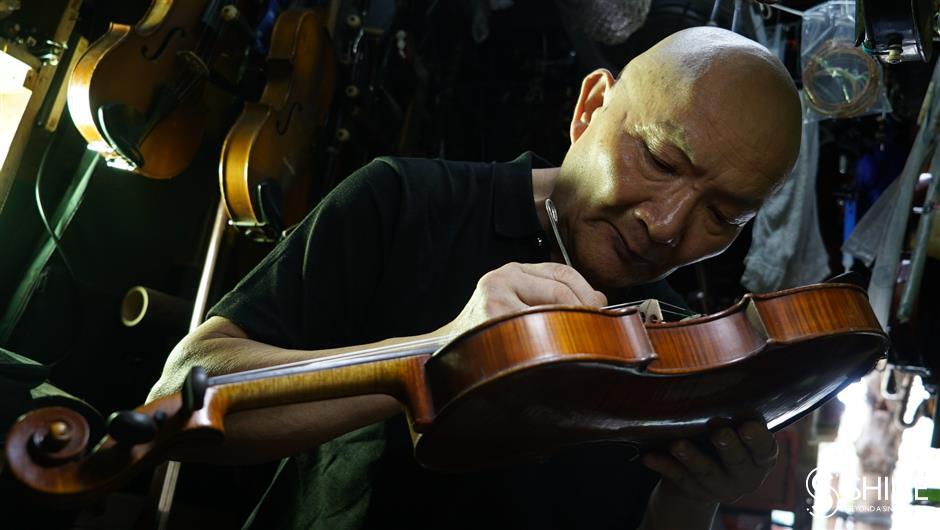 Feng repairs a German violin made in 1948.

All other work aside, Feng said repairing musical instruments has always remained his favorite vocation. His life revolves around his somewhat faded repair store.

Before accepting a new order, Feng always asks the owner whether the repair is urgent. He refuses work that requires him to do anything in haste.

“I first need to make a detailed plan,” says Feng of the repair process.

He made a his own bowed-stringed instrument, using a bamboo tea box as the sound board, a stainless-steel broom handle as the neck and a wooden artwork sent by a friend as the back. Like the traditional Chinese erhu, the sound box of Feng’s instrument is covered with python skin.

Covered with aluminum foil and decorated with green jadeite, the lap steel guitar is Feng’s favorite musical instrument. The logo pasted on its head is a label pinched from a handbag his wife bought in Hong Kong.

Made more than 40 years ago, the guitar features timber difficult to get at that time. Feng said he finally found what he wanted in wooden doorframes at a demolition site. He “bribed” a site builder to give him the doorframes with a packet of Peony-brand cigarettes, which cost him half a yuan.

“One of my friends later bought it off me for US$100 dollars and took it to America,” says Feng. “Several years ago, he called me from overseas and asked if I wanted it back. Of course I did! The guitar had been stored in a garage for a long time and was in a state of disrepair. I will never sell it again.” 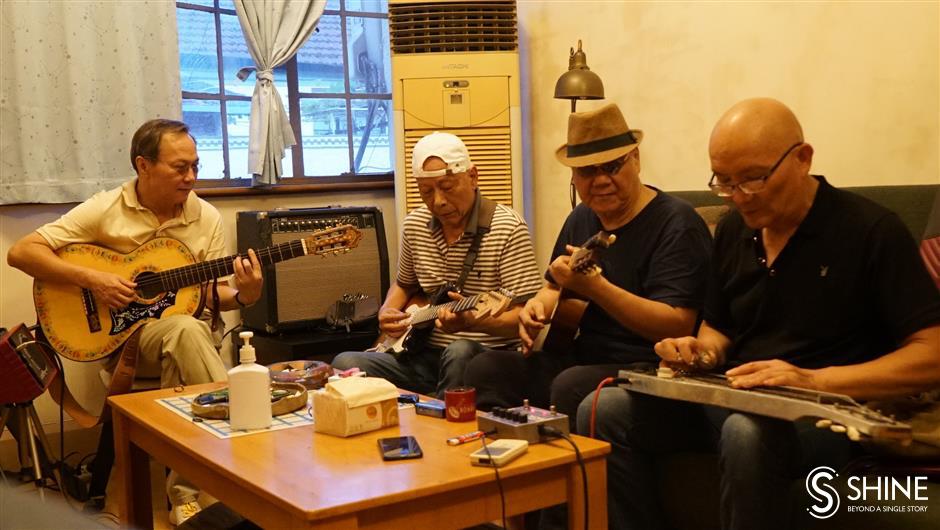 It is a Friday afternoon. Closing his store and picking up his lap steel guitar, he leaves to go make music with three old friends.

Rong Zunwen, 75, plays the electric guitar; Jia Liang’an, 71, is lead singer; and Chen Zhengchang, 64, plays bass. The group was once well-known in the local music circles. Though they are past their performing heyday, they are still meticulous about music-making and their appearances.

Shanghai Daily is going to shoot a video of them. Before that happens, they tune their instruments, test the microphones and don sunglasses and caps. Cool!

The quartet performs the Cuban folk song “La Paloma,” performing in perfect sync with one another.