With 127 well preserved ancient structures dating back to the Ming Dynasty (1368-1644), Qing Dynasty (1644-1911) and the Republic of China (1912-1949), Cangcheng, an ancient town in Songjiang District, is extremely different from other ancient tourist-trapped Chinese towns as it has no restaurants or chain souvenir stores inside its old historical buildings.

Renowned as the city’s biggest rice-storing spot and the starting point for the water transportation of grain to the capital in the Ming and Qing dynasties, Cangcheng is returning to what it once was after an ongoing renovation project.

So far, renovation work has been completed on 25 old residences and relics in the area, with several of them now open to the public. The highlights are: Songjiang Cloth Art Gallery, Zhang Family Grain Store Museum, Du Family Old Residence and Zhang Ming Art Gallery.

Follow iDEALShanghai to explore the old residences and exhibitions inside them.

If you want to appreciate transportation of grain culture in Jiangnan, regions south of the lower reaches of the Yangtze River, you must not miss Zhang’s Grain Store Museum. Utensils used to weigh, process, cook and store rice are displayed, while the history of Songjiang’s water transportation system is also illustrated with a detailed introduction attached on the side to help you better understand Jiangnan rice culture.

Inside the museum, the most eye-catching sight is the retro-style counter, with a classic wooden abacus on it. Behind the counter there is a straw rain cape and a bamboo hat hanging on the wall, old objects that provide an ideal illusion of traveling back in time.

Different millstones (from small to large) are on display in the museum, allowing you to know how the ancient people ground their rice. What’s more, there is a rice cake making service inside the museum — one of Songjiang’s local specialties with red bean paste fillings. 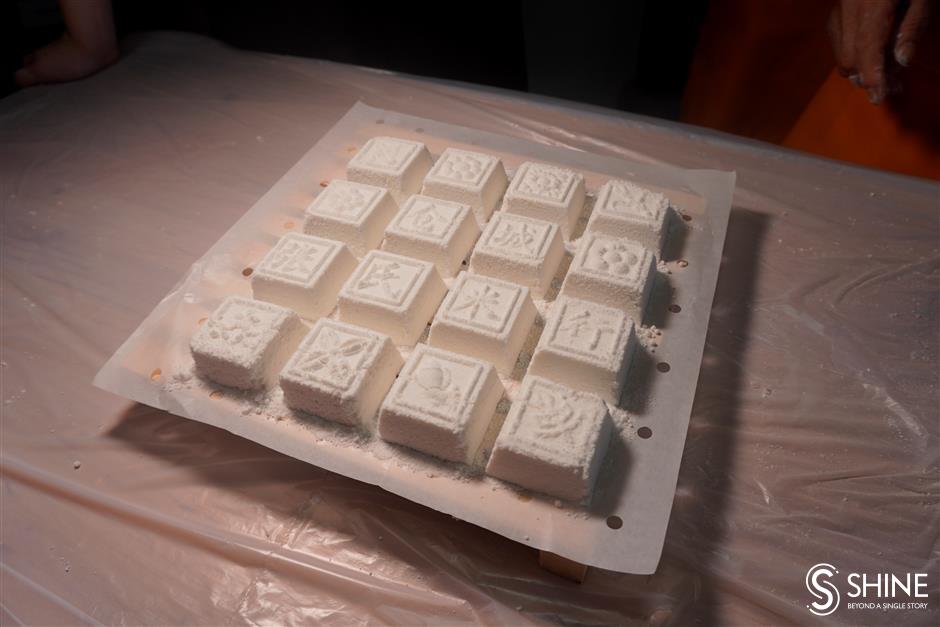 Rice cakes with red bean paste fillings are one of Songjiang’s local specialties.

A utensil to steam rice is displayed at the museum.

Located at 266 Zhongshan Road W. and renowned as “Du’s Carved Building,” Du Family Old Residence is a typical Jiangnan watertown residence with a four-row structure. It was built in the Qing Dynasty by a wealthy man surnamed Du for his married daughter. Characterized by its exquisite wood and brick carvings, the historic building is of great artistic value and ambience. Most of its furniture features genuine antiques from the Ming and Qing dynasties.

Every door panel, window frame and railing are finely carved with detailed patterns of animals, flowers or clouds. Through the windows, long vines hang down along the wooden walls of the courtyard. The residence features nearly 20 intangible culture heritages, including Jiangnan sizhu (string and wind music) and Gu-style embroidery. 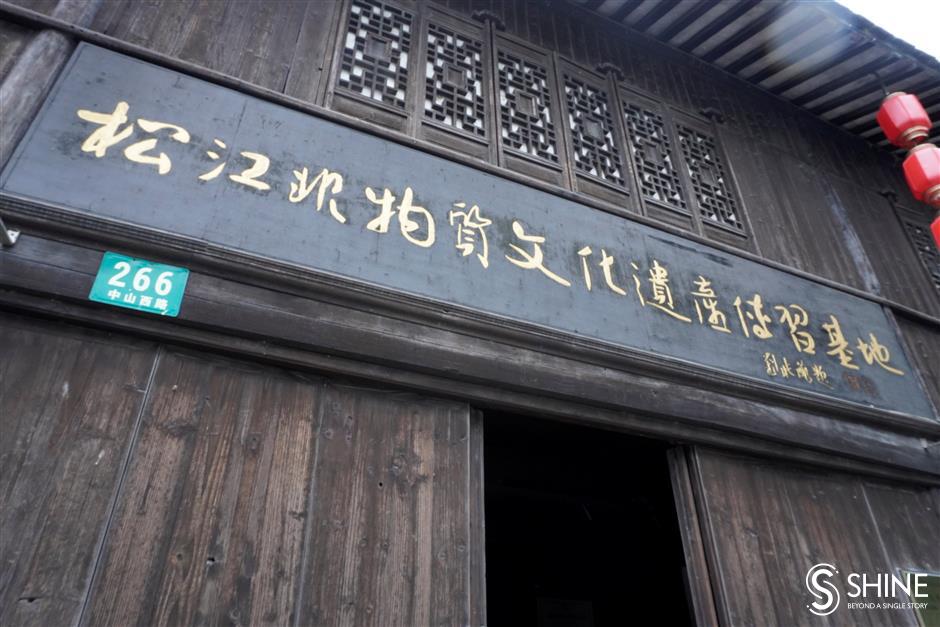 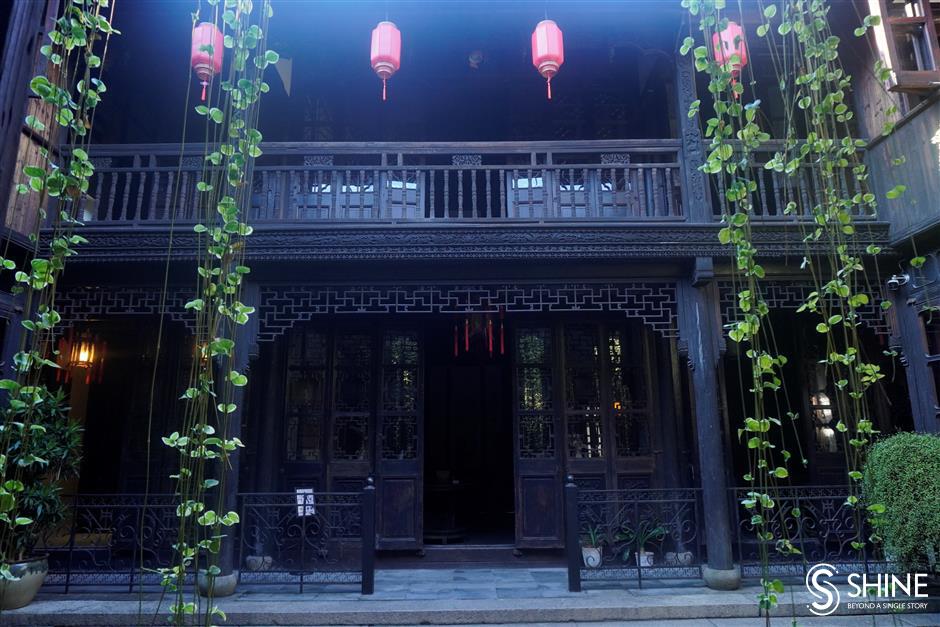 Vines down from the roofs of Du Family Old Residence

Besides grain transportation, old cotton cloth is another important part of Songjiang’s cultural deposits. Once the center of the nation’s cotton textile industry, Songjiang has enjoyed a worldwide reputation for its cloth making technology.

In the 19th century, Songjiang cotton cloth was even favored by the British royal family, as evidenced by the trousers worn by the era’s upper-class English gentlemen.

The newly opened Songjiang Cloth Art Gallery reveals vintage cloths that are not available in the market today.

Located in an old two-story residence, the gallery displays different kinds and patterns of old Songjiang cotton cloths, from purple cotton cloth made in the Qing Dynasty to the Jiefang cloth of the 1950s.

There are also weaving looms, spindle spinning wheels and hand-cranking spinning machines displayed in another workshop, which were used in the rural domestic textile workshops of the past.

Fang Yuehong, a 68-year-old Songjiang native, taught iDEALShanghai reporters how to operate a weaving loom in the workshop: Hold it with one hand, step on the pedal, throw the shuttle across the loom skillfully and back again with the other hand.

“You need to practice for years, and I started to learn how to spin and weave by myself at my 14th birthday,” said Fang.

As a highlight in the gallery, old Songjiang cotton cloths are transformed into different crafts, such as cheongsams, jackets, handbags, shoes and so on.

All the crafts are for sale at affordable prices. A suit of cheongsam is about 1,200 yuan (US$174), while 200 yuan will get you a clutch bag with embroidery on it. The bestseller is a handmade doll in old Songjiang cloths, which has a blank face for you to draw eyes and lips. 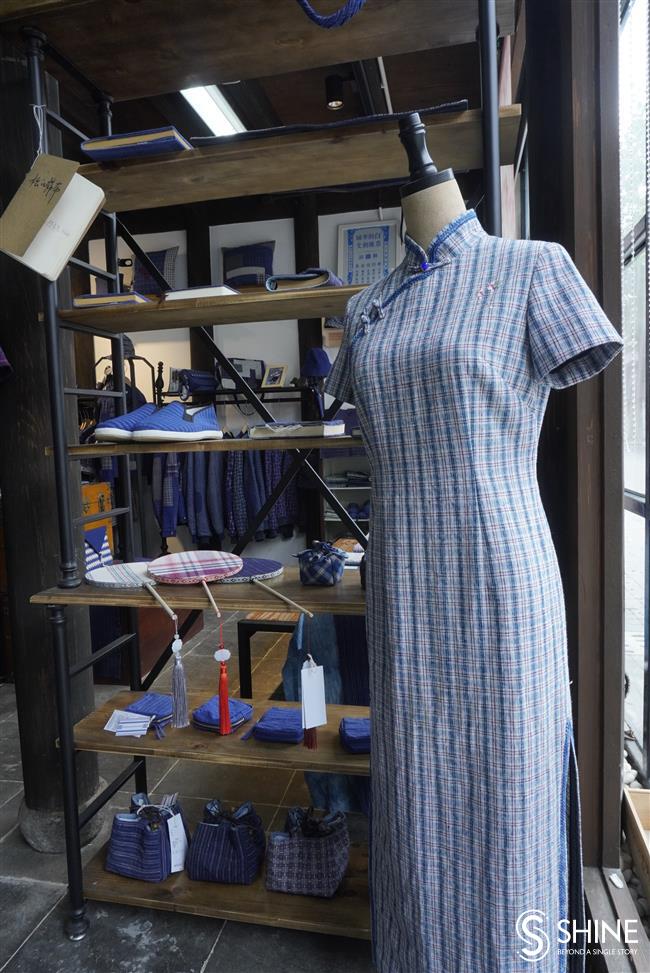 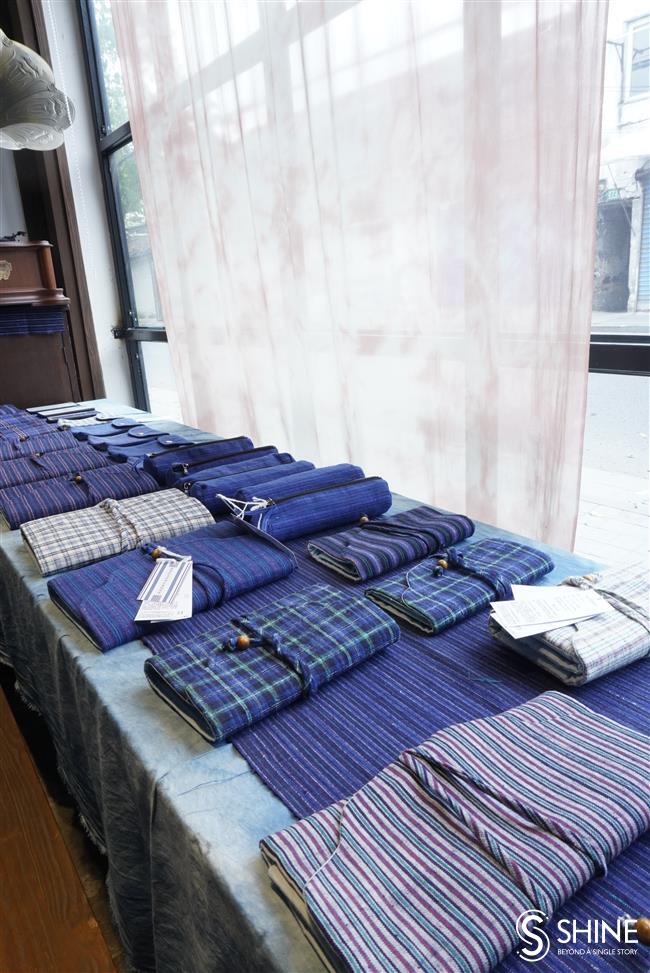 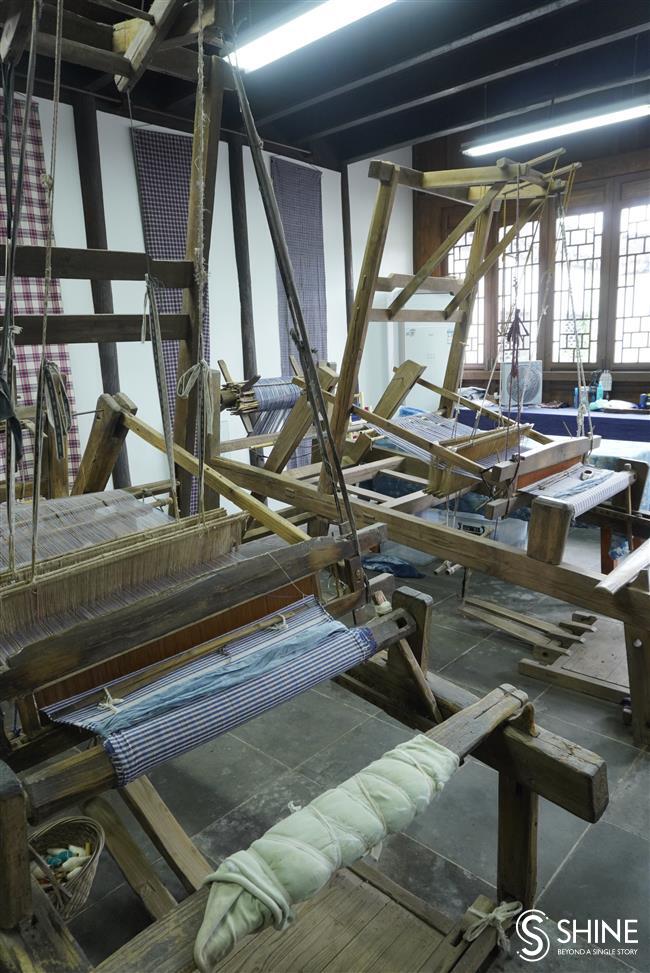 Weaving looms are displayed at the cloth art gallery. 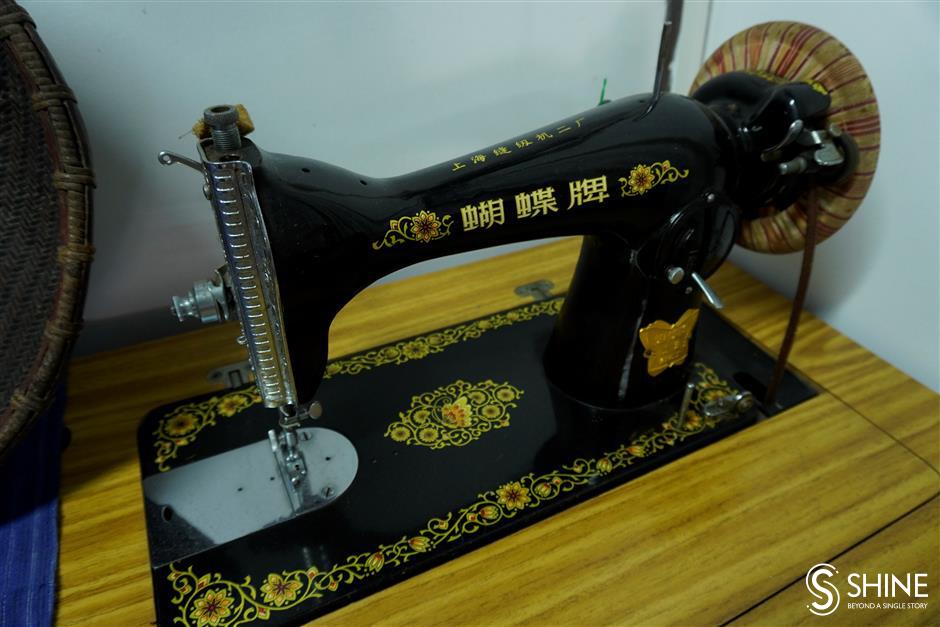 A sewing machine used by a tailor to make cotton crafts

A three-courtyard residence that dates back to the Ming Dynasty, along Zhongshan Road W., has been transformed into Zhang Ming Art Gallery.

The owner Zhang Ming is a renowned painter and professor at the Shanghai Institute of Visual Art.

Zhang’s representative paintings, with beautiful ginkgo trees, fill the gallery. The painting patterns are printed on a lot of craft products, such as porcelain items, screens, silk scarves and fans.

What’s more, there is a traditional Chinese fan exhibition inside the gallery. Visitors are welcome to take part in Zhang’s fan workshop and paint a ginkgo trees’ folding fan — but don’t forget to make a reservation. 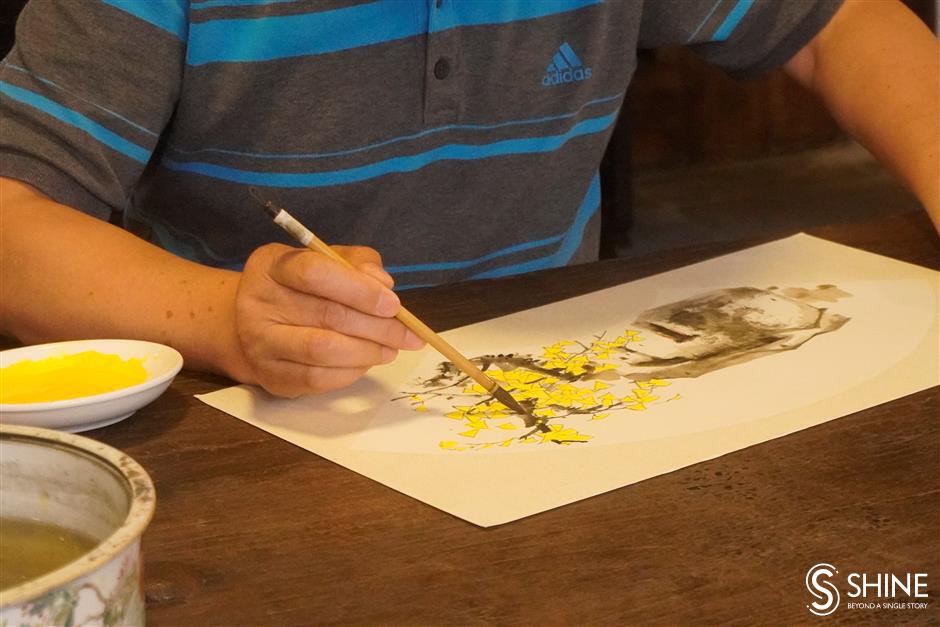 Zhang Ming, a renowned painter, works on a ginkgo tree painting at his gallery. 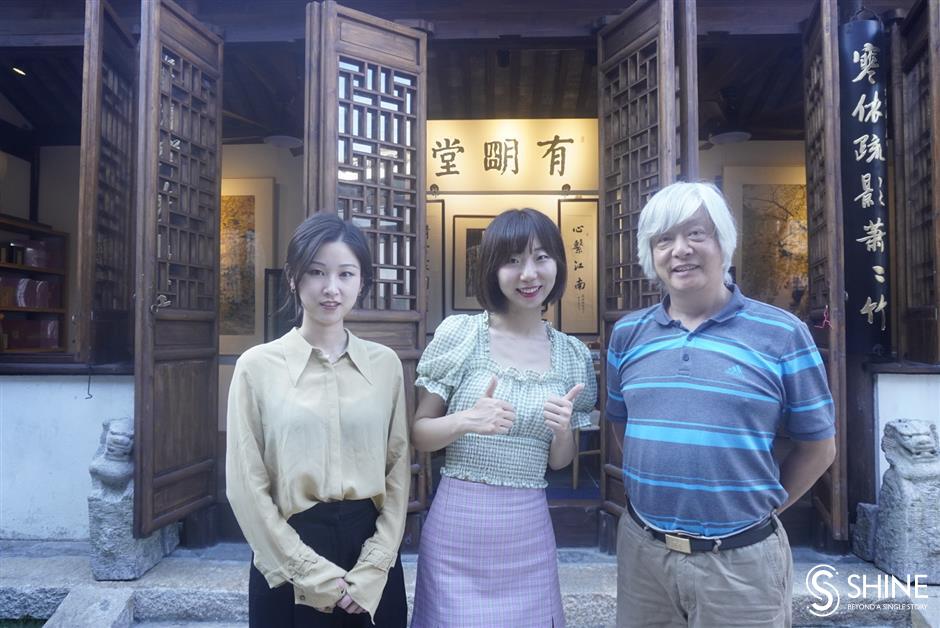