The threads that bind us, past and present

Lu Fang facetiously calls himself a “walking unearthed relic. Indeed, to many passers-by, he may look like a throwback to a bygone era.

“Clothing is a communicator of culture,” he says, sporting a plaid changshan he made himself. 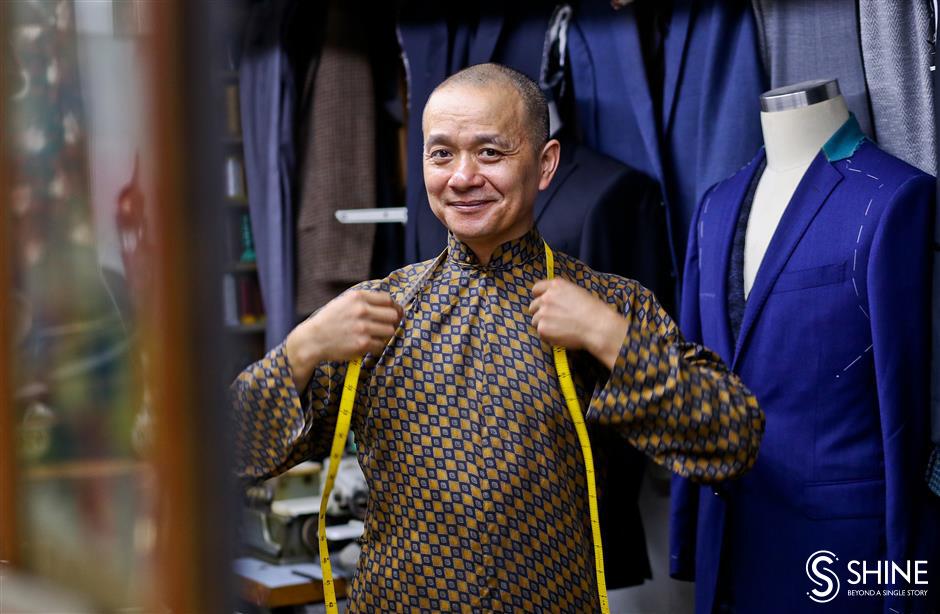 A native of Fenghua District in the coastal city of Ningbo, Lu was the fourth child in his family and had to settle for hand-me-down clothes. A strong desire for new clothes spurred him to learn tailoring.

Lu regards himself as an authentic “Fengbang tailor,” a style of tailoring that originated in Fenghua back in the early 19th century. Thriving in Shanghai, the style came to be more commonly known as Hongbang, or “red group” — a term initially applied to tailors who made clothes for Westerners and was apparently based on a Western color of hair. 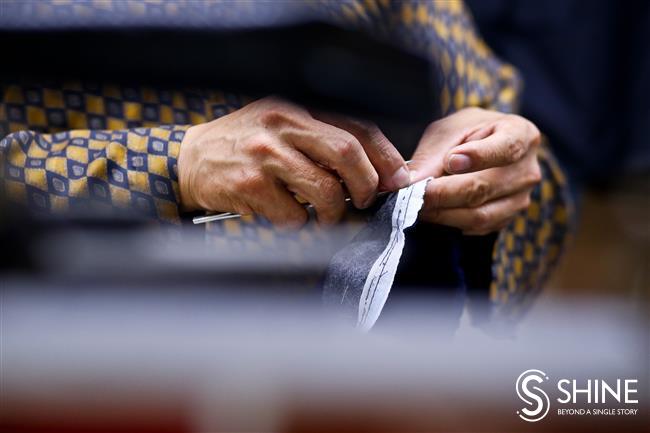 An authentic Hongbang tailor, Lu is meticulous in every step.

His shop, located on Kaixuan Road in Changning District, is more than just about clothing. It’s also a mini-museum that includes a Qing Dynasty (1644-1911) sewing machine, old fashion magazines and vintage irons ­— all collected while wandering in Saturday curio markets.

Most people are familiar with the cheongsam, the distinctive body-hugging women’s dress that featured in so many movies depicting the early 20th century. The cheongsam in Lu’s shop don’t quite have such a sexy look.

“Cheongsam, in fact, evolved from men’s long robes during the Republic of China era (1912-49),” Lu explains. “The cheongsam were originally worn loosely over the body. However, I find that the collars of early cheongsam were tighter than today’s, probably a reminder that women were supposed to speak softly.”

Lu estimates he has made about 100 pieces of traditional-style clothing for people of all ages. There has indeed been a bit of a retro trend where clothing is concerned.

“In order to cut the fabric for changshan, my worktable is 3 meters long, whereas a normal cutting table would be about 1.8 meters,” he explains to me.

His tailor shop tripled in size to 90 square meters in order to display his clothing collection and museum curios, but it’s still not large enough. A lot of knick-knacks are piled into leather suitcases stacked up on the floor.

“Some old objects, such as the electric fan and the 555-brand clock, were sent by elderly people unwilling to throw away memorabilia,” says Lu. “They think my shop is the best home for nostalgic things.”

An 1895 sewing machine and some vintage clothes hanging on a wall were sent to Lu about five years ago by a local octogenarian.

The elderly man, who lives on Yongjia Road in Xuhui District, was born into a wealthy family, Lu says. His family, originally from Ningbo, had its own resident tailor.

The more than 100-year-old cheongsam and changshan are exquisitely made, lined in fur and hand-embroidered on the outside.

“The elderly man told me that his mother passed away a year ago and he was reluctant to give her things to curio traders or to burn them (a traditional Chinese funeral tradition),” says Lu. “He searched on Baidu and found my shop.” 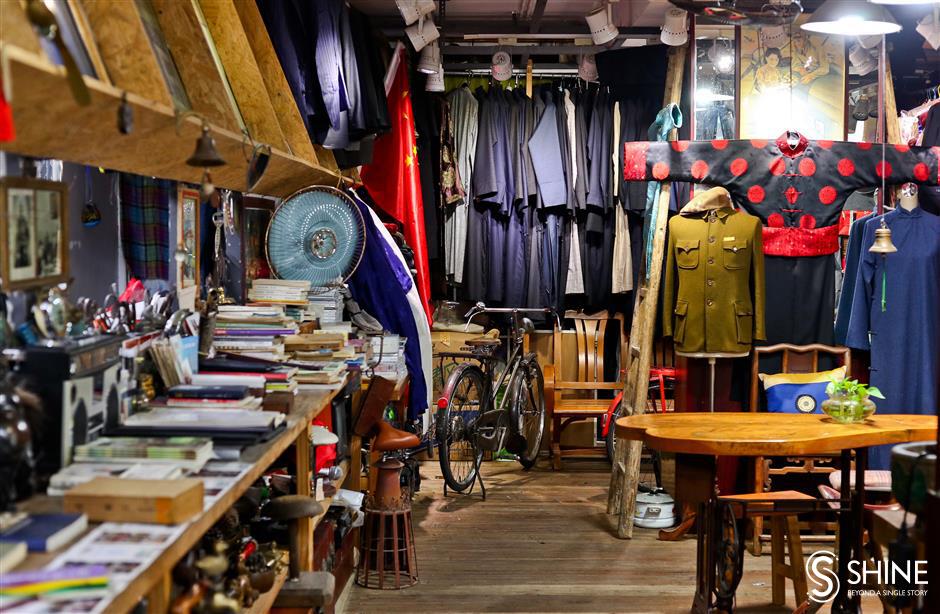 More than just about clothing, Lu’s workshop is also a mini-museum. 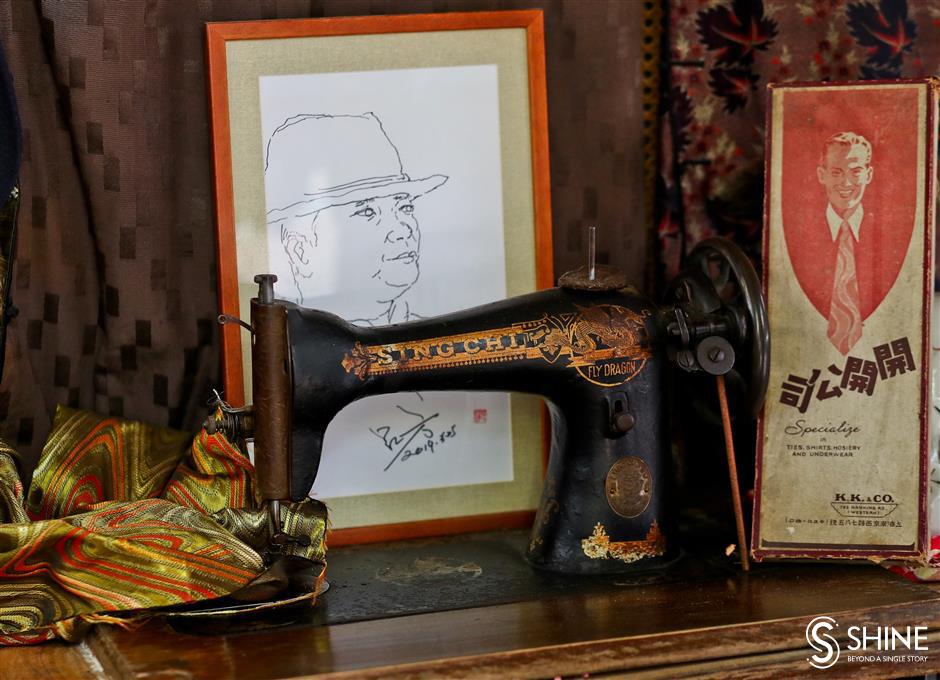 A small group of parents and students in school uniforms pays a visit to Lu’s workshop while I am there. One mother, who says she found out about the shop on Xuexi Qiangguo, a current affairs app designed for members of the Communist Party of China, explains that the visit is educational.

“I’ve brought my daughter and her classmates to get a glimpse of traditional Chinese clothing,” she says. “It’s part of our national culture.”

The visitors are invited to try on some of the clothing. The mother chooses a dark blue, silk cheongsam decorated in a subtle pattern, while the eighth-grade girls don cotton cheongsam with cuff buttons more suitable to their age.

The mother, who confesses she once dreamed of becoming a tailor, says the visit to the shop has broadened her understanding of cheongsam.

Touching and wearing the old clothing and taking photos are encouraged in this shop-cum-living museum. There’s no charge, though Lu admits his shop barely breaks even nowadays. If the rent goes up, he says he may have to close.

“To be honest, if I ran just a tailor shop, my life would be much easier,” says Lu. “However, I wouldn’t feel right about that. Ever since I left my hometown and came to the big city in 1992, I wanted to honor the legacy and spirit of Hongbang.”

When he first opened a small tailoring shop on Kangping Road in Xuhui District, made-to-order clothing was still quite popular.

“I worked until three or five in the morning every day, 365 days a year,” says Lu. “My worktable was also my bed.”

After finally attaining a comfortable income, Lu moved to create his own personal brand and build a wider clientele. He moved to his present location in 2010 and expanded into alterations of clothing passed down from older generations. He repositioned his shop as a place that created “fashion and eco-friendly” clothing.

However, much to his dismay, he found that 90 percent of orders involved alterations to luxury or foreign-brand clothing.

“I couldn’t understand why people would pay such large sums of money on clothes that didn’t fit,” says Lu. “It hardened my resolve to try to popularize Chinese clothing and the spirit of Hongbang.”

He opened his little museum when he expanded his shop. Despite the extra time it takes him, Lu never tires of introducing the culture of Chinese clothing to visitors. Many of them come from all over the world. In order to keep his core business going, he rises early and gets home late. 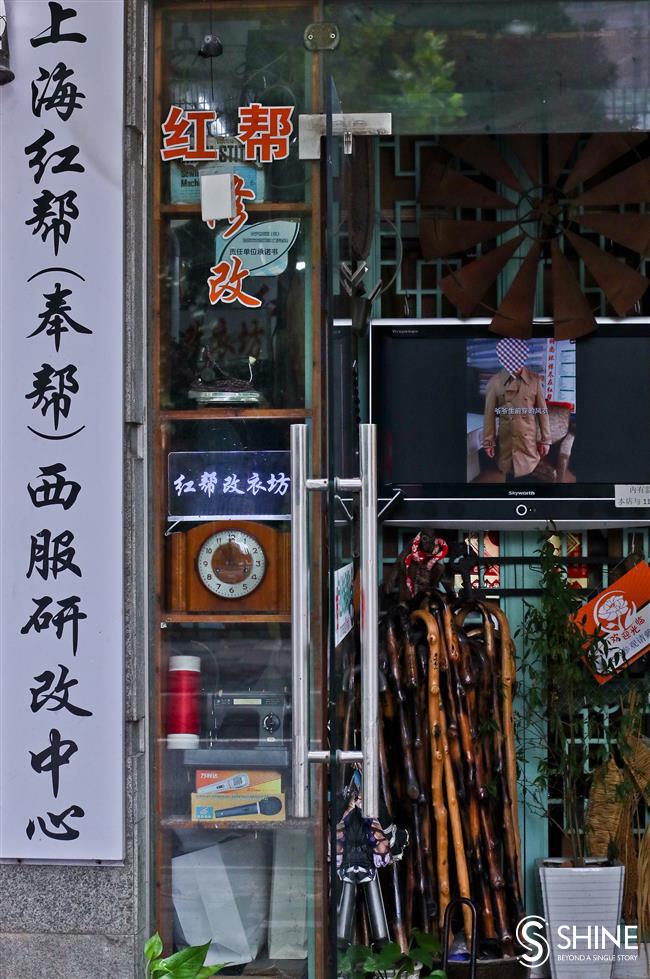 An 87-year-old man enters Lu’s shop. He is seeking a bamboo walking cane. Lu gives him one free of charge. It’s one of many small, free services offered in the shop, including punching additional holes in belts, pumping up bike tires and altering the length of trousers for the disabled, retired soldiers, model workers and people 70 years or older.

“Giving back to society is of great importance to me,” says Lu. “I am not seeking fame or money. I just want more people to appreciate Chinese clothing as a vital part of our culture.”