The birth of a baby is a wonderful and very complex process, yet sometimes things don’t go the way they should.

A child can be born with a congenital defect, have breathing problems or maybe an organ has not yet fully developed, leaving life hanging by a thread. If this is the case and a newborn is suffering from a life-threatening complication it is sent to a neonatal intensive care unit (NICU) for treatment.

“We’re the first people to take care of ill babies, not their parents,” said Dr Bei Fei, vice director of the neonatology department at Shanghai Children’s Medical Center. “Because parents are not allowed to accompany kids in NICU, they have to rely on our medical staff.” 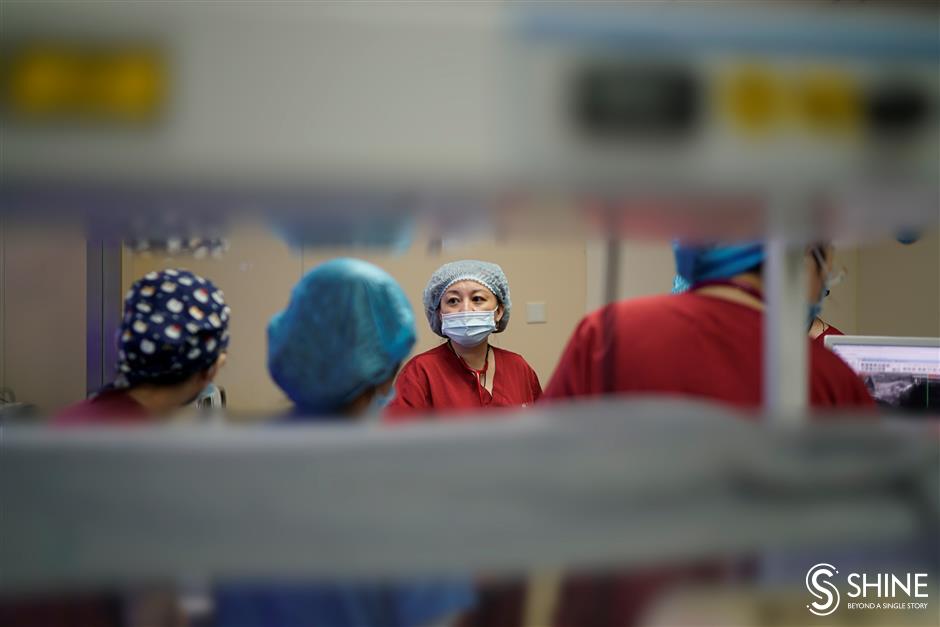 Bei Fei works in the NICU.

Being a doctor or a registered nurse in an NICU can be an arduous job.

“One of our nurses can only take care of one to two babies with severe illnesses at a time. It’s not like a normal hospital where nurses can take care of four to five patients. It’s the same for doctors,” Bei said.

NICU crew care for vulnerable newborn children that require intensive nurturing. They have a passion for working with infants and families, and enjoy the high-pressure, fast-paced environment, which does have its rewards, as Bei reveals.

Bei said, “I didn’t recognize him at the time but he told me that in 2001 his daughter suffered from severe asphyxia as a newborn and he almost gave up.”

“It’s you who told me if we persist with the treatment, she will get better,” the father recalled. “Look, this is my daughter. She is now 8 years old. I brought her here to meet her lifesaver.’”

If this scene was played out in a movie theater, there wouldn’t be a dry eye in the house. Yet to Bei, she was only doing her job.

“I do not think I did anything extraordinary, but I understand it was important to that family,” the 47-year-old doctor said. 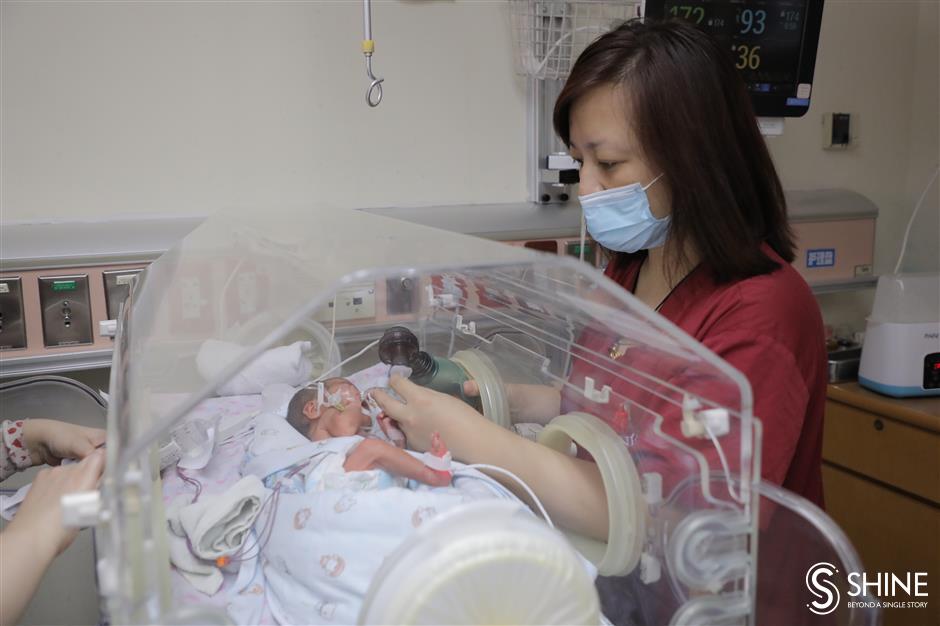 Bei Fei treats a premature infant in an incubator in the NICU.

Bei began to work as a pediatrician in 1996 before embarking on several career changes in the gastroenterology, hematology, general surgery and infectious diseases departments. But the mom-of-one finally settled on life as a doctor looking after newborns in 2002 — a job she relishes.

“Compared to treating adults, I prefer kids,” Bei said. “They are clean and pure, not only their bodies, but also the minds. Newborns are the beginning of life.”

Bei’s workday begins at 7:30am. Her first task is to communicate with the hospital’s nightshift staff, who inform her of any changes to patients’ health, before doing a round on the wards.

It’s estimated there are between 1,000 to 1,200 major cases in Bei’s NICU every year, around half of the patients they receive.

“Some severe cases could become mild cases after a day or two but some could last a couple weeks or even a couple months,” said Bei.

And some cases are more memorable than others. 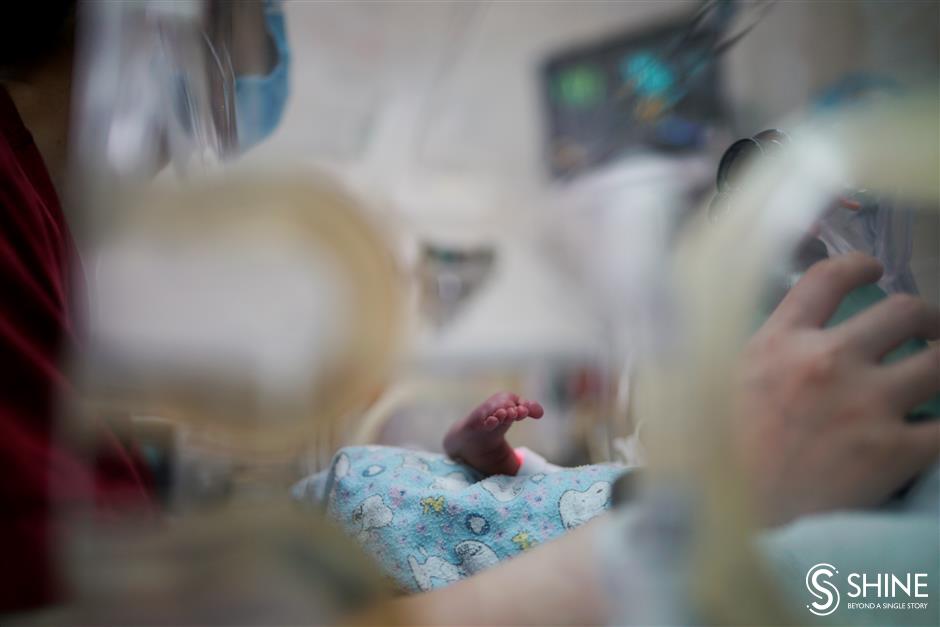 It’s estimated there are between 1,000 to 1,200 major cases in the NICU of Shanghai Children’s Medical Center every year.

Bei was presented with a premature baby boy, born on June 26, 2016, when he was just 23 weeks and six days old. The poor baby weighed only 735 grams, about the weight of five smartphones. He was under NICU observation for eight months before being discharged.

“At the very beginning I told his father, ‘There’s only 1 percent chance your baby will survive, with a 99.5 percent possibility he will suffer for the rest of his life with sequela (a pathological condition).’ His father was determined. He replied, ‘No problem, you must save him,’” Bei said. “Three times we told the baby’s parents that their baby may die from infection, but they didn’t give up.”

The baby lived with a respirator for seven and a half months before gradually learning to live without one and breathe on his own.

“Can you imagine that? With his parents’ love, faith and desire, and our skill, we gained strength from each other to save the little child,” she said.

But some babies are not lucky enough to survive because their parents give up. 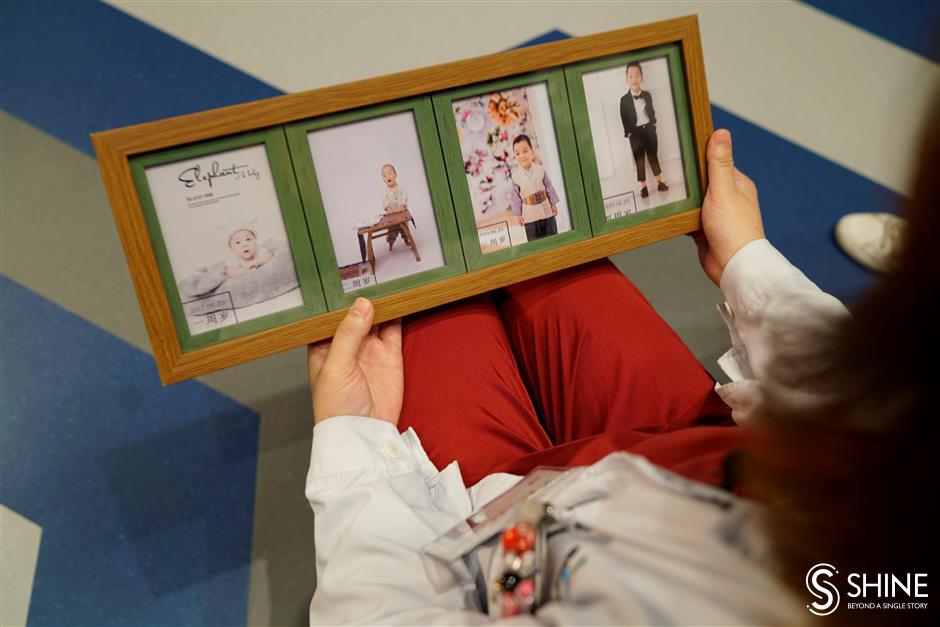 Parents of the 23-week premature baby would send Bei Fei their son’s photos every year as a way to express gratitude.

Studies show that keeping premature infants warm in an incubator will help them grow faster and reach safe levels of development more efficiently. The cost of a premature baby in NICU is about 3,000 yuan a day.

Bei remembers the parent of an extremely ill child who said, “We don’t want pain to follow us around our whole life. We are young, and we can give birth to another child.”

“This had a dramatic effect on me. It made me angry,” said Bei. “At that time, I felt powerless.”

An inner force pushes me to keep studying and improving... I really feel I can help parents with my expertise, my understanding of family and respect for life.

“An inner force pushes me to keep studying and improving,” said Bei, who graduated from Shanghai Jiao Tong University School of Medicine in 1996. “Being an NICU doctor, I really feel I can help parents with my expertise, my understanding of family and respect for life.”

Bei is also in charge of a research project on premature babies, of which there are 1.3 million in China. Her team is to monitor 1,000 families with premature babies from birth to their 18th birthday, to see if there’s something doctors can use to save a future life.

“Scientific research is not just about publishing papers. It’s for exploring, sharing and progressing in the future,” Bei said. “Our ultimate aim is to safeguard the lives of babies and their health in the longer term.” Q: What’s the meaning of life?

A: You don’t know what will happen tomorrow so do not have any regrets. No matter how old you are, you need to try your best and you will find something different.

Q: What influences you most in NICU?

A: It gives me much more respect for life and fills me with a sense of awe as well.

Life is much stronger than you think. Some fragile babies are strong enough but they struggle to survive. So I respect life. Why awe? Because you do not know when a life will disappear. Cherish every minute you are alive.

Q: Comparing to NICUs in developed countries around the world, do we still have gap between, if so, what’s the gap?

A: On a technical level, I think our gap is limited, especially NICUs in cities like Shanghai, Beijing and Guangzhou. What we lack is a humanistic concern, which we are aware of. In our hospital we are trying to practice kangaroo mother care, which is known as a skin-to-skin method for premature babies.

Our division just moved to a new place in the new building on August 16. The new place is not only bigger and brighter than the old one, but it also has 16 mother-and baby wards, which we call “family wards.” In the family wards, parents or other family members can accompany an ill baby. Massive research shows that a mother staying together with their baby is a better for babies.