How to savor authentic Singapore cuisine

To many foreigners, one Chinese cuisine is like the next. That’s a misconception. Regional versions are quite different. What you might eat in a typical Shanghai restaurant is not what you would be eating in a city like Singapore.

Beef rendang, curry mutton, Hainanese chicken rice, bak kut teh (pork rib in broth). An array of names of dishes covers the window of a restaurant on Huanghua Road in Minhang District. Yes, it is an authentic Singapore restaurant. What’s more, it was the first of its kind in Shanghai, possibly even in China. 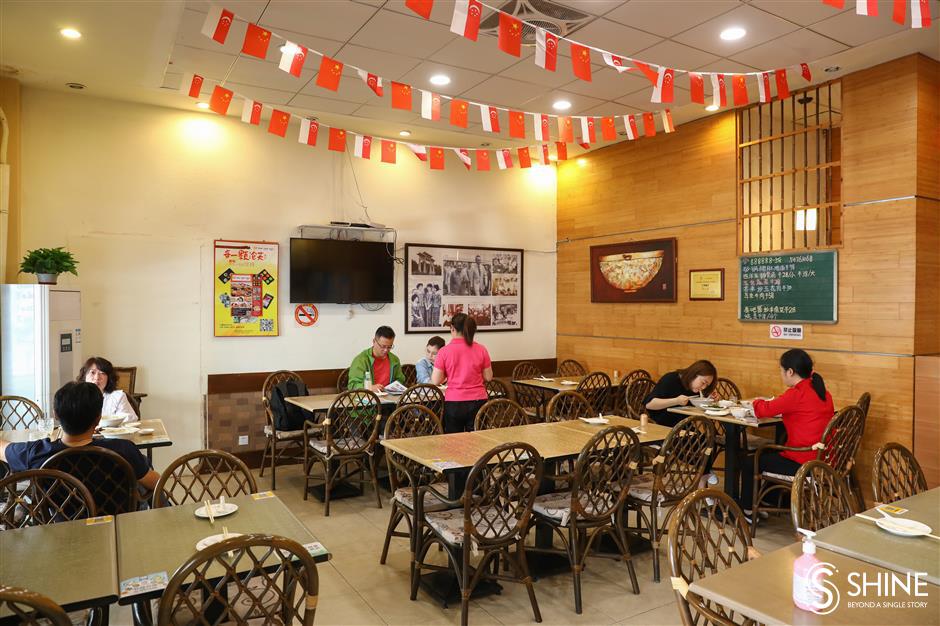 Frankie’s Place in Minhang District provides a simple and comfy ambience to sample the true taste of Singapore.

It is 11 in the morning. Frankie Ong, 73, owner of the restaurant, is reading a newspaper while drinking his usual morning coffee.

“This is a typical Singaporean coffee cup, which has thick walls and is patterned with the classic flowers,” Ong tells me. “The demitasse-sized cup needs to be pre-heated with a swirl of boiled water before the coffee is poured from a height.”

This gourmet expat has run the restaurant for over 25 years. Named Frankie’s Place today, it was originally called Cinta Manis — Malayan for “sweet love.”

“Many patrons told me that the Malay name was hard to remember so I changed the name,” says Ong. “But still, the place is full of true love.”

Moving to Shanghai in 1988, Ong first worked at a Japanese construction firm in charge of safety management for construction of the Shanghai Center on Nanjing Road W.

“I arrived in Shanghai on March 2, 1988. I clearly remember the date,” says Ong. “Unlike Singapore, which is called the ‘garden city,’ I could hardly see any green when I disembarked at Hongqiao Airport. Besides, the weather was freezing. I bought the first coat in my life in Shanghai.”

According to Ong, two factors drove him to move to Shanghai. One was that his uncle, who took care of him when he was a child and he hadn’t seen in decades, was living here. The other reason was a curiosity about China.

Ong has witnessed the dramatic development of the city. In his early days here, a foreigner like him could purchase things only at the Shanghai Friendship Store by using foreign-exchange certificates.

Trying to blend in with the locals, he said he once rode his Forever-brand bike to Xiangyang Road to buy traditional youtiao, or Chinese fried sticks, and dabing, or flat bread. But the ration coupons in the old era of China’s planned economy allowed him only to feast his eyes rather than satisfy his appetite.

Ong was also impressed by the public telephone booths that were all the rage in the 1990s.

“The booths were often located at the gates of neighborhoods,” says Ong. “Workers used megaphones to let residents know they had a phone call. It was very interesting.”

He ate at the work canteen on weekdays, but on weekends Ong and fellow Singaporean expats got together to prepare hometown dishes in the dormitory. It is a memory he still cherishes.

The food they cooked was not purely authentic because they couldn’t find all the necessary ingredients, but the seed of opening a Singapore restaurant was sown in Ong’s mind.

After working at an American company for two years, Ong faced a choice: stay in Shanghai or return to Singapore. Seeing the endless possibilities in such a rapidly changing city, he chose to remain. However, at that time, most companies weren’t hiring foreigners, so Ong decided to open a restaurant, along with several local friends. 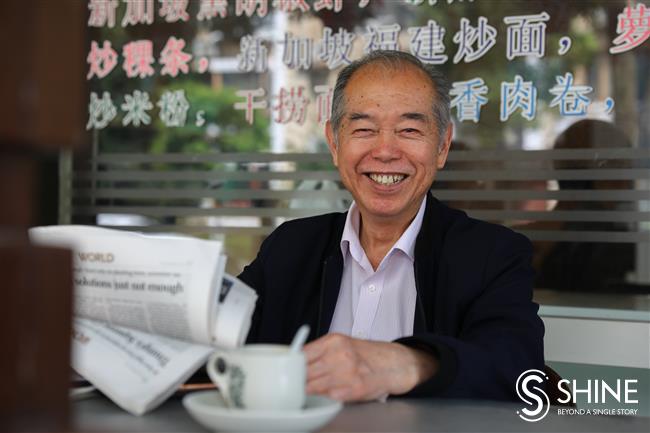 Established in late 1994, Ong’s restaurant was originally hidden in a lane near Nanjing Road W. After four relocations due to urban renewal, the restaurant finally nestled in its current location in 2004.

Worried that patrons might have trouble reaching him, Ong still uses his old telephone number from the 1990s.

“A few months ago, a woman came to my restaurant and asked me whether I remembered her,” says Ong. “She said she first visited the place when she was newly married and now her daughter was 15 years old.”

Remarking on loyal patrons, he added, “I also remember a French couple who previously worked in Shanghai. I witnessed them going from friendship to a relationship and then to marriage. They left for America two years ago and paid a special visit to my restaurant last year. They had already become parents of two children.”

During our conversation, Ong gets up to greet every customer entering the restaurant. As they leave, he asks them for feedback on the food.

He employs only one waitress and often serves tables himself. He jokingly calls himself “the oldest waiter in Shanghai.”

The ambience of his restaurant is simple but comfy. Durable rattan chairs, which cost 125 yuan (US$18) each, were handmade by a craftsman on Shanxi Road S. more than 15 years ago. Several old pictures hang on the wall. One features Deng Xiaoping, who was then vice premier of China, and Lee Kuan Yew, former prime minister of Singapore, when Deng paid an official visit to Singapore in November 1978.

“It was an important moment,” says Ong. “The visit showed Deng the significance of foreign direct investment. As China’s market opened up to the outside world, more foreigners like me gravitated to the country.”

“I grew up watching my mother and grandmother cook delicious food in our kitchen,” says Ong. “Our neighbors ran street food businesses. I often helped them do meal prep when I was a child.” 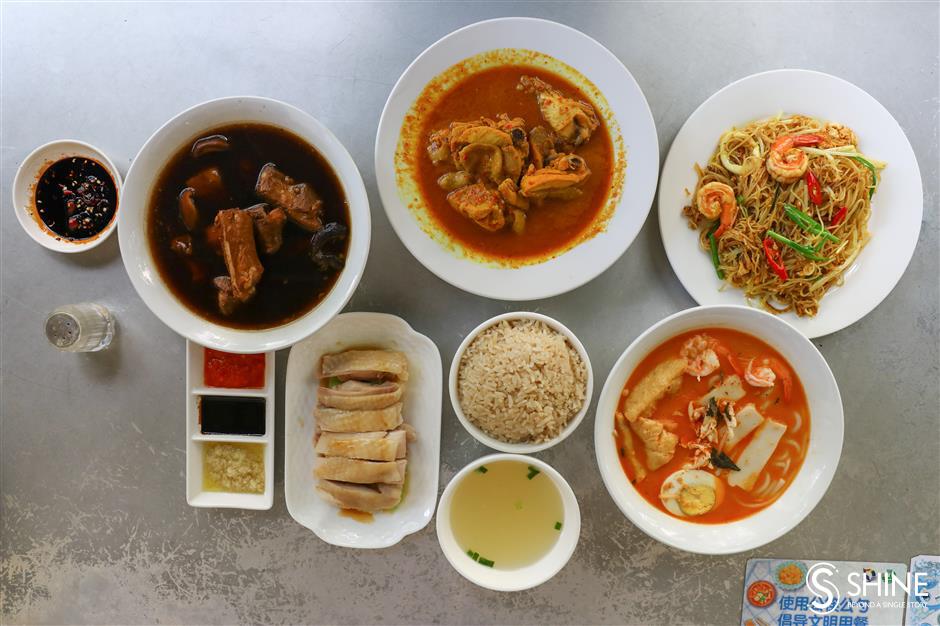 Unique ingredients and spices give Singapore cuisine a distinctive taste.

Turmeric, candlenuts, sambal belacan (a Malaysian condiment made with fresh red chilies, lime juice, salt and sugar) and other exotic ingredients and spices deliver authentic Singaporean flavors. At the very beginning, not all ingredients were available in China and had to be carried in by what Ong calls his “little army of ants” — friends from Singapore. Finding the right ingredients is no longer a problem.

When I am about to leave, it is almost two in the afternoon. Ong waits for friends to arrive for a coffee party.

“The place is like a non-membership club,” says Ong. “Many customers become my good friends after dining here a few times. They are the reason that I keep the restaurant open.”