When finance professional Mei Yee Lim purchased a property in the new Cullinan West development in Nam Cheong, Hong Kong, she decided to go for amenities over square footage.

Lim, now in her 30s, used to live alone in a roomy two-bedroom apartment, but she decided to give it up in 2019 for a 33-square-meter oasis off West Kowloon that boasts ample sports and leisure facilities.

Lim chose Clifton Leung Design Workshop over other design firms to recreate her home because they understood the space well and had the right design for her needs, both aesthetically and functionally.

“I came across Clifton Leung whilst searching for an interior design for my tiny flat. I was downgrading from a two bedroom to a one bedroom so I needed to maximize the storage space without suffocating the flat,” she said. 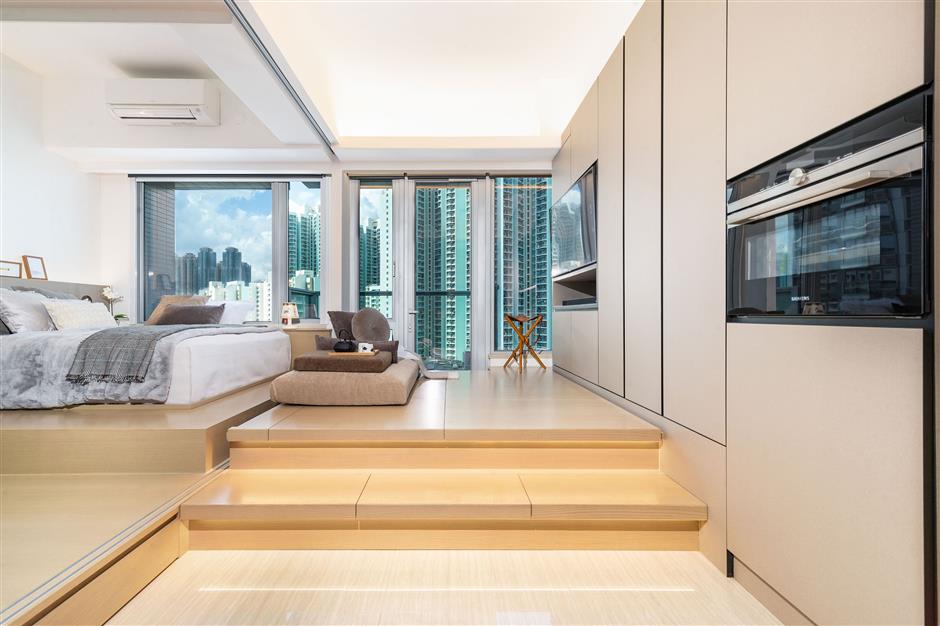 The platform, the apartment’s defining feature, solves several design problems at once.

Lim’s briefs were clear: a catering space for when guests stay-over, while not sacrificing her own private areas; flexible seating for guests during gatherings; extra storage space for cooking utensils and a fair amount of clothes and accessories. And as she loves to cook for her friends, Lim needed a good oven in the kitchen.

It is probably the smallest flat Clifton Leung has ever done.

The apartment originally comprised a living room/kitchen and a bedroom, with a wall in between the living room and bedroom.

“I knew right at the beginning that we had to do something about that wall, because the space is so limited,” Leung said.

“We had to join hands to create a bigger usable space for her to entertain her friends and cater a flexible seating arrangement. So, we removed the wall between the living room and bedroom and created an open space which ushered in more light.”

The minute the designer saw the flat, he knew the client would need a lot of storage.

Lim initially had an idea of a loft bed with closed storage underneath to resolve this issue. 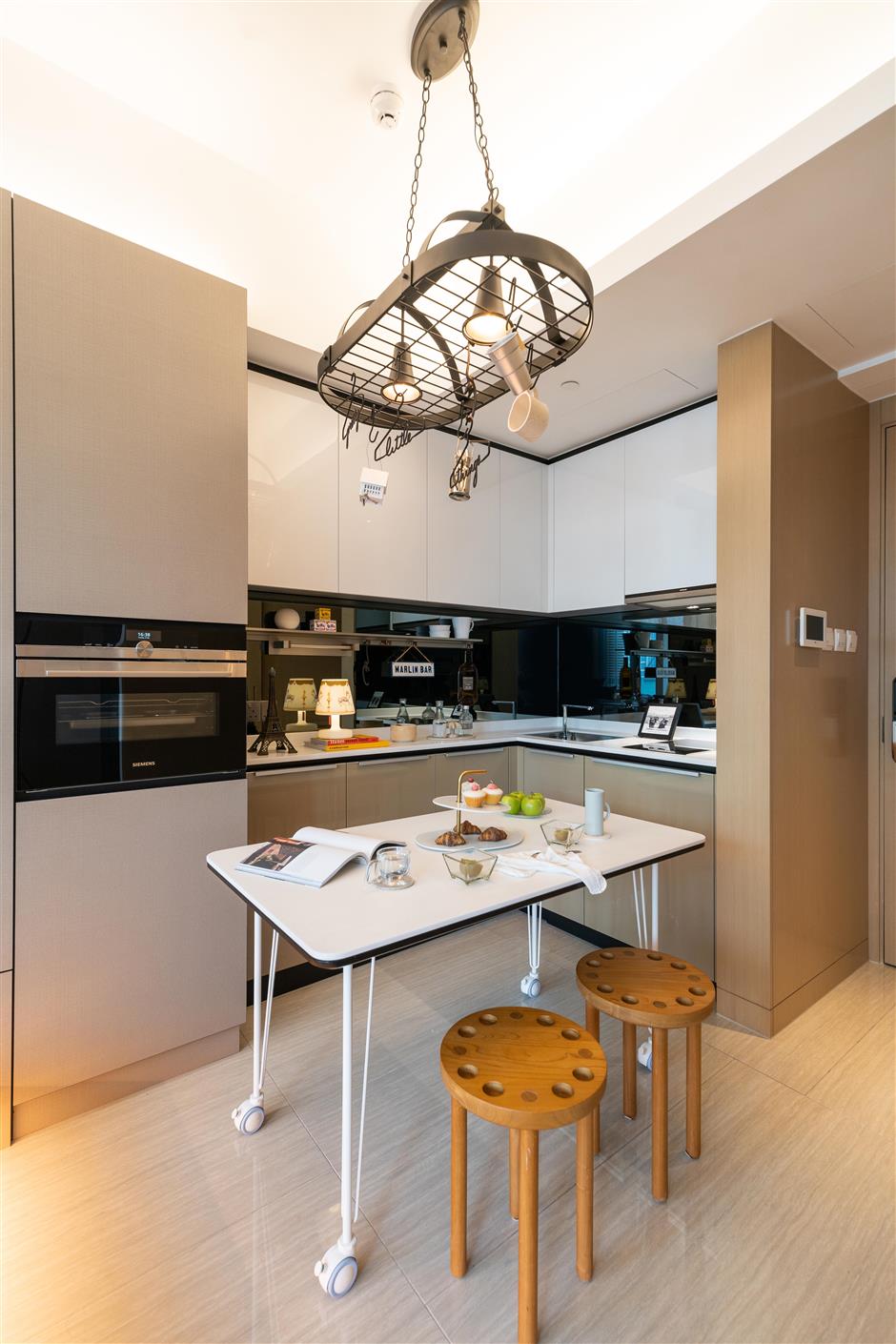 To extend the kitchen’s narrow counter­tops, a custom-built stand-alone Corian table on wheels is introduced.

“However, we thought that it would block the window and natural light. Furthermore, she cannot enjoy the high ceiling with a loft bed, so I suggested a platform bed,” the designer said.

Hong Kong has a hectic working environment, so when it came to choosing a design scheme for the flat, a modern Balinese-style was Leung’s first choice.

Lim loves to entertain, but doesn’t like to have a lot of chairs in the kitchen/dining areas. With that in mind the steps were designed as a raised platform, which has combo functions: storage and seating — a two-in-one solution.

A flexible and fun modular sofa was chosen instead of a regular sofa, because it has greater flexibility in seating arrangements.

The major highlight of the apartment is the platform. It resolves several design problems at once. Visually, the podium adds dimension and elevation and makes the room more interesting, while the steps create additional seating without a clutter of extra chairs.

On the window side, the platform offers a comfortable perch from which to enjoy the small balcony without going outside. But the platform’s most vital role is what it conceals. Storage bays are tucked underneath the platform stairs, which open as pullout drawers. Levers under the Tatami-style sofa allow the sofa to be pulled up for access to storage spaces below. 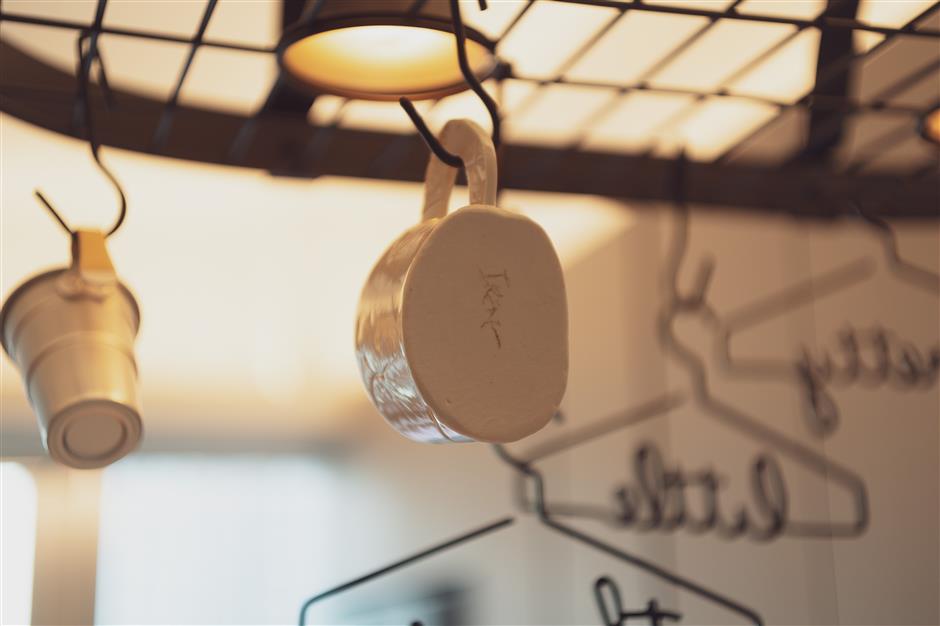 Clifton Leung Design Workshop designed the pot rack hanging over an island, putting the typically underutilized space to good use.

Under the bed, a deeper alcove, great for suitcases, opens via a remote control.

“We also built a large set of linking drawers under the sliding wooden doors that flank the kitchen. We call them ‘the trolley’ because the storage compartments are hitched together like train carriages,” Leung said.

“Another highlight is the versatility of enjoying the flat,” he said.

“When the owner is home alone, she uses the space like a studio apartment, but when she has guests the bed is closed off from view.

“To facilitate this, we built large sliding doors (originally a wall) to partition the bedroom and entertaining spaces. And on the side that faces the bathroom corridor we installed a curtain.”

A hanging rack was installed to display cooking utensils, which the designer turned into a playful chandelier. It adds to the hospitable vibe.

Custom-building extended the kitchen’s narrow countertops so Lim has a stand-alone Corian table on wheels.

Overall, the abode’s balance of materials and palette of light grey, wood and white tones evokes a sense of calm.

The designer wanted to create a smooth texture.

It’s a small space so he wanted comfortable tones, a Zen feel, and he didn’t want to waste any material. 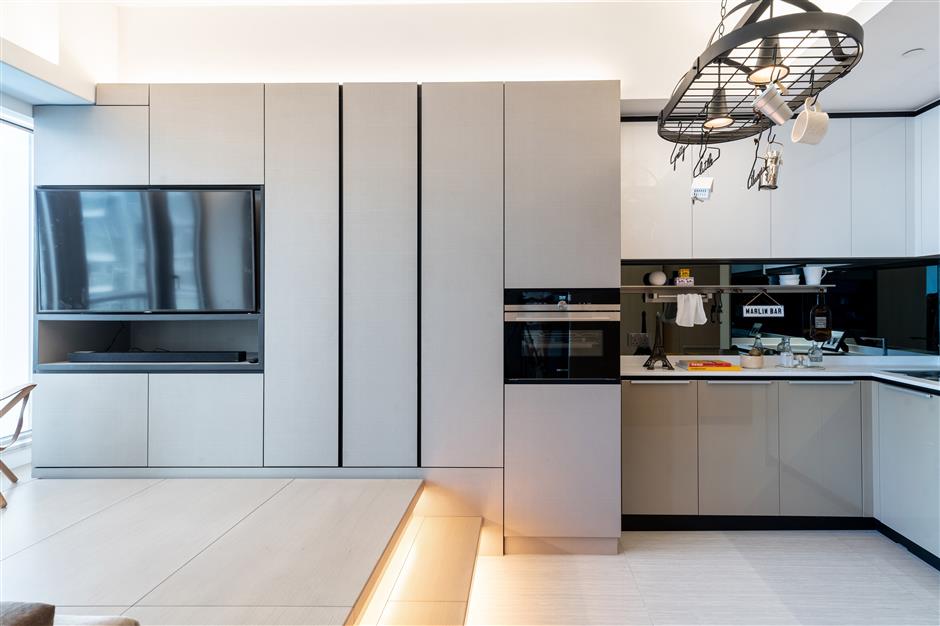 The apartment’s overall balance of materials and palette of light grey, wood and white tones evokes a sense of calm.

“We simply painted the walls white and this will make the space last over time,” Leung said.

“Adding warmth was important too, so we chose wood for the floors and sliding doors, and avoided bright overhead lamps in favor of recessed and inset lighting.

“The warm glow created by the custom lights is one of Lim’s favorite features.”

“I love sitting on the platform if I’m home just chilling out. I turn on the rack lamp and platform lights, and this creates a nice mood,” Lim said.

The entire platform is integrated with a LED feature at the steps to create lighting mood to entertain guests at dinner parties.

The design took about a month while  the construction took around three and a half months.

“You have to figure out all of these detailed solutions for every inch of space. You need to be a little bit more creative, one function is not enough, two or more functions in one space is essential.”