Baimaquzong’s hometown — Tibetan Autonomous Prefecture of Deqen in Yunnan Province — lies at an altitude of 4,270 meters and is surrounded by mountains. Reaching the nearest village may require crossing mountains, while driving is dangerous because the roadways are narrow and on the edge of cliffs.

Little wonder that Baimaquzong thought her life would be confined to this mountainous area. But to her surprise she got the opportunity to work in Jiading through the Jiading-Yunnan poverty-alleviation project, which turned her life upside down “like the first bend of the Yangtze River near my home,” she said.

Now having worked as a drill bit processor in Jiading for two years, she can earn double that of her family in Deqen.

“My hometown is an impoverished village in a poverty-stricken county, so the monthly income is low. My parents grow wheat, corn, highland barley and rear livestock, but only enough for ourselves instead of selling surplus food on the market to earn more money. My dad will dig Chinese caterpillar fungus in spring and pick matsutake mushrooms in summer to subsidize the family,” Baimaquzong said. 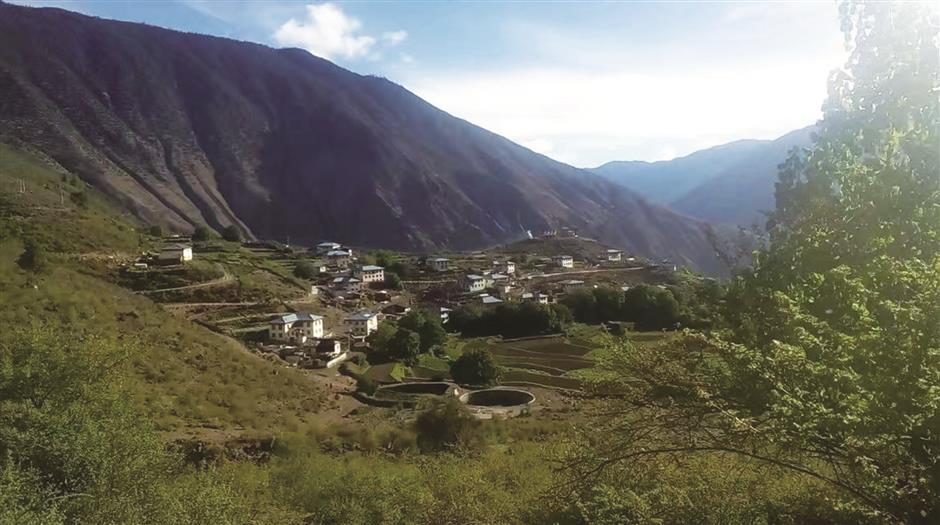 A bird’s-eye view of Deqen County, Baimaquzong’s hometown, which lies at an altitude of 4,270 meters, is surrounded by mountains.

After graduating from high school, she gave up the chance of furthering her studies in a junior college but started to grow maca, a plant used in traditional Chinese medicine, in Diqing for six months to make some money for the family. However, as fewer people ate the plant, the endeavor wasn’t ideal. So she decided to go to bigger cities for better opportunities.

Her father didn’t approve of that idea, saying that, as a girl, she had to stay within at least Diqing County for safety’s sake. As a result, Baimaquzong found a job in the neighboring village, cooking for teachers in an elementary school.

“Although it wasn’t a decent job, I learnt how to cook which was one of the life skills, proving that I could live on my own without the help of my parents. My father was satisfied with my performance and allowed me to work outside Diqing,” she said.

The chance came in 2017, when her older brother, who works in the county government, brought news of the Shanghai-Diqing poverty-alleviation project. She had all the qualifications.

“I always wanted to see the different scenery outside this rural mountainous area so I made up my mind immediately that I would enter for the project,” she said. “My family wasn’t rich and borrowed money from relatives and friends to cure my father’s disease. In addition, my brother needed money to pay his student loan back.”

Baimaquzong resigned from her job and took her first flight to Shanghai, more than 3,000 kilometers from her hometown.

She didn’t know a lot about the city and thought it would be similar to Kunming, Yunnan’s capital city.

Indeed, she felt the environment was familiar when the plane landed.“Usually, when we first arrive in a strange place, we will feel tense because everything is new, but I didn’t have the feeling at all,” she recalled.

However, there were some obstacles.

First was the language. In Deqen, people speak local dialect rather than Mandarin. When she took a taxi in Shanghai, she could understand what the driver meant, but he found it hard to figure out what she was saying even though she was speaking “Mandarin.”

After realizing the importance of the language, she tried hard to communicate with more people in Mandarin.

Practice makes perfect and now she can communicate in Mandarin with ease.

Then, there was the difference in altitude, as Shanghai is much lower than where she lived in Yunnan, which made her feel sleepy every day. It took her almost two months to adapt to her new environment.

When she went to a job fair for those who came through the project, it was hard for her to get one.

Luckily, with the help of a Jiading official of the project, she was accepted by a Taiwan company, giving her the chance to stay in the city.

The company she works for in the Madong Industrial Park in Malu Town is engaged in making drill bits and metal cutters, and Baimaquzong had to put raw materials into a machine and collect them after they had been turned into drill bits.

After three months, she could produce 1,900 drill bits a day, close to that of a skilled worker. 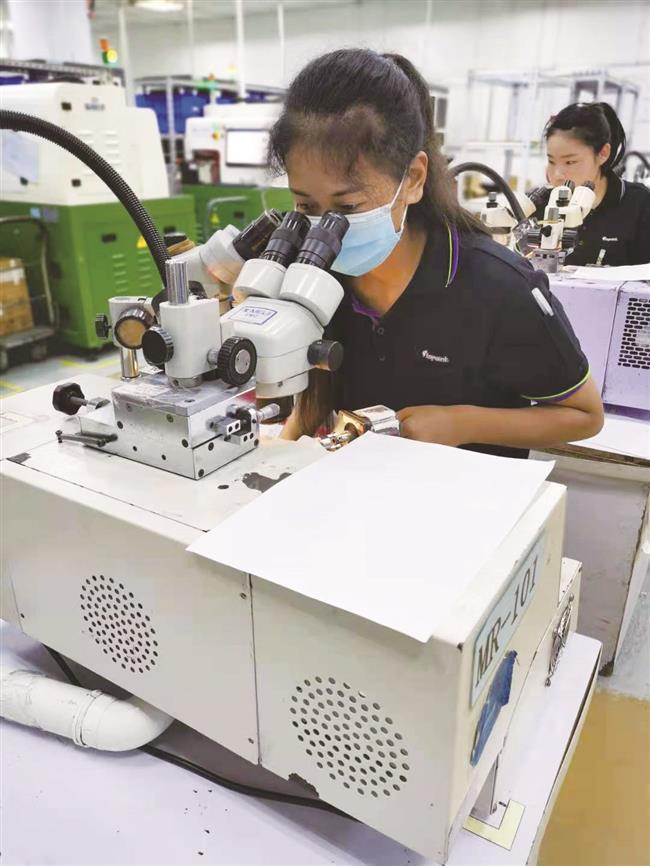 Baimaquzong works as a drill bit processor in Jiading.

“My brother’s loan has been paid off with some contribution from my salary. The burden of my parents had been released, and I felt relieved too,” she said.

The company provided a free apartment for those involved in the poverty-alleviation project, including Baimaquzong. She lives just 15 minutes from her work.

She traveled to Hangzhou in neighboring Zhejiang Province for the first time with her roommates during the Labor Day holiday last year. She also visited Kunshan in neighboring Jiangsu Province and Guangzhou in southern China’s Guangdong Province during business trips.

In her spare time, she likes to go for walks.

“Maybe it is because I was born in mountainous regions, I prefer to wander on streets even if I have no destination when I have a day off, just to get a feeling of the environment of this city,” she said.

During her years in Jiading, her hometown has changed a lot. Thanks to poverty-assistance projects between Jiading and Deqen, the title of “impoverished county” was removed last year.

Baimaquzong tries to promote the project to those willing to leave the mountains and work in cities.

One time when she went back to her hometown for Spring Festival, she was told that a close neighbor wanted to participate in the project, but his family had objected.

Baimaquzong talked with the family, telling them of the benefits and stories of her life in Shanghai. The boy’s father finally agreed with his son.

Baimaquzong is always ready to leave her comfort zone. For example, she would be the first to enter for a position when the company’s factories in other cities lacked workers.

As a result, she has worked in Jiangsu and Anhui provinces and Chongqing.

She said she wanted to look around and learn more. That’s why she spent a month’s salary to study Japanese.

“Language skills are useful, and maybe it can help me in the future,” she said.

As one of the beneficiaries of the poverty-assistance project, Baimaquzong expressed her appreciation for Jiading’s helping hand. She wishes more people will get involved, working hard in the major cities and helping to improve conditions in their hometowns.

The district has established a long-term labor cooperation project to help those who live in these regions eliminate poverty through connecting schools and companies, providing vocational training and holding job fairs. It is estimated that more than 5,000 people in rural areas have been benefited from these projects.