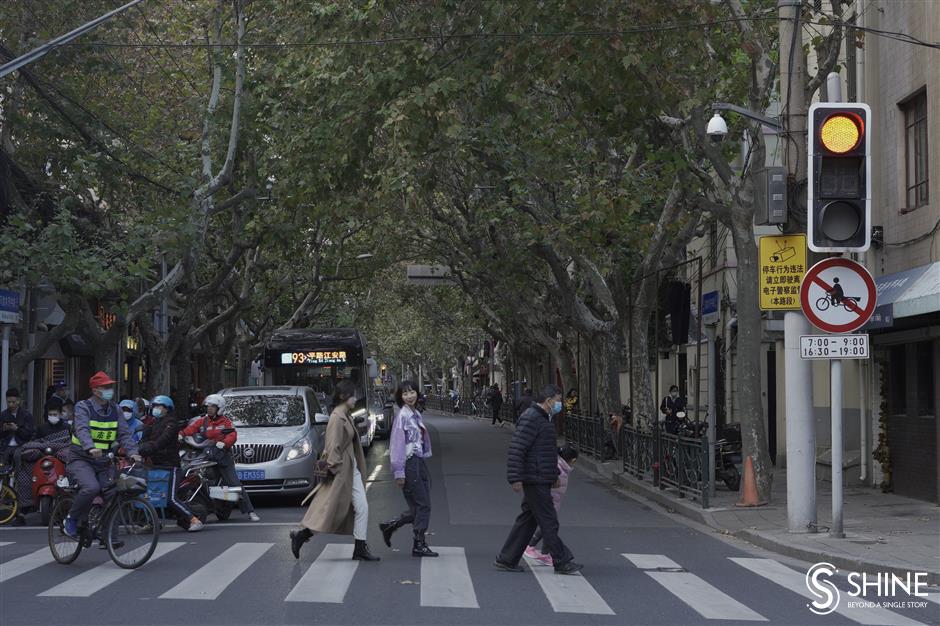 Fiona Li (central right) and Shirlene Gu (central left) walk across a road with an awesome view of plane trees.

The city’s plane trees have taken on a splash of seasonal color, with their golden leaves reminiscent of Shanghai in the 1930s.

This is a typical street scene in the Hengfu (Hengshan-Fuxing Road) Historical and Cultural Area. The area is well known for its historical houses, several of them now turned into museums, allowing visitors to discover the legends that originated there.

Shanghai Daily reporters took a one-day break in an apartment with an awesome view of plane trees from its balcony and checked out the museums. This is the best season to take a trip to the Hengfu Historic and Cultural Area in Xuhui District. The colorful streetscapes created by fallen leaves in the area will last till the end of the year. The Hengfu Exhibition Hall at 62 Fuxing Road W. is open to the public and offers a glimpse into the history and culture of the area, with its heritage-listed buildings.

The Spanish garden villa was known as The Cloister Apartments in the 1930s and served as the residence of US businessman Chester Flitz and his socialite wife. Many original features of the two-story structure — balconies, fountains and mosaic floors — have been preserved. Famous guests included Soong Mei-ling (1898-2003), wife of Chiang Kai-shek (1887-1975), Kuomintang General Zhang Xueliang (1901-2001) and Peking Opera master Mei Lanfang (1894-1961).

The exhibition hall has details of 138 historical buildings and more than 20,000 archival documents showing the fusion of Chinese and Western cultures in this area over the past century: Historical newspapers and magazines, maps, real estate documents, personal notes and social investigation materials are on display, including a biography of Flitz.

As a highlight, there is an interactive screen in the exhibition hall where you can see the details of historical buildings in this area, such as the former residences of author Ba Jin, with even the letters on his desk seen clearly. When you step in, don’t miss the map on the wall, it shows the Hengfu area in the 1930s. You are welcome to put a note on the map to mark your address.

If you want to further discover this area, go to the reception desk and get the “Discover Shanghai under the Plane Trees” guide.

Take it, then start your trip.

Info: The hall is open Wednesdays to Saturdays, from 10am to 4:30pm. Online reservation is required, as only 200 visitors are permitted each day. Residents can apply via the “Meili Hengfu” WeChat account.

A map pinned with a variety of tourists’ notes

The Former Residence of Ke Ling

Walking along Fuxing Rd W., you can’t miss the unique Spanish-style building at No. 147 with its red-tile sloping roof and yellow cement facade. The building looks like an independent garden house, but it has obvious apartment building features inside. Each flat has its own kitchen, toilet, bedroom and living room.

The building was built in 1933, and playwright Ke Ling (1909-2000) and his wife Chen Guorong lived in Room 203 for nearly half a century. The room still looks the same as when they left it 20 years ago. Ke Ling was learning English by himself in his 80s, and his textbooks are left on his desk, as if he was still living there.

Ke Ling’s stories can be found in the old furniture and his collections include a set of “24 Historics” books (dynastic histories from remote antiquity till the Ming Dynasty). The books were published in 1936.

Ke Ling conceived and created a large number of literary works. More than 130 boxes of books have been found in his room, as well as thousands of letters between Ke Ling and Qian Zhongshu, Yang Jiang, Xia Yan and other Chinese literary masters. The letters are displayed on the first floor, which is connected with the second floor by a narrow spiral staircase.

Info: The building is open Wednesdays to Saturdays, from 10am to 4:30pm. Online reservation is required, as only 200 visitors are permitted each day. Residents can apply via the “Meili Hengfu” WeChat account. The wooden gate of the Former Residence of Ke Ling

iDEALShanghai reporters walk on a staircase. 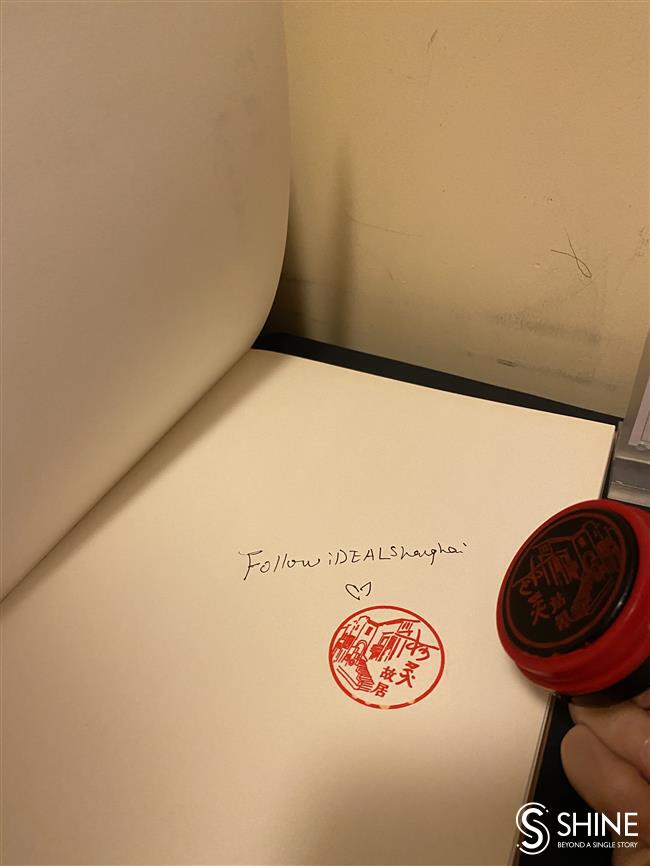 No. 3 Baoqing Road, which is more than 90 years old, is China’s first Symphonic Music Museum. Covering an area of nearly 5,000 square meters, there are five old Western-style houses, bringing an authentic 1930s garden view under the plane trees.

The villa once belonged to Zhou Zongliang, who was known as Shanghai’s “King of Dye” in the 1920s. Zhou’s grandson Xu Yuanzhang lived in the house from the 1950s until the early 2000s.

Most of the interior features remain, the wood floor, parapets, skirting, stairs, even the stained-glass windows are original. The wooden shutter doors and windows, and the mosaic tiles on the floor, have been restored to keep the original look of the villa.

Precious exhibits include the first Steinway piano used for a performance in China, the earliest known program for a symphony concert in the country, a vinyl record of “Beiping Hutong” by Shanghai Municipal Orchestra (predecessor to the Shanghai Symphony Orchestra) conducted by Italy’s Mario Paci in the 1920s, and the baton Chinese musician Huang Yijun used when conducting the Berlin Philharmonic in 1981.

The garden has been renovated in the German style as it was 100 years ago, with a geometric stone path on the grass and clumps of bushes. The garden is a hot attraction for photographers. If you want to take a panoramic view of the garden, the balcony on the second floor is the best place.

Info: Open Tuesdays to Saturdays, from 9:30am to 4:30pm. Online reservation is required, as only 40 visitors are permitted each day. Residents can apply via the “Dichan Baoqing” WeChat account. 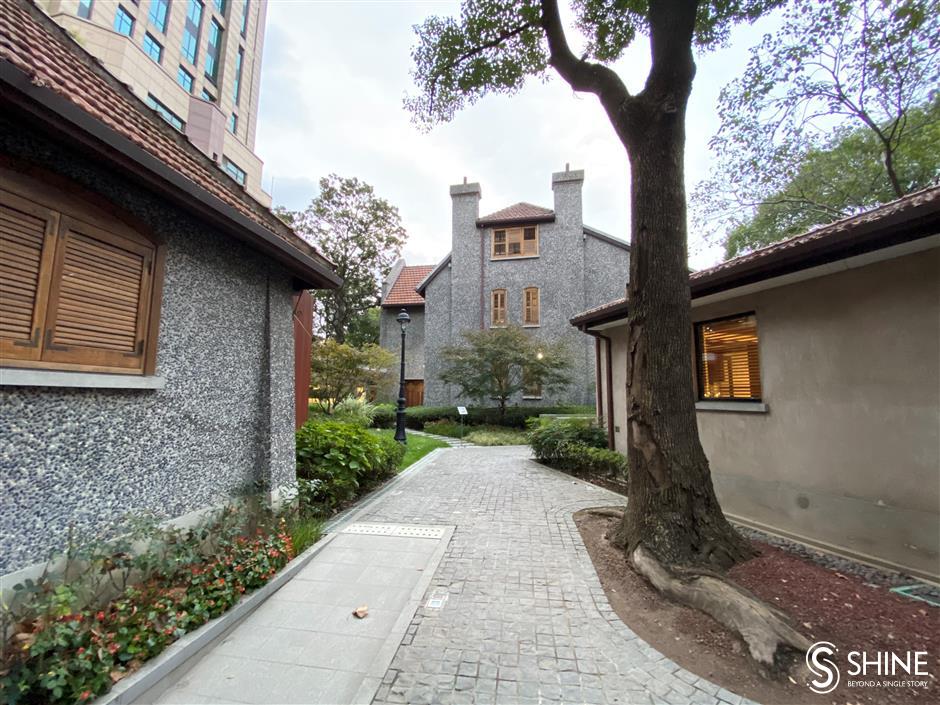 A glimpse of the museum

Fiona Li and Shirlene Gu stand at a balcony of the museum. 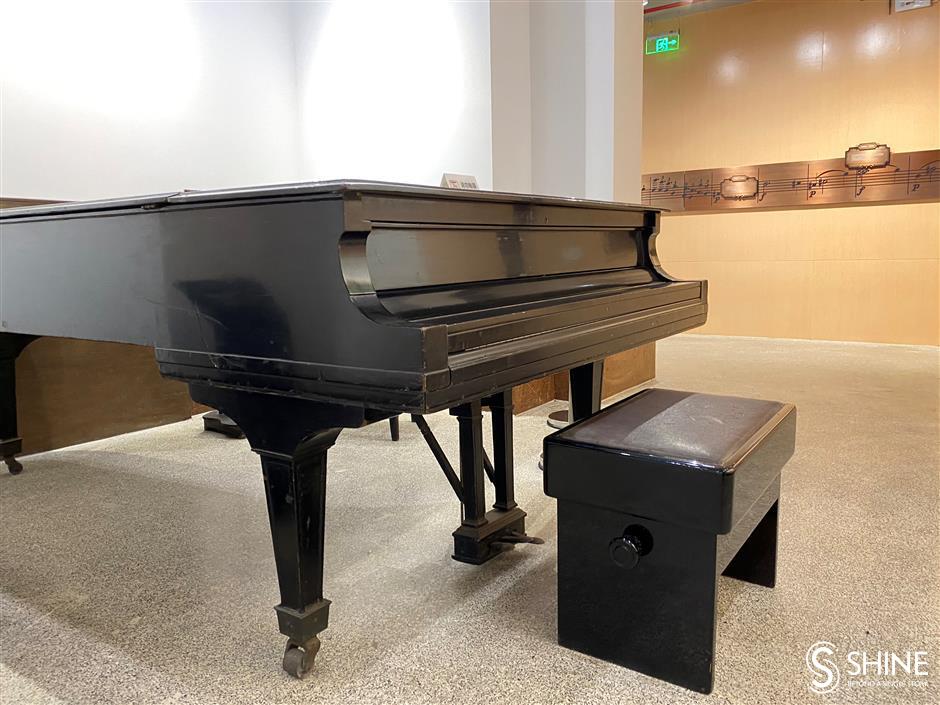 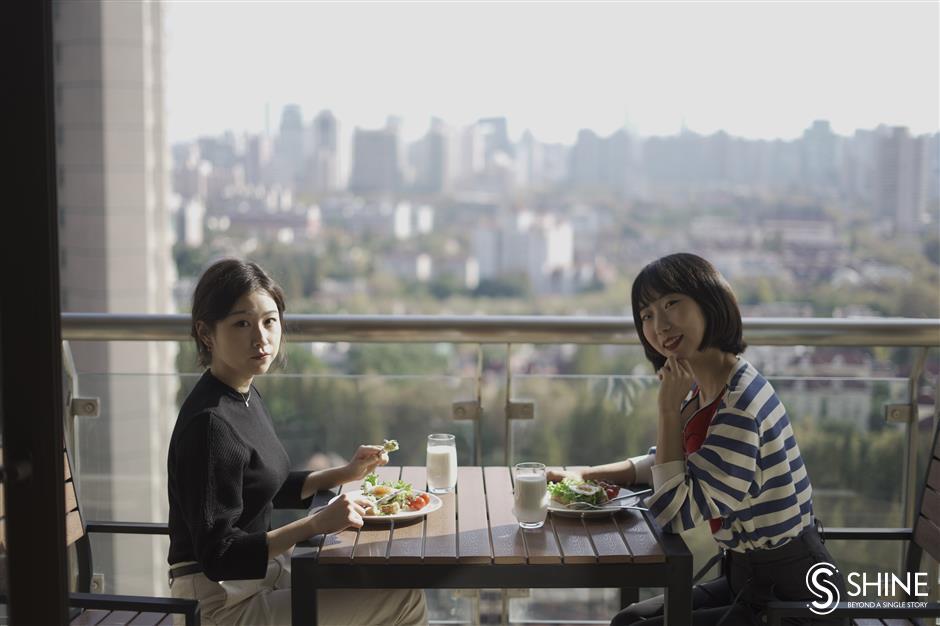 Fiona Li (right) and Shirlene Gu dine at a nearby restaurant.