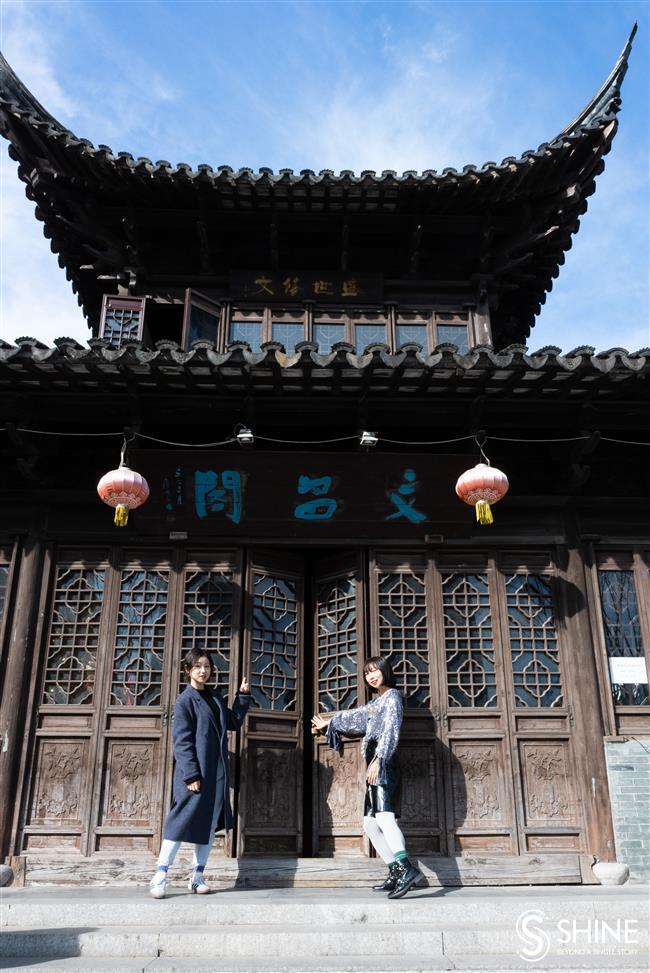 Fiona Li (right) and Shirlene Gu in front of the Wenchangge of the Confucian Temple in Sanlin old street.

The festive flavor of the 2021 Chinese Lunar New Year is ramping up on the old street. Residents come to the shops for their nianhuo (New Year’s goods). Sanlin roupi (fried pork skin) and Sanlin jiangcai (Shanghai style pickles), two of the intangible culture heritages of Sanlin, and important ingredients of Sanlin Benbang dishes (benbang means local), are most popular in the old street.

“This one is the most delicious.” Although she met the reporters for the first time, a local auntie made no stranger of them as she recommended jianggua. “The jianggua are all made of young cucumbers, pierce the skin before pickled, you can only buy the authentic ones here.”

A historic street always has a wenmiao (Confucian Temple). Sanlin old street’s Wenchangge hosts the studio for Zhang Zongxian’s Sanlin porcelain carving, another intangible culture heritage of the city, on its second floor. As the fourth-generation porcelain carver in his family, Zhang is glad to show his artworks and a selection of exquisite porcelain carvings are displayed on the first floor for visitors.

As a highlight, Sanlin’s dragon dance skill, known as the “Pudong dragon twist lantern,” was listed a national intangible cultural heritage in 2011. Beautiful dragons made of paper, silk and bamboo are held overhead, and appear to dance in the old street when Chinese festivals arrive.

It’s a traditional scene rarely seen nowadays. Beyond that, the miaohui (temple fair) is held every third lunar month with hundreds of traditional food and crafts stalls. Folk rituals are on show at the Lantern Festival, Mid-Autumn Festival, and fete of the town god.

The must-do list of Sanlin old street — visit the historic buildings, enjoy a Sanlin Dragon Dance performance and have a meal at Sanlin Benbang Restaurant. 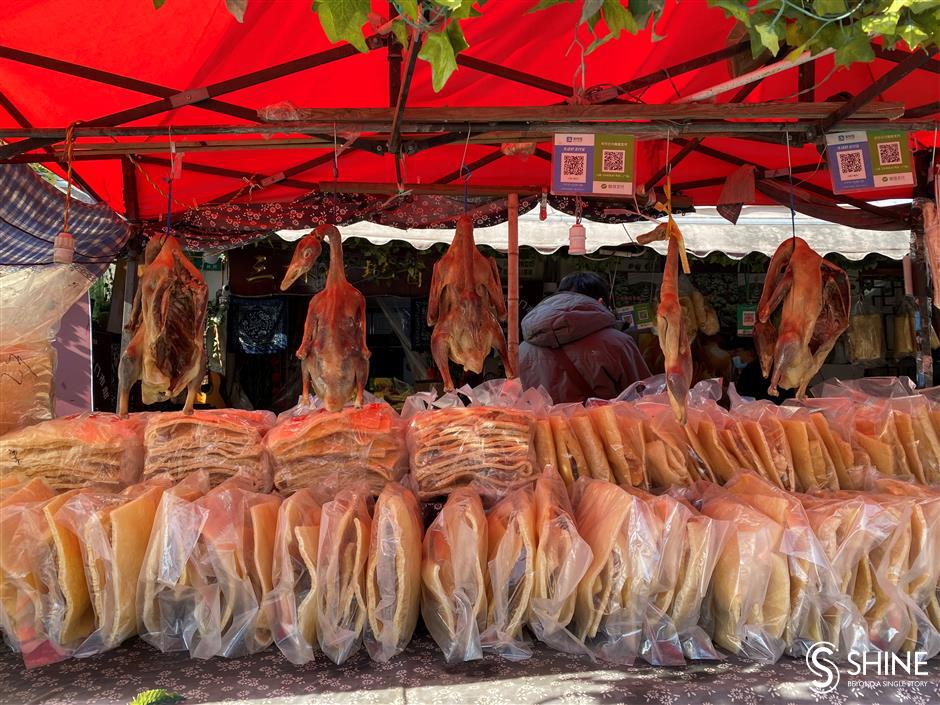 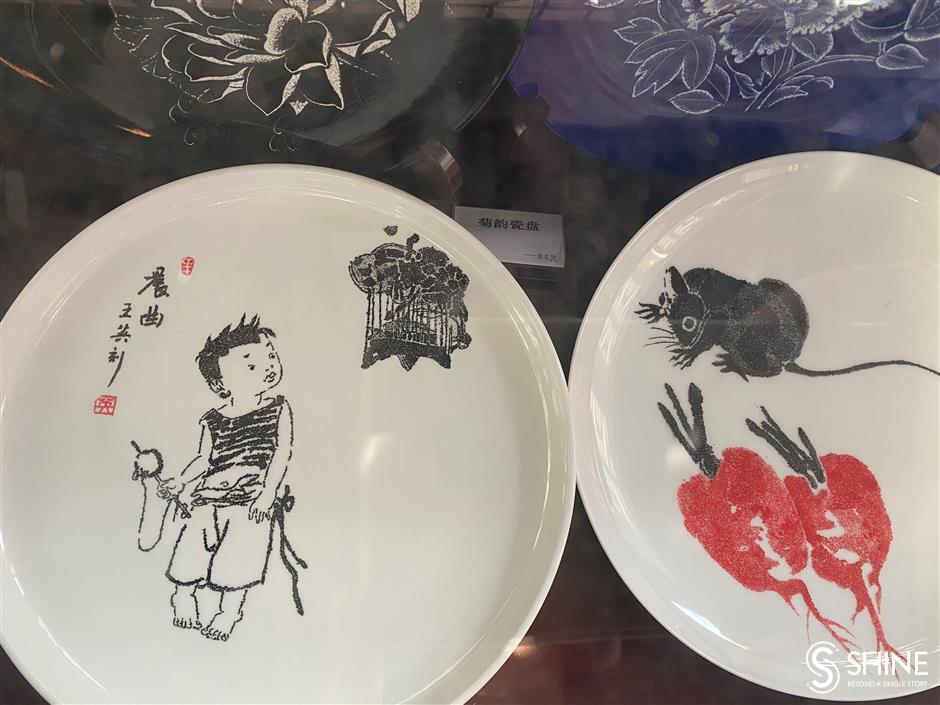 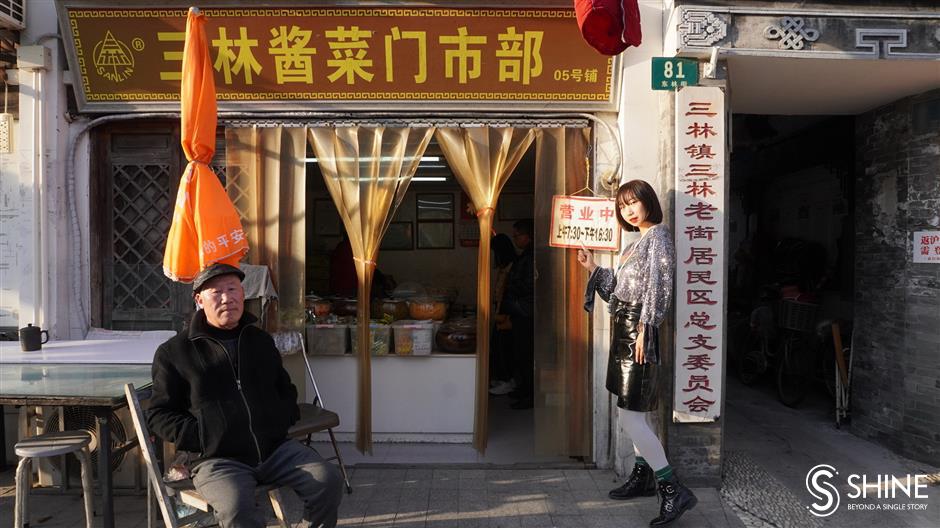 A restaurant offering genuine Shanghai cuisine, Sanlin Benbang Guan, is attracting new customers to the old street after it appeared in the second season of the CCTV’s documentary series A Bite of China.

Li Mingfu, owner and chef of Sanlin Benbang Guan, was renowned for his exquisite slice skills in making kousansi in the documentary.

Kousansi is one of the eight representative dishes of Sanlin cuisine, which was listed as an intangible heritage of the Pudong New Area in 2008. Li Mingfu was named as the heir.

The reporters met Li at his restaurant and he showed them how to present the dish.

“In the documentary, I used a small bowl for the slices. But now I change to a cup, to present a better shape of the dish,” Li said. “This dish demands skills and time. First slice the bamboo shoots, ham and chicken breast into slivers as thin as pieces of paper. Then cut these slices into small strands as fine as silk thread.”

It usually takes an hour for a chef to prepare the materials for a bowl of kousansi. The restaurant can only serve six dishes of kousansi a day, and diners have to order the dish in advance.

Steamed vigorously for 10 minutes. Li turned the cup upside-down on a serving plate and drenched the dish with a tasty chicken broth.

Stirring it up with chopsticks, the strands are dancing in the broth, making it a work of art.

“In my memory, my grandfather, Li Lingen, was cooking kousansi at Shanghai Dexing Guan restaurant when I was young, ” Li said.

His father, Li Borong, a national master chef, adapted cooking styles from across the country, making Sanlin cuisine the success it is.

Now, 65-year-old Li Mingfu is passing on his skills to his twin sons. However, he still helps to cook at busy times, but mostly he is in charge of finding the freshest ingredients.

“I get up at 4:30am every morning, to find the freshest river shrimps in the market for youbaoxia (Shanghai-style fried river shrimp),” he said.

Now a famous restaurant, it didn’t raise its prices. The menu is printed on simple pink paper, with the famous kousansi priced at 98 yuan (US$15). The other representative dishes of Sanlin cuisine, such as stewed flat bream in brown sauce and roupi with spring onion, are priced at around 30 yuan. 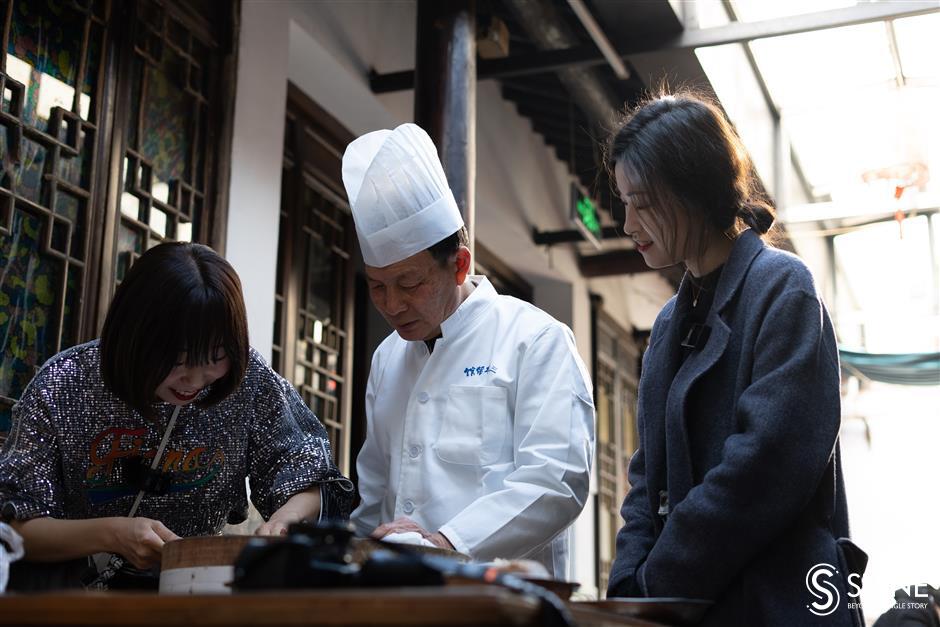 Li Mingfu (center), owner and chef of Sanlin Benbang Guan, is renowned for his exquisite slice skills in making kousansi. 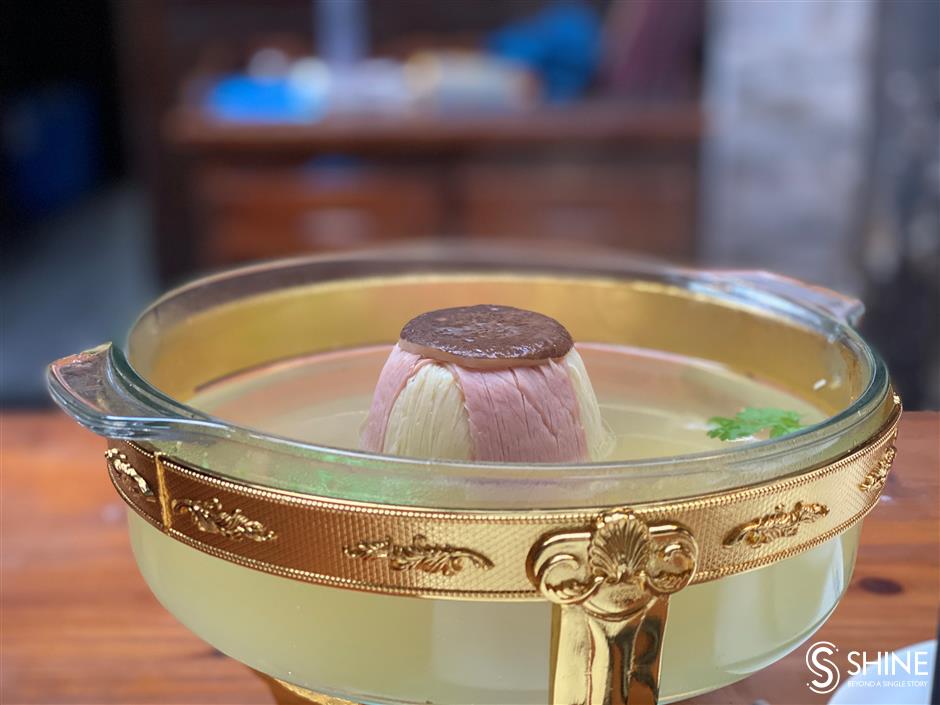 Dragon dance in the old street

With over 70 gold medals in competitions around the world, the Sanlin dragon dance team is the most famous. Sanlin town is known as “China’s Dragon and Lion Sports Town.”

The performance hall of the Sanlin team is one of the most eye-catching places in the old street. A large dragon head standing on a Chinese traditional style stage, the team flag flies alongside.

It’s where the team is based, a historic house in the center of Sanlin old street. As an exhibition hall of the Sanlin team, the house is open to public.

Lu Dajie, inheritor of the “Pudong dragon twist lantern” and head of the Sanlin team, invited the reporters to experience the dragon dance with his team members, and show them around the exhibition hall.

Lu integrated the dragon dance with the body language of dance art, the footwork of traditional opera and martial arts, making it renowned all over the world.

“There are different styles of the dragons, the most commonly used is a long dragon for nine players, and a short one for five players. The leader who plays the dragon head is the most important, the others need to follow him, so there is no routine for a dragon, it depends on the leader.” Lu said.

“For a beginner, 10 minutes is good. Actually it’s kind of sport, and there are competitions both in China and abroad,” Lu said. “We taught the elementary school students in Sanlin area as a physical education class, and we have experience classes for visitors.”

The exhibition hall displays the team’s medals and photos of their performances in Shanghai and abroad. “We’ve performed in a dozen nations and regions including France, Germany, Belgium, Japan and Cambodia,” Lu said.

The dragons are also displayed in the hall. “We make different dragons for different performances,” Lu said. “The most special one is a grass dragon, it is also a historic dragon style. It’s a tradition to perform it in summer, wearing vest and shorts.” 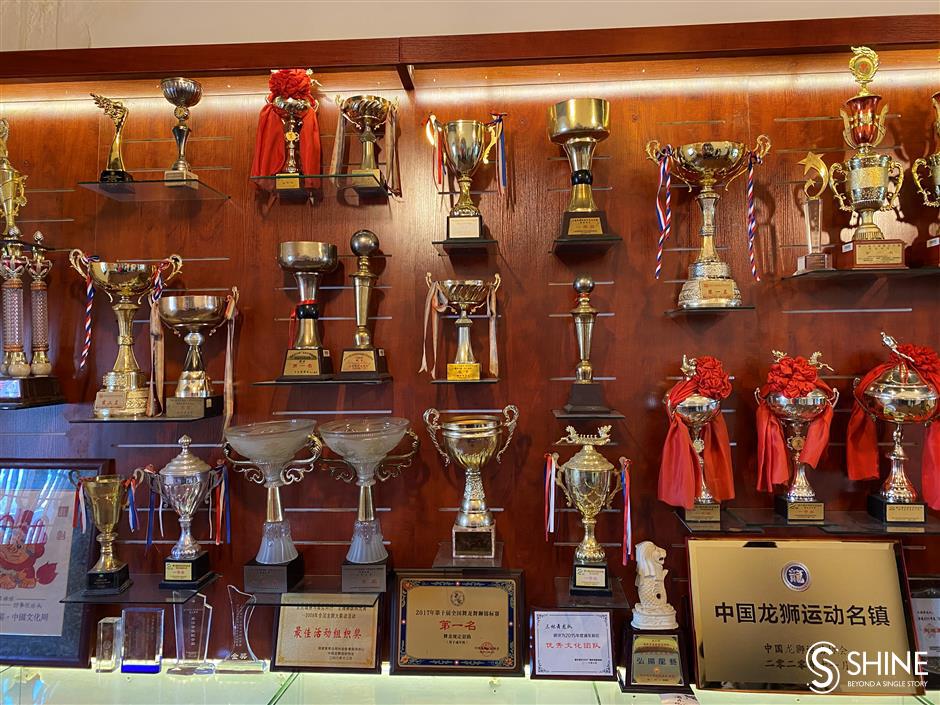 Medals and trophies the Sanlin dragon dance team has won are displayed at an exhibition hall. 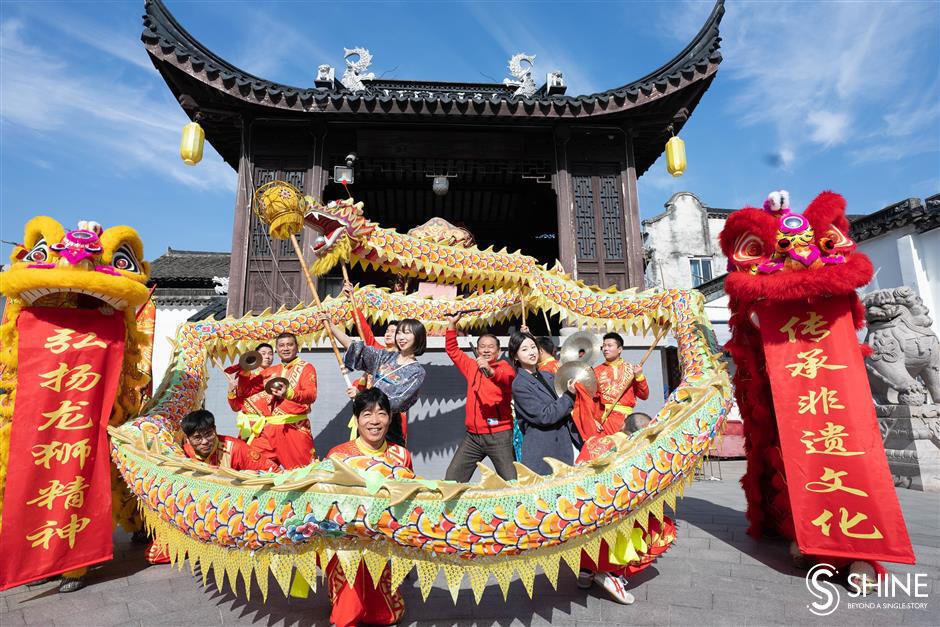