An unforgettable dining experience in Shanghai

China’s first restaurant that invited people suffering from Alzheimer's disease to be waiters and waitresses opened in the city on February 5.

The restaurant has already gained a large number of fans as the location of a popular reality television show “Forget Me Not Cafe," for which the unique restaurant was created to call attention to the plight of those with Alzheimer's. 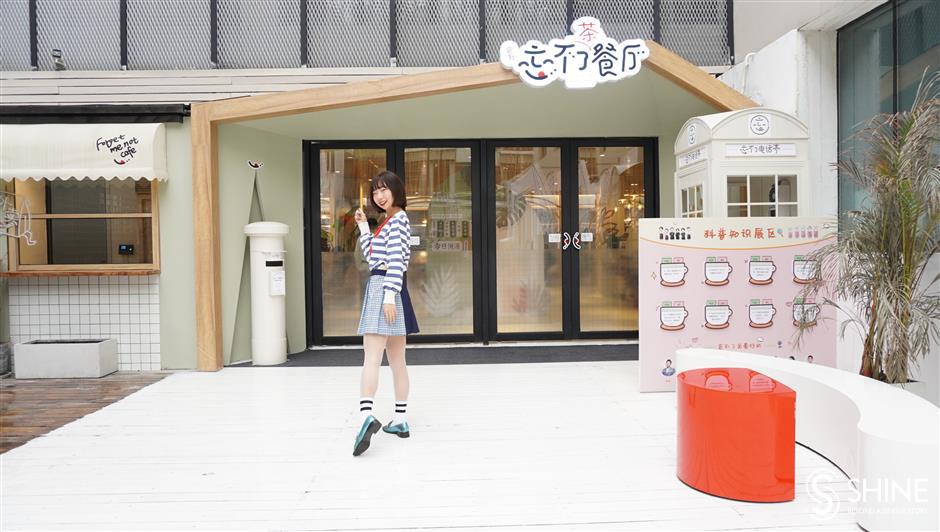 Fiona Li stands in front of Forget Me Not Cafe.

After the show ended, the restaurant carried on and opened to the public under the same name with some of the stars continuing as servers.

Fiona Li invited her friend Da Guai, a renowned Shanghai connoisseur, to check out the magic restaurant on the opening day. 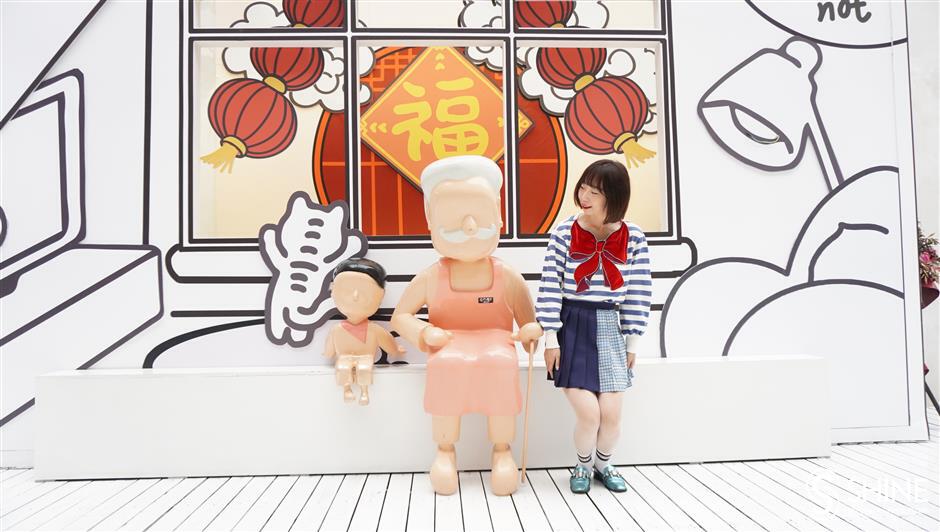 A setting for Chinese Lunar New Year outside of the restaurant

Located inside Yongjiating, the restaurant's theme is “forget me not," with special displays in the outdoor area, including an informational wall for guests to learn more about the disease, a mailbox for letters to the waiters and waitresses, a telephone booth with an interactive screen and a large graffiti wall featuring the staff. 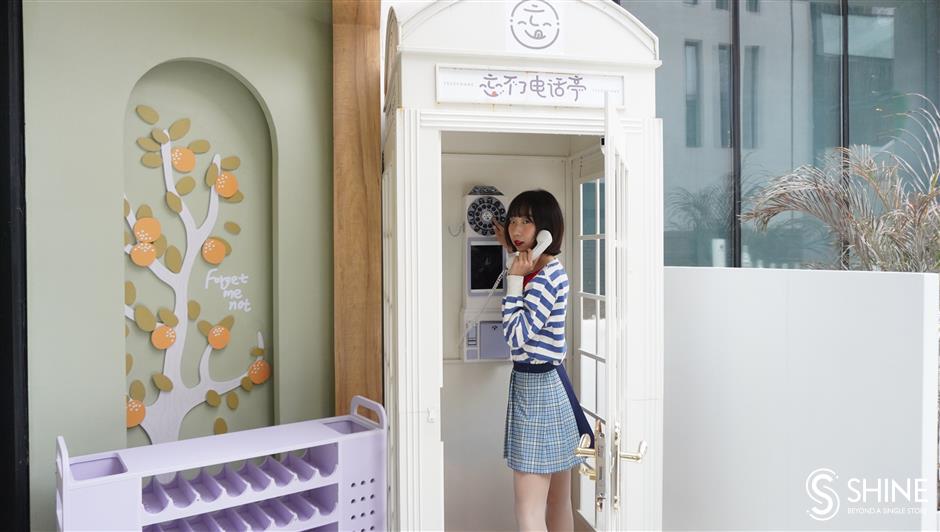 The theme extends to the interior decorations with photos of the servers in the TV show displayed on the wall, and a “memory capsule” where guests can put the records of their happy moments. 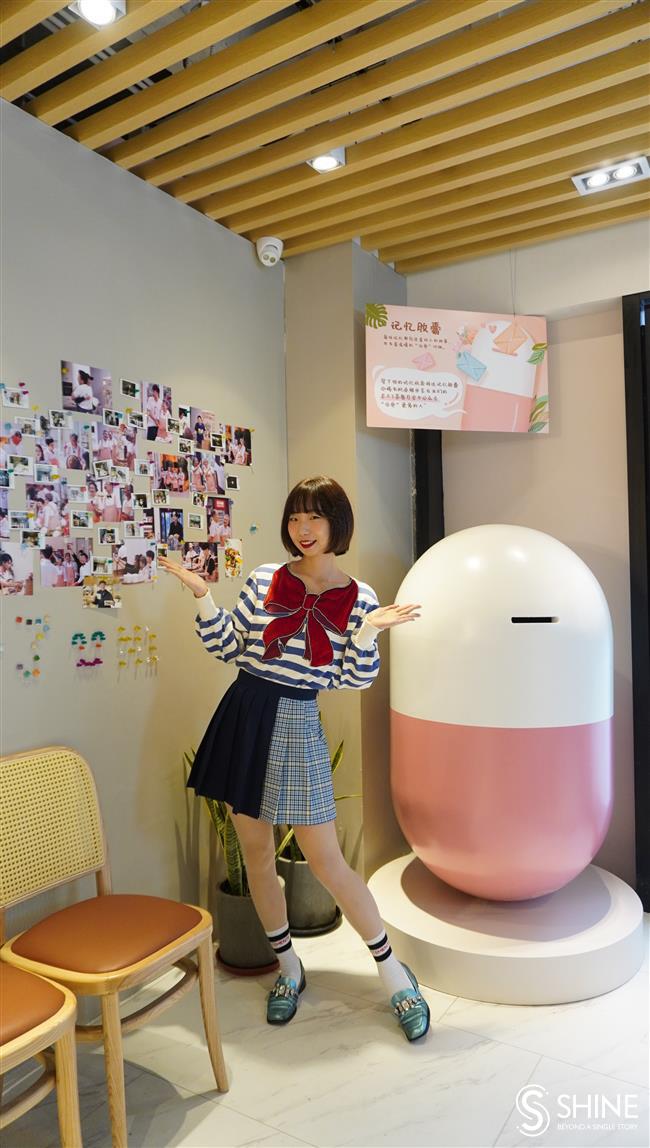 The photo wall and “memory capsule” 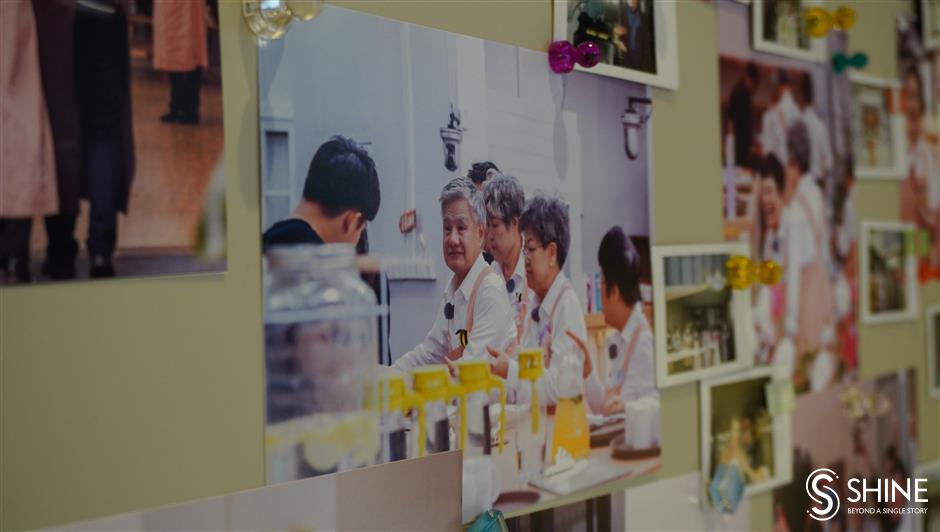 Photos of the servers in the TV show

Qin Ling, the restaurant owner, hopes to provide a good environment for people suffering from Alzheimer’s, and serve as a way for them to connect with people — which is believed to slow the disease's progression.

About 50 million people suffer from Alzheimer's globally, a figure expected to triple by 2050, according to the World Alzheimer Report 2018. In China, 10 million people live with Alzheimer’s, and the number could reach 40 million by 2050.

“We’ve recently invited six people with Alzheimer’s to be waiters and waitresses, all of whom are from a cooperative nursing home and hospital," Qin said. "Two or three of them will work in the restaurant at the same time. Their health conditions are monitored by the cooperative to ensure the work here is beneficial for them. There are full-time waiters to help them as assistants, making sure they’ve taken the correct order and reminding them to serve dishes. Also, each elderly must be accompanied by a family member." 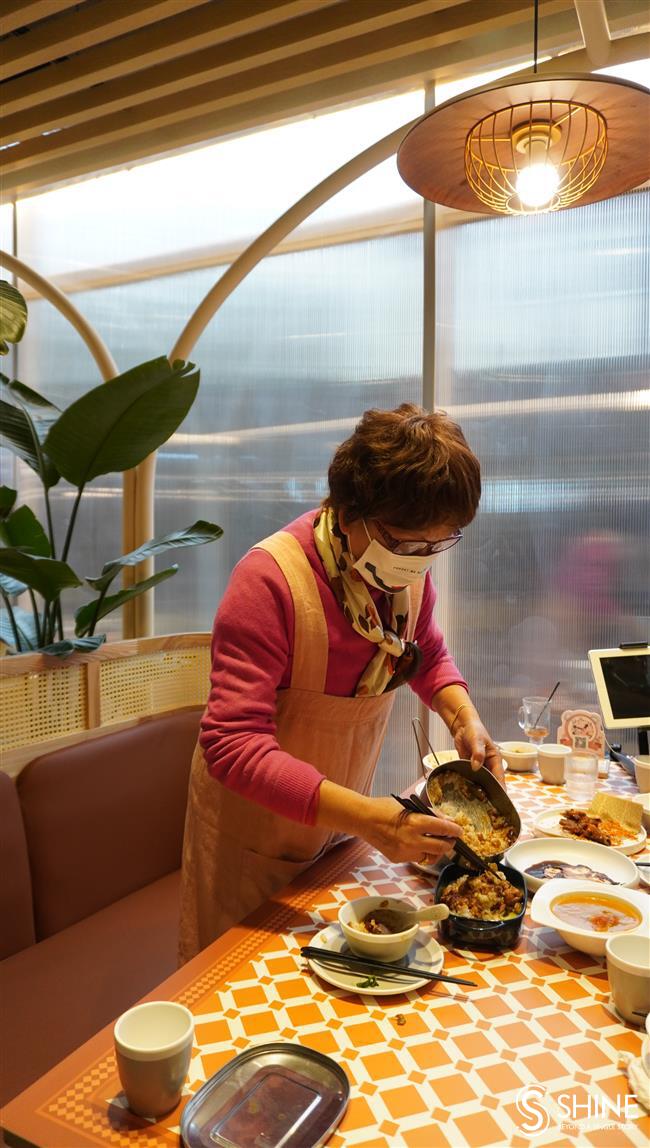 A waitress at work

Working hours for the servers are only at lunch time, between 10:30am and 2pm, which earns them a free lunch box and payment. However, most of them don't do it for the money.

“I feel happy here,” said Li Junhu, a 72-year-old Alzheimer’s patient who appeared on the TV show and has a nickname — Grandpa Xiaomin.

Because of the disease, the servers often forget dish names. So before their shifts begin, Qin and a group of volunteers mark each dish name with a number, which is easier for them to remember.

“We do the training every day before work in case they’ve forgotten the serving routine," Qin said. "Their work begins after a staff lunch." Grandpa Xiaomin was our server.

He smiled as he brought us the menu.

“Do you have any recommendations?” We asked him.

“I forgot, but I’ve tried all the dishes here and all of them are delicious,” he said.

After being reminded the dish name, he told us his favorite is hongshaorou (pork braised in brown sauce).

“One hongshaorou is enough for you two.”

Although he had already forgotten the dish number, he suggested we not order too many dishes. Grandpa Xiaomin writes down our orders on his notepad.

Guest can watch stories from the TV show on an iPad at their tables. The waiters and waitresses may not serve as fast as ordinary people — and they may even bring you the wrong dish — but they do their best. People in a hurry can order by scanning a QR code. 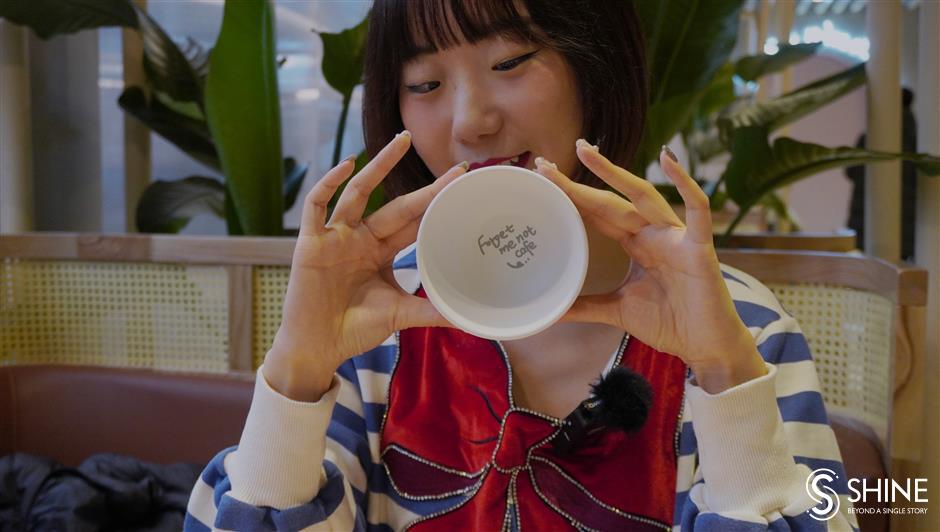 The name of the restaurant is printed on bowls. Diners can watch stories from the TV show on an iPad at their tables.

The menu primarily features traditional Shanghai cuisine at affordable prices. The signature lunch box (the same as the staff lunch) is priced at 18 yuan (US$2.79), and consists of meat and a vegetable of your choice served over rice or noodles in a vintage Shanghai-style lunch box. 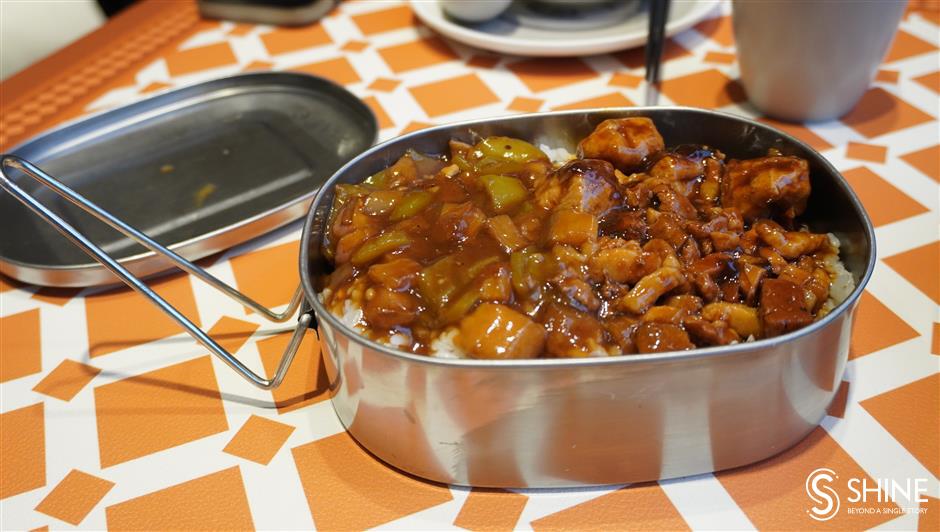 “it tastes great and isn't greasy," he said. "A beautiful pork belly in layers, no unpleasant porky smell, and tender. For 38 yuan, it’s more than you would expect. There are five pieces of pork and even a piece of abalone." 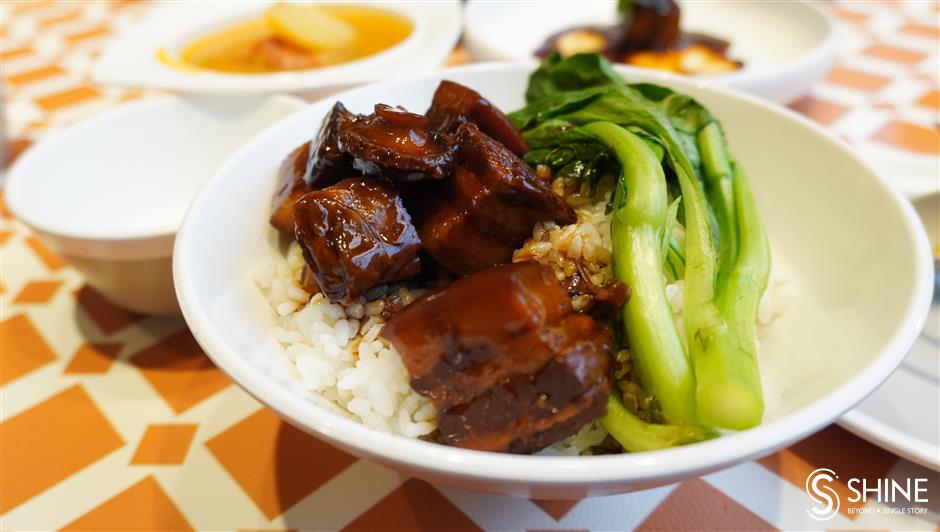 There are also fusion dishes on the menu, such as Malaysian laksa and Hong Kong-style noodles.

Qin said the restaurant hopes to attract more young people from across the city. 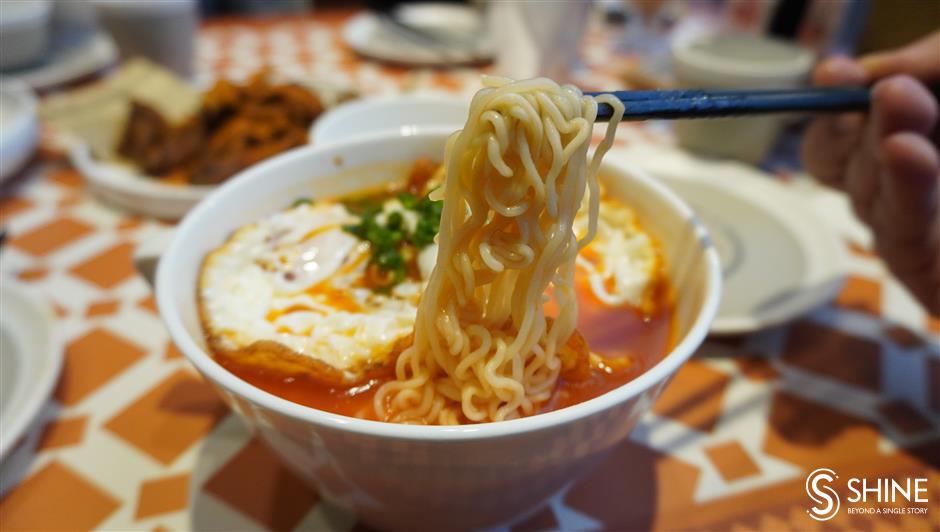 “We’ve gotten support from the government and the community, who help with the supply of ingredients and compensate for the lack of staff due to the pandemic," Qin said. "We've even received invitations from other cities to offer the restaurant as a public welfare project."

Forget Me Not Cafe

﻿
Special Reports
﻿
A Singapore apartment worth waiting for
An unforgettable dining experience in Shanghai
Design with the health of the planet as a priority
Checking out the tailor-made stalls at South Bund Fabric Market
Generation Z Cupid shoots arrows through cyberspace
Fashion brands celebrate Chinese New Year with latest products
For some people, saying 'no' is hard to do. Why is that?
Enjoy traditional culture on Sanlin old street
Safeguard helps children wash hands properly
China wins a boost for international luxury brands
EXPLORE SHINE