Where there are young people, there are fashion and luxury brands.

The global fashion and luxury market’s center of gravity has been shifting to China, specifically to the hands of the country’s millennials (born between 1980 and 1995) and Generation Z (born after 1995 who are at least 20 years old), who are now an emerging source of market growth in their own right.

A recent report by Bain & Co and Tmall Luxury Division revealed that China’s young people are the core consumers of fashion and luxury products, having a powerful influence on increased digitalization.

Though young, they are savvy consumers who place greater emphasis than other generations on the “pursuit of fashion,” and show less preference for the “classics” and a greater preference for designer editions and cross-brand collaborations.

The report echoes the latest consumer insights of L Catterton, which note that China’s young group accounts for 17 percent of the population but 25 percent of total expenditure on new brands, even though half are still in school, with limited income.

“They are not only consumers of new brands and new products, but also the new trendmakers, who will shape and pioneer the country’s fashion revolution,” said Amy Fan, founder of Fashion Zoo, a groundbreaking fashion event which debuted in Shanghai three years ago.

There are about 600 million millennials and Gen Z in the world, and China accounts for half of the population, 20 times that of the United Kingdom and twice Europe’s. “The biggest fashion consumer market is absolutely in China,” Fan said. 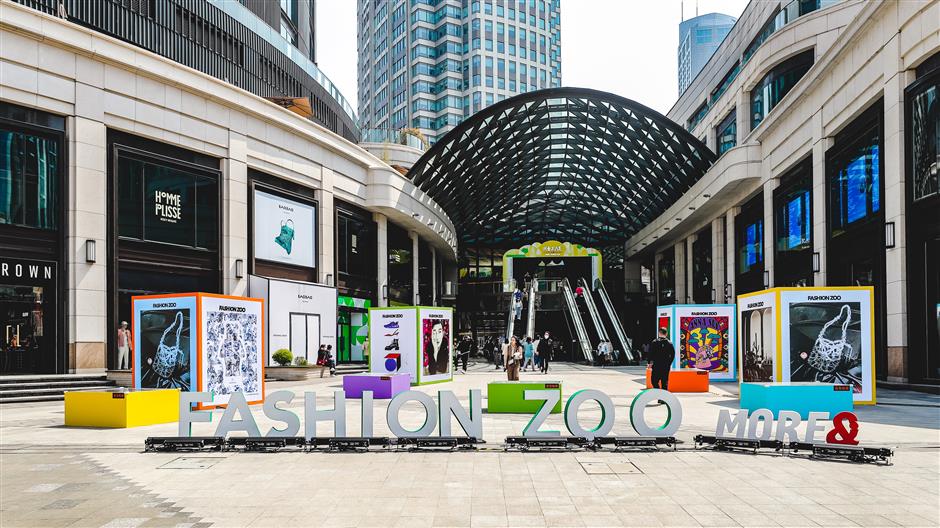 The “50 X 50 New Born” exhibition by Fashion Zoo is in full swing at Taikoo Hui.

Fashion Zoo targets China’s young group. An art and fashion exhibition “50 X 50 New Born” held by Fashion Zoo is in full swing at the Taikoo Hui commercial complex on Nanjing Road W. in Shanghai. A total of 50 artists and designers from all over the world are showing their life stories on 50 giant magazine-like covers to present their works with the themes of “New Born” and “Sustainability.”

The exhibition can be seen as a trend of today’s fashion and luxury players catering to the tastes of China’s young group through cross-brand collaboration, limited editions, customized products and many others, as millennials and Gen Z are becoming an undeniable force underpinning the rise of the fashion consumer market in China.

“Creativity drives business, and we will gather young creators in the global fashion and art fields to the platform of Fashion Zoo,” Fan said. “Young people know what young people need, and it’s the way for future fashion.”