How mothers' 'liquid gold' can be shared with those needing it

As a mother of a 5-month-old baby girl, I know the importance of breastfeeding, which gives infants perfect nutrition and protection from infections.

However, not all the infants have access to the “liquid gold.” Sometimes they are born premature, or perhaps their mothers can’t lactate properly. The ideal solution is a breast milk bank, where mothers who produce more milk than their babies need can donate the surplus to help others.

But when I asked friends in a mothers’ chat group where to donate the milk, none knew. Several told me there was mom-to-mom sharing online, but that didn’t sound very safe to me.

Searching for information online, I found several articles about a milk bank at Children’s Hospital of Shanghai, which provides free nutrition for premature and sick infants.

I phoned the donation center to schedule an appointment. I was told that donors must pump milk on the spot at the first visit to have it tested. There were no other requirements other than bringing my cell phone to show my health QR code. 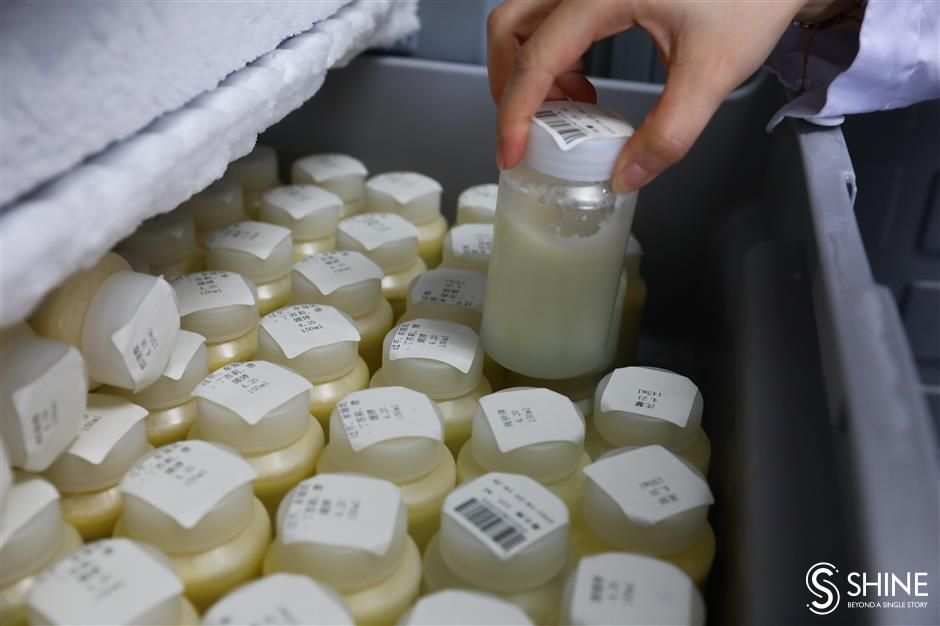 Donated breast milk is bottled and can be stored for up to six months at the milk bank of Children’s Hospital of Shanghai.

The donation center is on the 11th floor of the inpatient building of the hospital. It has three separate rooms and is equipped with hospital-grade electric breast pumps, each costing about 50,000 yuan (US$7,700). There are also three laboratory freezers. Two are set at minus 38 degrees Celsius to store the milk, with the other is set at minus 80 degrees Celsius and used to protect frozen samples.

According to a doctor there, the milk can be stored for up to six months and is pasteurized before being given to infants. A frozen sample can be kept for 30 years.

A notice at the milk bank tells participants that they must have given birth within 10 months to ensure the nutritional content of milk. 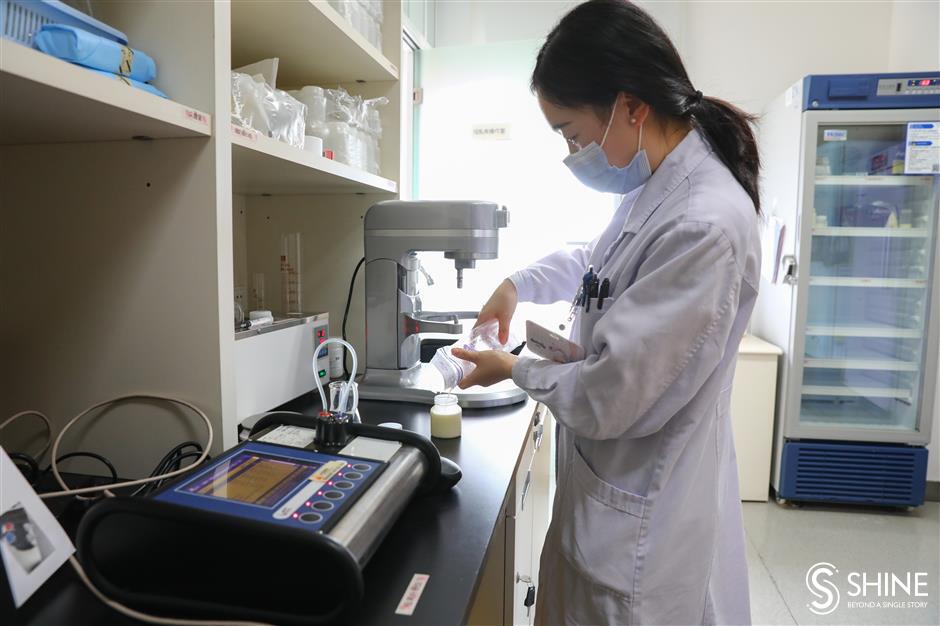 Donated breast milk is pasteurized before being given to needy infants.

A doctor gave me a consent form and requested basic information, such as my age, my job, my educational background, the birth date of my baby, and her weight and height. Then, I had to have my blood tested for possible infectious diseases such as HIV or syphilis.

All that done, I pumped milk from my breasts. The electric pump made me feel how my infant daughter must feel when she is being fed. All the accessories, such as breast shields, connectors and bottles, are disposable.

To my surprise, the doctor gave me a small gift to thank me for participating in the breast-milk donation program. 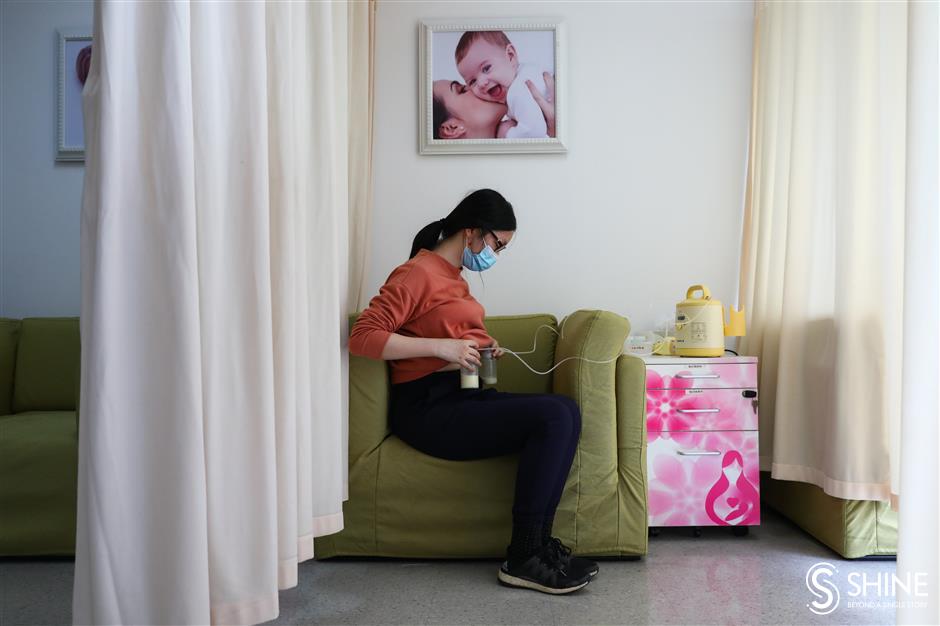 Zhu Ying pumps her breast milk at the hospital.

I received my blood and breast milk results a week later. All were normal. The breast milk test measures basic nutritional content, including protein, fat, dry matter, sugar and energy.

The second time I visited the breast milk donation center, I not only brought my frozen breast milk but also interviewed Zhang Ting, director of the center and chief physician at the hospital’s gastroenterology department.

“For premature infants, breast milk is more than food. It’s a life-saving medicine,” Zhang told me.

Established in June in 2016, the non-profit milk bank is the first of its kind in the city and one of about 25 in China. It opened more than 100 years after the world’s first human milk bank opened in Vienna in 1909. China’s first milk bank opened in 2013 in the southern city of Guangzhou.

“The idea of founding a milk bank emerged in 2015 when the hospital treated a child who was suffering from intractable diarrhea,” Zhang explained. “At that time, babies were fed formula milk. The mother asked us whether breast milk was available. Five or six caring moms were recruited to donate their breast milk. Unfortunately, the child did not survive. Since then, we began to focus on the importance of breast milk.”

The Committee on Nutrition at the European Society for Pediatric Gastroenterology, Hepatology and Nutrition emphasizes that mother’s milk is the first choice in feeding premature babies. When that is not available, donor milk is the next best thing.

As of March this year, 685 mothers had donated 4.7 million milliliters of breast milk to the Shanghai hospital, including 256,050 ml of freshly pumped milk and the rest frozen. One donor holds the record for giving 400,000ml of breast milk.

The milk has been fed to 1,290 needy babies at Children’s Hospital of Shanghai, Shanghai Children’s Medical Center and Shanghai First Maternity and Infant Hospital. 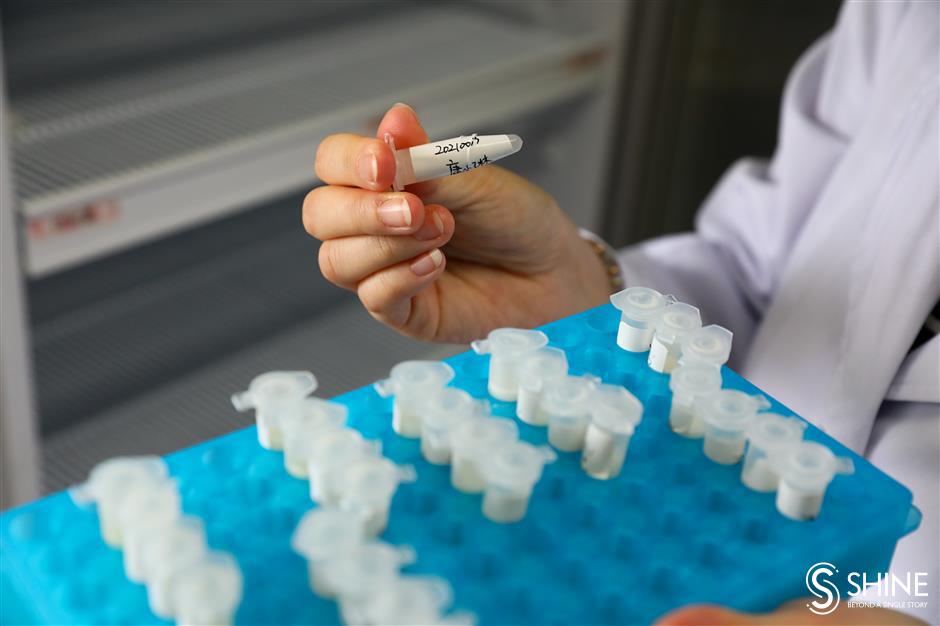 Breast milk samples can be kept in a laboratory freezer for 30 years.

Zhang Yayan, 31, is one of the breast milk donors. She drove from the nearby city of Kunshan in Jiangsu Province to Shanghai to donate milk even at the height of the coronavirus pandemic. Her daughter is now 22 months old.

“Normally, it took me one hour from my home in Kunshan to the hospital, but that stretched to an hour and 40 minutes because of highway health checkpoints,” said Zhang, a music program presenter at Kunshan People’s Broadcasting Station.

Zhang began donating breast milk in October 2019, when her daughter was three months old. During the journey, she used two insulated boxes and five to six thermal bags to store her pumped milk. Each bag was labeled with name, date, time and volume.

“I really appreciated my family’s support,” said Zhang. “My husband works on a medical staff and knows the importance of breast milk. He accompanied me to Shanghai and helped carry the bags.”

New mother Mou Yani, 28, also shares her breast milk. A doctor herself, she has donated 13,000ml of milk since March.

“Breast milk cannot be replicated by formulas, especially for premature infants,” said Mou. “As a doctor and a mom, the donation of breast milk gives me a sense of participation.”

The milk bank at Children’s Hospital of Shanghai, funded by a three-year government grant, is so far the only non-profit breast milk bank in the city. Director Zhang Ting told me that a lack of premises and high operating costs were hindering the development of more banks.

“We are negotiating with a chain store that sells mother and baby products to set up more collection sites in the city, which would make it more convenient for donors,” said Zhang. “Nursing mothers, regardless of nationality, are welcome to donate their breast milk.”