Climbing Mount Everest is hard enough, pedaling the distance is a grueling challenge

To conquer Mount Qomolangma, known as Mount Everest in the West, is a dream cherished not only by mountaineers but also by a group of Shanghai-based amateur cyclists.

They accomplished their mission — in a manner of speaking — without ever stepping foot in the Tibet Autonomous Region.

The team of five expats and a Chinese undertook the global cycling challenge called Everesting at Mount Mogan in neighboring Zhejiang Province.

Under the worldwide rules of the challenge, cyclists pick a hill anywhere in the world, then ride up and down it until they have cycled 8,848 meters, the height of Mount Everest.

To date, approximately 2,500 cyclists around the world have completed the challenge, some 70-80 of them in China. 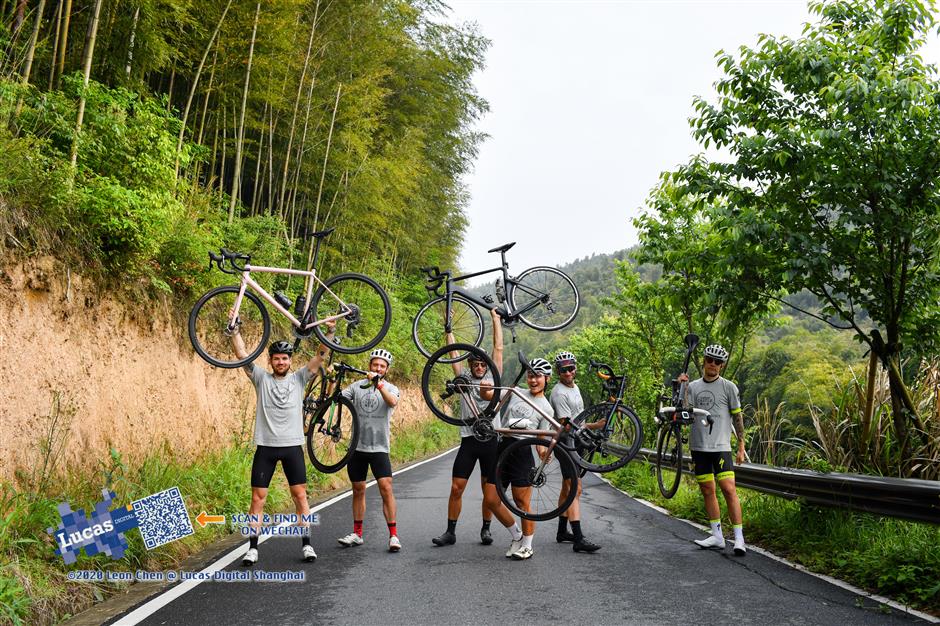 From left: The six challengers — Alexander Shandorff from Denmark, Mathieu Constant from Belgium, Le Blan from France, Sarah Chi from China, Sebastien Legrand from France and Ville Miettinen from Finland — pose for a group photo.

“The thought of Everesting had been on my mind for a while,” Frenchman Jean-Baptiste “Jb” Le Blan told Shanghai Daily.

The 41-year-old general manager of a software company, who has lived in Shanghai for 10 years, was the organizer of Mogan group challenge. Joining him were cyclist friends Sebastien Legrand from France, Ville Miettinen from Finland, Alexander Shandorff from Denmark, Mathieu Constant from Belgium and Sarah Chi from China.

Mount Mogan, 719 meters high, is part of the Tianmu Mountain Range, about 200 kilometers from Shanghai. Naked Castle Resort, perched at the top of Mogan, sponsored the challenge. It closed off one of its access roads to create a 2.5-kilometer course for the cyclists, with a vertical rise of about 150 meters. That meant the challengers had to cycle 60 laps.

The challenge started at 4:18am on April 26. The group members were keenly aware that the Everesting China record was about 12.5 hours for men and 16 hours and 51 minutes for women. 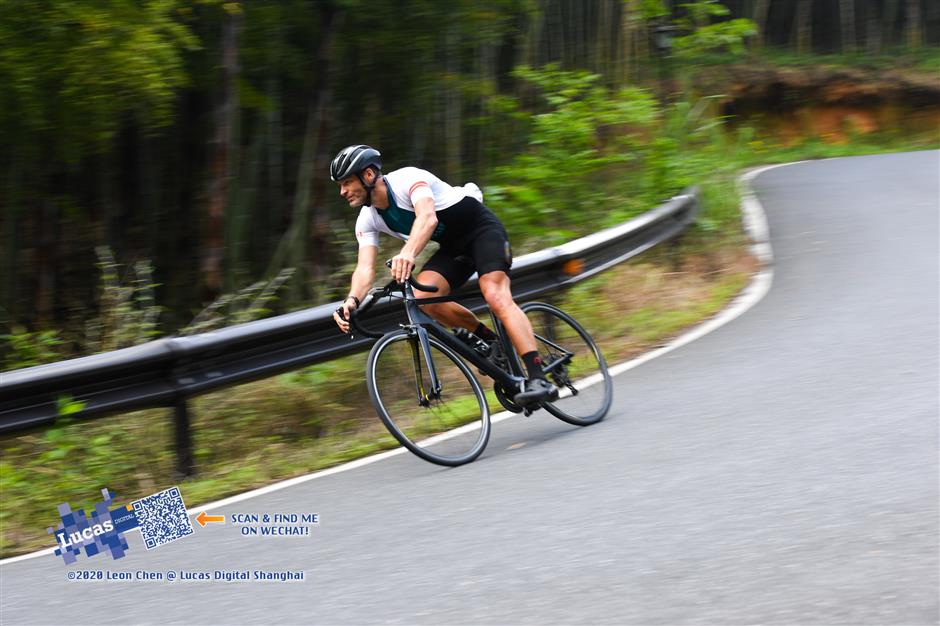 Frenchman Jean-Baptiste “Jb” Le Blan, who has lived in Shanghai for 10 years, was the organizer of the group Everesting challenge at Mount Mogan.

A supply tent was set up on the top end of the course, with food, drinks, energy bars, salt tablets and ice.

A friend of Chi’s was tent manager, dispensing food and drinks, and addressing any other needs requested by the cyclists. Le Blan’s 13-year-old son César was also on hand to cheer his father along.

“Apart from weather and road conditions, supply and backup are very important in this kind of challenge,” Le Blan told Shanghai Daily.

A month ago, he and another cyclist friend planned to do the challenge on Mount Mogan.

Le Blan said he changed his mind after seeing the weather and course conditions. His friend, however, finished the challenge in 15 hours but ended up the worse for wear because of lack of adequate supplies.

“Therefore, we were fully prepared this time,” he said. 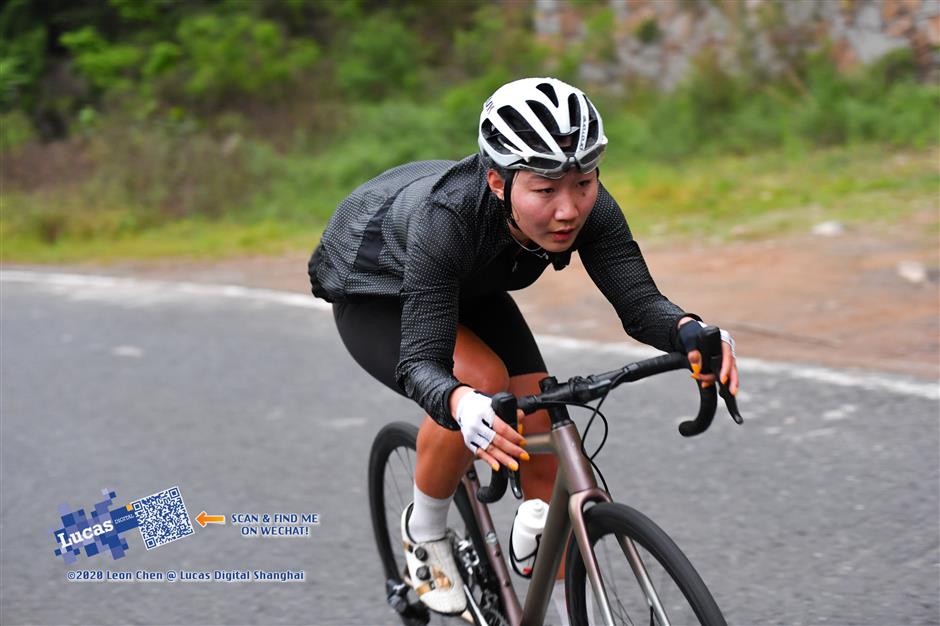 Before Sarah Chi, only seven female cyclists completed the Everesting challenge in China.

None of the five members on the April 26 challenge had intense climbing experience. They trained on flat Shanghai roads. Sometimes Le Blan and friends would go cycling in other provinces, like Guizhou and Yunnan — where the terrain is more hilly.

The cyclists each had individual strategies for the challenge.

Le Blan planned to take a five-minute rest every six laps, during which the tent manager would massage his leg muscles. The frequency of the breaks increased in the latter laps.

Chi didn’t stop for a break until the 20th lap — a third of the way to the finish.

“I didn’t really have a strategy,” she said. “I just didn’t want to rest too much and lose my pace when my body condition was functioning so well. In the latter part of the challenge, I rested according to my body needs.”

During breaks, she would eat noodles, sandwiches and fruit.

“I needed food and energy to keep me going,” she said. “Other challengers ate only some candy, salt tablets or maybe light snacks. We all had different habits.” 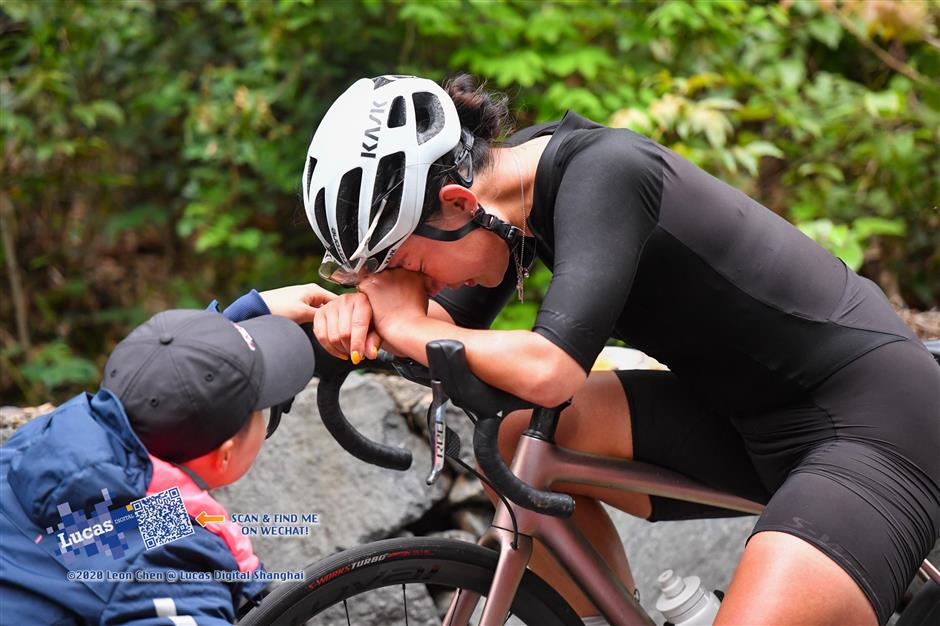 Sarah Chi, close to her limit, is encouraged by tent manager Michelle in the last few laps.

The day of the challenge was a pleasant 25 degrees Celsius. There were no accidents or punctures. It was simply a grueling test of pushing stamina and mentality to the limit.

“The hard time started when I had finished about 60 percent of the challenge by 1 or 2pm,” said Le Blanc. “I had done 5,000 meters, but there were 4,000 meters left, which was a lot. The route is a repeat loop. For me, it was difficult mentally.”

By the end of the day, Miettinen was the first cyclist to cross the finish line, creating a new Everesting China record of 8,936 meters in 12 hours and two minutes. Le Blan came in four minutes after the Finn, logging 9,084 meters in 64 laps. 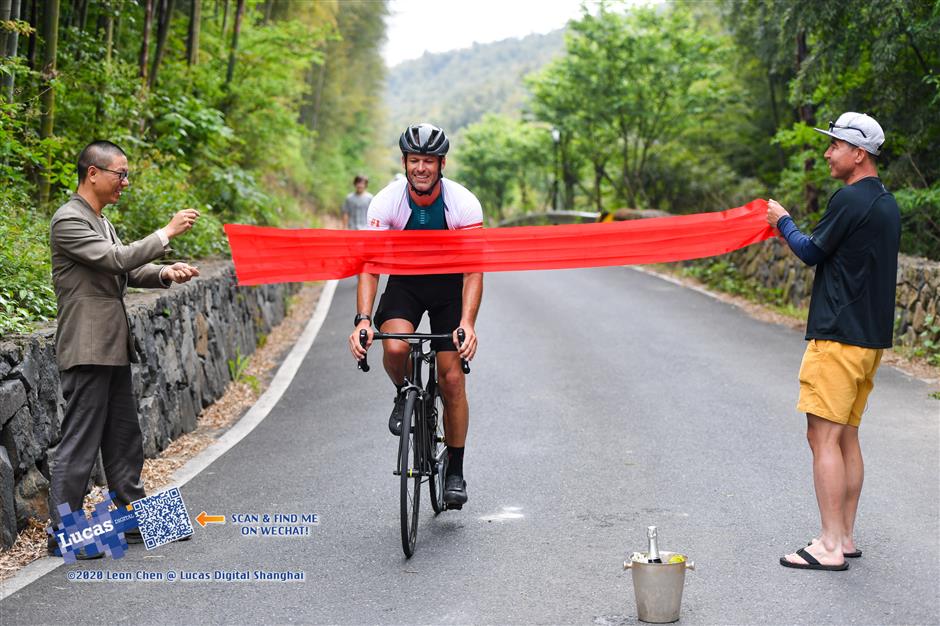 Chi was the last to come in, after a few “fidgety” last laps. Her altimeter wasn’t showing the correct elevation or pausing when she was cycling at slow speed.

“I was really irritated by the altimeter, which seemed to be putting my efforts in vain when I was already so exhausted,” Chi recalled.

Eventually, she completed 64 laps — a few more than she needed — to log 9,156 meters in 14 hours and 21 minutes, breaking the previous Everesting China record for women by 150 minutes.

“The challenge was hard, and you felt like you were dying in the last few laps,” said Le Blan. “But we achieved what we set out to do and feel extremely proud.” 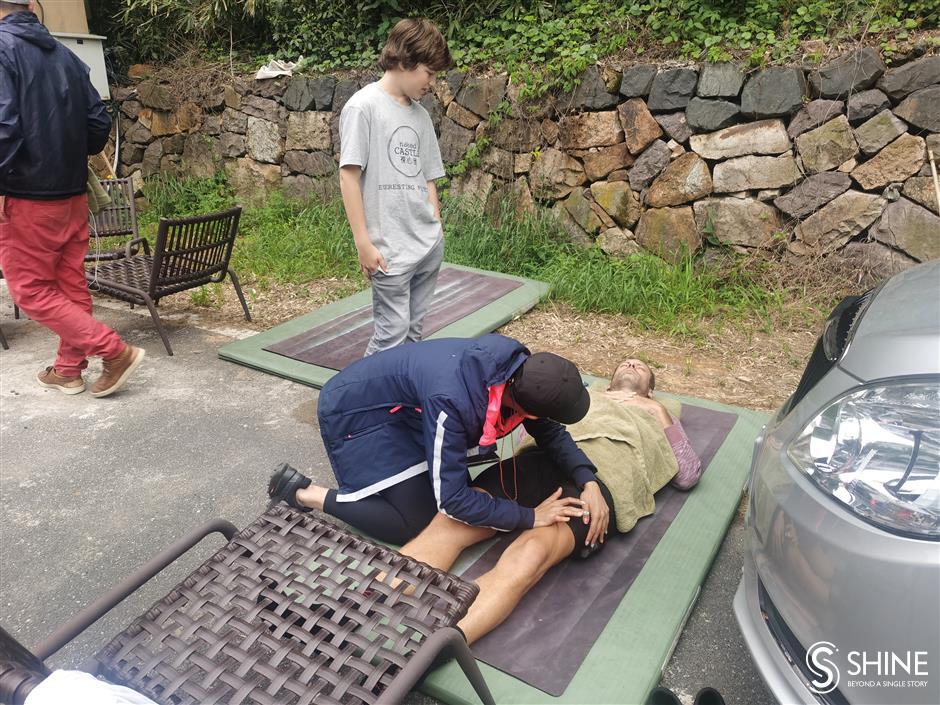 An exhausted Le Blan takes a rest after completing the challenge while his son César looks on.

Chi, 27, who hails originally from the northeastern province of Liaoning and works in the finance department of a medical company in Shanghai, said the purpose of participating in the challenge was to prove to herself and others that she could do it.

“I never did long-distance climbing before, and I knew that I would suffer,” she said. “But I don’t like saying ‘no’ to challenges.”

Chi said she cycles on weekends and early weekday mornings, and has participated in road cycle competitions for five years.

“Apart from making friends, cycling helped me to conquer an inferiority complex and build up my self-confidence,” she said.

There was no material reward for the successful challengers beyond the cyclists’ names and times being enrolled on Everesting’s Hall of Fame on the official website — www.everesting.cc. 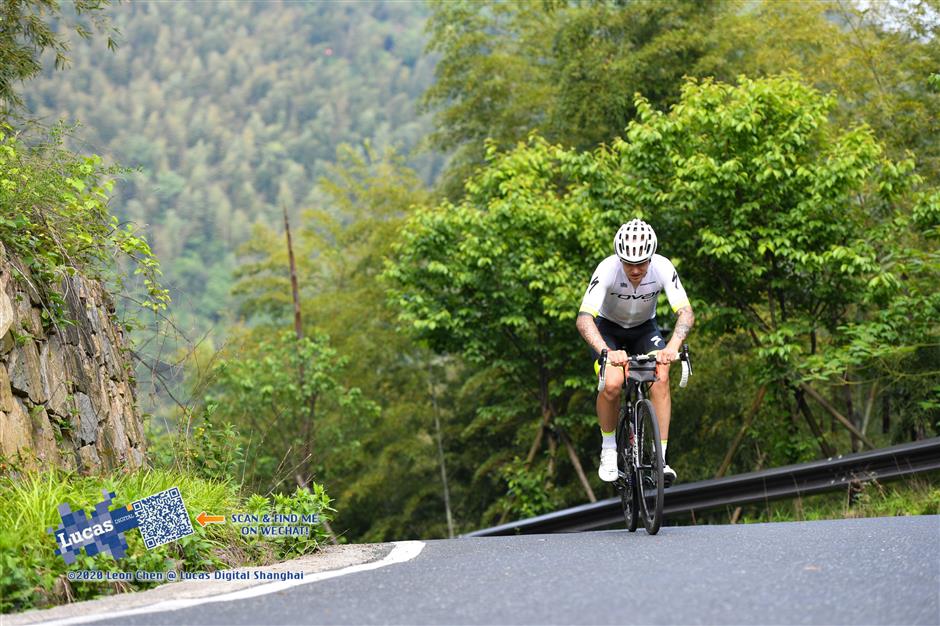 Everesting is an activity in which cyclists ascend and descend a given hill multiple times, in order to cumulatively “climb” the 8,848-meter elevation of Mount Everest.

The forerunner to the event was undertaken by George Mallory II, grandson of the English mountaineer George Mallory, who disappeared on an Everest expedition in 1924.

In 1994, 70 years after his grandfather’s body was finally found on Everest, Mallory “climbed” Mount Donna Buang in Australia, riding eight “laps” of the 1,069-meter mountain.

The format and rules of Everesting were cemented in 2014 by Australian cyclist Andy van Bergen, who is considered the founder of the challenge. In the first official group challenge that year, van Bergen organized 65 riders, 40 of whom finished the challenge.

The story of Naked Castle originated in 2007 with South African Grant Horsfield — Chinese name Gao Tiancheng — who founded the co-working space Naked Hub and then the resort brand Naked Retreats. He accidentally found the castle’s ruins on the top of Mount Mogan. They were the remains of a venue established by Scottish missionary Duncan Main in 1910. 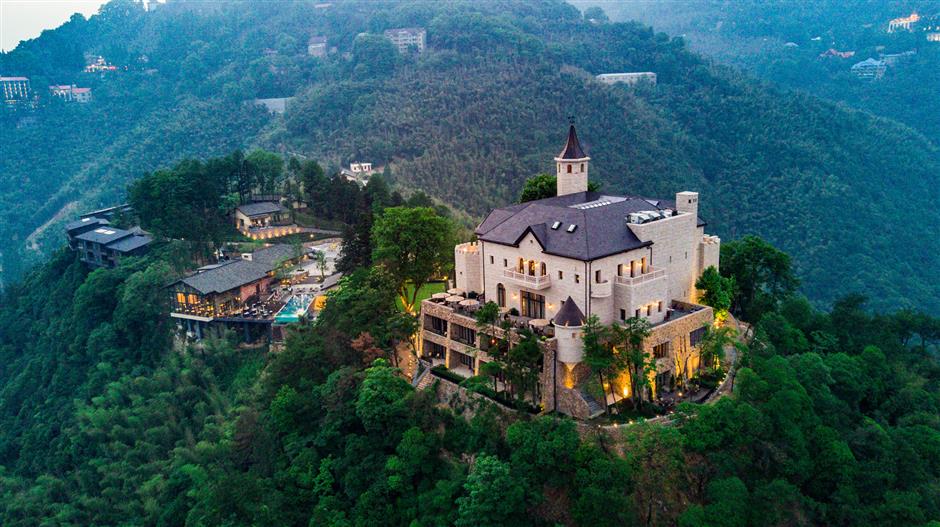 The crisp breezes of Mount Mogan first drew foreigners as a summer retreat in the 1880s. Large European-style villas, houses, churches and public halls were built for missionaries, businessmen, customs officials and their families.

By 1910, about 300 foreigners, mostly Americans and British, had set up summer homes on the hill. They were later appropriated by the government after the founding of the People’s Republic of China in 1949.

Briton Mark Kitto, the first foreigner to live on the mountain in modern times, obtained a 10-year lease from the government in 2003 and opened the Moganshan Lodge restaurant.

In 2011, Horsfield and his wife Delphine Yip restored the castle ruins and opened Naked Castle Resort.

It has become one of the most popular resorts in the area and a favored venue for sports challenges like mountain biking and Spartan races. Lawn bowling, table tennis, darts, billiards and archery activities are also available.

The resort also owns China’s first natural amphitheater — Rock Theater. It sits at an altitude of 410 meters and has 14 rows of circular staircase seating that can accommodate 220 people for concerts and other events.