With a history of more than 1,500 years, Fengjing ancient town is a thriving town, not just a preserved area for tourists. Some historic houses and sites require a ticket, but wandering around the town is totally free. Dozens of small food stores and antique shops stand along stone pathways, offering many interesting local choices.

As the largest watertown in Shanghai, a network of waterways runs through the town. Taking a boat around the old town is a must, which cross under three famous historical bridges, including the oldest one, 700-year-old Zhihe Bridge.

For Shanghainese, Fengjing is famous for its zongzi, the traditional sticky rice dumpling wrapped with reed leaves. It's a great place to discover the seasonal taste while celebrating the upcoming Dragon Boat Festival, which falls on June 14 this year.

Meanwhile, the ancient town is known for farmer paintings. The famous cartoonist Ding Cong's Exhibition Hall is worth a visit.

A week before the Dragon Boat Festival is high season for zongzi stores, as thousands of zongzi fill the tables on both sides of the stone pathways.

The authentic Fengjing zongzi is called da rou zong, (da rou literally meaning a large piece of pork,) well known for its typical filling of marinated pork that is neither too salty nor too sweet, satisfying the palates of most people who eat it.

With the combination of light and dark soy sauce, sugar and rice wine, just a few ingredients can produce an extraordinary flavor that stands the test of time.

There are also sweet varieties of Fengjing zongzi, filled with sweet bean paste or sweet dates.

There is an auntie sitting outside the Jushuige zongzi store, wrapping zongzi at an unbelievable speed.

The owner of the store said they have sold more than 10,000 zongzi a day. Jushuige also opened an online store on Taobao, so zongzi can be delivered everywhere in China.

Its large size, fresh and abundant ingredients at an affordable price attracts a flood of people who make a special trip here for zongzi.

Different fillings have different prices – zongzi with a huge piece of marble pork filling sells for 9 yuan (US$1.4), with a big piece of pork and salted yolk filling is 8 yuan and with a normal slice of pork is 6 yuan. 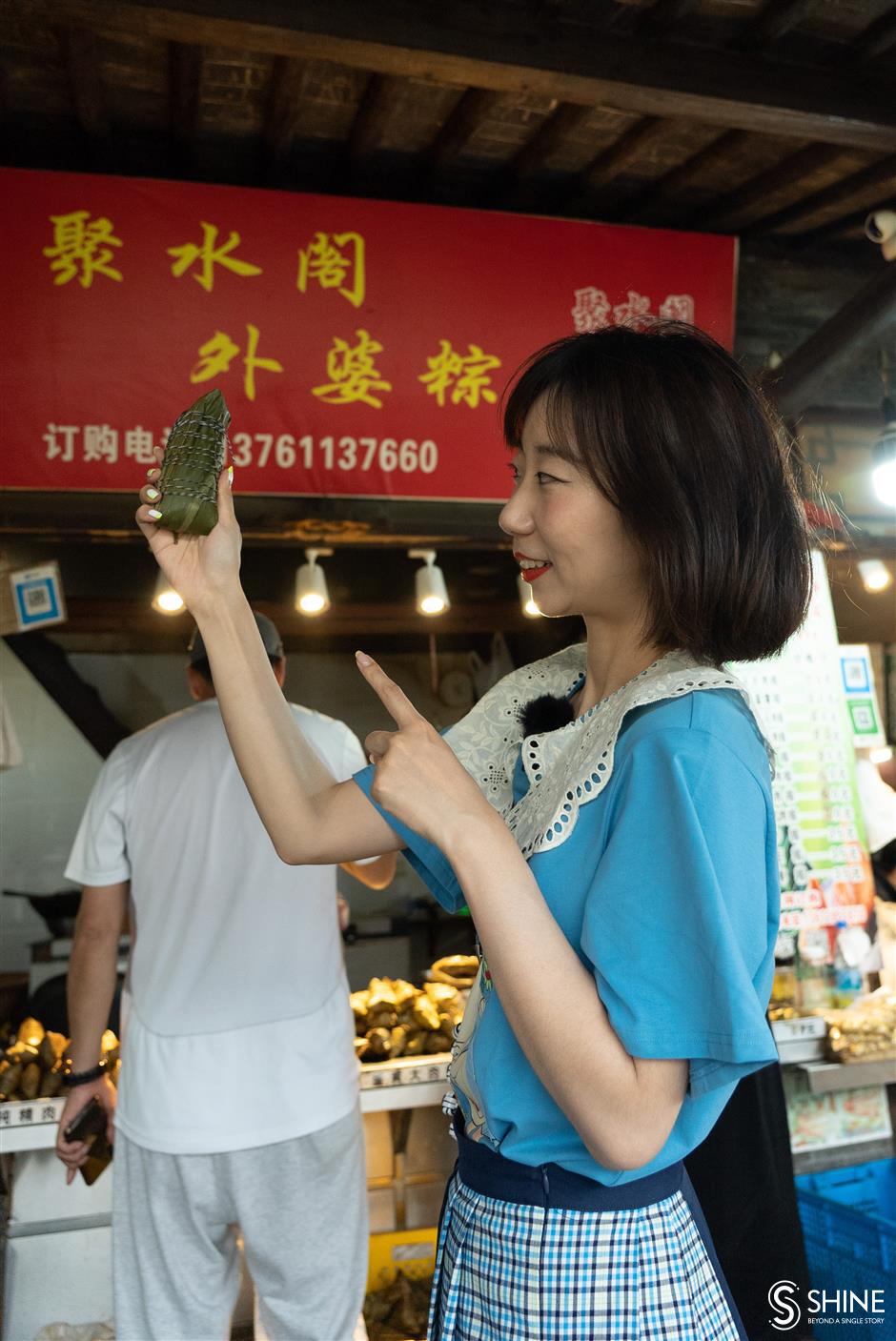 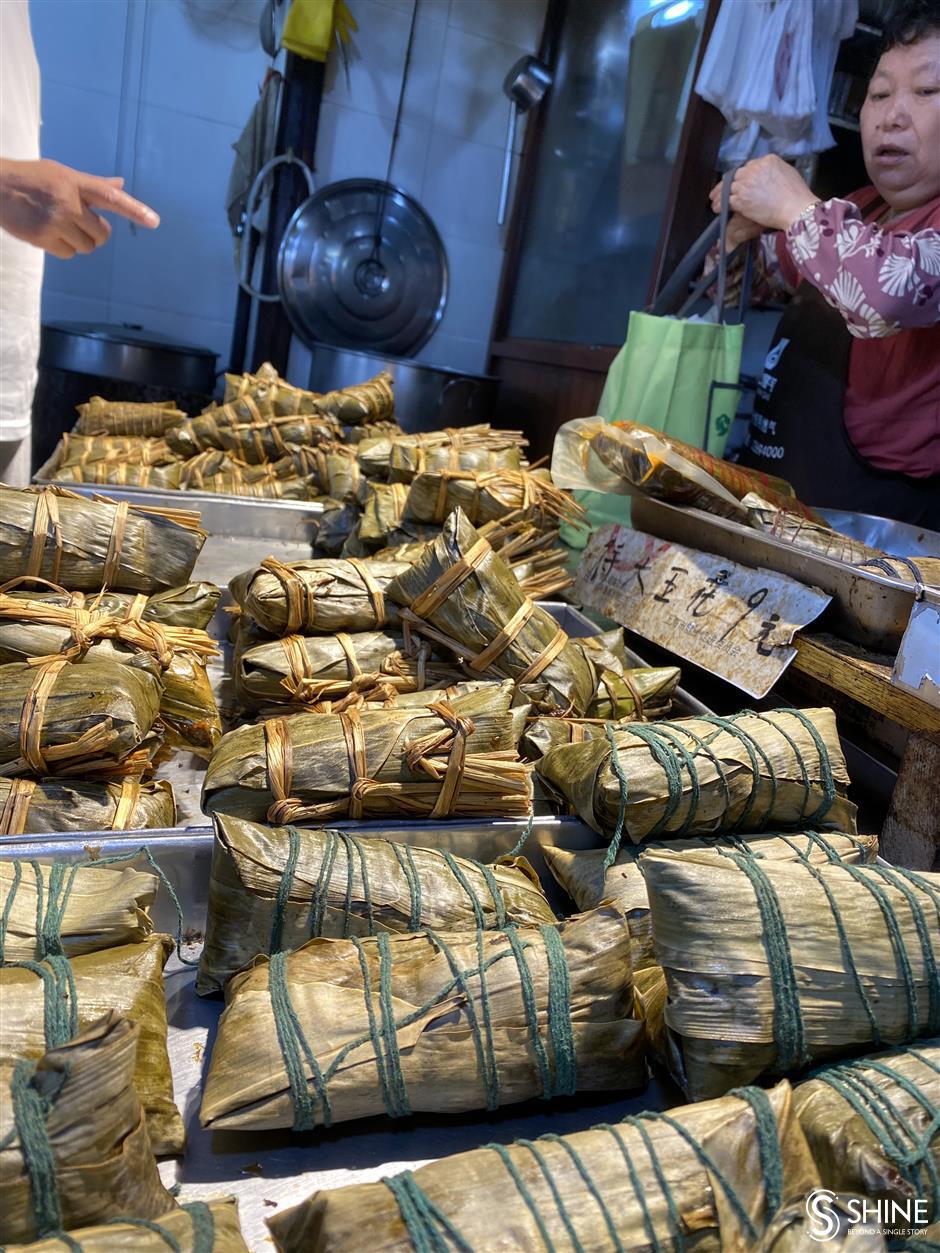 A variety of Fengjing zongzi are sold at a local store.

Compared to other watertowns in the Yangtze River Delta region, Fengjing is more artistic, as it is birthplace of artists – the most famous two being Ding Cong and Cheng Shifa. Their family mansions have been transformed into art museums.

Ding Cong Art Museum is the largest of its kind in the ancient town, displaying many interesting stories and works by famous cartoonist and illustrator Ding Cong and his father Ding Song, a well-known cartoonist in Shanghai more than a century ago.

Ding Cong was born in the old town in 1916. Desiring an easier life for his son, his father refused to teach him to draw – but he became a professional cartoonist anyway.

In addition to his single cartoons, Ding Cong's best-known cartoon series include a comic called "Reflection of the Society." Ding's pen name "Xiao Ding" refers to him being "just one of the people."

The highlight of the art museum is Xiao Ding Library, where Ding's collection of more than 12,000 books is displayed. His study was moved into the art museum from his Beijing home, still maintaining its original look.

Ding's cartoons are printed as guide signs on the walls inside the museum. It's fun to find all of them. 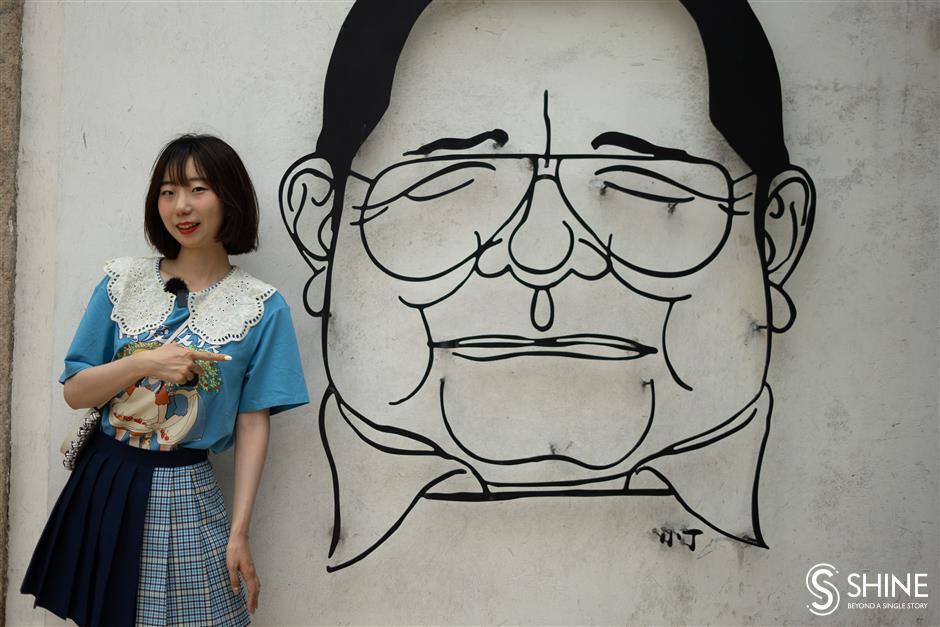 Fiona Li stands in front of a portrait by Ding Cong, a famous cartoonist.

There are different kinds of buildings in the ancient town, most of them built in the Ming (1368 – 1644) and Qing (1644 – 1911) dynasties. Among them is a unique building built in the 1960s, which was once the people's commune office. Part of the building has been transformed into Mao Zedong Image Badges Museum, exhibiting various kinds of badges. The exhibits even include a MiG-15 fighter airplane used during the Korean War.

Very close to the historical people's commune building, don't miss an interesting antique bookstore where you can find many books published between 1960 and 1990. Sun Hailin, the 69-year-old owner of the bookstore, said he has collected more than 10,000 old books. The most popular are picture-story books, also known as xiaorenshu, popular with tourists as souvenirs.

The Starbucks in the ancient town is quite different from others – located in a wooden historical house along the river with a Chinese-style signboard on the gate. 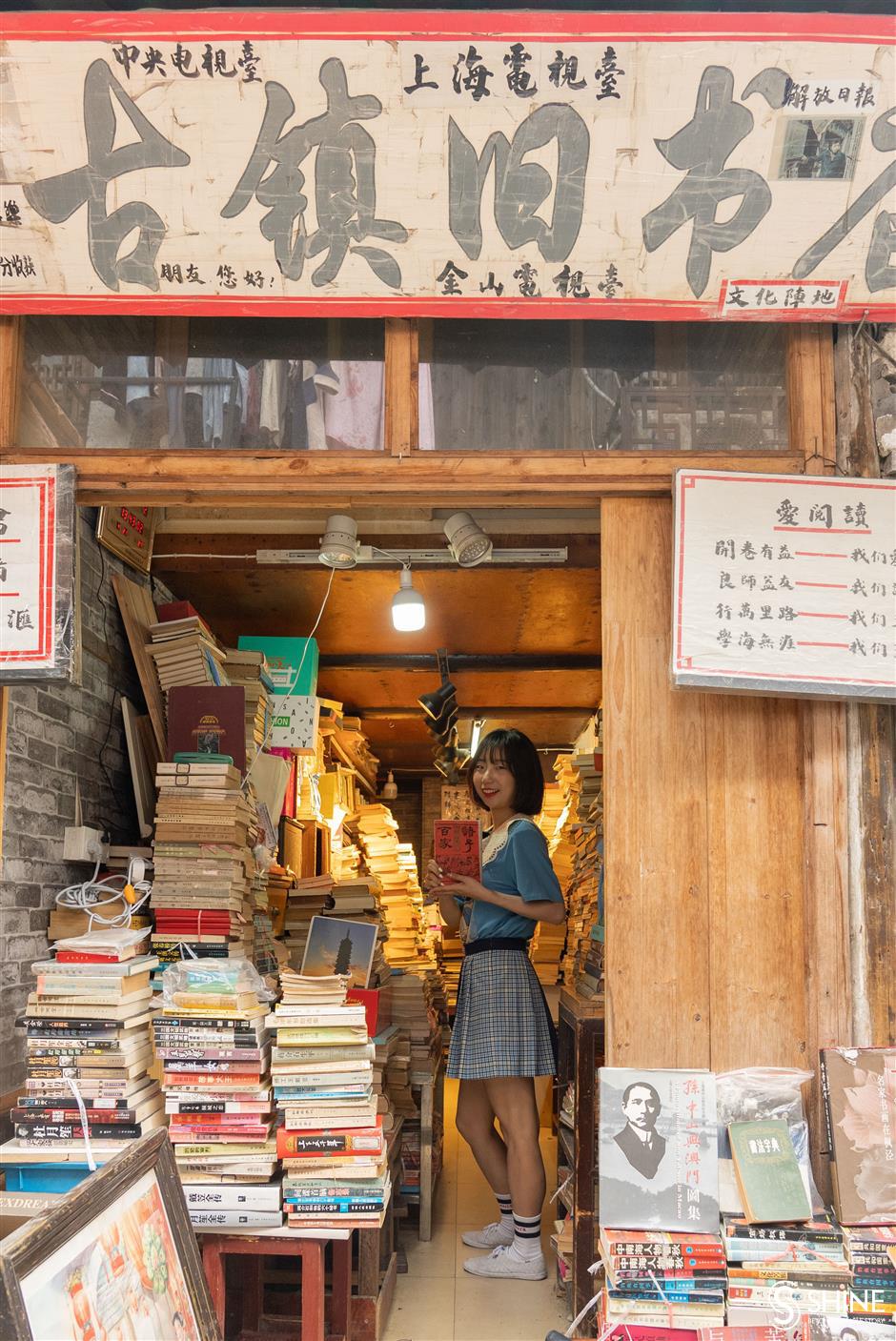 The antique bookstore offers many books published between 1960 and 1990. 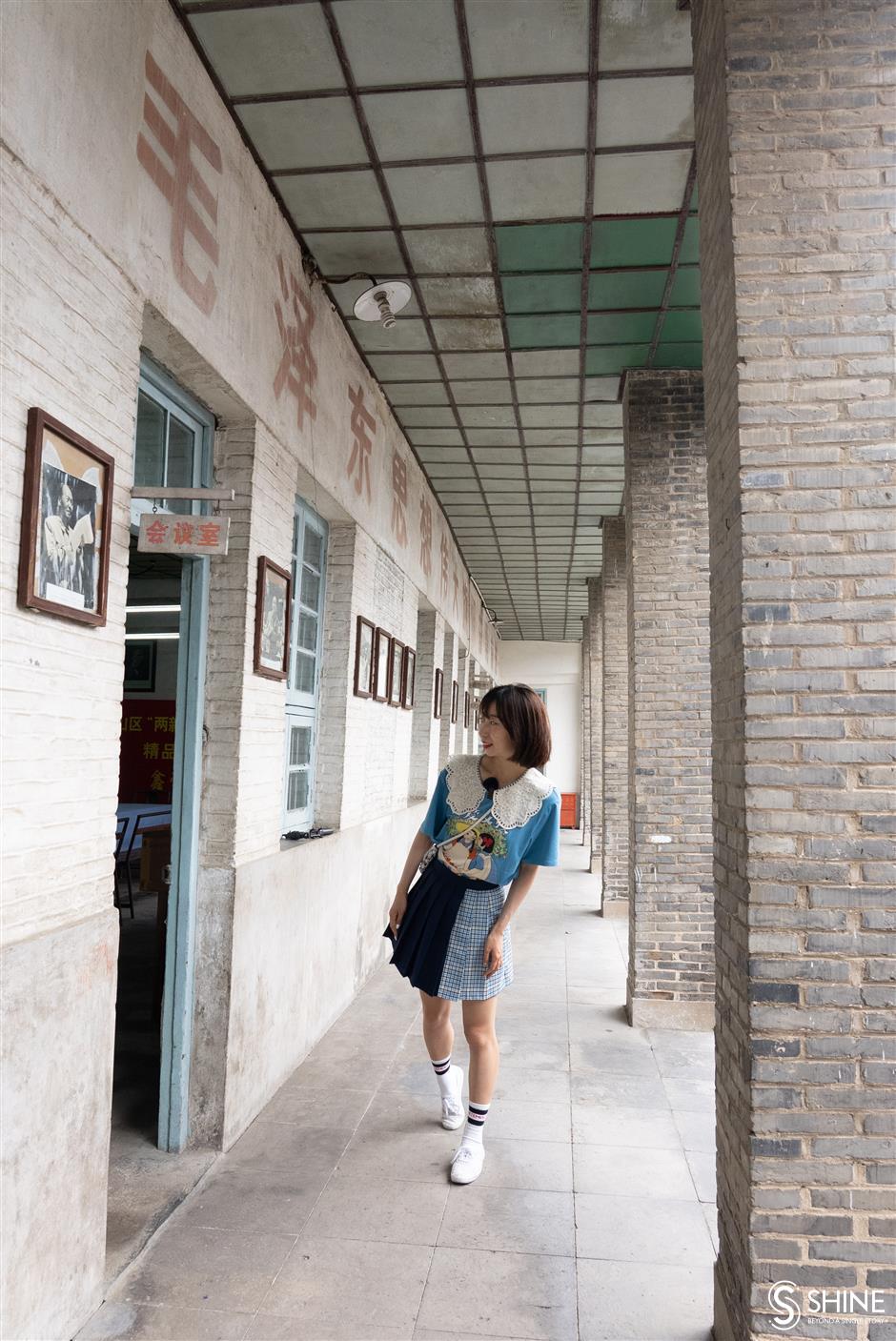 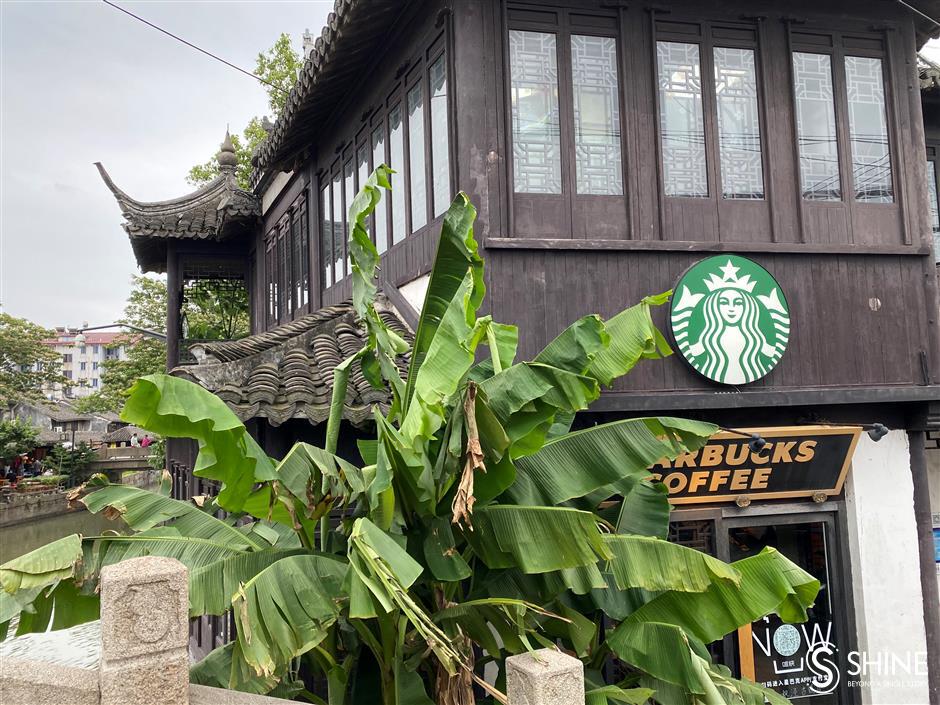 A Starbucks cafe in the ancient town

Fengjing is a center for Jinshan farmer painting, which you can see inside the Chinese Folk Art Village a few kilometers away. The art village is a tourist attraction with an admission price of 25 yuan.

Known for its bold use of colors, Jinshan peasant painting is widely recognized for vivid imagery and unique style. Small bridges, flocks of ducks and blue and white hues create a gentle, pastoral scene.

Cao Xiuwen, a leading artist in this style, has a studio inside the village.

Cao was listed as "inheritor of Shanghai's intangible cultural heritage" in 2009. She has been painting for about 40 years and created more than 200 paintings.

Most of her works feature scenic views of her hometown, depictions of dynamic village life and tourists who explore and enjoy rural life.

Arguably her most famous painting is the "Herbalist girl," and two of her other paintings were selected as souvenir covers by the World Expo 2010 Shanghai, an honor granted to only one painter from Shanghai.

You are welcome to talk to her and play with her pets – a yellow cat and two cute kittens. The cat family sometimes appears in her drawings.

Her works are available for purchase at affordable prices, starting at 200 yuan. Derivatives of Cao's artworks, including a refrigerator magnet, are also available. 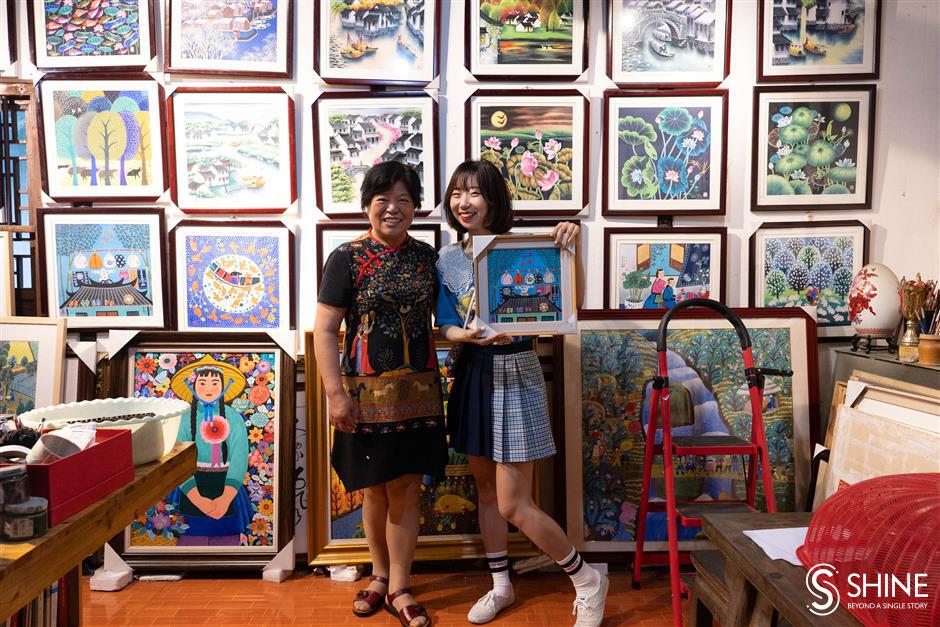 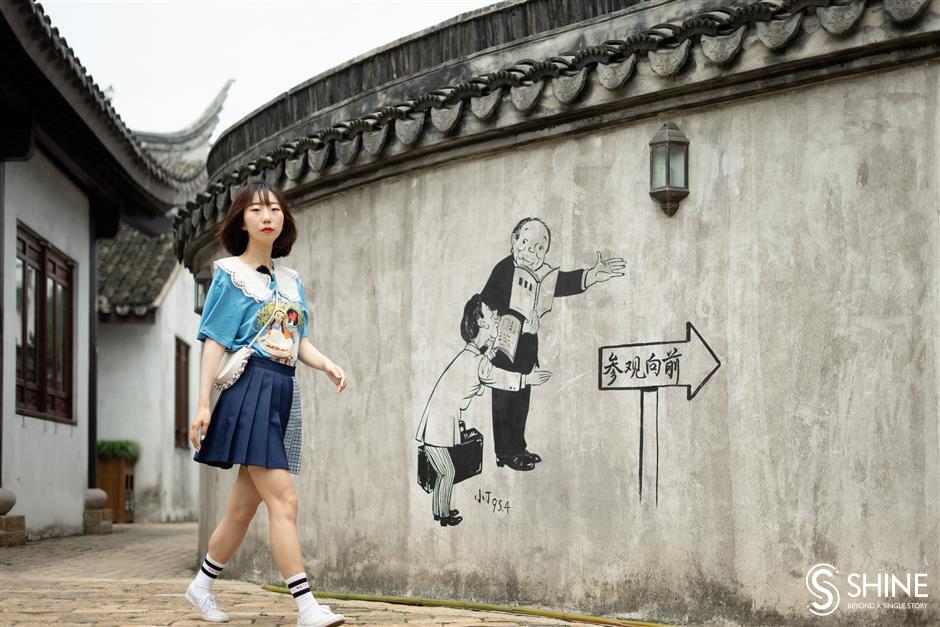