Centuries-old trees are considered living proof of a city, since they have witnessed historical and social changes.

For years, Hangzhou government has recruited a group of professionals to protect the city's old trees in an effort to preserve these salient witnesses.

In the Hangzhou Botanical Garden, there are more than 30 old trees, and the oldest is estimated to be more than 700 years old. Their sound protection is attributed to 59-year-old Professor Lou Xiaoming and his team.

Along with the botanical garden's lush vegetation, Lou has coordinated with the West Lake Scenic Area Management Committee to protect more than 700 old trees in the area.

"Old trees are not only historical witnesses, but also living materials for us to learn about geological and environmental changes and local paleontology," he said.

Lou has been engaged in tree protection since 1989. In the 1980s, however, antiquated tools and technology restricted the protection work.

"We diagnosed a tree according to limited experience," he said. "For instance, we knocked on trees and listened to the echo to tell the size of holes inside the trunk."

Now, the situation has changed. Lou uses a sonic machine and software to detect and analyze the hollow section inside trunks, which greatly enhances efficiency. 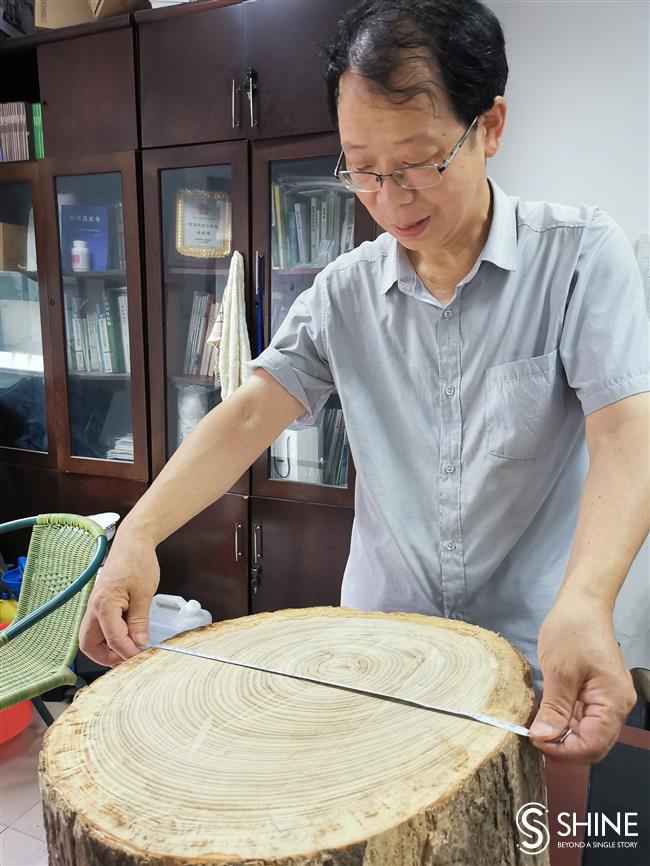 Lou Xiaoming measures the length of a tree trunk in his office.

Wet conditions in the holes can attract bugs and bacteria, which is devastating for centuries-old trees. Lou stuffs the hollow parts with chemicals to prevent the risk of decay.

For rotten tree parts, he gets rid of the decomposing tissue and then uses a machine to burn the surface till it carbonizes.

"Carbonized tissue no longer decays. It's one way to protect old trees, because the tree keeps growing even with some carbonized parts," Lou said.

The oldest tree in the botanical garden was struck by lightning years ago, but Lou said it was a blessing in disguise because the lightning carbonized some parts of it, making the tree continue to thrive.

In addition to a tree's trunk, the underground root system is also vital for protection.

"Some old trees stretch their roots more than we once thought," he said. "Therefore, we use radar machines to detect the underground root system in to better protect them."

In recent years, Zhejiang Province has emphasized rejuvenating hamlets by building infrastructure, upgrading facilities and giving facelifts to folk houses. However, old trees are vulnerable to be damaged during the construction.

"The place where an age-old tree is growing might be paved with slabs, which would cause changes in water seepage and soil permeability and then gradually harm the tree," Lou said. "Some landscape designers like to build pavilions next to old trees. They think pavilions can provide people with spots to take a break. On the contrary, they alter the tree's original living surroundings and might hurt it."

In 2017, Zhejiang government issued the Old Tree Protection Regulation to stipulate the protective areas of trees according to their ages. However, some old trees have still been damaged during urban and rural construction.

Lou was invited to revive old trees when local government realized some of them were dying. Not long ago, he coordinated with Pinghu County in northern Zhejiang, saving a 1,400-year-old gingko tree.

A few years ago, he and his colleagues combed through the old tree resources in the West Lake Scenic Area and set up a database. The most common old-tree varieties are ginkgo, camphor and catalpa trees.

"These old trees are included in natural and cultural heritage, and they add to the city's landscape and appearance. Nothing in the city could replace them," Lou said. "In villages, residents believe old trees can bless them like gods. The towering tree is the symbol of nostalgia for people who have left their hometowns. Protecting trees is protecting people's memories." 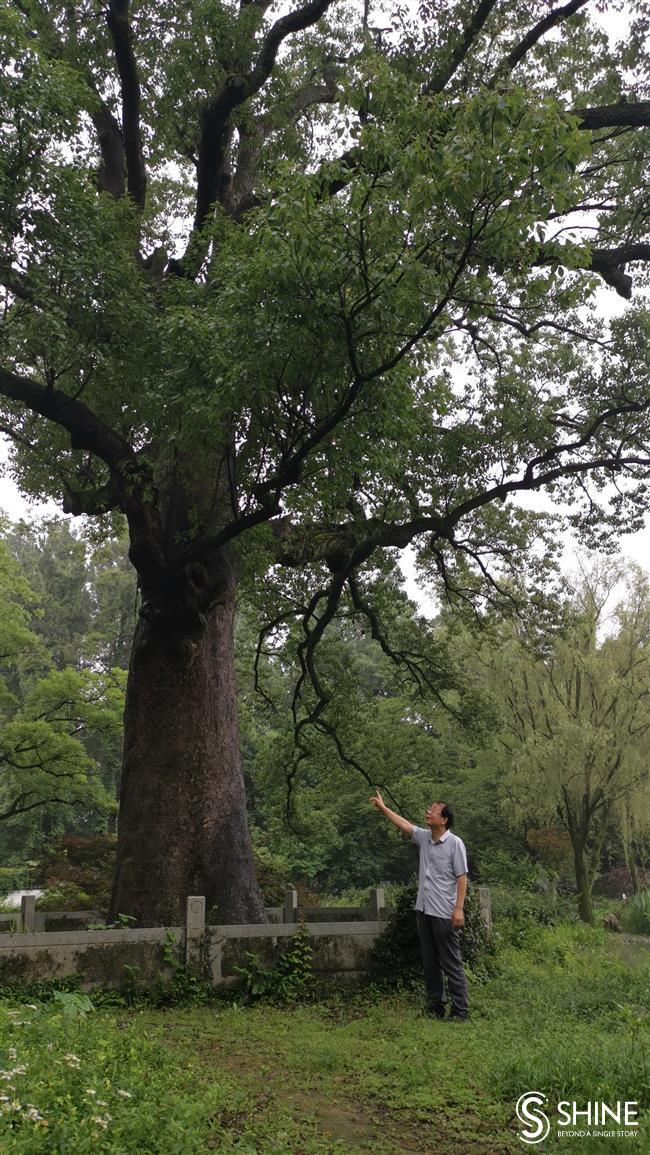