Moments in Jing'an District in June of 2021 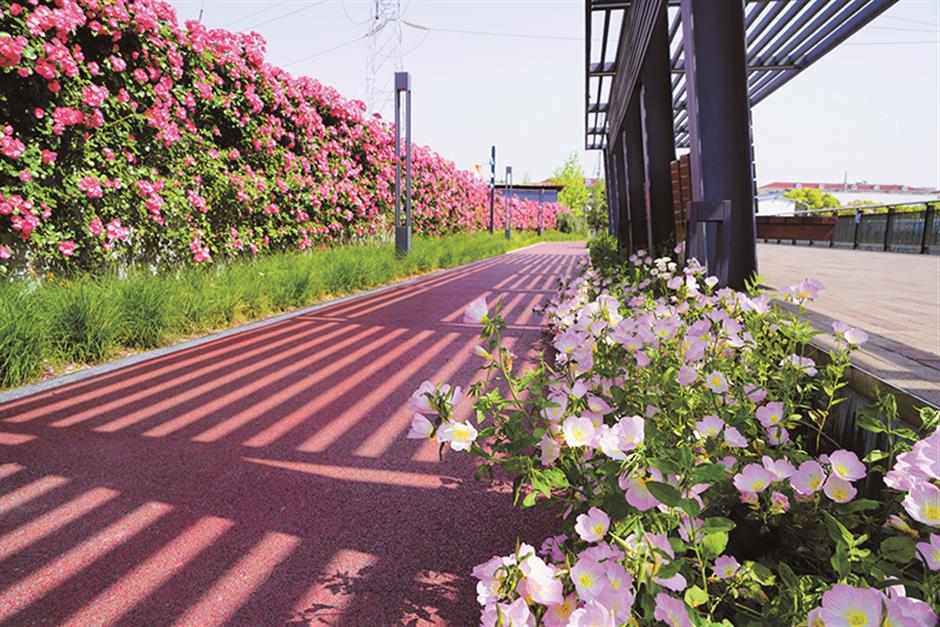 More than 5,000 Chinese roses are in full bloom in Baiyiqiao Park, attracting residents to come and have a look.

Between Lingshi and Wenshui roads, the park is tucked away on the banks of the Pengyuepu River, linked by the Jincheng Road pedestrian bridge.

It features metasequoia trees and "little bunny" fountain grass. It is also has jogging paths, riverfront platforms and a children's playground. A new children's service center opened on 710 Changping Road in the Jiangning Road subdistrict on June 1 in celebration of the International Children's Day. Meanwhile, a red-themed event was held for children.

Children played the role of soldiers of the Red Army and experienced how they fought enemies, such as crossing landmine-buried land and sending secret information, in interactive games. They also heard stories of researchers developing China's first atomic and hydrogen bombs and the first satellite. 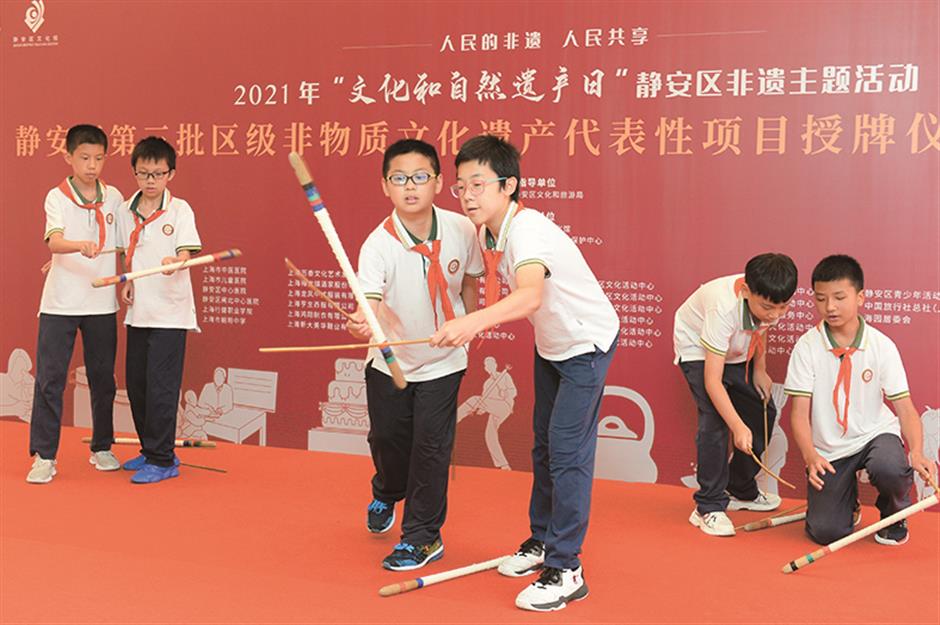 Jing'an Cultural Center displayed its intangible cultural heritage on China's annual Cultural and Natural Heritage Day, which was on June 12.

Cultural skill inheritors were at the scene to showcase how to make scented tea and gaofang, a herbal paste. A copy of a specially designed pankou (frog fastener) by renowned qipao (cheongsam) maker Longfeng was displayed.

The design, in the shape of the figure 100, was inspired by the centenary of the Communist Party of China.

Jing'an's iconic red sites, such as the former Shanghai residence of Mao Zedong on Maoming Road N. and the Memorial of the Second National Congress of the CPC, were embroidered on the first "1." Its historical landmarks such as Shanghai Exhibition Center and Jing'an Temple were embroidered on the first "0." Today's Jing'an, featuring the giant Ferris Wheel atop Joy City as well as the popular Modern Drama Valley, were presented on the second "0." 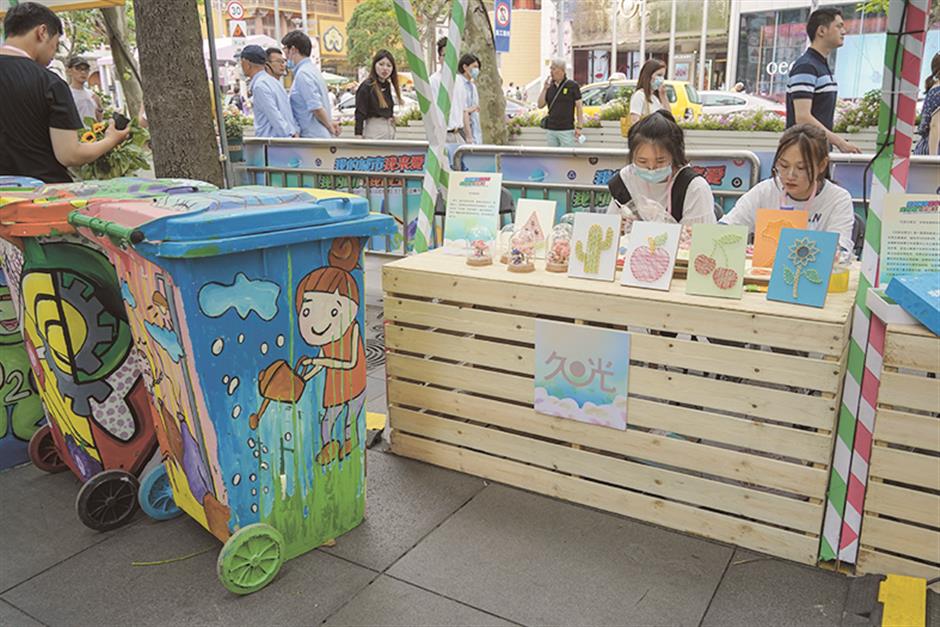 A green fair has opened outside Jing'an Park to promote waste sorting and environmentally friendly lifestyles.

The fair features litter bins painted with colorful graffiti and artworks made from old furniture, plastic tableware and recycled waste.

Students from Shanghai Huimin Middle School displayed a self-developed garbage-sorting board game, inspired by classic board games such as Monopoly.

Experts from the Innovation Academy for Microsatellites of the Chinese Academy of Sciences displayed a model of a carbon dioxide observatory satellite and explained carbon neutrality and peak carbon emissions.

At the fair, Didi bike donated sneakers made from old tires to local sanitation workers in the Jing'ansi subdistrict. Bright Dairy allowed people to swap waste milk boxes for yogurt. 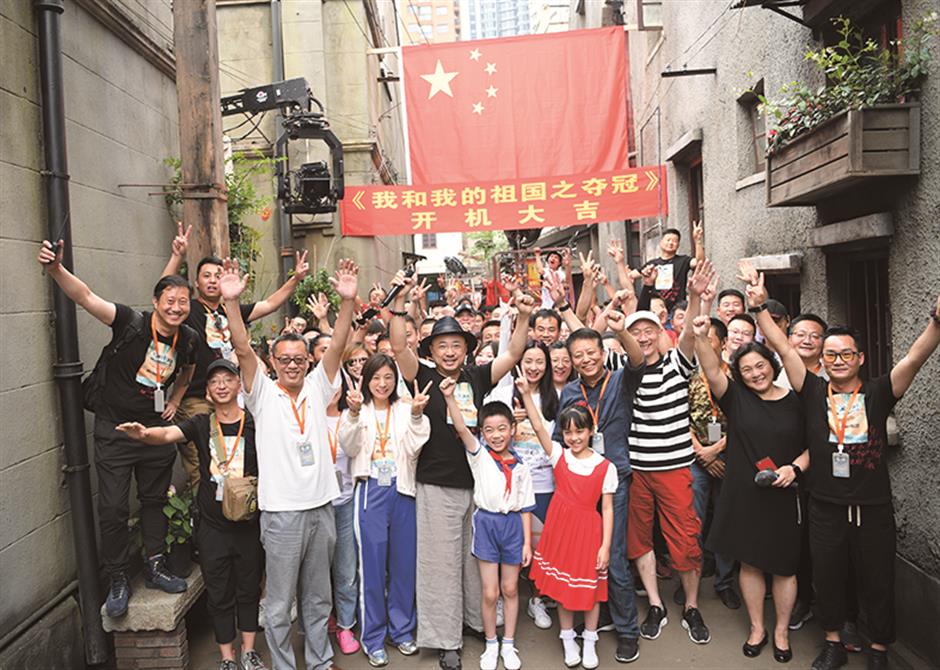 Jing'an has released a set of new measures to promote its film and eSports industries.

Leading filmmaking companies and eSports clubs will be granted up to 3 million yuan (US$463,347) of financial aid if they open businesses in Jing'an and another 1.5 million yuan for rent and workplace renovations.

Property owners who renovate spaces as film industry parks or eSports venues will obtain up to 10 million yuan at a time. People who engage in developing cutting-edge technologies to support filmmaking or eSports industries will get up to 3 million yuan.

Under the agreement, they will partner to build a film-industry incubator and produce local works to support the district's quest to become Shanghai's core filmmaking area.

According to the Jing'an Culture and Tourism Bureau, the district had supported and fostered nearly 100 film and eSports companies between 2017 and 2020. A total of 610 families living on Lane 121, 155 and 157, Tanjiaqiao Road have finally said goodbye to their old shabby houses.

A resident surnamed Sun woke up very early in the morning as she was too excited to fall asleep. She wore makeup and a red cheongsam to celebrate the big day for the family.

"We don't have separate toilet and bathroom. And our family is squeezed in an 18.9-square-meter unit on the first floor," she said. "But three years later, we will move back to a modern 50-square-meter flat."

The houses were built in the 1950s, and over years they have become dilapidated and inconvenient for the residents. To improve their living conditions, the district government decided to launch an overhaul.

The houses will be pulled down, replaced by one eight-floor building and three high-rises between 21 and 29 floors. The site will also have a day care center for elderly people, cultural and sports facilities, as well as neighborhood gardens.

After the construction is complete, in around three years, residents will move back to their new homes. 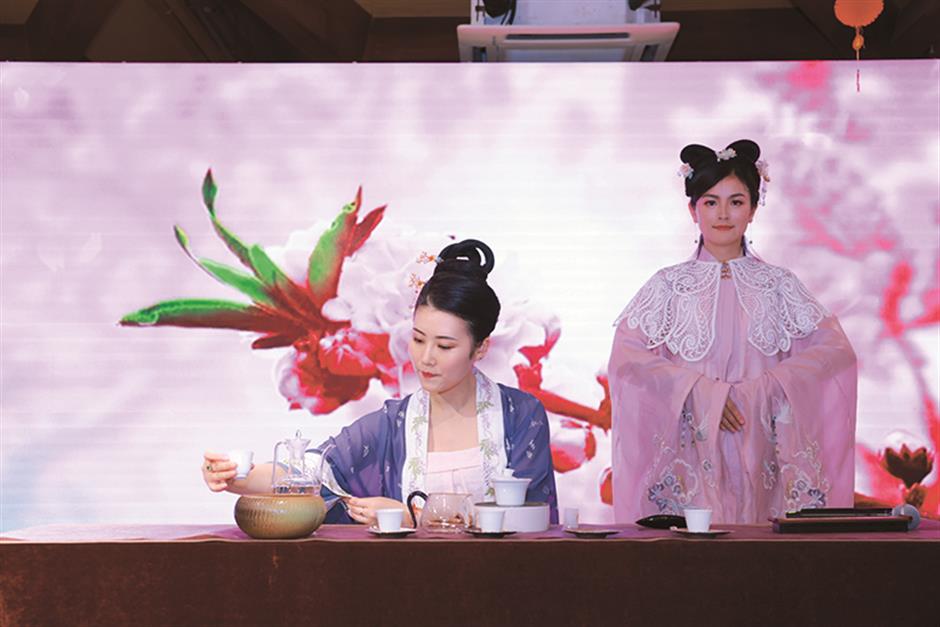 Compatriots from Taiwan were invited to celebrate the Dragon Boat Festival with locals in the Shimen No. 2 Road subdistrict. They sat together to enjoy hanfu (traditional Chinese costume) performances, and made zongzi (glutinous rice dumplings) and xiangnang (fragrant sachets).