The year 2021 marks the 100th anniversary of the founding of the Communist Party of China. While the whole country is celebrating the milestone, residents in Songjiang District are also getting involved to remember the past and pay homage to our forefathers who pulled us into the future.

Born into a military family, retired pediatrician Hu Xiaoyang, 68, embroidered, pasted and stitched a set of eight cloth paintings entitled "Faith" to recall her father Hu Daxiang, a Red Army soldier and CPC member who was a part of almost every important battle that laid the foundation for the People's Republic of China.

With recycled homespun, old jeans and garment trimmings, the cloth paintings follow the veteran's steps in chronological order, and unfold a picture of how the party blazed the trail and braved the waves.

"My father joined the Red Army at the age of 13, trekked in the Long March, almost died of typhoid fever when crossing the marshes and fought in four of the five 'anti-encirclement' campaigns in the Soviet areas of Hubei, Henan and Anhui Provinces," the daughter recalled. "He always had great faith and respect for the country and party even during his most difficult times."

The first embroidery work "Azalea" features large red patches, a symbol of the red soil lands of Jiangxi Province. A farmer is standing on tiptoes expecting the arrival of Red Army soldiers, who appear on the mountain top at dawn. The lyrics of the household folk song "Azalea" are carefully sewn stitch by stitch – "I'm waiting for the sunrise in the midnight, for the spring breeze in the freezing winter. When the whole mountain is clad with the red azaleas, it's the season to see the Red Army."

The second painting is dedicated to the Long March after the failure of the fifth "anti-encirclement" campaign, in which Kuomintang (KMT) troops with larger armies encircled the Communist strongholds and then crushed them. The Red Army had to relocate its base from China's southeast to northwest. It started the more than 10,000-kilometer historic trek, which crossed snow-capped mountains, rivers and drowning marshes.

Using green recycled homespun, Hu revived the scene when the Red Army was wading through the dangerous marsh between the Qinghai-Tibet Plateau and Sichuan Basin. Suffering from typhoid fever and dysentery, Hu's father couldn't go forward any longer. His comrades settled him in a small temple and left him some food, hoping he could be saved by the following troops. 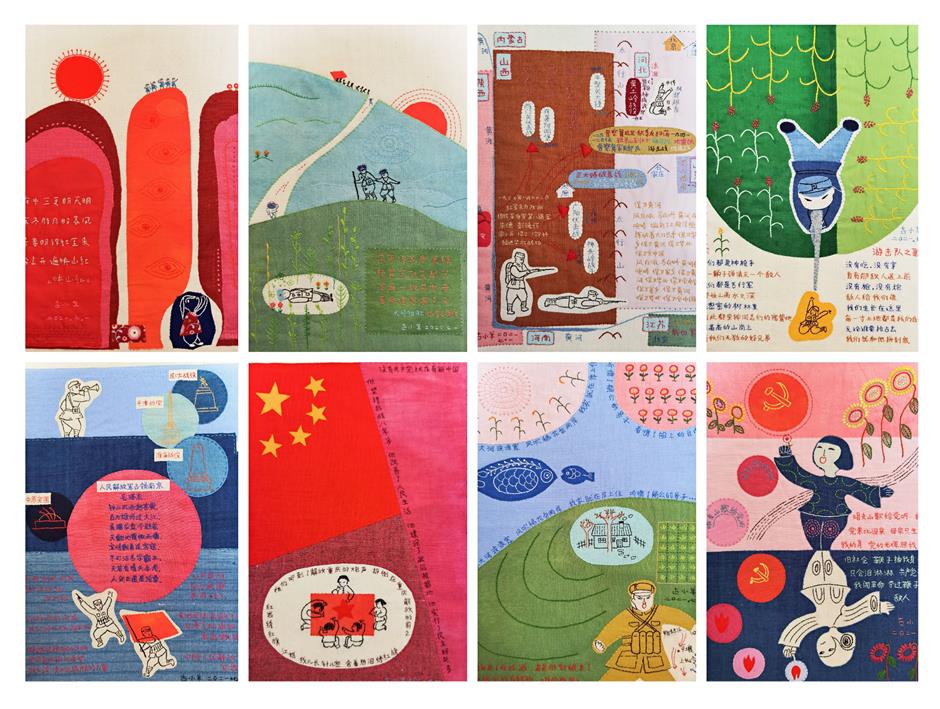 "Waking up from cold and hunger, he climbed out to drink water from the marsh. He hung on for several days and recovered a bit luckily, until the following troops arrived. He was only 18 years old at the time," the daughter said.

In the picture, she stitched his father, a young boy then, treading through the marsh with another soldier steadying him hand in hand. Not far away, a soldier rested in peace forever in the marsh.

The work "Defending the Yellow River" recalled the 10 most important victories of the People's Liberation Army, including the hard-fought "Hundred-Regiment Campaign" that Hu's father joined. Everyone in his company of about 100 soldiers was either dead or badly wounded, with only two surviving intact. "When the night fell, the two of us sneaked to the battleground and carried all the bodies back one by one to bury them," the father wrote in his memoirs. "When carrying them on my back, the blood of my comrades oozed out and ran all over me."

From the Anti-Japanese War to the Civil War, from the Long March to the inauguration of the People's Republic of China, Hu's embroidery works feature some of the historic events that reflect the way the CPC persevered, full of twists and turns, glory and pride. "I dedicated all of myself to this work. It's my way to remember my father and show respect to our forebears who pulled us into the future. We'll continue to follow them," she said.

Li Zhongxiang, 70, pays tribute to the CPC with a house of red-themed mementos collected over the past three decades. Stepping into his home in the Yueyang Community is like venturing into a mini museum, which showcases a wide array of old books, posters, receipts and badges of Chairman Mao Zedong.

"My generation has a special attachment to the CPC and high respect for Mao, which today's people might not understand," Li said, a 30-year CPC party member.

His collection of Mao's badges varies in materials, such as gold, bronze, bamboo, plastic and aluminum; shapes, including round, square and oval; and sizes that depict the leader at different ages and assorted poses.

One of the most precious is the pure gold badge of Mao made by Shanghai Yayi Gold Factory that weighs 3.9 grams and is 18mm in diameter. Only 300 badges were issued around the country at the time.

Li boasts a rich collection of Quotations from Chairman Mao in initial publications, of simplified or full versions, from different publishing houses, with translated volumes in English, Russian, French and Japanese. He even has the country's smallest version, as tiny as a matchbox.

It's been a weekly routine for Li to visit the flea market at Yu Temple in downtown Songjiang every Monday morning. "Sometimes I haggle, and sometimes I buy at any cost," he said. The most expensive item he has splurged on is a set of Selected Works of Mao published in 1951, which cost him 5,000 yuan (US$770). "But the value has soared by 10 times," he said proudly.

He often thumbs through old pages to review chapters he has already committed to memory – perhaps a way for him to shuttle back to his younger days full of passion and dynamics.

In addition, he has kept hundreds of old receipts that note contributions Songjiang locals made to the country. One receipt from 1950 shows that a man named Tang Shaoyu donated 5,000 yuan to the Songjiang Disaster Relief Institution, while another from 1951 recorded a students' union donation of 270,000 yuan to support the frontline of the Korean War. What's interesting is that 5,000 yuan at that time is worth 0.5 yuan today.

The man doesn't smoke or play mahjong. Collecting is his only hobby, which gives him immeasurable joy. "I won't sell them. I'll donate them all one day," he said.

With clean cuts and smooth lines, paper-cut artist Ye Laiying of the Fangsong community carves out her loving heart to the CPC in traditional artworks.

She designs and cuts the paper works with elements of the Party and national flags, the number 100 and historic events. She's also been invited to be a guest teacher to local residents and CPC members.

"When intangible heritage meets red culture, and the folk handicraft combines the party's pioneering spirit, it sparks new ideas for me," she said. 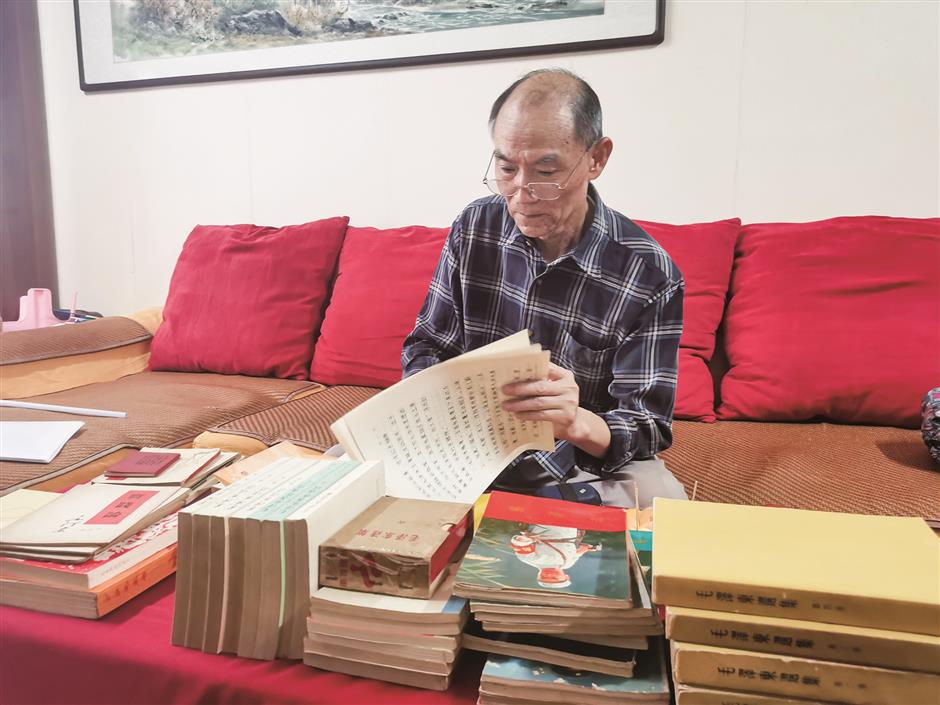 Li Zhongxiang pays tribute to the CPC with a house of red-themed mementos collected over the past three decades.

﻿
Special Reports
﻿
61771
,
62424
,
Discover the thrills and spills of life under the sailing mast
Expressing the order and rhythm of space in ceramics
Don't like your nose? Try musical makeover
Lancôme mines longevity science for next generation skincare
You can enjoy a ski run in the city, even if the snow isn't real
Robots prepare to take over local stadium
All keyed up to pursue multitude of talents
Onitsuka Tiger unveils retro-inspired fall/winter collections
SMHC makes specialty mooncakes to raise mental health awareness
Reduce your carbon footprint and step up for low-carbon living in Shanghai
EXPLORE SHINE