Time for a last bite of Tilanqiao's treasured snacks and flavors

Residents in Tilanqiao area around the North Bund are moving on to new lives under the city's relocation campaign. However, some famous, traditional old shops have lingered, along with their memories of the past.

Fiona Li (left) poses with Coco Zhang, who grew up in Tilanqiao area, in front of Weimin Snack Shop.

"The guotie (fried dumplings) of Weimin Snack Shop is one of the things I have missed most after I left," said Zhang Kunlin, a 68-year-old resident who lived in the neighborhood.

The 30-year-old snack shop is in its last week of operation. Although Zhang has moved away, he still visits the outlet by bus every morning for a fresh and hot fried dumplings. 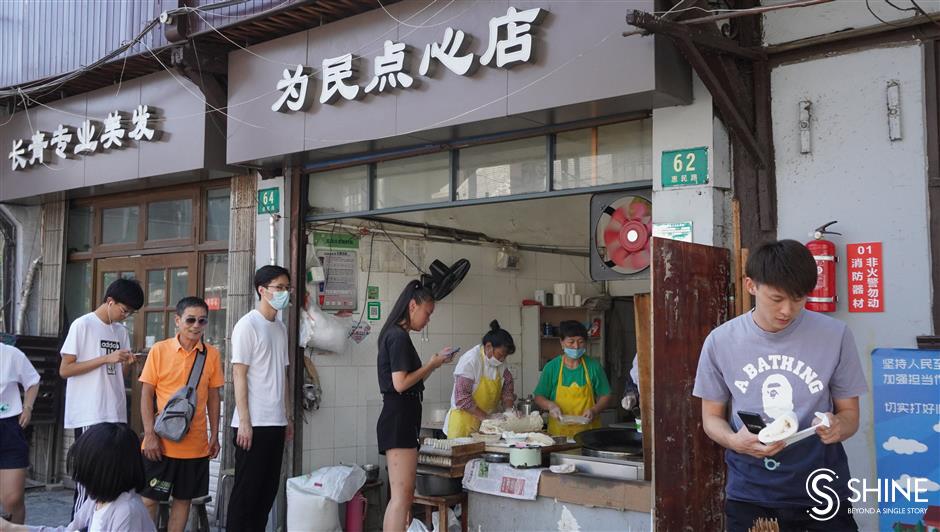 There is always a long queue outside Weimin Snack Shop every morning.

In Chinese, weimin literally means "for people," and that's the exact description of this yummy, inexpensive, down-to-earth snack shop.

There are only three choices on the menu – guotie, clear soup and beef soup.

The guotie from Weimin Snack Shop has always been a good breakfast choice. The skin of the fried dumplings is thin, and the bottom is flaky and crispy. The meat inside is tender and juicy. No wonder customers would wait in line for half an hour to buy some.

Despite the high temperatures, customers sit on small stools by the street enjoying their guotie, just as it was 30 years ago.

"The fillings of fresh pork, not frozen, give it an authentic juicy taste," Zhang said. "The flavor of the fried dumplings is the same as 30 years ago, which can rarely be found in the city now." 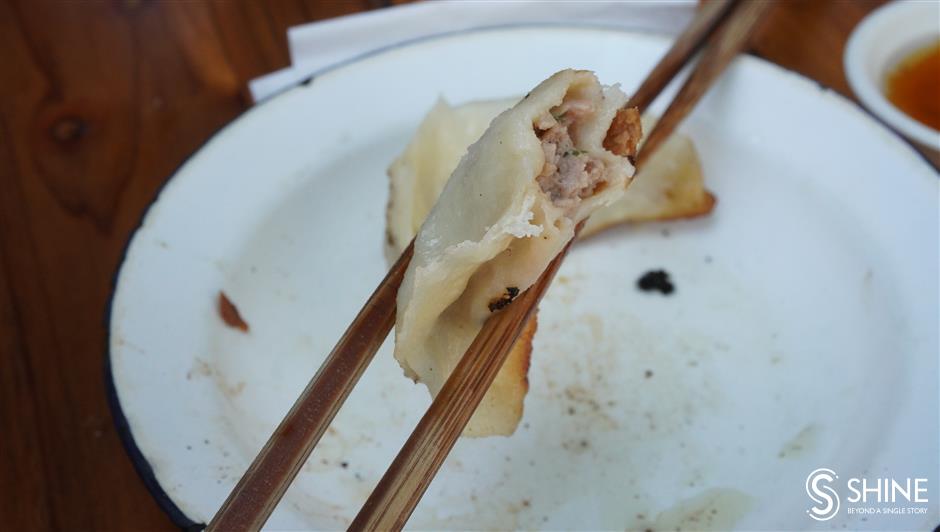 The filling of fresh pork holds onto the traditional juicy taste. 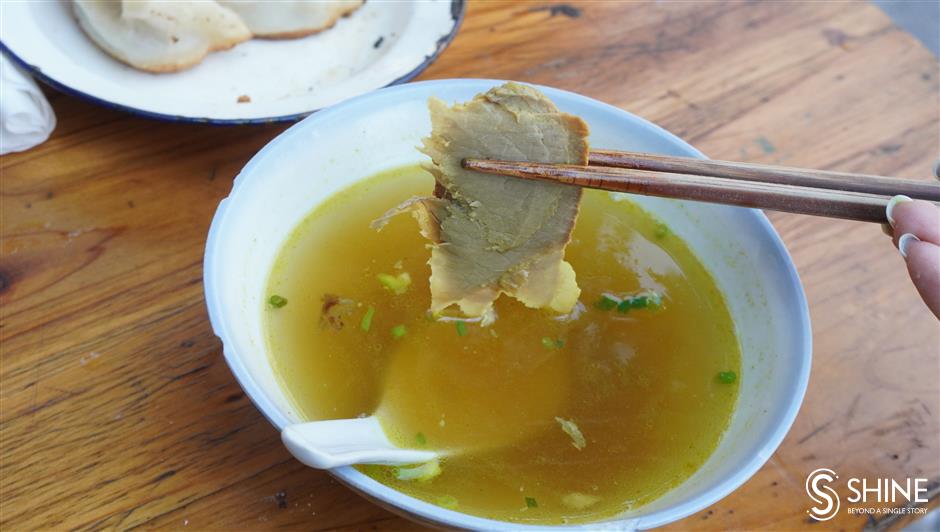 Curry-flavored beef soup with a few slices of beef is priced at only 5 yuan.

A bowl of hot soup and guotie are a perfect match.

A better choice is the 5-yuan curry-flavored beef soup, with a few slices of beef.

The snack shop announced it would close on July 23 in an eye-catching notice on the wall.

Owner Chi Lanying says regular customers ask every day "Where will you move to?"

"We will reopen soon," Chi said while frying the dumplings.

"Our opening hours are the most difficult challenge in finding a new location. As a traditional breakfast shop, we must be open at 6am, so we cannot move into a shopping mall. There are less street shops in the city center."

"But I'll do my best, to keep the shop and the authentic flavor of the guotie," Chi added. 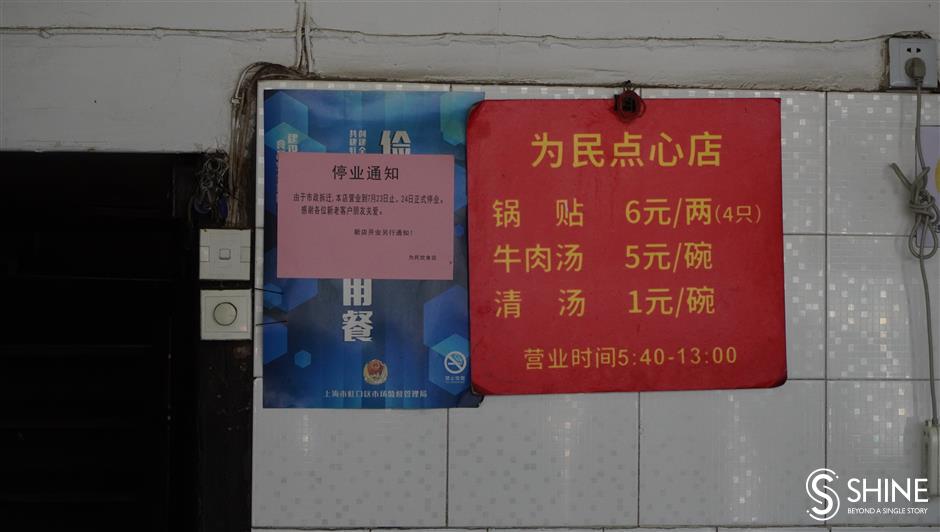 The closing day is announced on a eye-catching notice on the wall.

Locals would definitely come up with the name "Auntie Bian's Milk Tea" when asked about the most popular milk tea shop in the Tilanqiao area. The small 30-year-old shop has grown with the locals from a little cart and become a hot attraction for tourists.

As the prototype of many copycat "Auntie's Milk Tea" outlets all over Shanghai (even spreading abroad to New York), Auntie Bian's Milk Tea is famous for its specialty – combining purple sticky rice with milk tea for a drink with a special texture and taste. 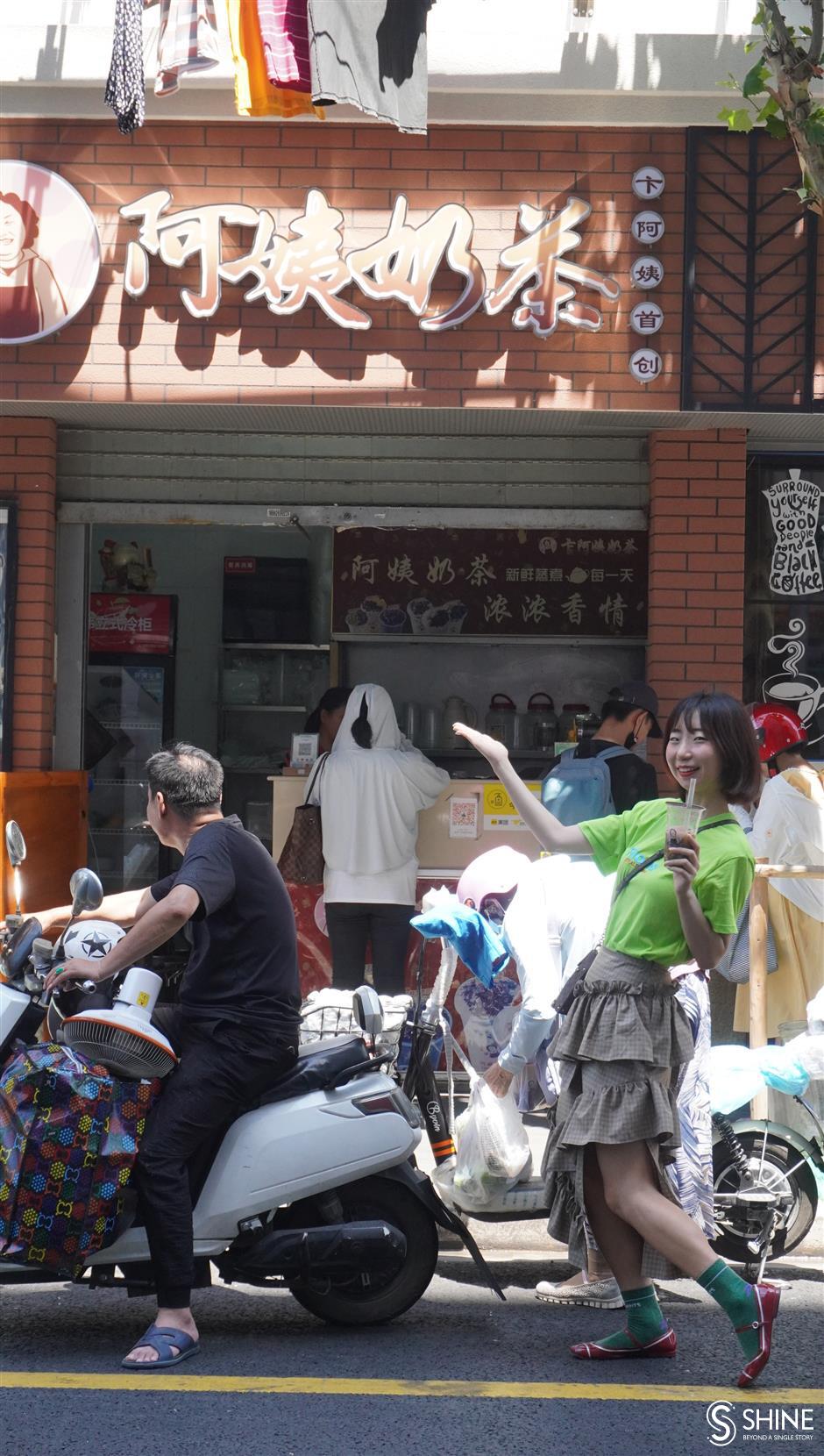 Very different in appearance and taste, it is a mixture of ordinary milk tea and purple sticky rice, a purple/black-colored glutinous rice which tastes sticky and a little bit sweet, very similar to corn or wheat.

Compared with normal rice, the purple sticky rice is harder and chewier, making it an ideal ingredient for milk tea. Auntie Bian, owner of the shop, created the recipe. Thus, you can hardly find any other milk tea shops that offer such a combination. 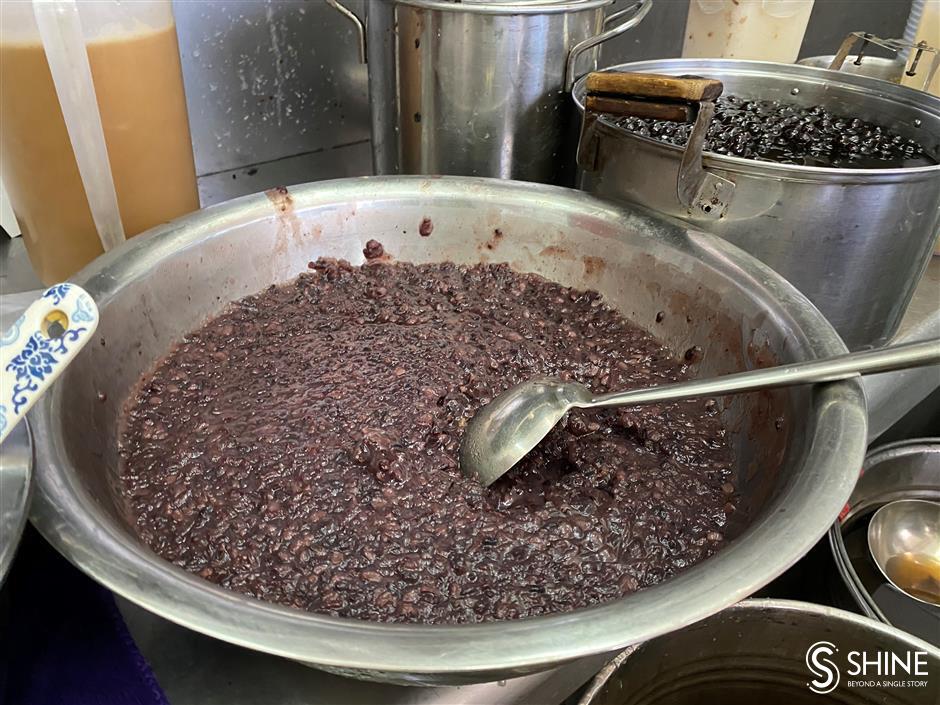 But July 15 was the last trading day of the milk tea shop at 82 Huoshan Road, and a flood of customers formed a long queue in front.

"It's not only a classic flavor, but also the memory of my childhood," said Coco Zhang, a neighbor of Aunty Bian who grew up in the block.

In the 2000s, pearl milk tea became popular in Shanghai. So when Bian put the milk tea and her purple glutinous rice porridge together, the creative mixture attracted a lot of young neighborhood customers and soon became famous throughout the city. 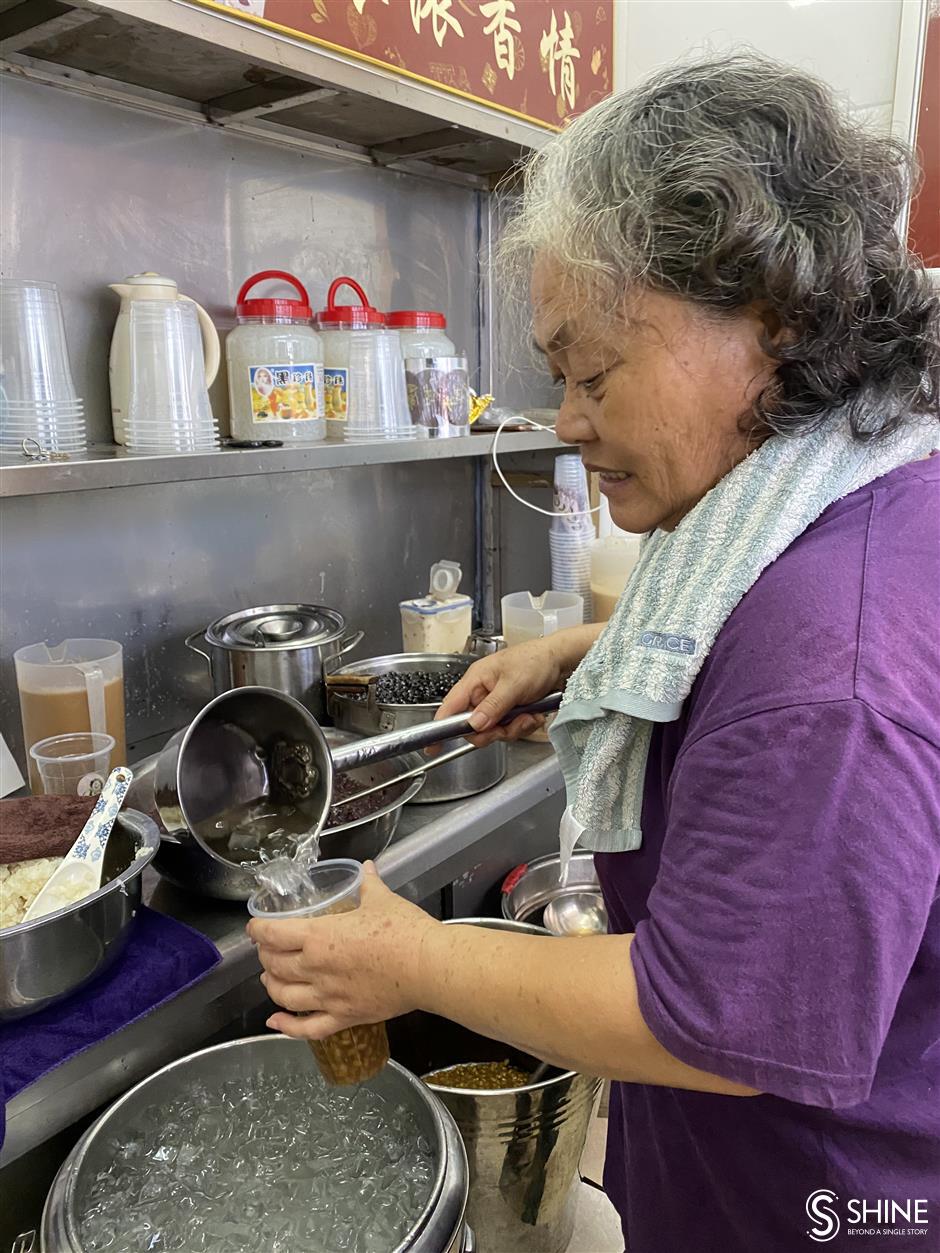 Today, there are over 50 items on Auntie Bian's menu, including sweet mung bean soup, a typical summer food that is refreshing and palatable, and is recommended with the added sticky rice.

"I'm going to take some time off, then reopen the shop," said Bian. "The city is renewing everyday, but the classic flavors will pass on." 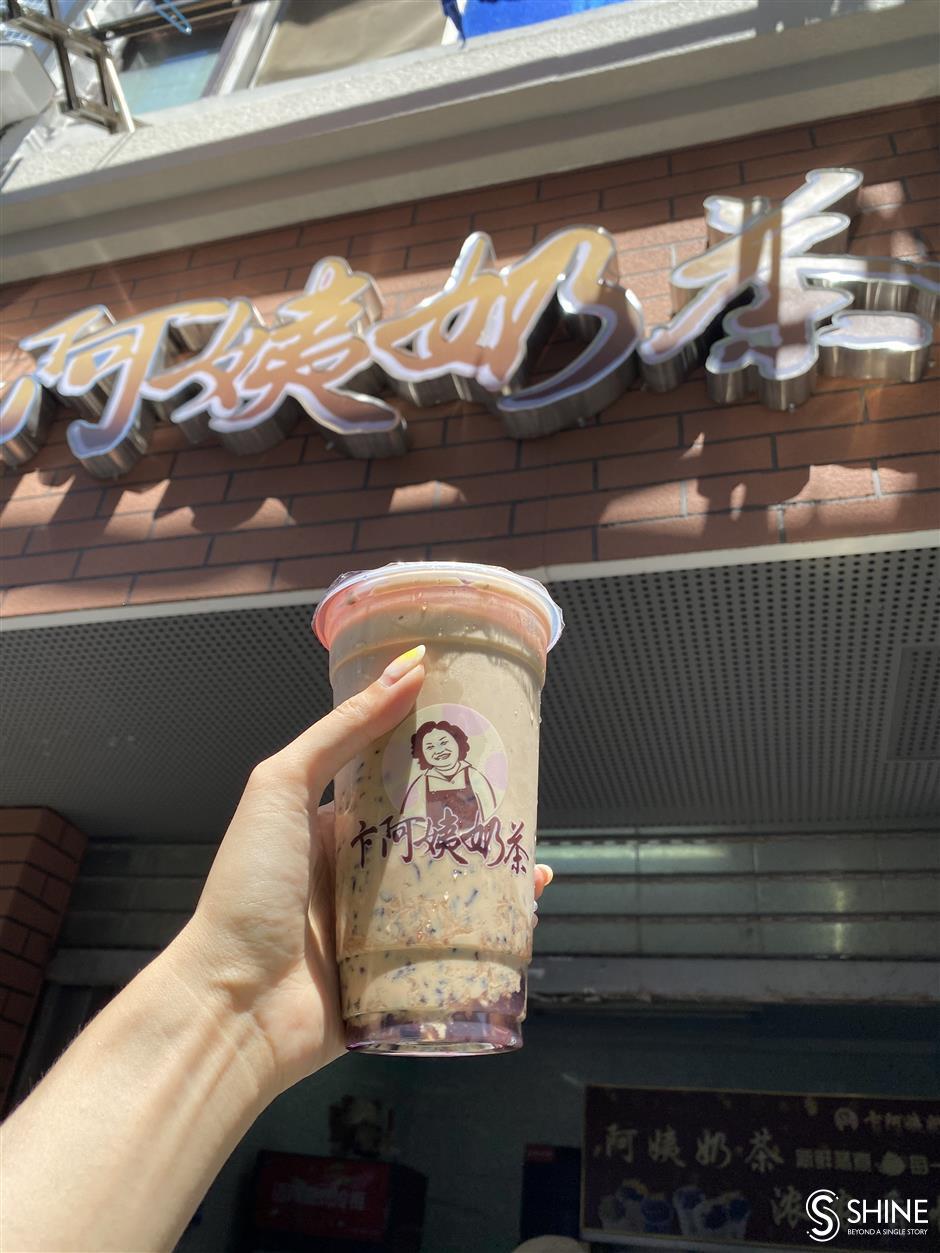 Special Reports
﻿
61908
,
Discover the thrills and spills of life under the sailing mast
Expressing the order and rhythm of space in ceramics
Don't like your nose? Try musical makeover
Lancôme mines longevity science for next generation skincare
You can enjoy a ski run in the city, even if the snow isn't real
Robots prepare to take over local stadium
All keyed up to pursue multitude of talents
Onitsuka Tiger unveils retro-inspired fall/winter collections
SMHC makes specialty mooncakes to raise mental health awareness
Reduce your carbon footprint and step up for low-carbon living in Shanghai
EXPLORE SHINE