Haven't a clue what to read? Grab a mystery!

A bookstore may die. Whodunit? "Maybe one day I will write a novel on the bookstore, with the title 'The Isolated Island Bookstore Murder,'" says Shi Chen.

Shi, 34, who has authored more than 10 mysteries, opened the Isolated Island Bookstore in Shanghai three months ago, hoping to share his love of detective fiction with others. It's the only bookshop in the city specializing in the genre. 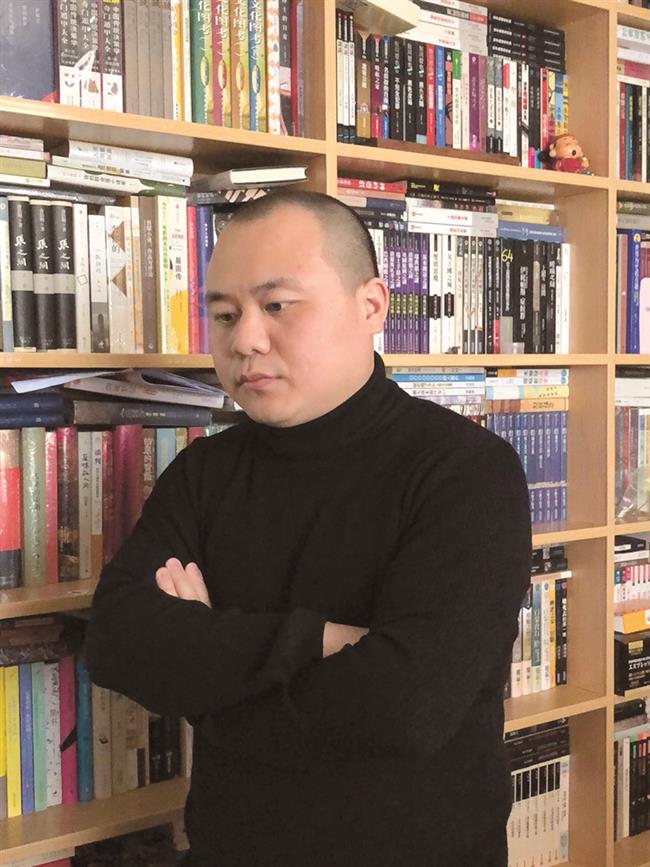 Shi Chen, founder of the bookstore, is a detective novel author himself.

After an initial burst of public interest, the shop has seen dwindling sales. Shi admits he's not sure if he can keep the endeavor going.

He named the shop after a typical mystery story setting – the isolated venue where people are stranded and one of them is a murderer. British crime queen Agatha Christie (1890-1976) is believed to have been the first to introduce the story model in her masterpiece "And Then There Where None."

Shi's shop is located deep inside a lane on the corner of Nanchang Road and Ruijin No. 2 Road in Huangpu District. Its white facade and green-and-white-stripe rain canopy over the door look cozy in contrast to the books inside specializing in murder and mayhem. 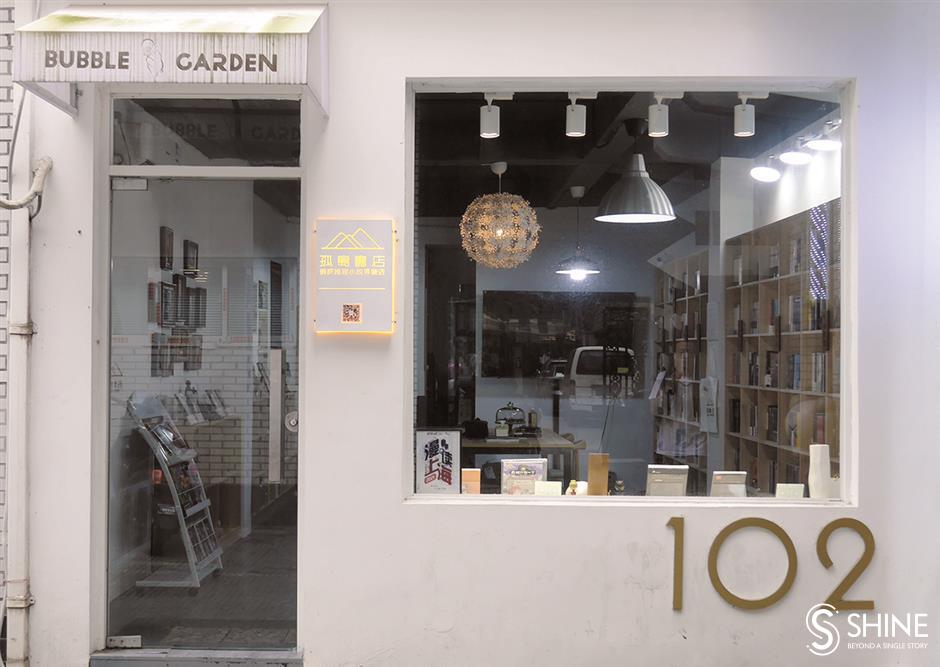 The bookstore is hidden deep in a lane in downtown Huangpu District.

Upon entering, customers are greeted with the shape of a body outlined by white tape on the floor, mimicking a crime scene. Shelves stacked with books, including the owner's own titles, cover two shop walls. Most of the titles are Chinese translations of foreign books. There is also a long table used for activities such as lectures. Other than that, the store is quite plain.

It started out with great promise.

"On the first several days after opening, customers swarmed in," Shi says. "But I knew the numbers would dwindle in following weeks, once the newness of the shop wore off. My goal has been to keep the store afloat for as long as possible."

The books are very carefully organized according to different types of detective novels. There's the section on European and American classics where Sherlock Holmes mysteries are shelved.

There's a section on "social criticism, featuring mysteries cloaked in exposés of social problems like poverty, discrimination or injustice. That genre is exemplified by Henning Mankell, a left-wing Swedish social activist who frequently built his plots around themes like anti-immigration bigotry in his popular Kurt Wallander mystery series.

And there is a section in the shop reserved for mystery "thrillers," with books like Dan Brown's popular "Da Vinci Code."

"Most customers are fans of detective novels, but others are more casual readers," Shi says. "They may have heard the names of an author or two, but they really don't know, for example, how a honkaku novel differs from others. I explain it to them using the example of the Japanese manga series 'Detective Conan,' which almost everybody knows. In the early years 'Detective Conan' involved a lot of honkaku detective stories."

That genre, which first emerged in Japan in the 1920s, involves fiendishly clever and complex plots, such murder committed in a locked room, where detectives have to use extraordinary powers of logic to solve a crime.

Books sold in the Isolated Island Bookstore are carefully catalogued according to different sub-genres of detective stories.

Shi is somewhat of an expert on the evolution of the detective novel.

American writer Edgar Allan Poe (1809-49) is generally credited with authoring the first detective story – "Murders in the Rue Morgue" published in 1841. It is also believed to have been the first "locked-room" murder tale.

Conan Doyle created the orthodox detective story model with his Sherlock Holmes series in late 19th century. The core of the stories was the use of astute observation and deduction to solve crimes that seemed to defy logic.

In early 20th century, Agatha Christie, Ellery Queen, John Dickson Carr, Dorothy Sayers and other authors presided over what has come to be called the "golden age of detective fiction."

Such "orthodox" novels, however, evolved into many branches over time. Japan enjoyed a "second generation" of detective fiction in the 1980s. "The Tokyo Zodiac Murders," written by Soji Shimada, inspired a great number of authors to spin honkaku stories. In the West, detective novels frequently veered off into the thriller category, filled with serial killers, espionage and mysticism.

Shi has been a detective novel fan since childhood, when he read almost all the European and American masterpieces. As he grew older, Japanese honkaku mystery authors became his favorites.

So what attracts readers of detective novels? Sometimes it's just the game of trying to sift through the "red herrings" and discover the killer before all is revealed in the end. Other times, it's the eccentricities of the sleuths – Christie's busybody Miss Marple and fastidious Hercule Poirot, Sayers' blueblood Peter Wimsey, Raymond Chandler's hard-boiled Philip Marlowe or Rex Stout's Nero Wolfe, who is so fat he rarely leaves his armchair except to tend to his collection of rare orchids.

Many foreign crime writers have tapped China as a backdrop for their stories or characters. Earl Der Biggers created the enduring character of Charlie Chan, a detective working in Honolulu. 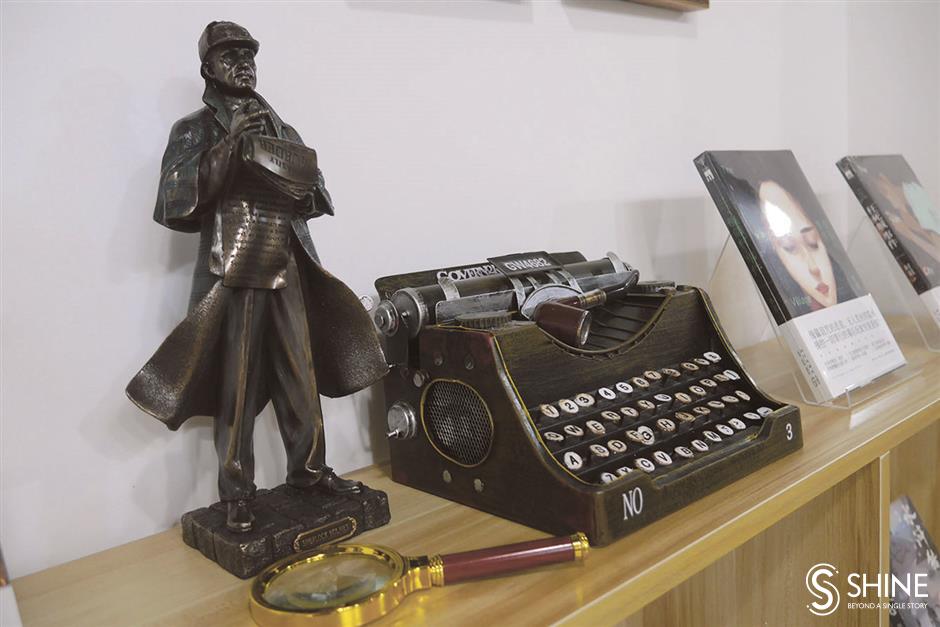 Shi's detective novel-related collections are on display in the store.

But what about Chinese writers of crime fiction? There are some of note that can be found on bookshelves around the world. Qiu Xialong, now living in America, created detective Chen Chao of the Shanghai police. He Jiahong, a lawyer who teaches at Renmin University in Beijing, wrote the popular "Crime of Blood," among other detective fiction.

Shi has set aside a corner of his bookshop for domestic writers, but as a published author himself, he admits that most remain pretty obscure.

He wrote his first mystery novel in university. It was about a serial killer on campus.

"I chose a background that was the most familiar to me," he explains.

After graduation, he realized he couldn't support himself merely by writing, so it became an after-hours passion. After the coronavirus pandemic broke out, he quit his job in new media development and opened the bookstore.

The most popular of his works is a honkaku mystery series featuring a mathematician-cum-detective named Chen Jue. The series includes six full-length novels and five short stories.

However, Shi says such orthodox detective stories aren't as popular as those enveloped in "social criticism."

"Even I, as a hard-core honkaku fan, sometimes write social criticism stories, too, because they do sell better," he says. "You can see the trend. The best-selling local detective stories are those that have been adapted into movies or online series. And what they sell is the emotional resonance evoked by their characters rather than tricks and puzzle solving."

Shi reckons that readers are always more critical of local writers than foreign ones.

"If you, say, read an award-winning Japanese detective novel and find it mediocre, you might think it's your problem," he explains. "But if you read something of a similar quality from a little-known writer, you will probably think: 'Well, it's just that bad as I expected!' Still, we need to give space on the shelves to young, local writers to help them develop."

Shi watches closely the behavior of the costumers, like a detective poring over forensic evidence. He weaves their stories into his "little gray cells."

Some people come in, praise the bookstore and tell Shi to "keep going," then walk out.

"Hey, if you really want to support the shop how about buying a book before leaving?" his thinks to himself.

The books in his shop are relatively costlier than other sales channels, which may deter purchases.

Some who come into the shop have apparently read Shi's books but are too shy to engage him in discussion about them. He watches them standing in front of his books, chatting and glancing at him from time to time, but they never say anything and eventually leave.

And then there are those who come into the shop, ignore the books altogether and sit by the window burying their noses in their smartphones.

"It is really interesting to watch how different people interact with me, with the books and with each other," he says, harking back to his imagined new work "The Isolated Island Bookstore Murder."