Train cars become windows on the natural beauty of China

A train is like a small world moving through a larger world. Award-winning Chinese photographer Chu Weimin captures them both.

After taking the grand prize in the 2019 National Geographic Travel Photo Contest with a riveting shot of a snow-covered Greenland fishing village bathed in the blue tint of dusk, Chu is now turning his lens to his motherland. 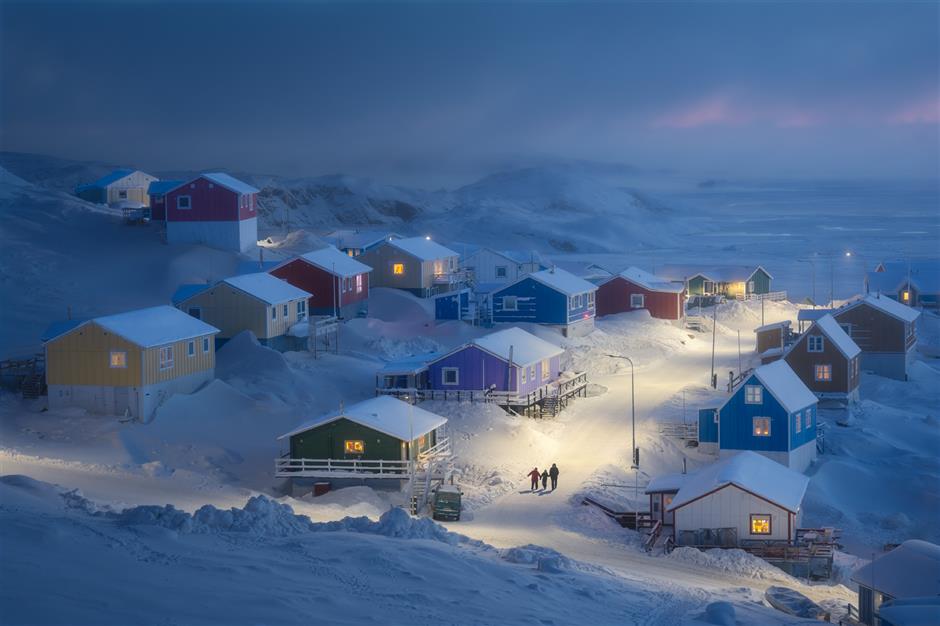 The picture of a Greenland village that won Chu Weimin the grand prize in the 2019 National Geographic Travel Photo Contest.

His recently published series "Looking at China Through Train Windows" juxtaposes the scenery outside train windows – mountains, steppes, forests and deserts – and the on-board experience of passengers: luggage piles, a cup of coffee on a little table and the silhouette of a man staring out a window.

The idea for the project occurred to Chu quite randomly when he was traveling to a commercial photography assignment last August. He was on a train between the cities of Xining and Golmud in the western high-desert province of Qinghai and found himself riveted by the views outside the train window.

"The natural view outside the window was both magnificent and desolate," he says. "There were some manmade facilities, such as quarries, factories and signal towers, which actually made the scenes look more impressive. That inspired me to do the project."

Famous scenery in China has traditionally been depicted in structured ink or watercolor art – a sea of clouds atop Huangshan Mountain, the karst mountains of Guilin, or even the skyline of Shanghai.

Chu says he always wanted to find a different way of portraying Chinese scenery. The train series gave him that opportunity. 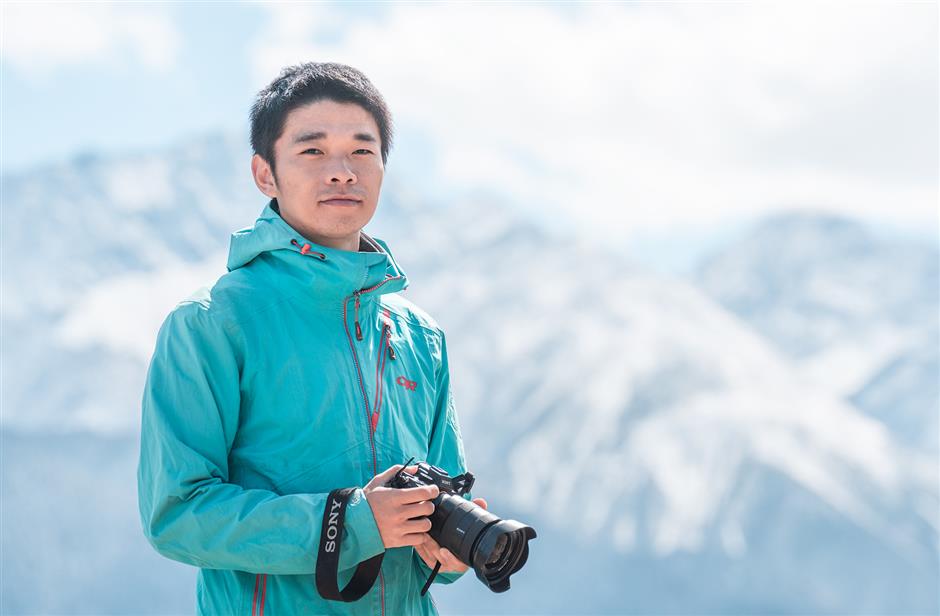 The project is still ongoing. Most of the photos already published were taken along the Qinghai-Tibet Railway that runs through remote western China.

For the past year, Chu has traveled the route at least 10 times. It's not easy to take photographs from a high-speed train.

"In the beginning, I wasn't familiar enough with the scenery and missed a lot of good photo opportunities, no matter how fast I tried to press the shutter," he says.

Modern technology proved to be Chu's best friend. When he missed a photo opportunity, he marked the exact spot on a GPS map so he would be better prepared on the next trip.

The finished pictures are actually compositions because it is impossible to shoot outside views clearly when the camera is some distance from the window when the train is moving. Reflections on the window glass also are a big problem.

"At first," Chu says, "I didn't think of including the inside of the train car in the pictures and just concentrated my lens on the window. But I realized later that you can't tell if the photos were taken from a train or a bus or even when walking outside. The pictures surely didn't look as impressive as I expected."

Chu did a lot of experimentation before discovering that photo composition was the solution, giving him the opportunity to combine the best scenes from both inside and outside the train car.

A photo of Cona Lake in the Tibet Autonomous Region is one example. As the train ran along the shore of the lake, Chu managed to take a shot of a bird flying over the water. However, Chu was in a hard berth sleeper car when taking the picture, and the triple bunk beds in the foreground made the shot look cramped. So the next time he was on the train, he booked a soft berth car with twin bunk beds and took a picture from the same angle when passing the same spot. That time, there was more space given to the view of the lake and a bird. 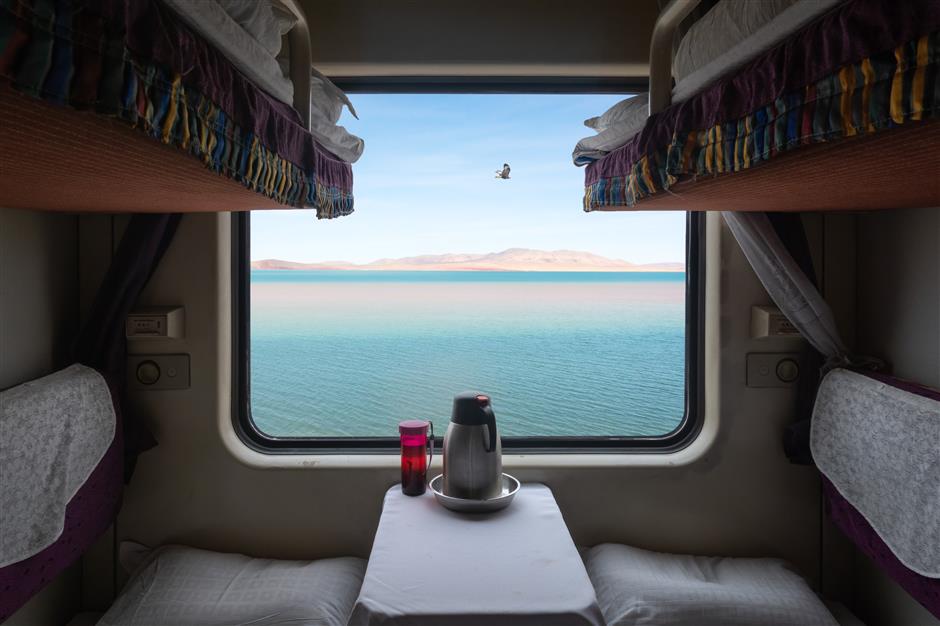 The picture is a manip that combines a photo of a bird flying over Cona Lake and the other of a soft berth train car.

One of Chu's favorites in the series is a vertical photo of suitcases piled under a train window. Beyond the luggage stack, the view outside the window shows a highway leading toward high mountains.

"The picture was taken on the Lhasa-Xigaze Railway in Tibet," he recalls. "The car was really crowded, so passengers had to put their luggage by the door. The whole picture captures the feeling of people longing for home." 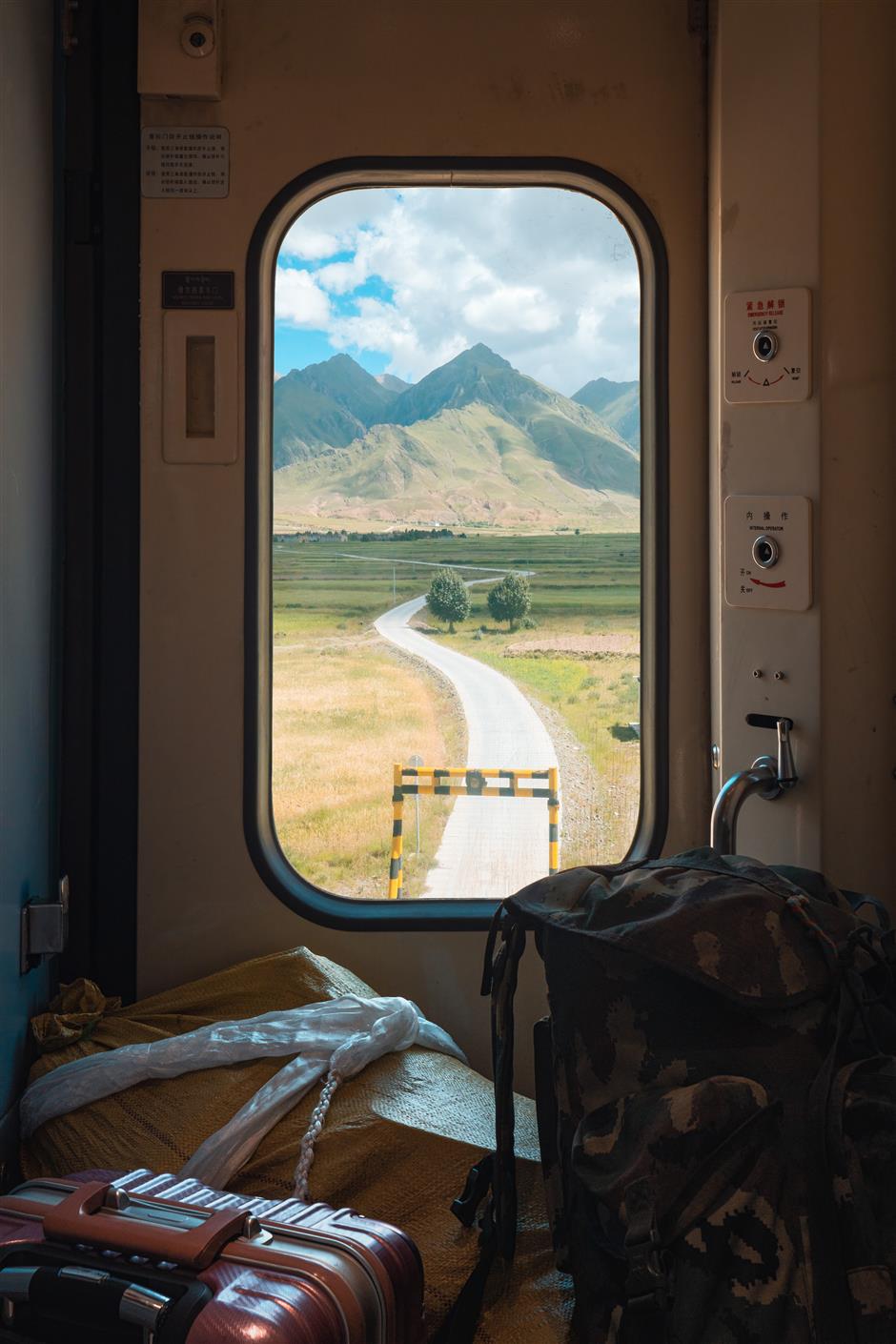 Taken in Xigaze in Tibet, this photo exudes a "country road, take me home" vibe that Chu loves.

Born in Chongqing, a metropolis in southwestern China, Chu studied computer science at Nanyang Technological University in Singapore with a full scholarship for his bachelor's degree. In 2011, he bought his first digital single-lens reflex camera. While an exchange student at the Technical University of Munich during his sophomore year, he took the opportunity to travel around Europe and photograph the scenery of the Alps. He became hooked on photography.

That passion was fueled by his selection as an "editor's choice" in the 2012 National Geographic Photo Contest. 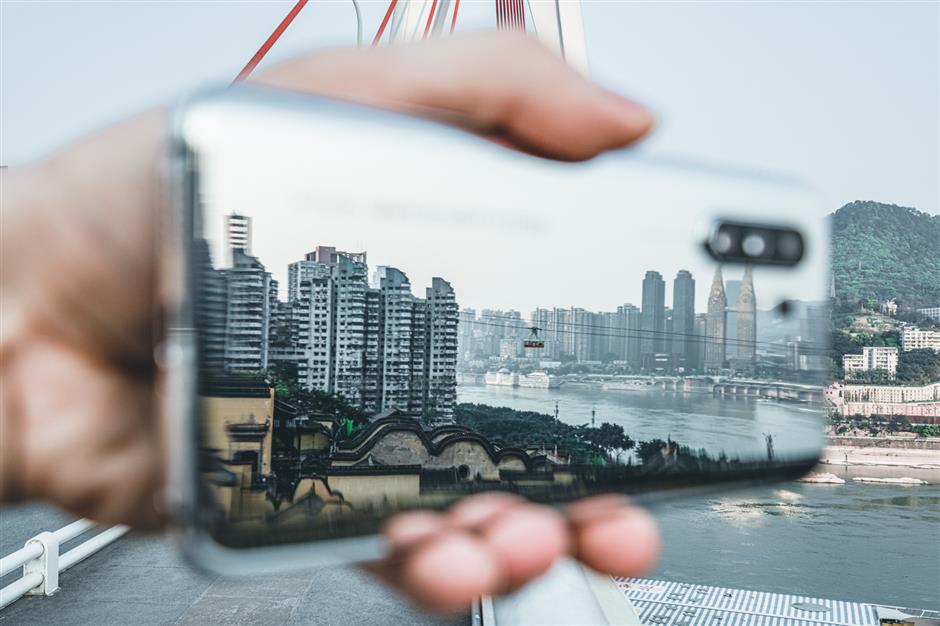 Chu was familiar with Chinese cities, but his trips on the Qinghai-Tibet Railway gave him a broader view of his homeland.

His pictures often show people working along the railway – an engineer taking a nap; a worker saluting the passing train.

"These people work in a very remote area with very difficult natural environment," Chu says. "Without their efforts, we wouldn't be able to see such beautiful scenes from a train," he says. "Seeing them warms the cockles of my heart."

The Tibetan antelope is one of Chu's. The antelope are very timid, so he was surprised on one trip to see a herd of them grazing near the railway. It seemed that passing train didn't bother them at all, but it was difficult to catch them on camera.

"The chance of catching them is as fleeting as a meteor, and their protective coloration makes it even harder to spot them," he says. "So far, I haven't managed to get a picture of them that satisfies me, but I will keep trying."

Chu started studying photography in college and mostly took pictures when he was traveling. He believes that the best way to take a good picture is to feel and watch the world and people around you intently.

"This is an era when information flows rapidly," he says. "When a place goes viral online, everyone rushes to the same scene to take photos. So what you need to do is take pictures that are different from others. That requires observation and drawing on the experiences of life."

Chu has just returned from a trip to Inner Mongolia, where he took pictures from a train of salt lakes and oases in the desert. When he was not on the train, he sometimes spent nights in herdsmen's homes and took more pictures.

But now he is turning his lens back to the Tibetan project. He reckons it will continue for years. There are so many places in the country for him to explore.

"I used to travel a lot by plane, but now the train is my first choice," he says. "Apart from the mountains and Gobi Desert in the west, there are infinite views of lakes, forests and snowy mountains across the country. It's an endless challenge."