Zhang Hong, a resident of the Chengzhongcheng complex on Yinggang Road, is a fan of line dancing. When weather permits, she joins the dance group with her neighbors for after-dinner relaxation.

In the past, she was concerned about there being no proper dancing area.

Now, she goes to Shangshan Square to dance.

"In the past, it was just a piece of idle land near my residential community. Now, it is an attraction with a waterfront sightseeing corridor, a music fountain and even a yachting dock," said Zhang.

The square is one of the landmark attractions of the water park circling Qingpu New City.

The first and second phases of the park have opened to the public. The unwalled park circles Qingpu New City like a jade belt, and its waterfront areas provide ideal places to satisfy the leisure demands of residents and tourists.

Water is the biggest resource of Qingpu District.

It once had many production facilities such as flour and cement mills, thermo electric plant and sandstone dock along major rivers such as Dianpu River and Shangda River in Qingpu New City, said Zhang Hao, vice general manager of Shanghai Qingpu New City Development (Group) Co Ltd, who participated in design of the water park project.

With urban construction, these facilities gradually lost their former production functions, he said.

"At the same time, the public has shown strong demand for leisure and fitness, and eliminating these plants, improving the waterfront environment and opening waterfront spaces to the public have responded to their needs," Zhang added. 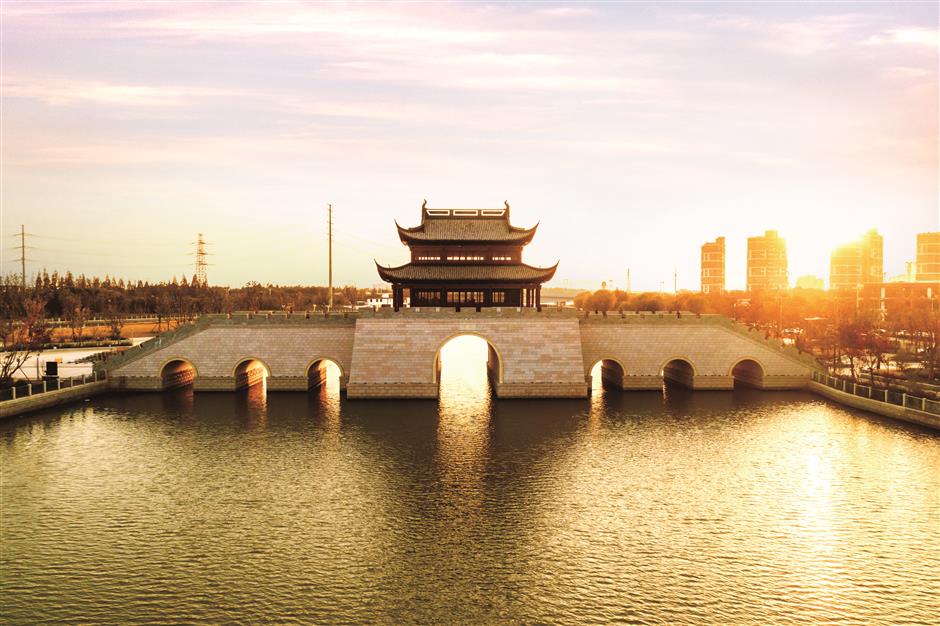 The Water City Gate in the water park has witnessed the profound culture of water and water transportation in Qingpu.

The research work for the project started as early as 2014.

The circular-shaped park is flexible and close to people's living areas. Rivers string nearby parks such as Guta Park and Songze Relics Park.

The park is the biggest lifestyle project of Qingpu District. The riverfront greenway totals 43 kilometers, and it has 3,000 mu (200 hectares) of waterfront space open to the public.

There are 35 leisure, sports and fitness venues and 18 docks, and it links a variety of popular attractions such as the Shangshan Square and Water City Gate.

The park incorporates the cultural essence of Qingpu District.

The Water City Gate from ancient times has been replicated in many other places, showing the district's profound culture of water and water transportation.

Qingpu laochengxiang, or "old town," had several gates stretching over a history of nearly 450 years.

Once upon a time when the land routes were not easy, the district even had a "water gate" when water transportation prospered, according to historic records.

In an article by Sun Shaozhen, a writer born in Qingpu, the old water gate walls of the district were described as "mottled and worn, covered by several hundred years' of ringworm."

The reconstruction of Water City Gate was put on the agenda as part of the water park project.

It has a two-story ancient Chinese-style gate tower of about 12 meters high, and the gate has become a landmark of the Dianpu River-Mengdie Island area of the water park.

Standing above Caogang River, the majestic gate takes people into the lived scenes of Qingpu laochengxiang in ancient times.

To the south of the Dianpu River is the Wanshou Pagoda which dates back nearly 300 years.

The Qingxi Academy once nestled on the right of the pagoda where refined scholars like Wang Chang and Yu Yue once taught students there.

The reconstruction of the academy was an important project of the second phase of the water park project.

"By rebuilding the Qingxi Academy, a historical building, we want to promote the culture of the district," said Xia Jian, manager of the planning and construction department of Shanghai Qingpu New City Development (Group) Co Ltd.

The third phase of the water park is scheduled to start construction within the year. The park is well on the way to become a true meeting point for future residents in Qingpu District.

﻿
Special Reports
﻿
62743
,
Water park enhances lifestyles through cultural essence
Rice offers food for thought in rural revitalization
Falling hook, line and sinker for a recreational sport
Train cars become windows on the natural beauty of China
Haven't a clue what to read? Grab a mystery!
Designs through observing how people create things
Chic apartment is journey through time and cultures
Professionals organize people's space outside and in
Walking the hills a labor of love for forest guard
Museum pays tribute to aviation heritage
EXPLORE SHINE