How to plan an immersive space trip in Shanghai? Just buy a ticket at the newly opened Shanghai Astronomy Museum.

As the largest in the world, the museum "creates a space" inside its exhibition hall to lead visitors on a tour around the solar system, faraway galaxies and even black holes. It also aims to understand the history of astronomy and inspire people to think about its future.

The three main displays "Home," "Cosmos" and "Odyssey"  take you deep into space and then back to earth.

iDEALShanghai checked out the museum on its opening day. Here's what we have found. 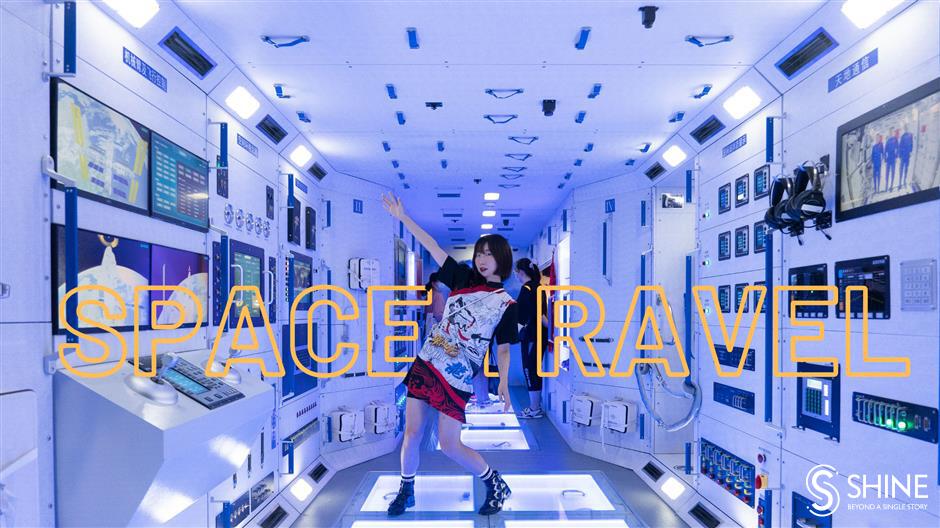 The immersive space trip starts with the "Home" exhibition. Entering through a dark tunnel, a 17-meter-in-diameter model of the Earth beaming out a pale blue light attracts you to walk in the solar system. You experience the past and present versions of the Earth, moon, sun and other planets as if you are on a spaceship, viewing the Earth from space.

The 17-meter-in-diameter model of the Earth is displayed in the museum, showing the past and present versions of the Earth.

Inside the "Earth" is a planetarium decorated as a lawn on a summer night – just lie down to enjoy a 9-minute video projected on the dome. The video starts every 15 minutes and shows different stories about the zodiac or some of the most iconic stars such as the Polar Star. The one I watched was about Chinese constellations. 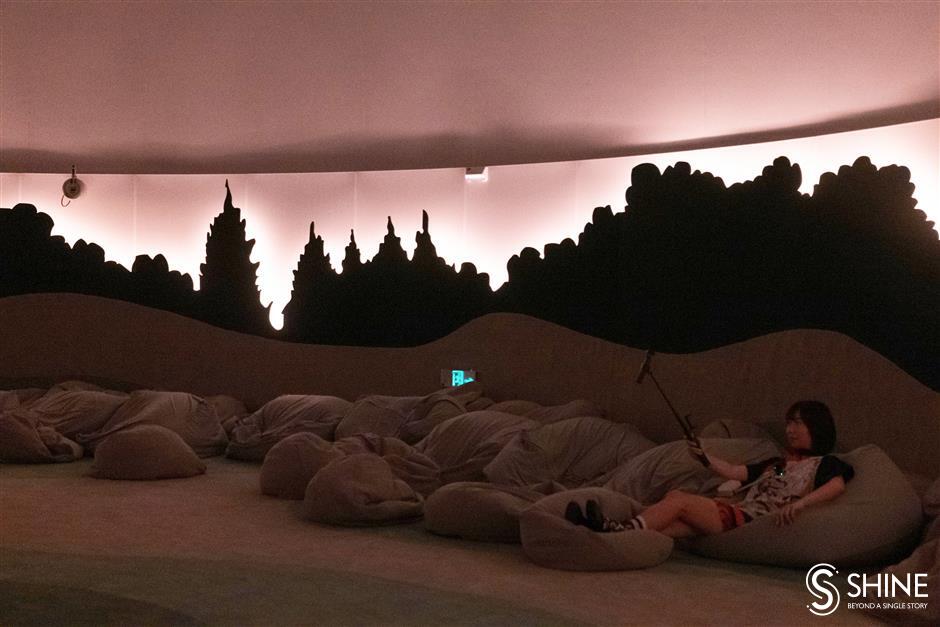 Fiona Li watches the video projected on the dome inside the "Earth."

Outside of the "Earth," a lot of novelty interactive experiences can be found.

They are all strange but amazing. 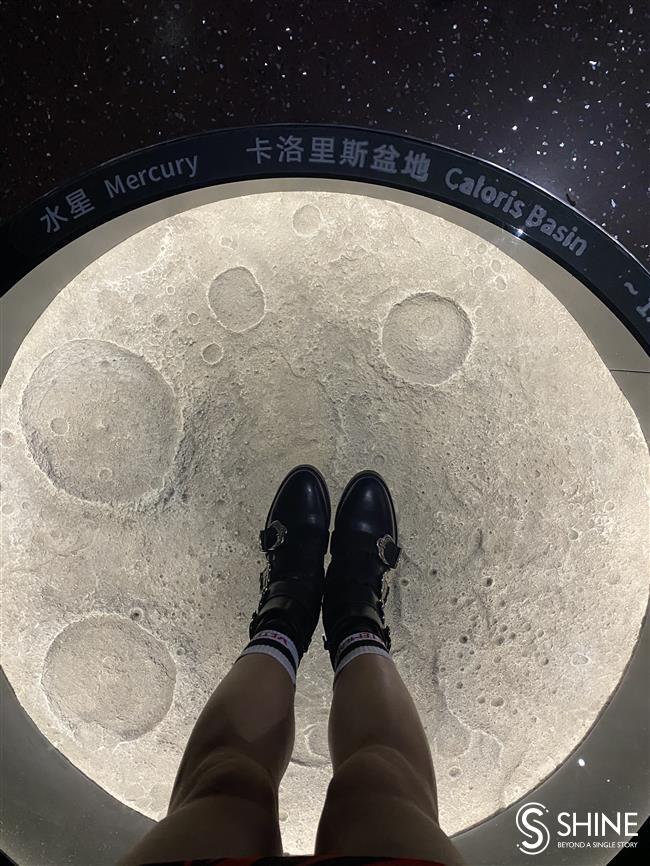 The surface of the Carolis Basin on Mercury

The second part is to check the weather on other planets – lightning storms on Venus, dust storms on Mars. They are so real when you stay close. Or you will be fascinated by the methane sea on Titan, which has the densest atmosphere of any known moon in the solar system, making it the most likely planet for life to form.

The interactive experience of the lightning storms on Venus 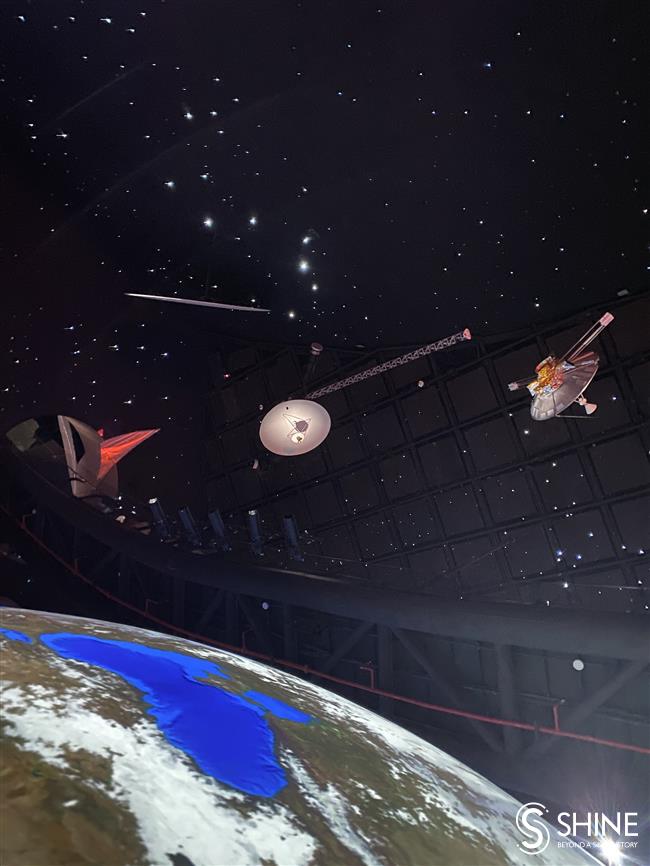 The "planets" look real thanks to the light and shadow of virtual reality projectors presenting different pictures from different angles.

Another highlight of the "Home" exhibition zone is about 70 pieces of the museum's collection of meteorites.

They include the largest recovered piece of the Changxing Meteorite, which fell into Shanghai's Changxing Island in 1964 and destroyed a farm house. It was the only meteorite seen to fall in Shanghai.

There are even microscopes for a closer look at different meteorites. 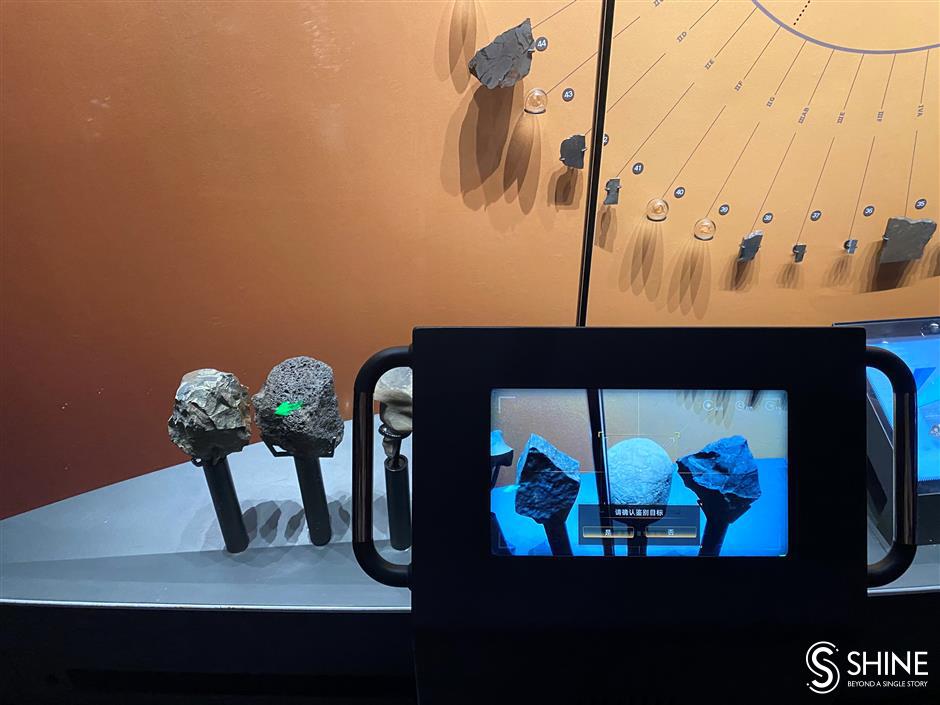 Don't forget to make an appointment through the museum's official WeChat account for a "Flying across the Galaxy" ride, my favorite of all the interactive experiences. Equipped with 6-DOF platform and 6K double curved screen, this interactive "spaceship" offers you the weightless and immersive experience of an interplanetary flight.

The "Flying across the Galaxy" ride

Going upstairs, the "Cosmos" exhibition is reached by leaving the "Home" display and walking through a long "interstellar" passage featuring an immersive and interactive art projection of a river of stars that flows with people's movements.

A passage featuring an immersive and interactive art projection of a river of stars that flows with people's movements.

Instead of highlighting straight facts, this exhibition poses a number of questions, such as What is the universe? How big is it? What is the essence of gravity? How is distance between stars measured? What is dark matter? The answers are presented through interactive exhibits to make it easier for people to understand them.

There are also some interactive experience in this area, such as electro-optical distance measuring, identifying the nebula. But it's more suitable for children to experience to get some astronomy knowledge.

I was attracted by a series of special decorations of black holes, where you can "see" the spacetime distortions with your own eyes. 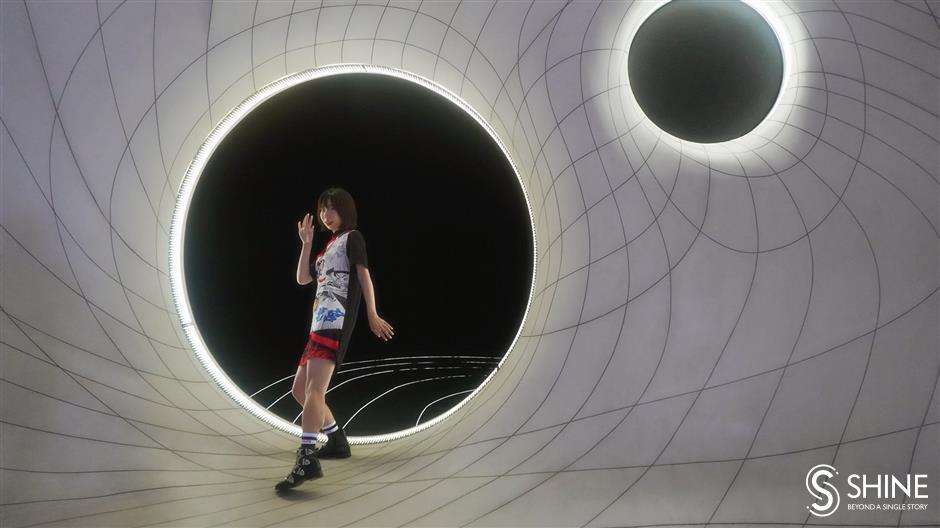 Fiona Li poses in front of a special model of black holes.

Then you will step in to the third exhibition – Odyssey. This features a historical narrative to guide visitors through the advancement of knowledge about the universe and efforts in space exploration.

The highlight is a section on China's most recent space projects, featuring full-scale models of the Yutu lunar rover, Tianhe core module and the Chang'e-5 spacecraft, along with a 9-milligram lunar sample brought back by the Chang'e-5 mission. 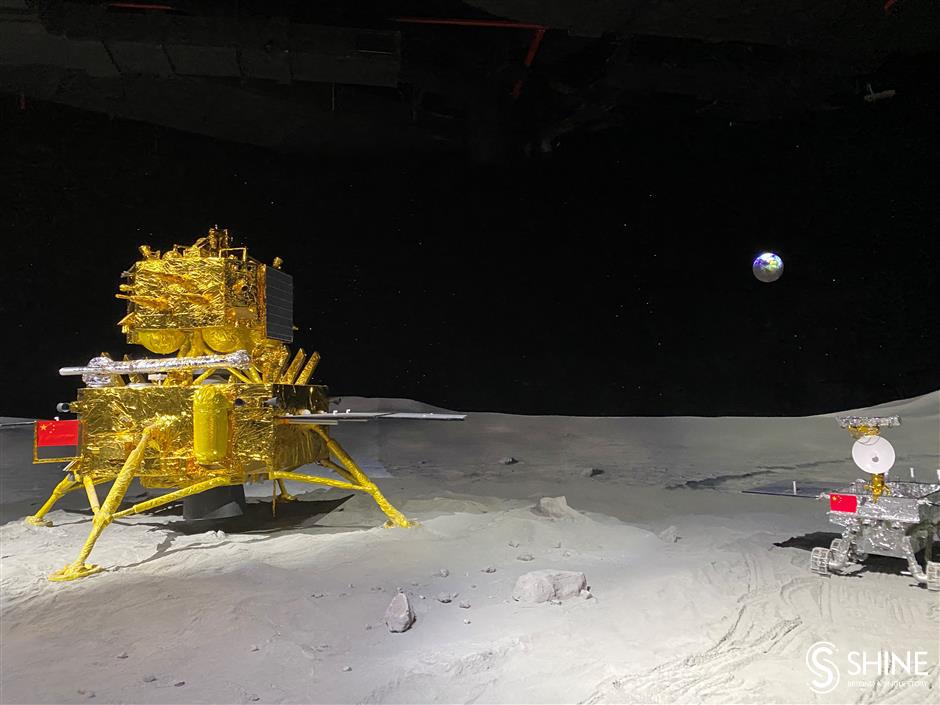 The model of the Chang'e-5 spacecraft

The VR Moonwalk beside the Chang'e-5 spacecraft needs an appointment, and has a weight limit: Participants need to weigh between 45 and 75 kilograms. Also, it usually has the longest queue of the whole museum. Using visual reality equipment, you can become an astronaut and experience the surface environment of the moon.

Everyone will be excited to see the Tianhe core module – of course, the real core module of Tianhe is already in the sky. What lies in the museum is a full-size model of it. But walking into the core module is quite interesting. You will learn about the life of an astronaut after seeing their working place, their workout and sleeping area, as well as their food reserves in rich varieties. It also provide some interactive experiences, such as operating the spaceship by remote control handle.

My space trip ended at an overpass across the "universe" – above the "Home" exhibition zone, as a way of returning to earth.

Note: The coffee shop in the museum is a little expensive, but the souvenir store is worth checking out. I bought some beautiful planet fridge magnets, 15 yuan each.

An overpass across the "universe" 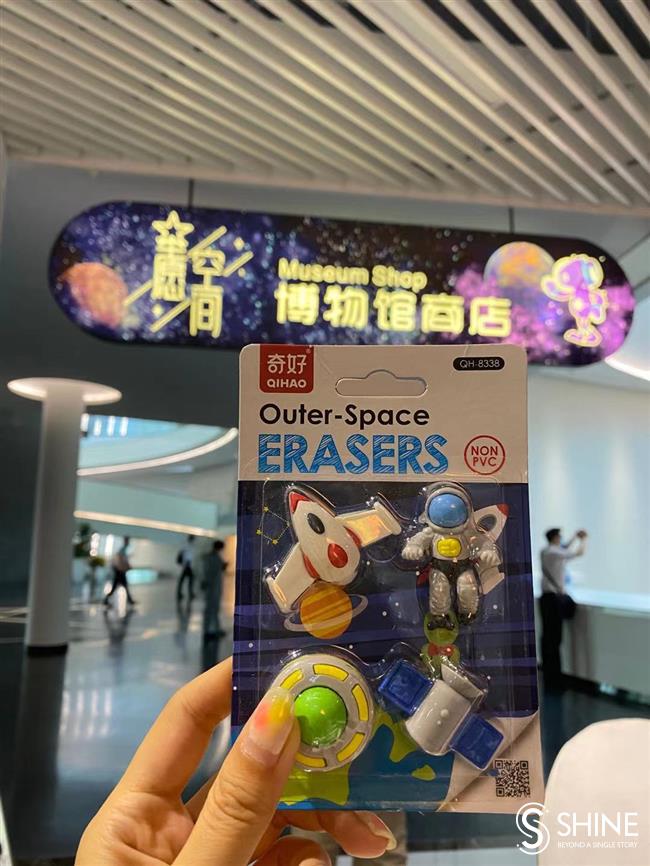 Souvenirs inside the museum shop

Astronomy details of the building

The building's ingenious design using astronomy is worth a look.

The roof of Shanghai Astronomy Museum was designed to be an inverted dome. Under the roof lies a 200-meter-long, 720-degree spiral staircase, which represents the spiral arms of the galaxy.

You'd better explore after finishing the three displays, which will close before 4pm.

The 30-meter-in-diameter dome cinema is located in one wing of the museum, "floating" in the air with minimal visible support, giving an impression of weightlessness or zero-gravity when visitors approach it. The cinema is equipped with a huge 8K screen and has an audience capacity of 200. The cinema ticket is priced at 40 yuan (museum ticket is also needed.) Watching a movie inside will be an unforgettable experience.

You can find this scientific equipment as soon as you step into the entrance. The device was invented in Paris in 1851, and was used to prove that the Earth is rotating.

Good to know before you go:

* People can buy tickets via the museum's official website (www.sstm-sam.org.cn) or WeChat account (gh_f1afa6047afc) seven days ahead of a visit. One ID card can only buy one ticket at one time. Be aware that when buying tickets visitors have to choose when to visit – morning (9:30am-12:30pm) or afternoon (12:30pm-3pm).

* Real-name reservation is required for all. Every visitor is required to wear a mask and show their health green code.

* Visiting hours are between 9:30am and 4pm, Tuesday to Sunday.

* The museum is located on 380 Lingang Avenue. Metro Line 16 is the best route.