The cut and thrust of old-fashioned city barber shop

Through a window obscured by privacy film, I can vaguely make out a barber's pole with a helix of red, white and blue stripes spinning above a piece of A4 paper bearing the Chinese characters for "haircut." It's a rinky-dink little barbershop on Caodongsan Road in Xuhui District.

"It doesn't matter that the signage is not all that obvious because the people who come to my shop are all regulars," says Li Jinfang, 65, owner of the barbershop. "If the barber's pole is spinning, it means that I am open for business." 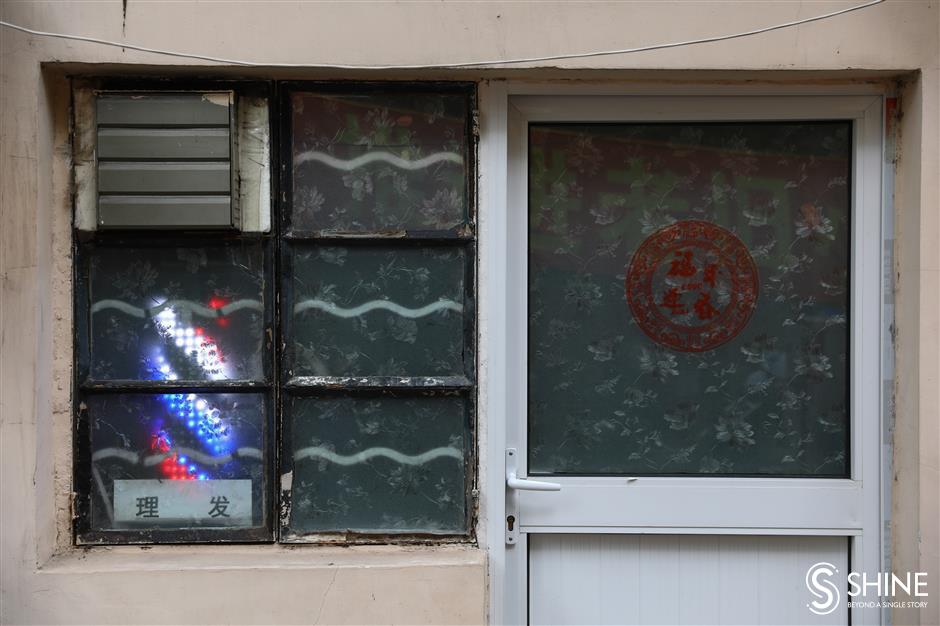 If the barber's pole is spinning, it means Li is open for business.

There is no Tony, the name adopted by many young barbers in China, no VIP membership club and no modern facilities like backwash shampoo beds. What this down-at-its-heels, small shop has is one hairdresser, two barber chairs, a wash basin and a TV.

What décor there is reflects Li's personal memorabilia – dowry camphor chests, a wooden cabinet holding up her daughter's graduation photos and an award certificate under glass. But what this shop lacks in presence, it more than makes up for in the human touch.

Li opened the barbershop in her house on the first floor of an old building 22 years ago. Before that, she was a hairdresser at a state-owned hair salon near Longhua Temple, not far away from today's location.

"After graduating from middle school in 1974, I was designated to be a hairdresser," says Li. "At that time, we had no choice. Although I sometimes felt awkward as a female hairdresser when I had to shave the faces of elderly men, my ambition to succeed drove me on."

Face shaving, or xiumian, is a traditional service hardly ever offered in today's hair salons. The craft uses a razor blade to remove whiskers and other facial hair from cheeks, chin, upper lip and sideburns.

"My eyesight is not as good as it was in the past, so I seldom perform that service for customers, except for patrons who have gotten shaves here for decades," says Li. "They are very tolerant. Even when I nick them during shaving, they don't blame me." 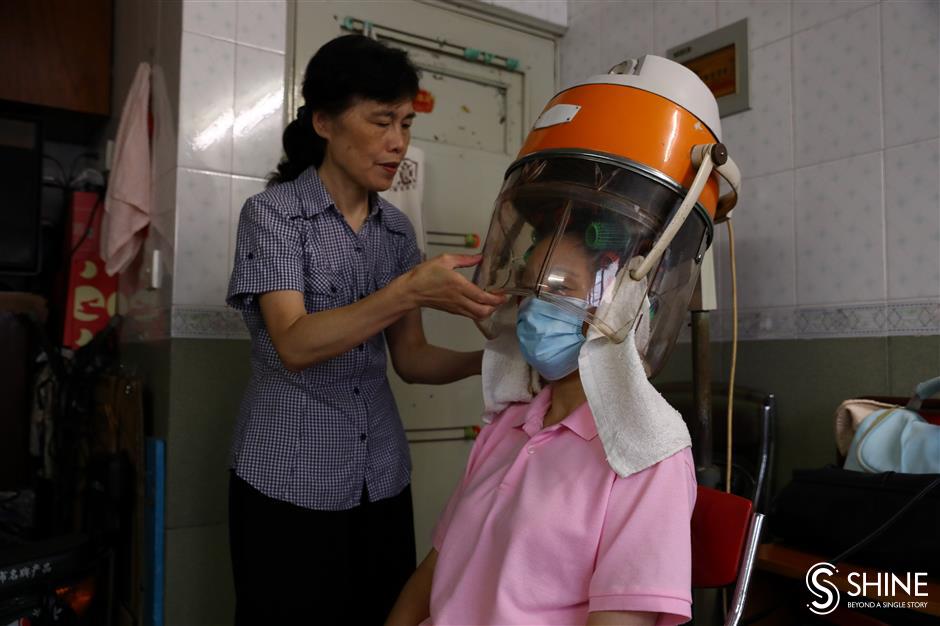 Li uses a traditional perm hair dryer for a customer. 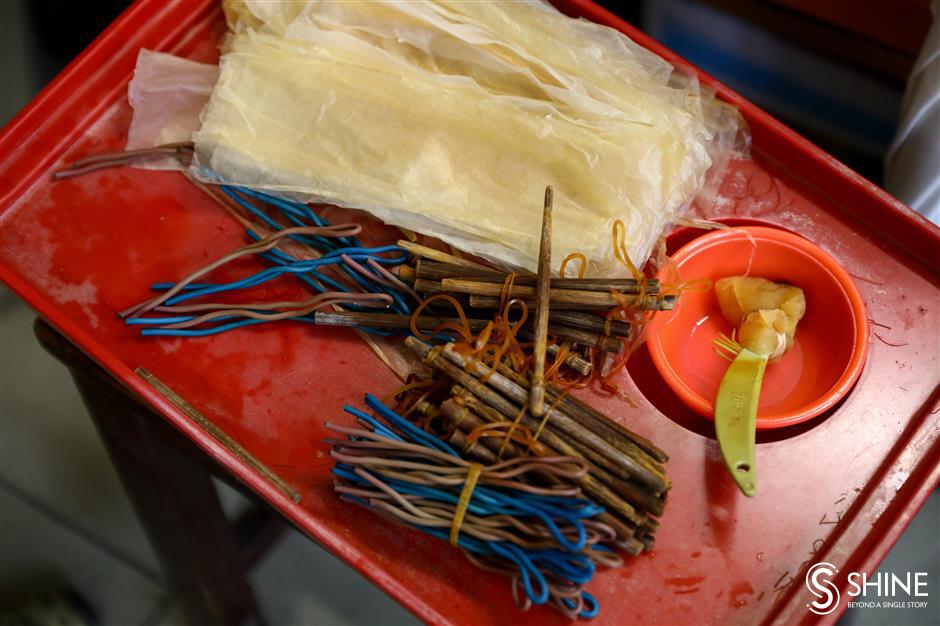 On the day I visit the shop, Li is busy giving a hot oil treatment to an elderly man sitting in a white, metallic barber chair covered with a leather cushion. A notation on its foot pedal records that the old chair was made in Shanghai some 100 years ago. Li inherited it from down the ages.

"I once replaced the old chair by one with a trendy hydraulic pump," Li tells me. "However, my customers, who were mainly old-fashioned, elderly people, disliked it, so I switched back. And to think I almost sold the old chair to a waste collector!"

Back in the old days, barbershops pretty much everywhere in the world were as much social as practical. If you wanted to know what was going on in a neighborhood or test the winds of prevailing public opinion, a barbershop was a mine of information.

In Li's shop, some of that old tradition remains.

"Some people come here to share family gossip or simply pour out their woes," Li says.

On this particular day, an 81-year-old woman surnamed Wu has come into the shop – not for a haircut but for a chinwag. She's been coming into the shop for more than 20 years.

"When I first came here, my granddaughter hadn't been born yet, and now I have great-grandchildren," says Wu.

Wu lives alone. Her chitchats with Li relieve the boredom of life. But her health is failing, so she tends to show up nowadays on her way back from hospital appointments.

"The customers and I are like friends," says Li. "Once I closed the shop for several days to take care of an ailing family member, I received many calls from concerned regulars. I was very touched." 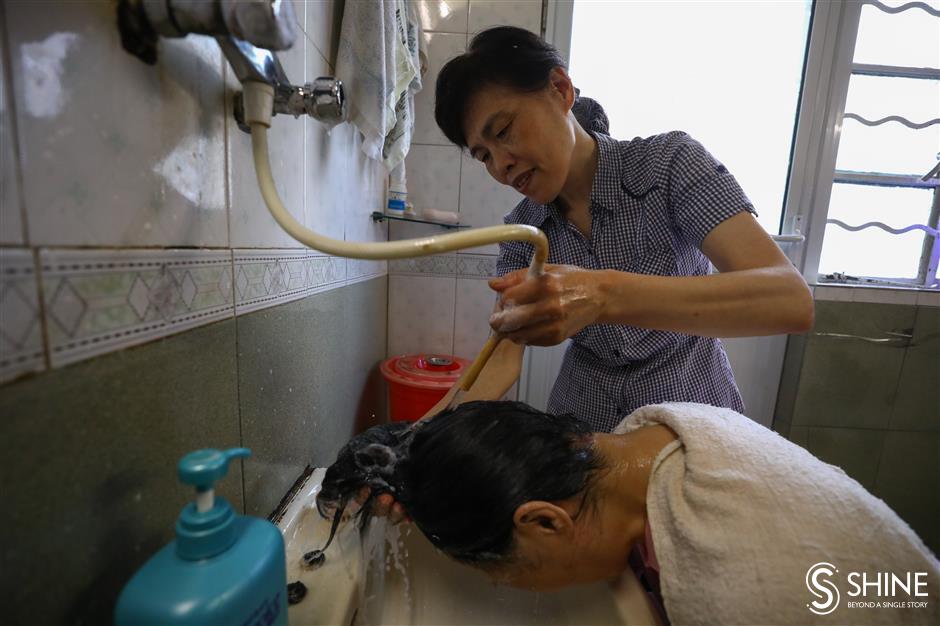 A customer bends over a sink to get hair washed.

A 67-year-old woman surnamed Dong comes into the shop for a haircut. Li doesn't need to ask how she wants it cut. She knows the preferences of every regular customer.

To get a layered, fluffy look, Li uses a pair of scissors over a comb and then a blade to pare the hair ends. Job complete, Li uses a mane brush to dust loose hair from Dong's neck and applies powder there.

"I trust Li very much," says Dong. "She always gives me the perfect hairstyle."

Customers are allowed to get haircuts without the added expense of washing. They can also bring in their own hair oils and dyes. The standard price of a haircut is 20 yuan. A hot oil treatment costs 60 yuan, which is fairly cheap in the city center.

"Before the pandemic last year, the basic haircut was priced at 15 yuan," says Li. "Oddly enough, it was my customers who suggested that I increase prices. Hair salons nearby have all raised their prices, so out of market fairness, I did, too. However, for me, making money is not that important."

During my stay in the shop, I meet three customers. All of them ask Li the same question: "Have you found a new location?"

It's a dilemma for Li. The old buildings in the neighborhood are going to be razed for an urban renewal project. Since her income is so small, she can hardly afford prevailing rents in the area.

"It would be much more relaxing if I just shut down the barbershop and retired, but I can't do that," says Li. "Where will my elderly clients get haircuts? Some of them have tried modern hair salons, where they were treated callously by young staff who weren't familiar with old-fashioned hairstyles and didn't want to bother with old folks who would never buy membership cards."

But Li has a solution.

"I have promised to customers in their 90s that I will provide home services for them if my barbershop has to close," she says.