Early last year when Ankit Kawatra was in Manila for business, he struggled to find a decent cafe or a restaurant where he could connect to Wi-Fi and quickly run through his e-mails and messages.

In venues that did offer local area wireless technology, finding a quiet space to do his work posed another challenge, not to mention poor connectivity issues and even loud music.

The inconveniences during his stay in the Philippine capital set him thinking.

"I figured there had to be a platform that pooled in all these places together so that we could check our closest options and reserve places accordingly," said Kawatra. 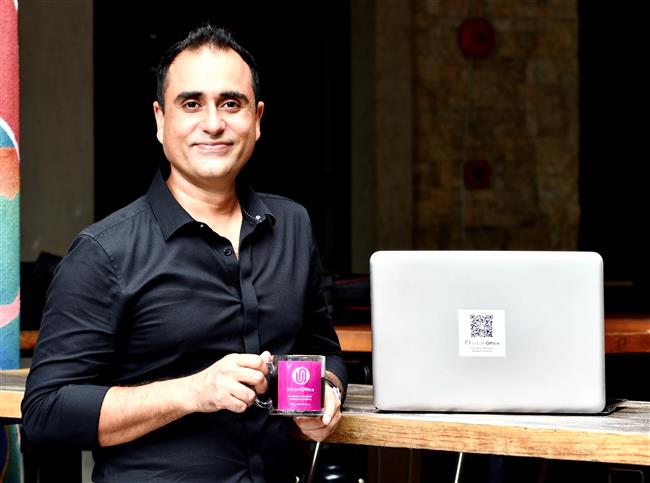 The Indian entrepreneur, who is based in Shanghai, floated the idea to the owner of a popular restaurant on Julu Road. The eatery agreed to put up a board "offering co-working space with unlimited coffee for as little as 20 yuan (US$3) for half a day or 35 yuan per day."

The "space" was restricted to weekdays and during working hours. Comparisons with WeWork, the American startup that also provides shared workspaces, were inevitable. But Kawatra saw it differently.

"Compared with co-working spaces like WeWork, we don't require a commitment of monthly payments and have more venue options," he said.

The trial run turned out to be satisfying for both Kawatra and the venue. Seeing the early response, Kawatra bet on its potential and persuaded more restaurants and other establishments in the city to sign up for his project. With a few outlets onboard, Kawatra launched an online platform in Shanghai in April this year.

On www.urbanoffice.cn, netizens can book a desk or a meeting space, with guaranteed Wi-Fi, a charging station and unlimited tea or coffee for economical prices.

"Shanghai is giving a big nudge to the IT industry now, so it was the right place to start this venture. Naturally, I expected to find more support and acceptance for the idea here than in any other locations," Kawatra told Shanghai Daily.

"The plan is to perfect the model in China, essentially in Shanghai. Initially, we thought it would be challenging to persuade the owners, but we were pleasantly surprised ... they were quite open and accommodating to the idea. Now we have some unconventional places like yoga and wellness centers contacting us."

As the idea caught on, it seemed to work for everyone involved. The venue owners welcomed the extra revenue generated in the emptier time slots that helped in supplementing the city's high real estate rental prices, while the customers profited from the flexible but stable co-working space.

Three months after Kawatra launched the website, more than 30 venues signed up, averaging two to three users a day in a single venue. The site's WeChat account has more than 500 followers.

Architect Lin Ranhao discovered the platform last month and tried out three different venues. He was introduced to the site by his American customer who had booked a desk for a meeting. Lin was instantly drawn to the concept.

"I redesigned my two-bedroom apartment last year shortly after the pandemic broke out, mainly turning half of my living room into a workspace. But once in a while, I need a change of environment to give a boost to my brain," Lin said.

"I used to go to some chain store bistros or cafes but they are often crowded or loud, and the coffee was costly ... If I sat there working five or six hours, it felt awkward having just one cup of coffee," he said, suggesting a likely new challenge to multinational chain of coffeehouses.

Lin had a point. Several types of research have shown that an occasional change in the work environment or a new setting can influence people's behavior and motivation, generally helping in productivity.

"Increasingly, we have seen people do not want to be confined to that small space we call the office," Kawatra said.

"You will be surprised to know how many companies want to use our meeting space because they don't want to do their presentations or team building in their conference rooms. They are happy to take the team for a day out. And that goes too for the many individual users as well who book a desk."

According to Kawatra, about 70 percent of the current website users are expatriates. The site is bilingual in English and Chinese, and he is keen to tap the local Chinese customers with an increasing number of them turning to freelance and shunning regular jobs.

"The freelancers would be the key to the local market," he explained.

Indeed, the pandemic has altered traditional work patterns in the country with the number of freelancers soaring.

Kawatra is looking to expand "his vision" and include venues on the city outskirts while also eying the markets in cities like Chengdu and Hangzhou.

"Initially, we thought that only tier-one cities would be interested in this idea, but a lot of companies, who are using our spaces in Shanghai, have told us that in tier-two and tier-three cities, with fewer people, and oftentimes, with no big offices, they are most likely to welcome the idea of desk space," he said.

For now, Kawatra is not limiting himself to expansion alone. As more outlets subscribe to his idea, he intends to offer additional services to his customers than just plain tea or coffee. Some venues are already offering Urban Office special lunch menus.

A mobile app is also in the works along with a similar website for the Philippines – where the idea originated.