Opening an on-site art gallery is not the only thing Shanghai Mental Health Center has done to attract public attention to mental illness and those who suffer from it. Recently, the center became a hot online topic due to its creative mooncakes, a seasonal delicacy of the Mid-Autumn Festival.

Mooncake pre-orders at the hospital's staff canteen began last week, even though the festival, which falls on September 21 this year.

The custom-made mooncakes have SMHC's title and logo and an abstract illustration of the human brain printed on the crust of the mooncake. The flavors include traditional Guangdong-style red bean filling and Shanghai-style fresh pork, as well as snowy mooncakes with soft centers, including milk and cheese, apple and plum and peach oolong.

Though mooncake sales are limited to hospital staff, they have become an overnight Internet sensation.

Liang Yan from SMHC's logistics department attributes the sensation to the hospital's long-term work to promote awareness about mental health issues around the country and its dedication to reducing the stigma and discrimination against those with mental illness.

"Our hospital makes mooncakes for our staff every year, but this is the first time we've printed our logo and name on them," Liang said, adding that she's thrilled to see the public's positive reaction to the mooncakes.

Netizens talked about their understanding of the mental health center, and praised its efforts to draw public attention and care to people who suffer from mental health problems.

Some netizens call the product "mental mooncakes," and some joked that they would make a medical appointment only to buy one.

"We designed this year's mooncakes by ourselves. The mooncake's specialty is manifested in the printing of SMHC's name and logo on the crust. I think the overnight sensation contributes to our hospital's influential image in this field as well as people's increased attention paid to mental health issues," said Liang, adding that the original idea behind the mooncakes is simply to support the center's hardworking front-line medical staff, especially during the pandemic.

"The popularity of the mooncakes may look like an accident, but it's an inevitable trend," said Qiao Ying, a deputy chief physician at the hospital, who was quoted in a media report. "People of all ages have (mental health) needs, and we are fulfilling those needs. The importance of mental health awareness has risen in particular due to COVID-19." 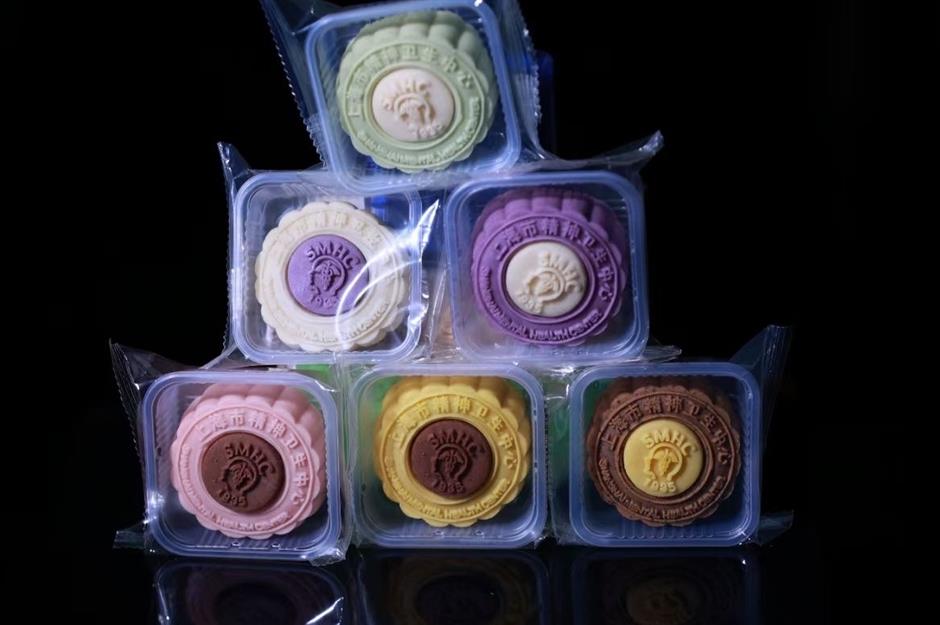 The flavor includes traditional Guangdong-style red bean fillings and Shanghai-style fresh pork, as well as snowy mooncakes with soft centers, including milk and cheese, apple and plum and peach olong.

Special Reports
﻿
SMHC makes specialty mooncakes to raise mental health awareness
Reduce your carbon footprint and step up for low-carbon living in Shanghai
Restaurant tables double up as desk workspace
Karaoke bars lose sway as life of the party
'Psychological trap:' You pay your money, you take your chances
Some of us see the world in a different light
Motivated by unknowns
Charmingly rustic cottage in paradise
Library among the paddy fields brings books to the countryside
A simple guide to changing your drivers' license into a Chinese one
EXPLORE SHINE