You can enjoy a ski run in the city, even if the snow isn't real

Shanghai a venue for winter sports? Duh. In a city where any snow is rare and heavy snow is non-existent, strapping on a pair of skis is most unlikely. Or is it?

As the Tokyo Olympics head for the history books, all eyes now turn to the 2022 Winter Olympics. The Games will be held in a country not generally known for winter sports. The host city is Beijing.

Ski magazines, tourism operators and winter sports aficionados are predicting the Games will catapult a fledgling industry into a big market.

Yu Le, a former professional skier, is certainly hoping that's true. She runs an indoor ski center in Shanghai, where people can hone their skills on ersatz snow. 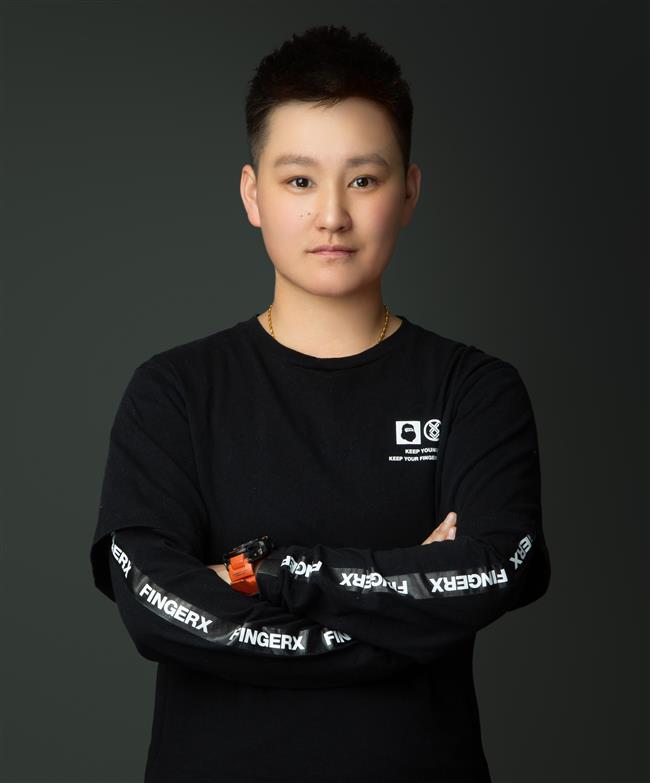 Yu was born in the northeastern province of Jilin, one of the places in China where ski resorts do exist. So why is she promoting skiing in Shanghai?

"It's much easier to make money here," she says candidly.

Yu has been running SH Owns Winter, known as S.H.O.W., since January. The indoor ski center is located in the Guojin Sports Center in Jiading District. It's a bit far from the city center but not that far – four stops from Jinshajiang Road Station on Metro Line 13 in Putuo District. 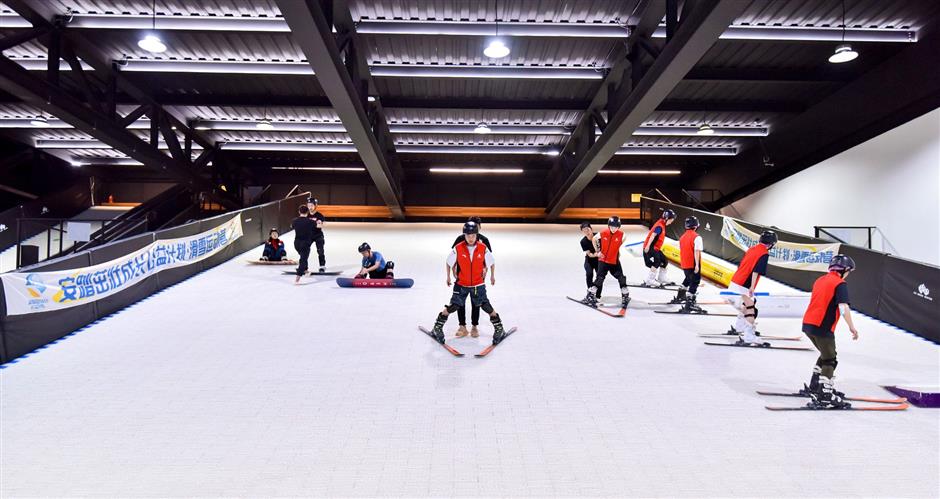 S.H.O.W. is an indoor ski center, where people can hone their skills on ersatz snow.

The center offers three levels of skiing. For beginners, there is a simulation machine that resembles a huge, sloped treadmill. It helps the uninitiated learn how to balance on skis and avoid falls.

For intermediate skiers, there's a sloped ski track. For the more experienced, there's a foamed track for ski jumps.

The snow in the center is made of plastics that resemble needle mushrooms. They provide a slipperiness and resistance similar to real snow.

"Because there is no snow here in Shanghai, this market is like a whole cake waiting to be divided up," Yu says. "The 2022 Winter Olympic Games are an advantage for us amid a lot of promotion about winter sports. The public's interest is very piqued."

Most of the pupils at S.H.O.W. are teenagers or younger, with a sprinkling of adults, some of whom have been practicing with Yu since she first came to Shanghai. 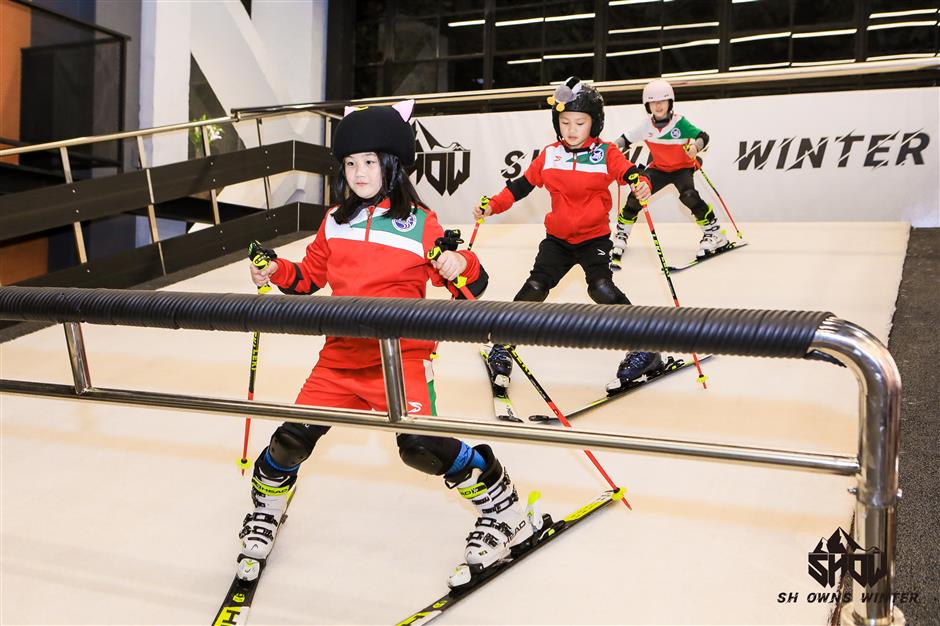 Most of S.H.O.W.'s fledgling skiers are children around 10 years old.

Before starting her business, Yu, 29, was a professional skier and then a coach. As a young girl she was very athletic. She was selected by a long-distance running coach for training when she was at primary school, but she quickly decided running was not her thing.

"The training was really tough and boring, so I quit that to take up skiing," she says. "I thought it would be exciting and easier to achieve something."

Back then, in about 2002, skiing was not a widespread, popular sport in China, even in northeastern provinces where conditions are ripe.

According to Daxue Consulting, there are an estimated 770 ski resorts in China, though most are small and lacking modern lifts or other facilities. That is expected to change.

"China is projected to become the largest winter sports market, with people participating expected to reach 50 million by 2025 and 1,000 ski resorts to be open by 2030," Daxue said in a January report.

China Highlights, a travel guide, said ski resorts are mainly located in four areas: around Harbin, around Beijing, around Chengdu, and in remote northern areas of Inner Mongolia and Xinjiang.

It listed among the top resorts: Yabuli in Heilongjiang Province, Zhangjiakou near Beijing and Changbaishan International Ski Resort in Jilin.

Indoor ski centers have become popular around the world, often in unlikely places such as Dubai, Singapore and the Netherlands. Most of them use machine-made snow on slopes of varying length and steepness.

Yu had no need for such facilities when younger. She lived in an area of China blessed with snow and mountains. She became a professional skier, participating in provincial, national and international competitions. When she retired, she became a skiing coach.

In 2010, Yu came to Shanghai and worked at the Yinqixing Indoor Ski Field in Minhang District, the first such center in the city. It closed down not long after she joined the staff. But the legacy of Yinqixing left skiing in the minds of the public.

Yinqixing used snow machines to make real snow, 30-50 centimeters deep, and featured three ski tracks and a huge platform for beginners. The temperature in the venue was kept under minus 2 degrees Celsius throughout the year.

Jeremy Guo, now 30, still remembers when he first went to Yinqixing as a teenager. His cousins took him to the venue during a summer holiday to "chill out."

"Before Yinqixing came into being, I never thought that you could ski in Shanghai," recalls Guo, a sales manager. "My family and friends all thought that you had to go to the mountains in wintertime to enjoy the sport, and that meant time and money."

Guo had never been on snow before. He found the experience exhilarating once he got over the initial setbacks.

"My first time on the snow was just me falling over all the time," he says. "There was a machine there to lift you to the top of the 'slopes,' and there were long lines. But still, it was a memory that I cherish very much."

Yinqixing was the starting point of skiing for Guo.

"It was almost a decade before I wore ski boots again," he said. "Since then, I have become a regular skier at various resorts almost every winter."

As the only indoor ski center in the city for a long time, Yinqixing was an icon for the trendy lifestyle in the city. However, when Yu became a coach there, the venue was on the skids.

"As far as I know, part of the roof collapsed and the repair costs were huge," Yu says. "The center had been running for quite a long time, and the facilities needed updating. It was all beyond the owners' finances, so the center was shuttered." 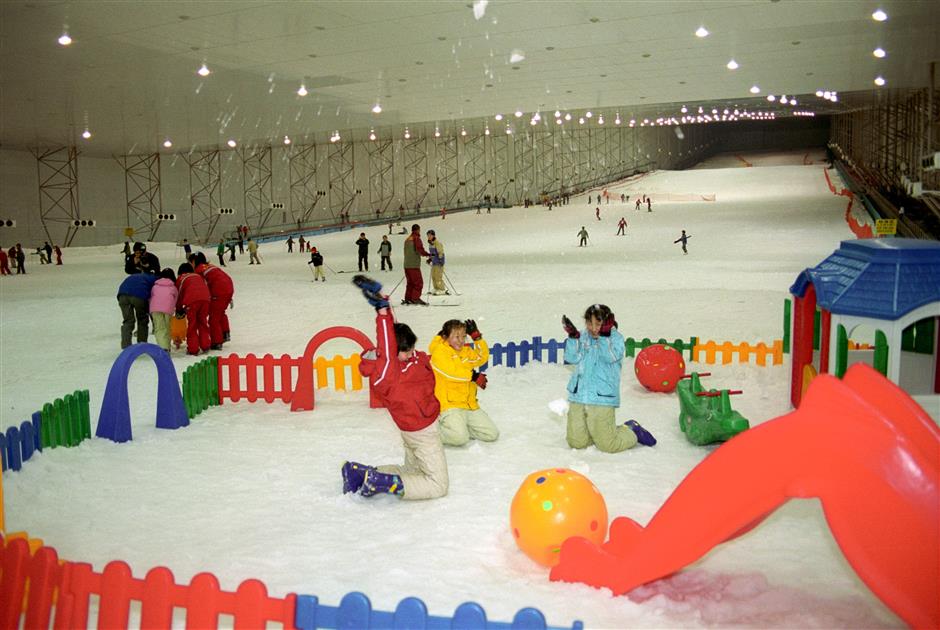 Yinqixing Indoor Ski Field, now closed, left many happy memories for those who once skied its slopes in Shanghai.

But the idea of leisure skiing in Shanghai didn't die out with the demise of Yinqixing. Today, indoor ski centers, both large and small, operate in several districts. Most of them provide just ski simulation machines because it's difficult to find a venue of sufficient size in Shanghai to support sloped ski runs.

Yu's business has been thriving. S.H.O.W. will soon open a second branch in Songjiang District and has plans to expand into neighboring provinces.

"I wanted to challenge myself," she says, explaining her switch to entrepreneur.

Most of her employees are former colleagues and teammates from her days as an athlete.

"It was huge change for me," she says. "Before, as coaches, all we had to worry about was how to deal with our bosses. But now we are a business team, and it's all very different."

Could Shanghai host a grand ski field that provides real snow? The answer is probably yes.

In fact, a new resort is now under construction near Dishuihu Lake in the Pudong New Area. The project has been in preparation for years, and no doubt, the 2022 Winter Games afford an ideal time to open.

Yu will be a referee at the Beijing Winter Olympics. She says the Games will be an opportunity for not only her business also for the development of winter sports in China.

"I want to popularize skiing as much as I can," she says.