Discover the thrills and spills of life under the sailing mast

Never go sailing because you have no experience? There is a center in the city to fix that for you – Shanghai Yacht Club & Camp – where you can practice sailing and don't even need to be a club member. 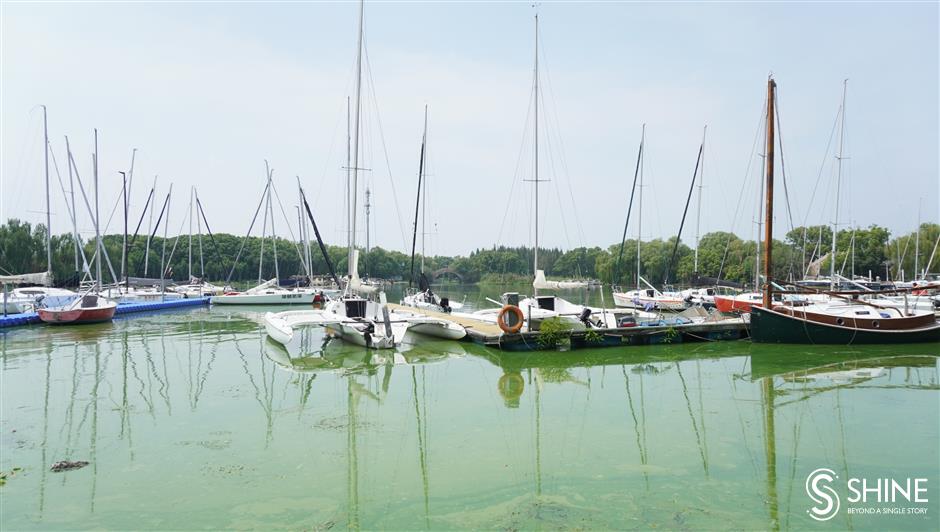 The sailing boats in the dock of Shanghai Yacht Club & Camp

Founded in 2004 and one of the earliest sailing clubs in the city, SYC is also the first private enterprise that has helped establish and operates a national team for the Nacra 17 and 49er classes in Olympic sailing.

This year, Yang Xuezhe and Hu Xiaoxiao represented China in the Tokyo Games in the Nacra 17 foiling class.

It's fun to wander into a training center for Olympic athletes, and take sailing classes. So here is a guide. 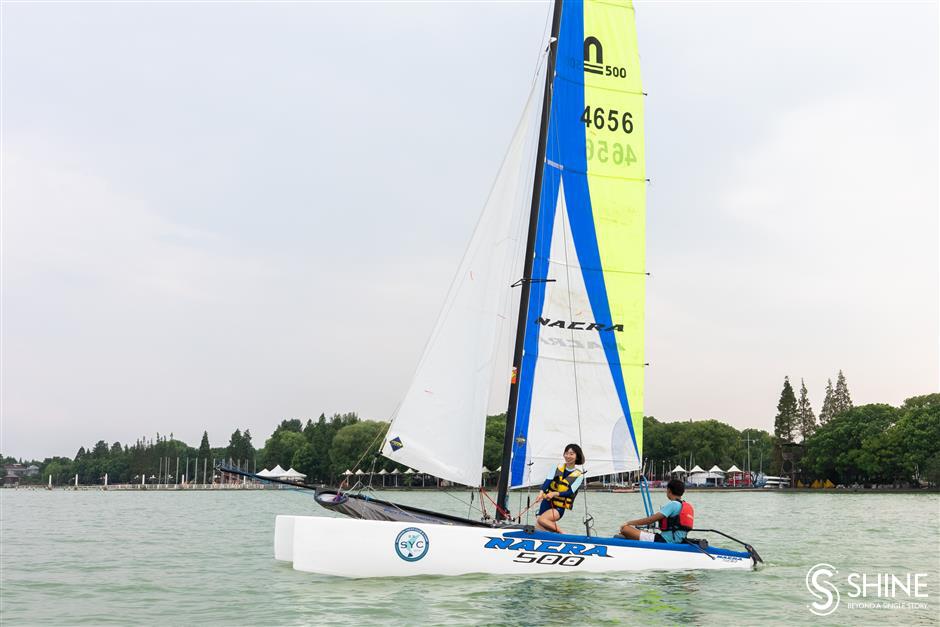 Shanghai's Qingpu District is a favorite spot for sailors. Located in the westernmost part of the city, it is dotted with many rivers and lakes. The city's largest freshwater body, Dianshan Lake, is located in the district and it's home to the club.

The 62-square-kilometer lake is ideal for amateur sailors to practice.

In 2017, the lake town of Jinze was recognized as "the town of sailing" by the General Administration of Sports of China. It sits on the border with Jiangsu Province and is free of rampant commercialism.

The location of the club used to be part of Shanghai Daguanyuan, known as a replica of the magnificent garden of an imperial family described in the popular Chinese novel "A Dream of Red Mansions" by Qing Dynasty writer Cao Xueqin (1715-1763).

The place once housed an obsolete tourist attraction themed on an ethnic village, and all the original architecture and plants have been carefully maintained.

When I walked into the club, I found some paifang (memory archway) on the way. The theory-course classes are held in a Chinese traditional ethnic courtyard house.

With tall cedar trees, a grand lawn with a stunning lake view and hundreds of sailboats at the dock, it is an ideal place to camp. 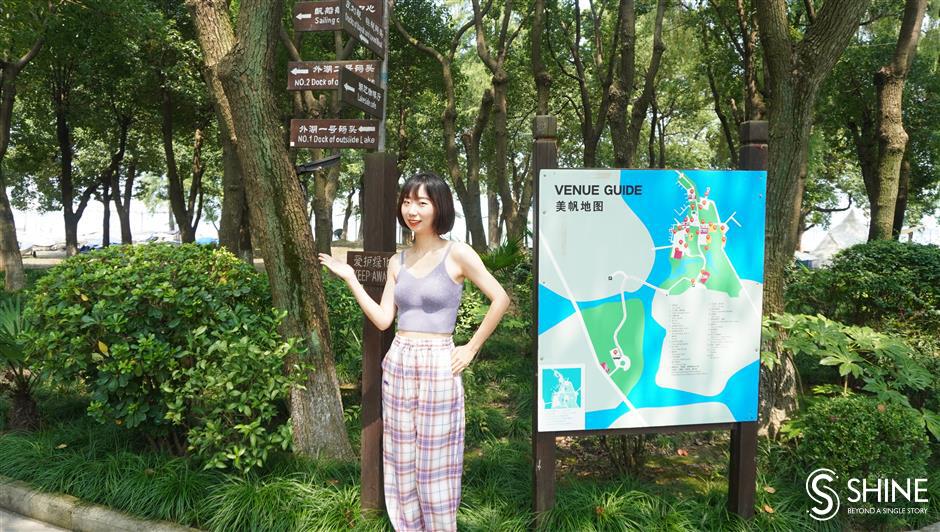 My class started with a sailing simulator which looks like the rotating base of a sailboat. It is used to learn the parts of the boat and practice basic maneuvers, such as getting familiar with wind direction and adjusting sails to maintain a certain angle to the wind.

"Everyone needs to start from a single sailboat," my sailing coach, Ye Hong, the leader of China's Nacra 17 sailing team, told me. "The basics of a sailboat mainly include a mast, sail, a tiller to steer, and the centerboard, which can transform the lateral force into a forward force and is the main difference between a sailboat and other boats."

"The Nacra boat is much larger and faster than any other sailboats in the Olympic Games, and it's a very new event," Ye added. "The Nacra 17 is known as the 'Formula One on water.' In addition to its speed, the boat is the most expensive of all Olympic sailing boats, costing more than 300,000 yuan (US$46,500)."

The Mixed Multihull made its Olympic debut at Rio 2016, and when the wind and waves are up, the Nacra 17 is the fastest of Olympic boats. Furthermore, it is one of the three Olympic sports where men and women compete directly against each other in a single team. The others are tennis and badminton.

In 2018, SYC co-built a Nacra 17 national team with the Chinese Yachting Association, aiming for the Tokyo Olympics. After three years' training, this very young team won a ticket to the Olympics in the 2021 Asian Sailing Championships, marking China as one of the most competitive countries in this field.

I got the chance to experience Nacra sailing with Xu Tianying, a professional SYC sailor. It's a team pursuit, with one helmsman and one crew. What is vital is that the helm and crew work in complete harmony, keeping this tricky twin-hulled seesaw in balance at all times.

I was Xu's crew, helping to pull the jib. Luckily it was not windy that day, so I was successful on my first sail. That really made me feel accomplished.

Actually it isn't that easy. "It will be very hard to control the jib and the mainsail of a Nacra boat when you are sailing fast downwind. It requires a lot of training." Xu said. 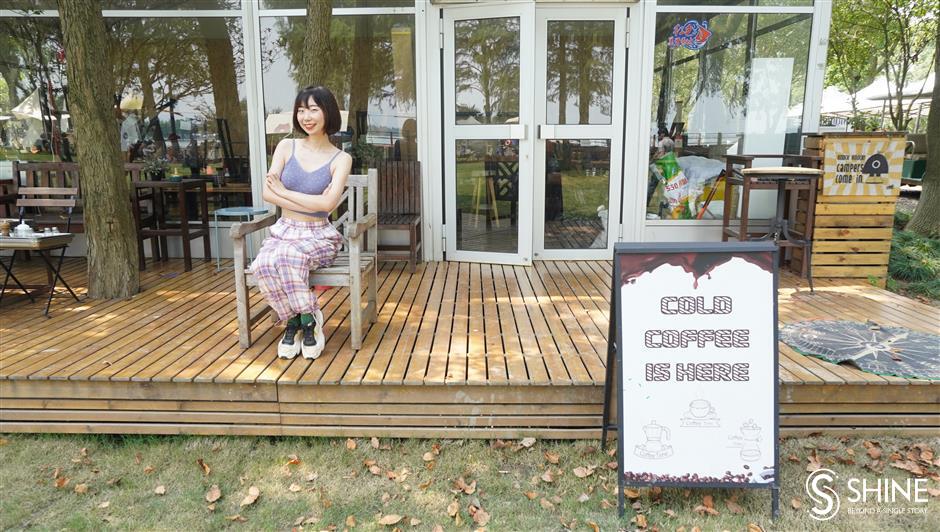 Fiona Li takes a break inside the club.

Once dubbed the "sport of kings," sailing has now become popular.

Today, SYC owns about 300 sailboats, the most of all clubs in eastern China, and they are all available to club members. SYC provides a full experiential program for interested people, from theory and knowledge to real practice.

The activity is open to all people except for small kids and the elderly. An hour's experience costs 300 yuan.

SYC holds a sailing summer camp every year, hoping to attract not only experienced children, but also zero-based players. The summer camp focuses on cultivating interests and popularizing sailing to the public.

At the same time, there are weekend training classes for those who want to develop further sailing skills. The training classes are divided into three levels for different skill sets: primary, advanced and competitive.

For the sailing enthusiast, SYC also provides training courses for the International Yacht Training Certificate. Those who earn the certificate will be recognized as a qualified sailor, and can borrow yachting equipment worldwide.

Besides sailing, there is a whole range of other water sports available, such as kayaking, canoeing and dragon boating. Visitors can choose to participate under professional guidance, take a training course given by coaches, or simply attend a BBQ party and relax with friends on the green.

If you have a fear of water, there are also land-based activities, like pétanque and beach volleyball. 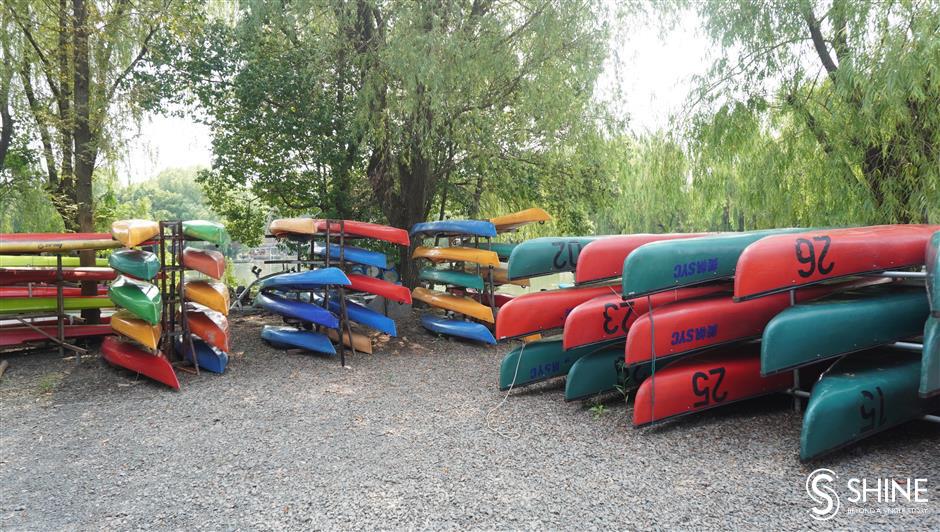 Some kayaks are piled at a corner.